What’s the best way to understand what the Giro was like fifty years ago? Simple, ask someone who raced in it. PEZ decided to do just that. Vito Favero finished 2nd in the 1958 Tour de France, and won the 18th stage of the ’59 Giro.

It’s the 92nd Giro d’Italia this year, but 100 years since the first edition was run in 1909. It seemed like the perfect opportunity to look back half that time to fifty years ago for the 42nd version in 1959.

Trying to recount the Giro from that era seemed like a tough task for PEZ so we came up with an idea brilliant in its simplicity: find someone who was there and ask him to tell us about it. Connections at the heart of Italian cycling were mobilized and PEZ was privileged to speak with one of the favourites for that year’s race: Vito Favero.

Favero started his pro career in 1956 and rose to prominence in the 1958 Tour de France where he placed second, just 3 minutes behind Charly Gaul, and wore the yellow jersey for six days – tantalizingly close at the finale of the race to taking it overall.

With that reputation, Coppi himself had reportedly put Favero fourth in his list of favourites for the 1959 Giro behind Jacques Anquetil, Gaul, and Gastone Nencini, the Giro winner in 1957 and with two stage wins in 1958. Ercole Baldini had won the 1958 Giro for Italy and also the World Championship that year, so he was highly rated as well.

So who better, than Favero himself, now 76 years of age, to tell us all about that great year of Italian racing. He was very generous in welcoming PEZ into his home to talk cycling, but was very modest about his powers of recall. 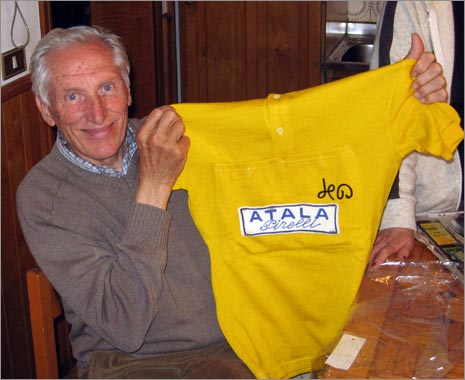 Favero shows off with the jersey he wore in the 1958 Tour.

“I almost forget everything about the Giro 1959, and I have to say that I’ve forgotten a lot of my career,” he explained. “When someone asks me anything about my years on the bike, I always ask the help of my friend Emilio Bottecchia, cousin of the famous Ottavio [who won the Tour in 1924 and 1925]. He remembers everything. I just remember all my crashes!”

Still, we think he was being too modest as Favero recalled some of his exploits from that year, including a tussle for a win on stage 15 with Belgian rider Rik Van Looy.

“I remember the Trento–Bolzano stage. I attacked on the last climb and I remained with Van Looy. We had a certain gap and we were talking: I win the stage; he wins the maglia rosa jersey. We relaxed and the bunch came up on us. Miguel Poblet exploited the cars’ slipstream and won that stage. I was second and third was Van Looy.” 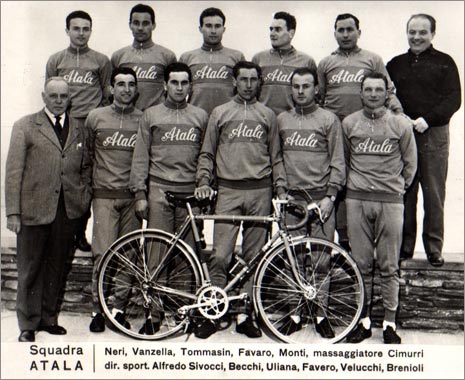 An Italian Affair
Lance Armstrong might be readying himself for his first Giro d’Italia but fifty years ago it was another Tour de France champion, Jacques Anquetil, who was planning his first Italian adventure.

At that time, though, Anquetil had won the Tour just once, in commanding style in 1957 (his four other wins were still to come). But in 1958 he had dropped out of the race so 1959 was to be his comeback year of sorts and thoughts of emulating the great Fausto Coppi for a Giro/Tour double were apparently on his mind.

The Giro was definitely an Italian tour in those days, compared to the more cosmopolitan event it has become today. Out of the 41 Giros before 1959, only three non-Italian riders had won the event: Hugo Koblet (1950), Carlo Clerici (1954), and Charly Gaul (1956). If he could win, Anquetil would be the first Frenchman to do so.

By the first few stages, the race shaping up to be a major battle between Gaul and Anquetil. The Frenchman was the master against the clock and no one was surprised when he won the time trial on stage 2 taking the maglia rosa in the process. But Gaul took it back the next day and added more time with his win on the climb up Mount Vesuvius – that features in this year’s edition. 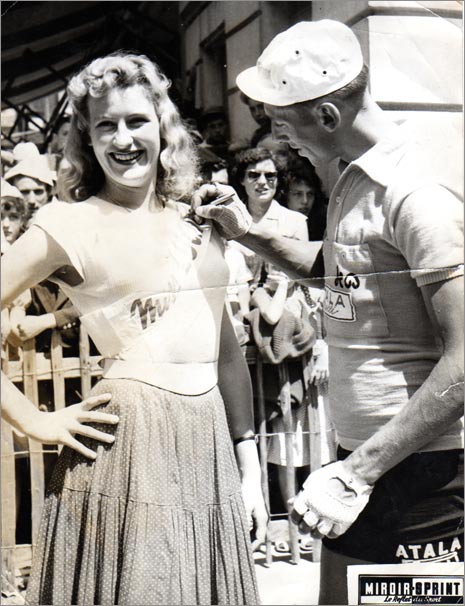 The spoils of victory… this never gets old.

Favero rode for the Atala-Pirelli team in 1959 and was wary of his chances in the Giro as he was not sure that he was a complete rider, able to win the race, despite his Tour performance the year before.

“There were two sprinters, Alessandro Fantini and Arrigo Padovan,” he explained. “My duty was to help them. I was a good climber and a good sprinter too. But I had problems with time trials.”

His support must’ve paid off, because the two sprinters won a stage each, back to back. And despite his near miss in Bolzano, Favero made it three in a row for the team in Turin on stage 18.

“There were four of us and I won the sprint,” he said. “But I would’ve preferred to win in Bolzano, in front of my tifosi.”

By this point in the race, Anquetil was back in the leader’s jersey and expected to cement his lead in the time trial on stage 19. He indeed took the victory, catching Gaul who was in front of him as his two-minute man. But Gaul held on to lose only 2 minutes and 4 seconds.

In the final mountains stage in the Alps, from Aosta to Courmayeur, Gaul produced one of his stunning escapades, waiting to attack on the last climb, the Colle del Piccolo San Bernardo on the French-Italian border. Anquetil cracked close to the summit, as did Nencini, and by the end of the stage Gaul had put 6 minutes in Anquetil and more over the rest of the field.

The Luxembourg climber had ridden another race for the ages, pushing Anquetil into second in his first Giro. In third was Diego Ronchini, from Italy’s Bianchi team. 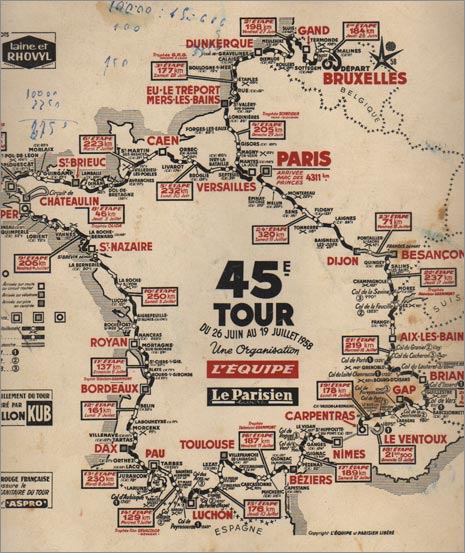 The 1958 Tour
Favero had tangled with Charly Gaul in the 1958 Tour de France, a memorable race for the epic stage win by Gaul through the Alps that broke his challengers. Favero, though, was initially in the service of the Italian team leader, Gastone Nencini, even though they were on different trade teams back in Italy.

“During the first days there was always a big battle,” he explained to PEZ. “ But I wasn’t free to move as I had to stay near Nencini. There was no freedom to move. The team orders really were orders.”

But Favero was second on stage 14 in the Pyrenees to Luchon, won by Federico Bahamontes, and took over the lead in his first yellow jersey.

“But Gaul was between me and Paris,” Favero said. “And I lost that Tour during the stage from Briancon to Aix-les-Bains.”

Despite his protestations over his memory, he could recall for PEZ much of the action during the deciding stage. 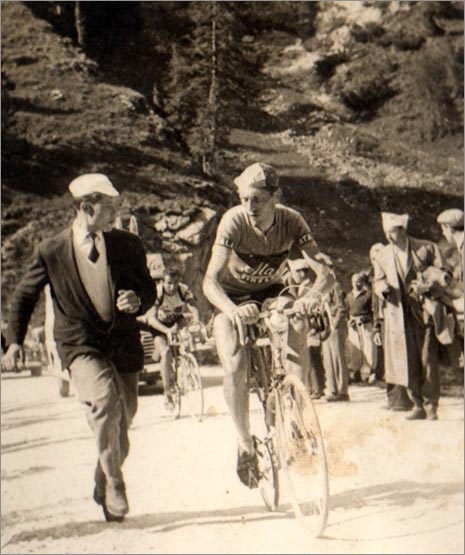 “Gaul attacked on the first climb and gained a big gap,” Favero recounted. “Before the Col de Porte, Nencini gave me the freedom and I started a pursuit. I took Ferlenghi, my teammate.

We were chasing together strongly. Adriaenssens came from behind and he overcame us. I would follow Adriaenssens but Ferlenghi commanded me to stay with him, but he went into crisis near the top and I remained alone. I arrived ten minutes later than Gaul.

“Some years ago Gaul asked about me and I’m still proud for his interest after so much time.”

PEZ also wanted to know if Favero had any particular memories of Anquetil, regarded by many as a somewhat prickly character.

“I have a particular memory of Anquetil,” Favero recalled. “It was the Tour 1961, going into Bordeaux [stage 18]. Jacques was wearing the yellow jersey and there was a break. A Belgian was going to be in ‘virtual’ yellow and nobody was chasing them [it was Eddy Pauwels, who was in tenth overall after winning the prior day’s stage]. At 60 km to the finish Anquetil started the pursuit alone, in front of the main bunch. He was alone, and nobody gave him a breather till the end.

“That evening,I the hotel elevator, we met – me, Anquetil and [Italian rider Guido] Carlesi. I said: ‘Anquetil, you were really strong.’ Anquetil didn’t answer and looked at Carlesi. ‘Carlesi tu es une merde’ – he cried – (‘you are a shit!’) ‘You didn’t help me at all!’

‘Sorry, but I had my problems trying to stay on your wheel’, was Carlesi’s reply.

“Anquetil was really a great champion! He was generous and was always working, in any break away.”

Anquetil, of course, won the 1961 Tour with 12 minutes over Carlesi and wore the yellow jersey for every single stage except the opener. It was the first of Anquetil’s four Tour victories in a row. In 1960, he had gotten his Giro victory putting poor Nencini into second by just 28 seconds but besting Gaul by nearly 4 minutes. 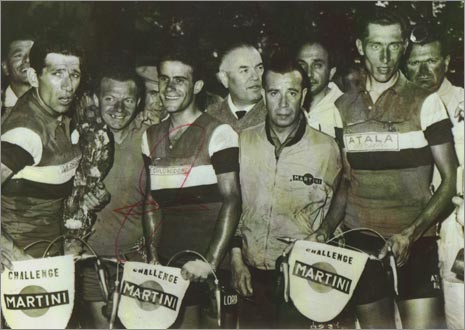 Cycling Today
Vito Favero retired in 1962. “I finished my career at thirty, which was usual for that period,” he said “At that time cycling was very hard, especially for those who weren’t a champion. Sometimes it was just a few riders that had to work hard in the big races and I was one of them. I had some crashes, sometimes against a wall, but really nothing serious. But I had many problems with my stomach and this limited me, especially during the grand tours.”

He had many more stories for PEZ, including his pride at working for Baldini at the World’s in 1958 and riding with Fausto Coppi in Algeria in 1959, just before Coppi’s fateful trip to Burkina Faso where he contracted the malaria that was to prove fatal. But we were also keen to talk about his impressions of modern cycling as he still follows some local races, as well as the Giro and the Tour of which he remains fond.

“Cycling is really different today,” he said. “Sometimes it is difficult to compare to that cycling. And I can’t understand the radios; I would abolish them.”

When pressed, it was not Armstrong, or perhaps Levi Leipheimer or Carlos Sastre, that Favero noted as his picks for this year’s Giro. Although modest about his own impressive record on the bike, he was not too shy about whom he favoured. 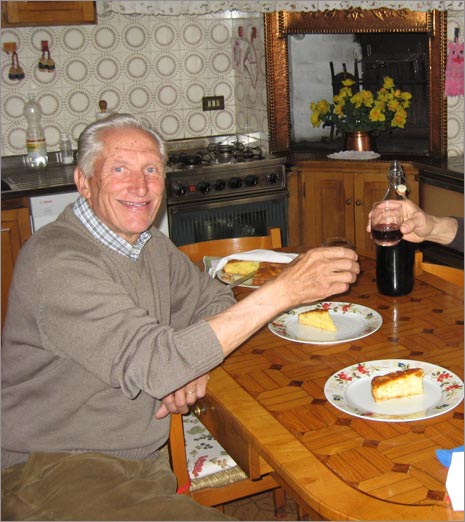 This man enjoys his life…

“It is difficult to guess the winner of the Giro this year,” he said. “An Italian anyway: Basso, Cunego, or Simoni. Why not?”

Many thanks from PEZ to Mr. Favero for his time, hospitality and insights into cycling fifty years ago. Could it be, just like in 1959, that another Luxembourg rider takes the win, or will an Italian triumph in the centenary edition?