When recently asked whether he was a racing cyclist in the style of Irish classics hardman Sean Kelly, up-and-comer Edvald Boasson Hagen professed to having never heard of Kelly, a major star of the 1980s. Although history is usually cherished by cycling fans–the oft-cited story of Eugиne Christophe and the blacksmith’s forge at the 1913 Tour de France comes to mind– at some point things become so distant as to be seen as quaint and irrelevant to the modern world and our interests. Or terrifying, judging from how high you can fall on your face from a high-wheeler.

Much credit is due to historian Andrew Ritchie for his fascinating book, “Quest for Speed: A History of Early Bicycle Racing 1868-1903″ which not only describes what was to become the foundation of our organized sport but provides insights into the attitudes and aspirations of what we would like to consider a more innocent time. The travails of the book’s cyclists, as ardently dedicated to the sport as any today, are remarkable and come alive in this thoroughly-researched but highly readable and extensively illustrated work. 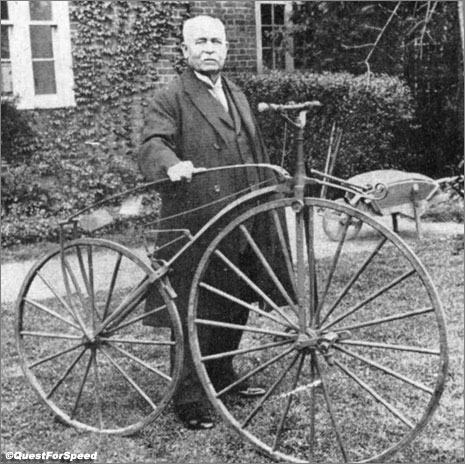 There are three periods covered in “Quest for Speed,” beginning with the era of the bone-shaking velocipede to the elegant and dangerous high-wheeler or ordinary and then on to the safety bicycle, with its final technological leap to pneumatic tires. To a large extent the technological progress of the bicycle was due to a combination of racing and commercial interest as for the first time an individual sport requiring significant outlay for equipment had come into being. It was the beginning of an era of leisure when sports became organized and public interest in football, cricket, boxing, walking and other athletic endeavours grew rapidly. 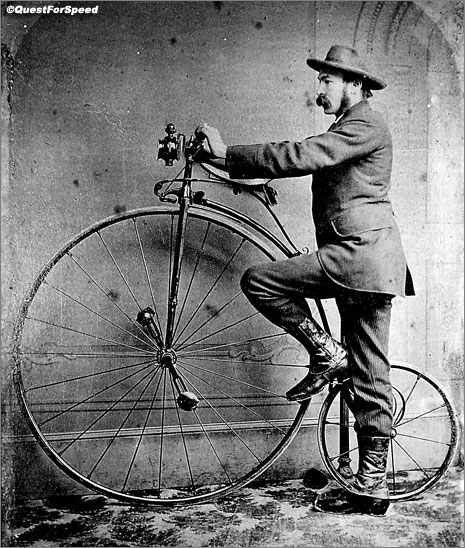 Although much pioneering effort took place in France, including the first notable bicycle race in 1869 from Paris to Rouen (won by an Englishman), as the velocipede craze expanded it quickly made its way to the United States and then to Britain, which are the focus of the majority of “Quest for Speed.” For many, the thrill of modernity in the 1870s was to be found in an indoor cycling arena or, soon enough, outdoors on a track. 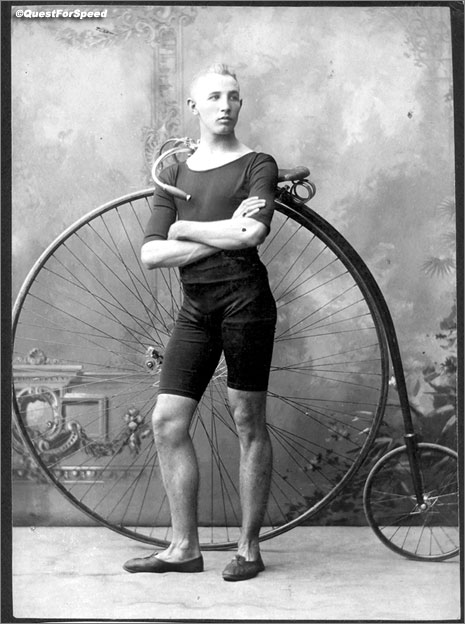 The high wheel bike was not for sissies.

According to the author, within a year of the introduction to England, 2,000 admission-paying spectators were commonly counted at tracks and a circuit of star riders had already been developed. Manufacturers in Wolverhampton, Manchester and Birmingham and other bicycle-making cities became involved. The advent of quasi-professional racers meant that manufacturers had critical and demanding consumers, a source of valuable feedback in the technological advancement of the product.

Of course, with organized events come rules. Those critical of the UCI’s regulations today might be impressed by the attempts to regulate bicycle racing at its origins. One of the great struggles was in the categorization of racers as “amateur” or “professional,” a problem that was to bedevil the sport for several decades and had serious implications on the growth of pro cycling in Britain and the United States. In these early years in Britain there was an attempt to maintain class structure. In 1871 “amateurs” were gentlemen who took no money for their wins; “professionals” were, originally, not people who lived solely from race wins and sponsorship but people with occupations, such as mechanics or labourers, who were deemed by their livelihood as having a physical advantage over the softer university types. They were required to race in separate events, saving the risk of anyone being defeated by a social inferior. 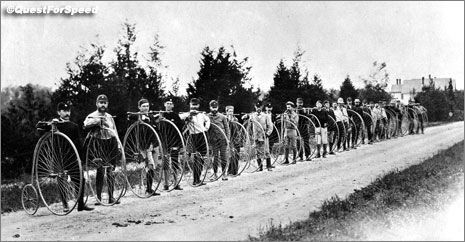 Wheel around the hub.

The fun and games were accompanied by signficant advances in technology. From the crude and startlingly heavy velocipede, often one step up from blacksmith work, the lightweight, hollow-tubed highwheeler was born, which dominated the sport from about 1874 to the later 1880s. It was considered to be on the absolute cutting edge of sport. “In addition, it was dangerous on road and track for serious racing cyclists and for those who rode merely for exercise and pleasure.”

There are fascinating portraits of the stars of early bike racing from Britain and the United States. My favourite is the account of the Hon. Ion Grant Neville Keith-Falconer, an aristocratic Cambridge University student who raced high-wheeled bicycles for eight years from 1874 to 1882, breaking numerous records (including the famous Land’s End to John o’Groats ride). 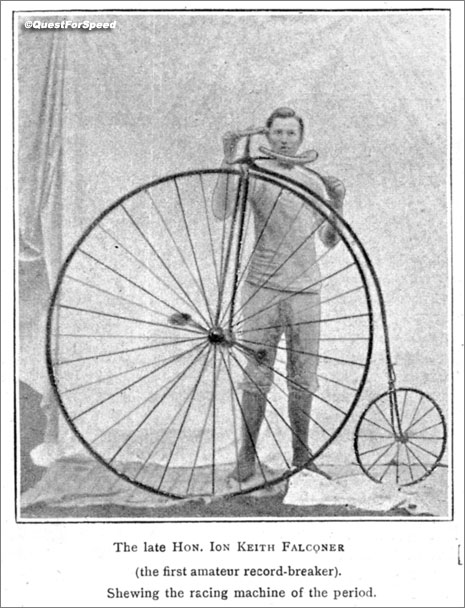 Although an amateur, with special permission from the governing Bicycle Union he was allowed to compete against a professional racer, John Keen, in several matches. One writer described Keith-Falconer as the ideal gentleman amateur who “carries his honours with charming modesty” and who participates in an “amusement” rather than a sport. An Arabic scholar, linguist and fervent Christian, Keith-Falconer quit cycling suddenly and became a missionary in Africa, dying in Aden at age thirty of a tropical fever. It all sounds rather 19th Century-ish 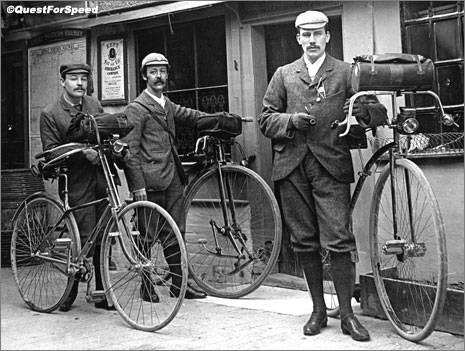 The growth of the sport in the high-wheeler era was impressive and by 1874 nearly 100 races were recorded in Britain as cycling moved “from a kind of show-business entertainment into a formally constituted and recognized sport and pastime.” It had “a well-defined club structure, championships, record-keeping and record-breaking. It was recognized as a specialized athletic activity, with specific training need and priorities The sport was supported by an important manufacturing industry and had its own specialized weekly and monthly press.” It sent out lobbyists and was the focus of interest in the mainstream press. In 1878 the Bicyclists’ Touring Club was founded for those cyclists who were less interested in using their machines for racing and which, by 1889, claimed to be the largest athletic organization in the world. 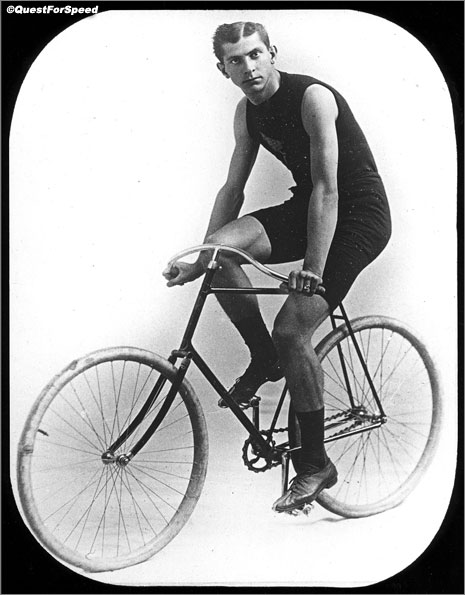 The United States was becoming the other major cycling nation, with activity predominantly focused in the Northeast and the book describes in detail the effect of visiting European professional and the growth of cycling “meets.” Cycling was highly social in nature. Clubs had distinctive uniforms and cyclist often wore medals as they executed complex patterns, sometimes to bugle signals. 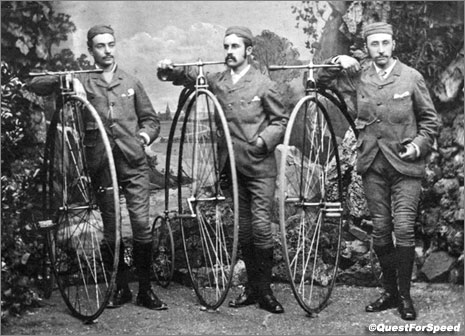 The author may focus on Britain and the United States, but he also covers the growth of cycling in Continental Europe. Although many of the organizational structures were carried over from Britain, France began to move in a different direction in respect to its treatment of riders, allowing amateurs and professionals to race together. Racing on roads was considered an excellent public spectacle at the same time that British organizations were trying to keep races off of roads for fear of public and official opposition. The emphasis on track racing and hilariously discreet time trialling meant that British road racing never had a chance to develop in the continental style and as the great classics races began to appear in Europe, Britain, the birthplace of some much cycling technology, had no equivalent. 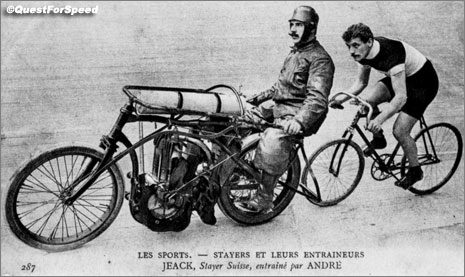 As indicated by its title, “Quest for Speed” is about racing but with the advent of the fastest version of the bicycle, the safety bicycle with its chain drive and equal-sized wheel, in 1885 (followed soon after in 1887 by the invention of the pneumatic tire), the bicycle became useful to someone besides athletic young men with some disposable income, allowing participation in cycling by older people as well as women. Bicycles could now serve a utilitarian function and perhaps, as new diversions such as motor cars arrived on the scene, by 1900 were no longer seen as the cutting-edge of modernity. 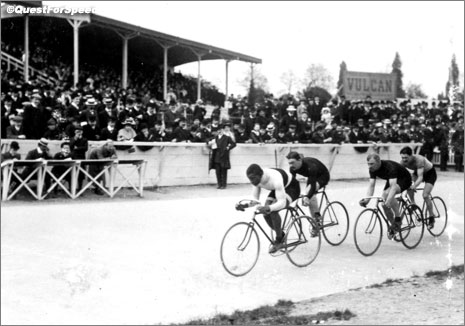 Andrew Ritchey is a noted cycling historian and author of, among other things, a biography of Major Taylor. He is a regular contributor to the proceedings of the annual International Cycling History Conference (ICHC). “Quest for Speed” is a labour of love in the best sense of the word. Due to its impressive quantity of period illustrations, two academic presses resisted publishing it, with the result that Dr. Ritchie has self-published it which, with all the research and writing involved, must surely be a difficult and lengthy undertaking. There is a great deal to be learned in these pages. For example, the evolutionary route to the safety bicycle was not directly from the high-wheeler but via the tricycle. This book deserves a broad audience, perhaps even Edvald Boasson Hagen.

Novelist L.P. Hartley famously wrote: “The past is a foreign country; they do things differently there.” The story told in “Quest for Speed” of developing technology, rule-making, class conflict, international competition and sports stars, reveals a world that is perhaps not as far from ours as 150 years would indicate and that many of the issues it addresses became the foundation of our cycling present.

or in the UK from the Veteran-Cycle Club Sales Officer, Bibi Bugg: e-mail: [email protected]

***
When not wondering why his pneumatic tires still do not allow him to travel faster than an 1871 velocipede rider, Leslie Reissner may be found pursuing varied cycling amusements with charming modesty at www.tindonkey.com