Peter Stetina was having quite a good 2015 season until he hit a post set into the road in the finalé of stage one of the Vuelta Ciclista al Pais Vasco. He sustained terrible injuries, saying at the time: ‘I am lucky to be alive’. The man from Boulder was back racing in Utah by August and has signed a new contract with Trek for 2016 to team up again with Ryder Hesjedal. Ed Hood caught up with Stetina to hear all about it.

Back in April, BMC Racing Team’s 28 year-old US professional Peter Stetina was riding in to the finish of Stage One of the Tour of the Basque country in the peloton – it should have been, ‘just another day at the office.’ But with no other warning or protection than a plastic cone plonked atop it, situated in the path of the speeding bunch was a steel post designed to stop motorists parking in front of garbage skips.

Stetina hit it at an estimated 60 kph breaking his tibia, shattering his knee cap and breaking three ribs when he hit the ground. Remarkably he was back racing at the Tour of Utah by the end of the summer – PEZ caught up with him recently to hear how he’s progressing and to talk about his move to Trek Factory Racing for 2016:

PEZ: How are the injuries, Peter?
Peter Stetina: They’re still injuries and will be for the rest of my life! I can’t fully squat, and running is proving to be really tough. Cycling is better though. The good thing is I don’t have any knee pain.

PEZ: You were going well early season this year – 5e at La Drome – must have made the crash pill more bitter?
Of course I get angry at times, about how my life is different because of a one second event. I’ve learned a lot about patience through this ordeal, and accepting things as they come. You can’t force much in this life, you can focus 100% on the cards you’ve been dealt. 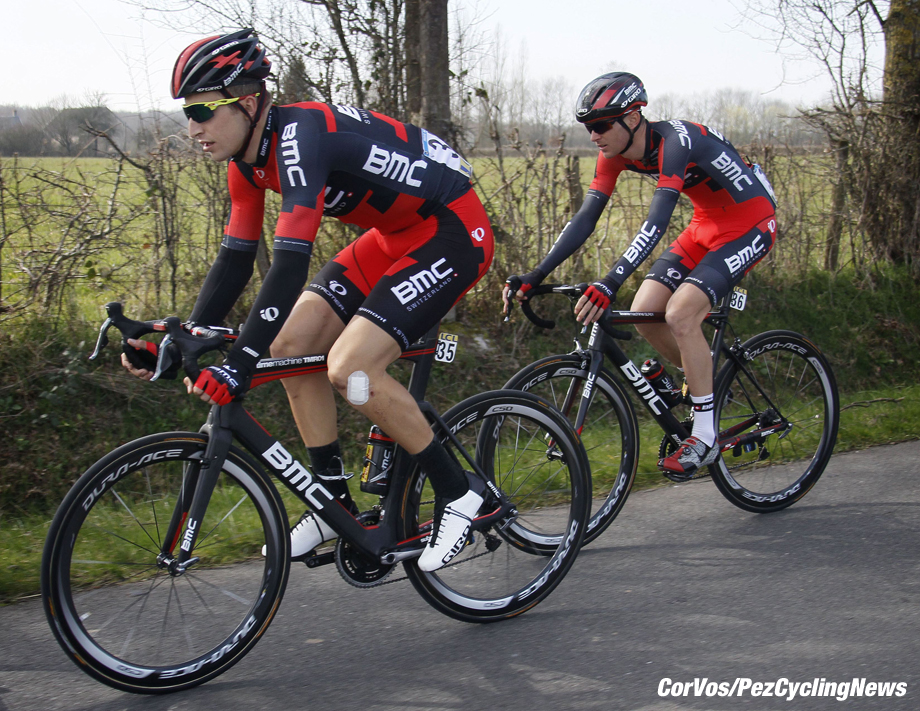 Stetina and Taylor Phinney, both on the recovery trail

PEZ: How thoroughly have Trek checked you out?
Trek Factory Racing was interested before my accident. My agent kept them up to date every time there was progress. I’ve made sure they know where I’m coming from, my long term prognosis, what I want with my return to racing. And they are clear on what they want from me as well. It will be a great fit.

PEZ: Tell us about your rehab program.
After I made it back to The States in April, I did Physical Therapy two hours each day, five days each week plus ‘homework’ for four months until the start of Utah. At first it was just breaking down scar tissue, gaining a degree of flexion a day. That’s horrible, the pain is worse than any climb. Eventually I had just enough to get over a pedal revolution. Then I rode and that snowballed the progression. After racing Colorado I went back in for one last surgery (four in total) to remove all the metal from my tibia. Now I’m metal free, which snowballed even more gains. Currently, I do physical training twice each week and specific weight training four times each week on top of normal bike training, which is all right versus left leg specific. I’m really glad to have a steady winter in front of me so I can correct this imbalance and hopefully be 100% for 2016.

PEZ: You came back very quickly – about right or maybe too quickly?
The doctors all said this was the fastest patella recovery they’ve ever seen! I had a lot of time to reflect and knew I still wanted to race. BMC always had my interests at heart, they put no pressure on me, but I wanted it. I was on a contract renewal year, and the best way to convince teams that I could race again was to race. I had only been riding a few weeks before the start, but the bone was solid and riding wasn’t too painful, so the doctors gave me medical clearance. Also, Utah is at altitude so I could rely on lungs instead of legs, and all the cards fell into place. 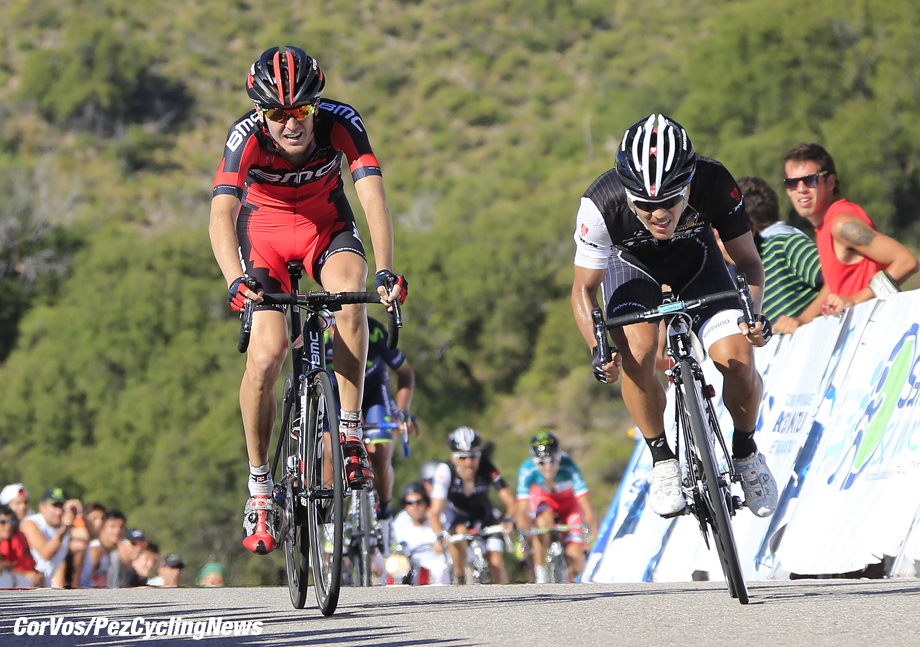 PEZ: How did it feel on the start line at Utah?
Butterflies! It was pissing rain for five hours that day, and I loved every minute of it. To be back in the speed of the Peloton was exhilarating, it’s like an addiction. I got my fix!

PEZ: You finished Utah but DNF in Colorado – a wee bit too much?
Exactly. Finishing Utah was more than anyone expected, but Colorado was a big goal for the team. BMC gave me freedom to focus on myself, but I wanted to help Rohan and Brent. I felt guilty just sitting in the group when the BMC boys patrolled the front. I decided to help. So I went immediately into the highest power I’d done yet, and got Achilles Tendinitis. I made it until halfway in the penultimate day: the break was established, and it seemed we had the race locked up, so I stopped being stubborn and bowed out. Not that I was walking well before, but it was REALLY tough the following week.

PEZ: But you raced the Japan Cup – not wanting to let the season end?
I’ve had the longest break of my life, I needed another fix. It was good for my body to remember what race rhythm felt like, so I could have that for my winter prep. Plus, I’ve never been to Japan. Michi Schar and I went sightseeing afterwards and ended up walking 17k around Tokyo. That was the best rehab I’ve had yet! 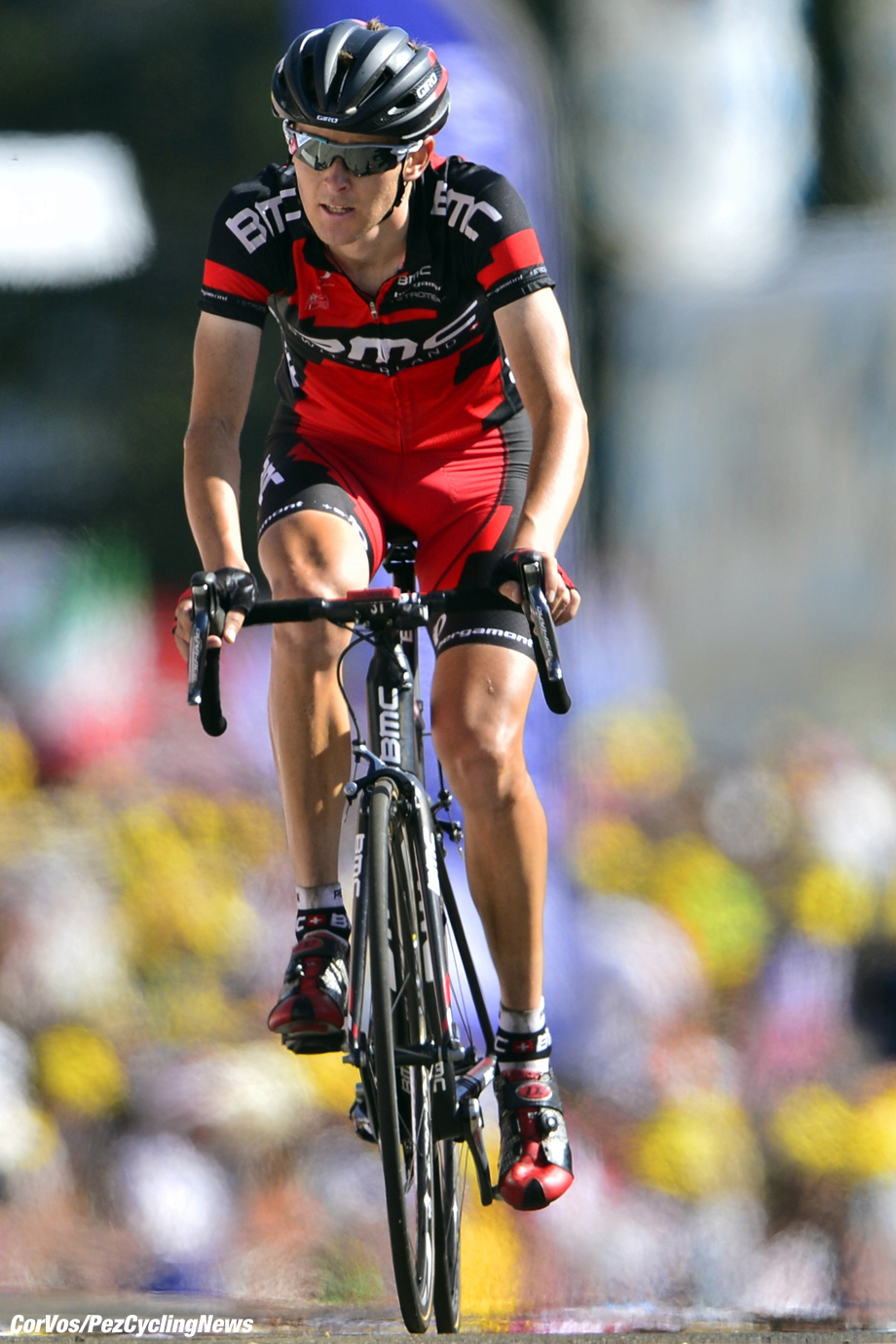 PEZ: What’s the latest legal situation regarding your crash?
It’s a slow process. What happened is inexcusable in my opinion. The race organization never made any attempt to contact me. I was disappointed to hear they’ve been silent to Sergio Pardilla as well.

PEZ: On the subject of bad crashes – how’s your dad after his one back in 2013?
My Dad has had an amazing recovery as well, must be the Stetina genome! He is now riding a solo bike really proficiently. His recovery is ongoing, and may be a lifelong process. Some of his mental aspects are different from before, but that’s normal for a traumatic brain injury.

PEZ: Reunited with Ryder at Trek?
Yeah, we’ll have fun! Honestly I didn’t know Ryder was joining when I signed for Trek Factory Racing. It’s great because we know each other’s style of racing. When we do line up together, we know how to Shake n’ Bake. 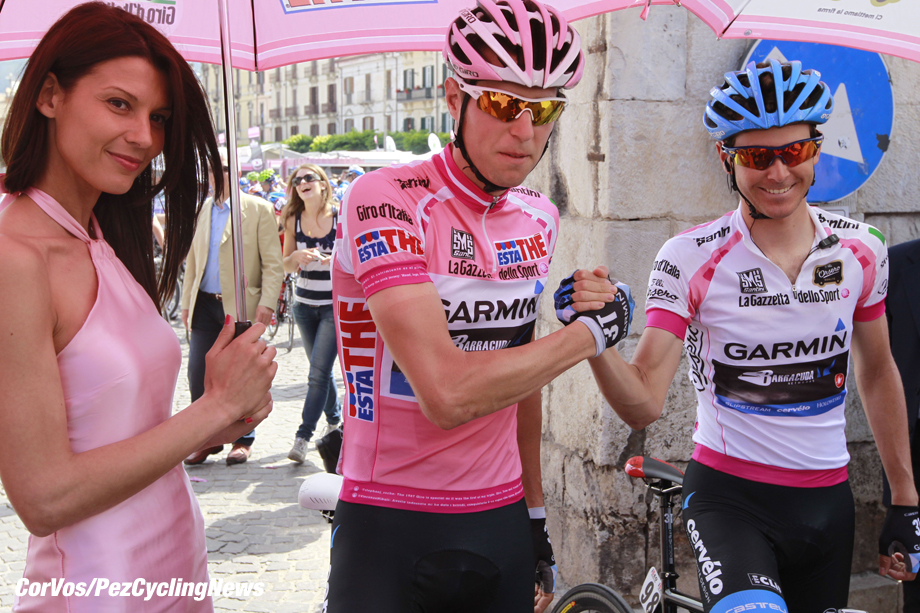 PEZ: Do you know when your debut will be with the team?
December training camp is when we get our official schedule, but I’m keen to line up at Tour Down Under. I’ve missed a lot of racing, and I need an early start to get back to 100% before the big objectives.

PEZ: Will California be on the agenda after your fine ride in 2014?
That’s the plan. Again, it will be finalized in December. The route announcement gave me a jolt of winter motivation. With finishes in Santa Rosa (my hometown) and Tahoe (where I train and have a cabin), I’m ecstatic. Plus the Gibraltar mountaintop finish makes it a nice route for me. 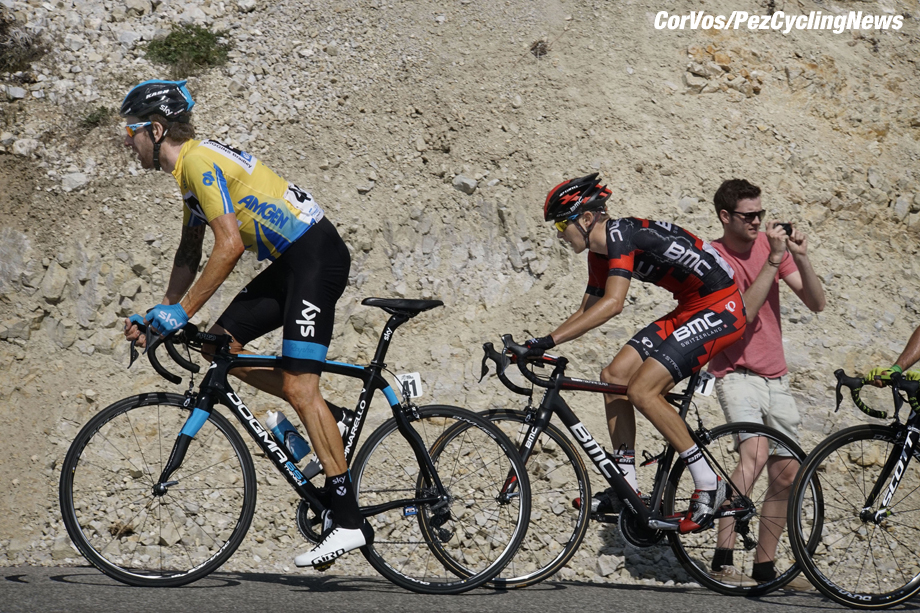 On Bradley Wiggins’ wheel in California ’14

PEZ: Which one day and stage races are your faves and why?
One day: The Firecracker 50 marathon MTB race in Breckenridge, CO. It kicks off the 4th of July Parade downtown, has such good neutral support that you can start with no food in the pockets, and finishes with a BBQ! Stage Race: During the event, I enjoy California and Colorado; backyard racing with great hotels. I love the Tour de France as well, but only after Paris; during it there’s so much stress!

PEZ: Will there be any changes to your coaching arrangements with going to Trek?
Trek Factory Racing has its own in-house trainers. I’ll keep in touch with Max Testa and Eric Heiden at BMC a bit because they know the intricacies of my injury so well. 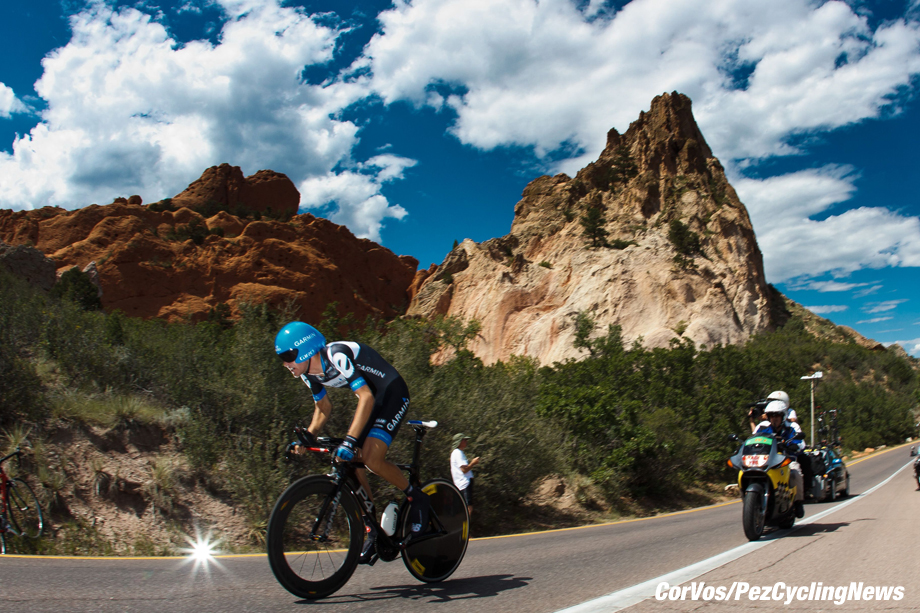 PEZ: I’ve read you’re keen to work on your TT with Trek, what will that involve?
It’s already started and things are really promising! Up next is velodrome testing during the December training camp.

PEZ: Will Girona still be ‘home’ for 2016?
Home is California. My wife has a full time job here, so she doesn’t come to Europe often. I still have my apartment in Girona in-between races. But anytime I have a decent break, I go home and train in Santa Rosa, or Lake Tahoe for altitude. The riding there is some of the best in the world, those are my power places with good vibes and good mojo. Happy rider = fast rider.

PEZ: What’s 2016 about?
Four things:
Comeback to 100%: The most important.
Tour of California: A personal goal.
Tour de France: Uncork something big with Bauke Mollema.
Olympics: A climbers course!

Represent my country with some of my closest buddies with whom I know how to race, and be aggressive in the hills like I’ve been in the past. 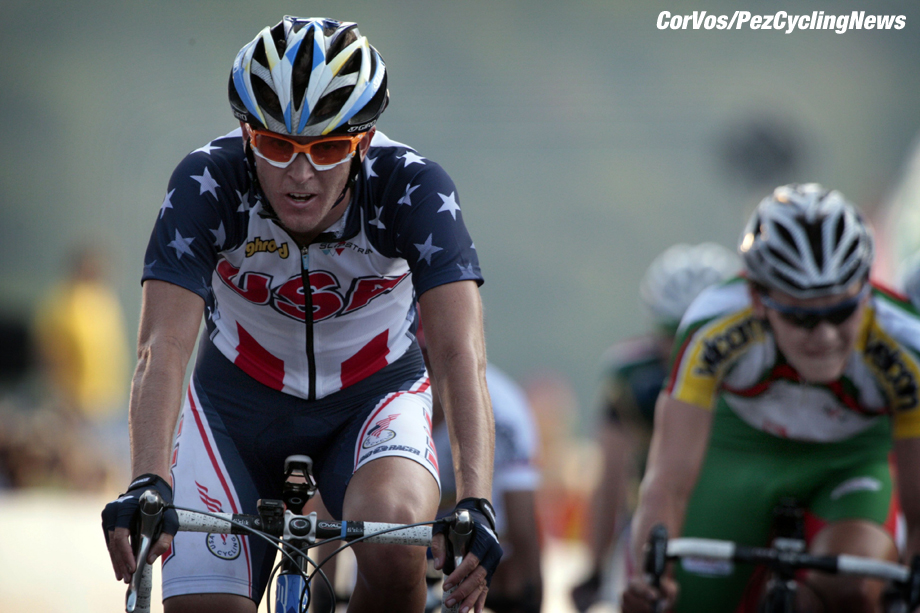