“Riders from around the globe are coming to the VELO Sports Center in LA this March to compete in the launch of the World Cycling League – an event that’s going to change the face of American track cycling,” offered Pennsylvania Lightning rider Michael Chauner. “The WCL is using cutting edge technology for every aspect of its racing from timing to statistics, including some of the fastest skinsuits on the market from Champion System.” 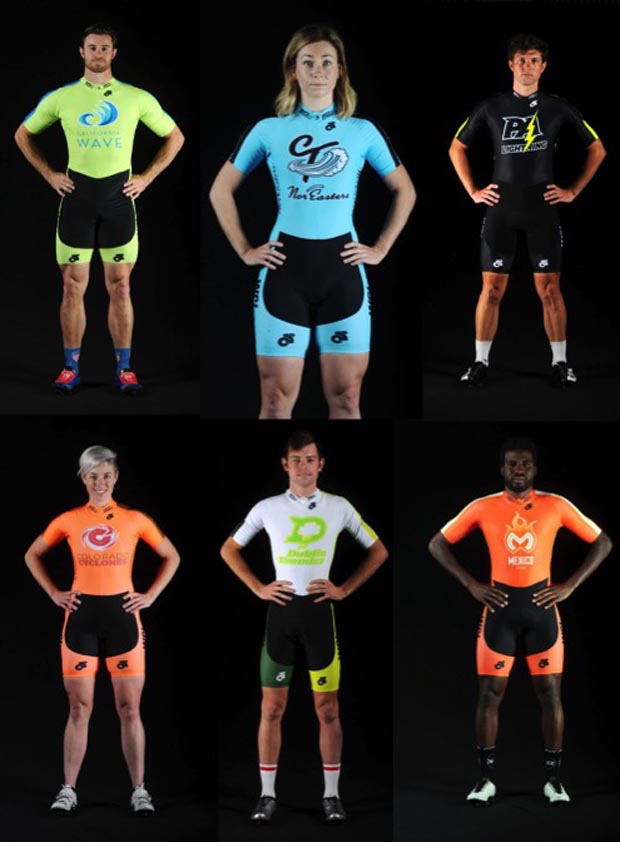 The World Cycling League is a first-of-its-kind track racing series that borrows many features of European six-day racing, with music and non-stop entertainment. It mixes larger teams with both men and women (in this case with four men and three women per team.) The main event is slated for March 18th and 19th at the VELO Sports Center in Carson, California.

“Champion System is the perfect partner for the newly-formed World Cycling League,” said Dave Chauner, CEO of the WCL. “From the beginning, they’ve understood our vision. Their products are well known to world-class track cyclists and they’ve been a quality brand name within the sport for a long time. If you look at the designs of our teams and the clothing they’re wearing, it’s symbolic of the level we’re aspiring to achieve with this new venture.”

“Our involvement with the World Cycling League is just another example of our commitment to support all cycling disciplines at all levels from regional teams up to the New Zealand national track team,” adds Champion System’s Co-Founder Scott Kaylin. “We’re honored to work with such great athletes and to provide them with the Carbon Rear Zipper Speedsuit that New Zealand is taking to the Olympic Games later this summer. We’re sure the WCL athletes will find that our skinsuits elevate their performances.”

The World Cycling League will be fielding six wholly owned franchise teams. The inaugural teams are the home-state California Wave, Colorado Cyclones, Pennsylvania Lightning and Connecticut Nor’Easters. Two international teams also will be part of the field, Dublin Thunder and Mexico Heat. Each team will be made up of a mixture of domestic and international elite-level riders.

ABOUT CHAMPION SYSTEM
Founded in 2005, the innovative and quality-driven approach of Champion System has revolutionized both sublimation printing and garment construction. With offices in 22 countries the company offers leading edge lifestyle and technical wear for passionate athletes across the globe along with an intuitive ordering process that places limitless customization just clicks away. Champion System’s streamlined design, manufacturing and delivery earns nods from Olympians and World Champions hailing from a wide range of sporting pursuits including rugby, cycling, running, triathlon, motorsport, Nordic and many more. To find out more, please visit Champ-Sys.com or follow us on Twitter, Facebook, Instagram or YouTube.

ABOUT THE WORLD CYCLING LEAGUE
The World Cycling League is the first independently owned and funded indoor track cycling league. Financed by individual investors, the WCL has partnered with Anschutz Entertainment Group (AEG) to introduce WCL’s first event, the TeamTrak Premiere at AEG’s VELO Sports Center. The WCL is sanctioned as an invitational event to qualified track cyclists by the USA Cycling, the official governing body of cycling in the United States. KOM Sports Marketing of Colorado Springs, an industry leader for more than 20 years, is the marketing agency and has developed the logos and brand elements as well as promotions for the event.