Road ID, the manufacturer of the premiere line of identification gear for cyclists and outdoor enthusiasts, is stoking the first-ever Tour de France Madness by funding a one million dollar prize for anyone filling out a “perfect bracket” for the upcoming Tour.

Visitors to RoadID.com/Win can fill out a bracket listing their picks for the Top Ten overall finishers, in exact order, for the General Classification of the 2014 Tour. Anyone who fills out a perfect bracket and correctly guesses the Top Ten in exact order is eligible to win an unprecedented one million dollar prize.

Road ID Ambassador and Tour television color commentator Bob Roll said, “It’s great to see a company like Road ID bringing some positive energy and fun into the sport of cycling. Picking the top ten GC finishers in order won’t be easy, but it’s definitely doable. If someone pulls this off, my job might be in jeopardy.”

“The Tour de France is our Super Bowl, our March Madness — the one time each year when all eyes are on the cycling world,” commented P.J. Rabice, marketing director for Road ID. “And I am always looking for unique and creative ways to engage with cycling fans and introduce them to our line of ID products. So when the idea of running a $1 Million promotion came up, it was simply too enticing to pass up.”

About Road ID
Road ID was born in the fall of 1999, when Edward Wimmer was training for a marathon and had a close encounter with a motorist. His father, Co-Founder Mike Wimmer, had voiced concern regarding the fact that he did not carry ID during training. The near miss was the catalyst for the creation of wearable ID that communicates contact and medical information in an emergency. Road ID now offers a variety of models including the Wrist ID Sport, the Wrist ID Elite, the Wrist ID Slim, the Ankle ID, the Shoe ID, and the FIXX ID (necklace). Road ID is a staple among athletes (professional and amateur) and increasingly popular in the general public. www.RoadID.com. 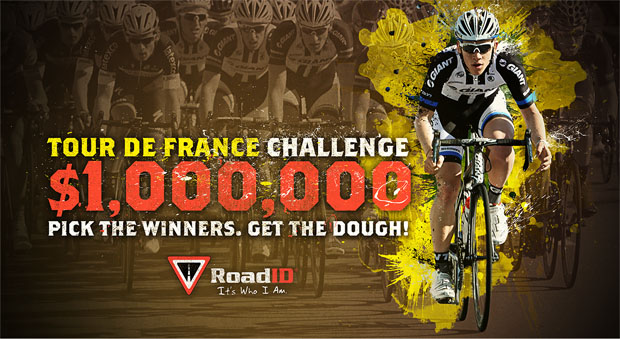