Nothing fits with cycling so much as the post-ride java stop, and that’s probably half the reason many of us get out on group rides to begin with. Caffeine is probably the most common ergogenic aid in use in cycling and the world in general, so it’s time to take a look at the science behind it…

If there is one thing that fits hand-in-hand with cycling culture, it’s coffee and caffeine. Before Gatorade ever came along, diluted and de-fizzed cola was (and often remains) the sports drink of choice, especially near the end of an endurance event. I know my cappuccino machine saved my sanity during the long summer way back when I was writing up my doctoral dissertation, and it remains heavily abused throughout the year.

Caffeine Pharmacology
First off the techno-speak. What is caffeine? Caffeine is a chemical in the methylxanthine group of alkaloids. It has a wide range of effects on your body, especially the nervous system and the cardiovascular system. In very general terms, it is a stimulant that prepares your brain and body for “action.” As such, some general effects include an increase in heart rate, dilation of blood vessels to ease blood flow throughout the body, and generalized excitation of the central nervous system and its sensitivity to stimulation.

As with any drug though, there are side effects, with the intensity of the side effects generally increasing with dosage. Again, the primary sites for these effects are the nervous and cardiovascular system, including tremors, impairments in motor control and coordination, anxiety, very high and irregular heart rhythms. 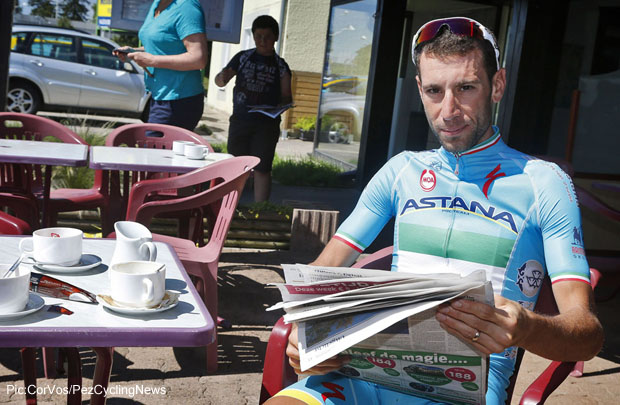 Coffee on the Tour rest day for Vincenzo Nibali

Caffeine Junkies
We all know coffee junkies, and caffeine is clearly a drug with a high level of popularity and dependency. A standard 250 mL cup of coffee contains 70-180 mg of caffeine depending on the method of preparation, while tea has much less at 20-35 mg per cup and cola about 30-40 mg. In the past couple of decades, the growing popularity of energy drinks has featured an arms race to pump greater and greater amounts of caffeine than the competition. As an example, Red Bull has about 80 mg of caffeine per 250 mL cup, twice that of Coke. But the fastest method of caffeine effect is through gum, as the caffeine enters the bloodstream through the blood vessels of the mouth and tongue, rather than the delayed effect of transit and absorption through the intestines.

The effect of any dose depends on many factors, including body mass, built-up tolerance, etc. Moderate consumption (250 mg) produced strong feelings of elation and peacefulness in subjects, while also improving their performance in several simple mental and motor performance tasks (7). In contrast, subjects ingesting a high dose (500 mg) experienced more unpleasant effects (anxiety, nausea, heart palpitations) while also impairing their task performance. Name of the game: as always, moderation is key and more is not necessarily better.

So from the above, it is clear that moderation is important. If you are serious about using caffeine as an ergogenic aid rather than an excuse to drink coffee, you need to taper off the regular use of caffeine as much as possible and save its use for prior to and during actual events. If you still want the post-ride coffee, consider going decaf. 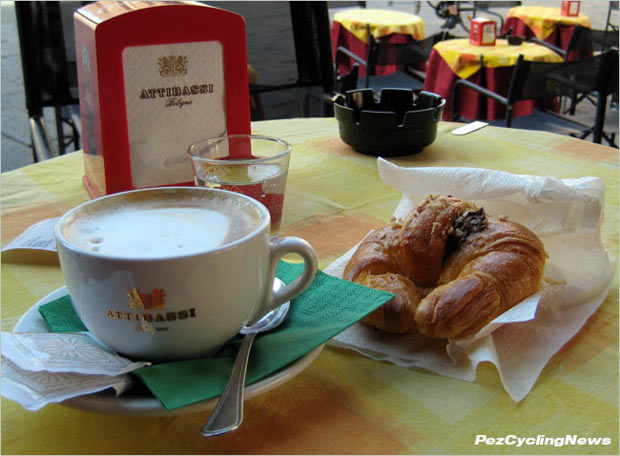 On the Road
Of course, the above science is pointless to discuss if caffeine actually did not work as an ergogenic aid. The scientific literature is pretty clear that, used correctly, caffeine does indeed help to improve performance on the bike, especially short-term, high-intensity efforts. Bell and McLellan (2) found that time to exhaustion during a high-intensity effort (80% VO2max) was greatly increased following caffeine dosing, and that the benefit was maintained when the same test was performed in the afternoon, suggesting that re-dosing was not needed for multi-event competitions.

In contrast to high-intensity exercise, the benefits of caffeine use during prolonged endurance exercise is somewhat less clear. A Scottish study had eight highly-trained cyclists perform 100 km time trial, interspersed with periodic high-intensity 1 k and 4 k efforts, and found no benefit with caffeine ingestion (5). Meanwhile, military researchers in Canada found minimal benefits from caffeine ingestion prior to a 10 km run with helmet and backpack (3). Finally, compared with carbohydrate ingestion, caffeine had no further additive benefit during 120 min cycling effort (6). 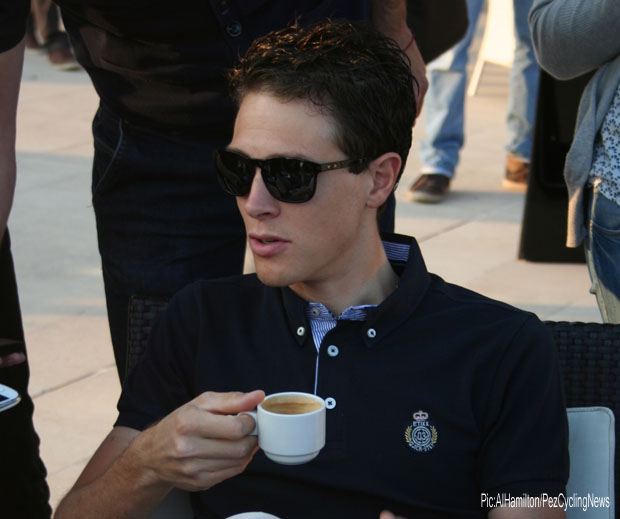 Niki Terpstra has his post-ride coffee

Train First, Coffee Later
Oh yes, one final caveat. As I’ve pointed out numerous times, no ergogenic aid is going to turn a donkey into a thoroughbred, and supplements are only the finishing touches on top of solid training. Proof? Trained swimmers ingesting caffeine had significant improvements in the swimming velocity, whereas untrained swimmers were found to have absolutely no benefit from caffeine ingestion (4). So get out riding before you break out the cappuccino maker!

Playitas Partners with the Bigla Team