Cycling, while generally pleasurable, is ultimately all about pain and suffering at the sharp end of competition. Fatigue and exhaustion is something we have all felt at some time or other. However, why do we actually get tired on the bike and what constitutes fatigue?

Why Do We Get Tired?
The body, while an incredibly efficient and magnificently tuned machine in many aspects, is ultimately not a robot or an infinite system. At some point during every ride, no matter how easy the intensity, you will end up getting tired and not able to sustain that same workload. This is true whether it’s a time trial up l’Alpe d’Huez, a sprint down the Champs Elysee, or even a Sunday afternoon coffee shop ride pace.

It may come as a surprise, but even after over a hundred years of exercise physiology research, the actual physiological reasons why humans fatigue during exercise remains a complete mystery to scientists. We certainly have a number of clues and strong theories, but no single model of fatigue seems to be able to accommodate all physiological mechanisms or real-life situations. 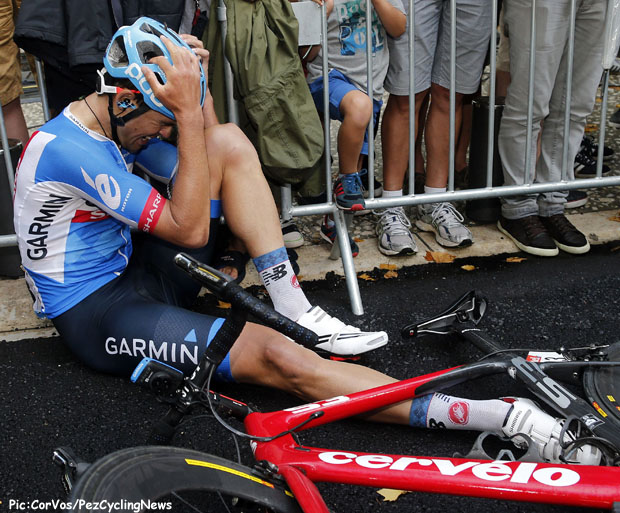 Not Just a Word Game
Why do we care about fatigue or what causes it? Cyclists are all a bunch of masochists, and nothing is really more important than understanding, and ultimately prolonging the onset of, fatigue. At its core, every race at some point comes down to how much pain and suffering you can put up with, and whether that’s more than your rivals. So if we understand the contributing causes of fatigue better, we can better determine and optimize the training adaptations needed to extend our limits and improve our performance.

Defining “Fatigue”
Much of the time, the very first problem is to get everybody speaking a common language. With so many disciplines within science and even within exercise physiology itself, the same term can be used by different scientists to mean different things. So, for example, “a biomechanist may view fatigue as a decrement in the force output of a muscle, a psychologist may see fatigue as a ‘sensation’ of tiredness, whereas a physiologist may define fatigue as the failure of a specific physiological system.” (1) Each means a different thing, and this common usage of a term can cause great confusion when trying to integrate across different disciplines.

At the same time, the implication of all of those disparate definitions is that fatigue can be viewed as the first signpost that the body cannot handle a particular workload. For example, lactate is starting to build up in your muscles and you’re starting to feel the burn in your legs. In contrast to this point of ‘fatigue’, the point of termination of exercise is better defined as the point of “exhaustion,” where you simply cannot sustain that workload anymore and have to slow down or stop.

We will go with these rough definitions of fatigue and exhaustion as they relate to our interest in cycling:

Fatigue: Sensations of tiredness and associated decrements in muscular performance and function. This can generally be thought of as a safety mechanism to prevent your damaging yourself.

Exhaustion: The point of voluntary termination of exercise at a particular workload.

The Humpty Dumpty Approach
One of the challenges of scientifically tackling something as complex as fatigue is that scientist are typically forced to take a “reductionist” approach to the problem. That is, to pry open the “black box” that is a human at exercise, we have to test individual systems to see whether they influence performance. So we test things like whether having lower glycogen (carbohydrate) stores in our body has an effect on exercise performance, and we do this by isolating and manipulating glycogen stores while trying to keep other systems as “constant” or “normal” as possible.

The end result is that we find a lot of things individually has an effect on performance, but it becomes really difficult to put everything together into a working model that explains the entire system. One analogy is to imagine yourself to have never seen a bicycle in your life, but you’re told that all of the individual parts are in this big bin and to put it all together without any instructions or even what a bicycle looks like. 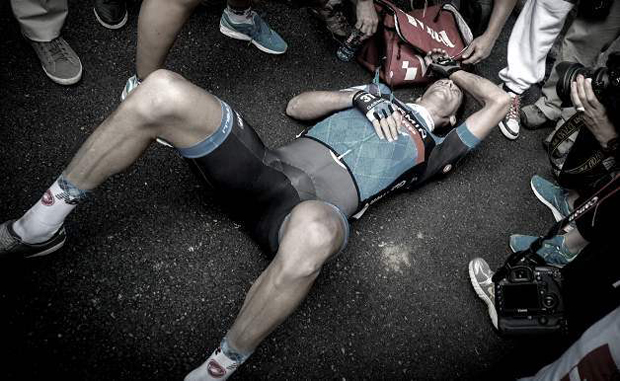 Components of the Fatigue Gruppo
Throughout this year in Toolbox, we’ll have a recurring examination of the different systems that may be directly implicated as causing “fatigue” in cyclists. By examining each of these potential mechanisms in isolation, we’ll try to get a better handle on just how important they are in affecting the onset of fatigue, and how we might extend their limits.

1. Cardiovascular. This is really the reason why blood manipulation by both legal and illegal means can be so effective for endurance cycling. The more red blood cells and hemoglobin coursing throughout your body, the more oxygen and nutrients you can deliver to your muscles. In turn, you can maintain a higher workload primarily through aerobic metabolism without going too deep into anaerobic metabolism. This focus on maximizing your cardiovascular efficiency is also one of the primary rationale behind prolonged base training prior to high-intensity training.

2. Energy Supply / Energy Depletion. In this model, fatigue is directly due to insufficient adenosine tri-phosphate (ATP – the basic energy currency unit in the body) being supplied to the working muscles. While the body is generally very good at protecting its store of ATP inside the muscles, it’s possible that low ATP levels causes sensors within the muscle to send fatigue signals to the brain. A parallel model to this is the depletion of glycogen (storage form of carbohydrate) in the muscles and liver to fuel the active muscles.

3. Neuromuscular Fatigue. The first two models are primarily on the supply side of the chain. With neuromuscular fatigue, we’re talking about the output component. Namely, even if oxygen and fuel delivery remains adequate, prolonged exercise and repeated stimulation may cause the muscles themselves to be incapable of contracting as fast or as strong as necessary to maintain the desired workload.

4. Muscle Trauma. Above and beyond the muscles becoming “tired” or incapable of the same strength of contraction, the high force output in cycling may cause local damage to muscle cells. In addition to the actual mechanical damage, local inflammation and chemical imbalances may further limit force output and also send fatigue signals to the brain in order to minimize the risk of further damage.

5. Biomechanical Model of Fatigue. We’ve spent a lot of time in Toolbox over the years on efficiency, pedaling dynamics, and optimal cadence, and it all comes down to good pedaling. In some ways, this is both an individual mechanism and also an integrated model. This biomechanical model proposes that non-optimal pedaling will cause an increase in energy required to generate a particular power output, which then creates the domino effect of increased cardiovascular and energy demand, along with increased stress on the muscles.

6. Thermoregulatory Model. This is one of the core research areas that I specialize in. Over the two decades or so, a lot of research has found that individuals seem to become exhausted and voluntarily terminate exercise at a very consistent core temperature no matter what else we do to them (hydration, heat acclimation, starting core temperature, etc.). So a proposal has arisen that elevated temperature directly affects the brain’s ability to recruit muscles and “drive” the body’s ability to exercise.

7. Psychological/Motivational Model of Fatigue. The brain, even more so than the body, is the true black box in the whole equation of fatigue. This model is another attempt at integrating a number of mechanisms, and is predicated on the body integrating a whole host of inputs from throughout the body and then having a psychological response in order to minimize the risk of damage. In simple terms, the body screams out at the brain to slow down. How the brain deals with this clamouring from the body is at the heart of sport psychology.

Summary:
As we have previewed here, fatigue and our body’s ability to maintain prolonged effort is built on a complex house of cards. One or more of these systems becoming weaker can cause the whole system to collapse. In the coming months, we’ll examine each of these systems in greater detail to see what we can learn about improving the body and our training.

In the meantime, ride strong!