By Stage 9 of next year’s Le Tour, it’s highly possible we’ll have already seen some very good racing, but as a bettin’ man, the real race for Paris starts (as always) in the high mountains. The counter-clockwise route heads into the Pyrenees from Toulouse, as PEZ checks out the Tour’s second week.

Our PEZ panel of experts called some potentially good days of racing in Week 1, and if the wind-burn in Bittany doesn’t get ‘em the scorching sun as the race heads out to Toulouse on it’s first date with Pyrenean destiny surely will. 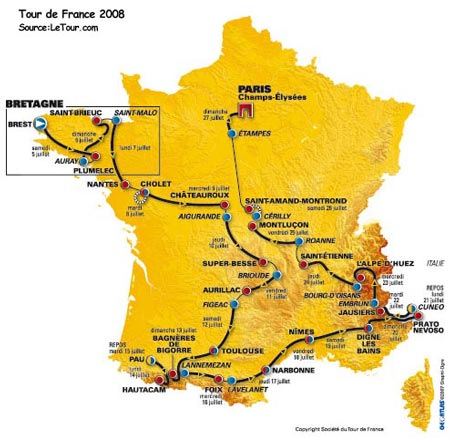 It’s usually hot down here in July – I almost melted on the airfield tarmac at the 2003 Tours finish in Toulouse (Flecha stole a solo win), but I survived to melt the next day at the time trial in Gaillac. 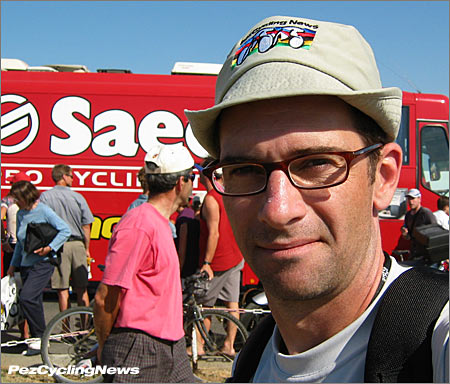 • Toulouse, 2003. It’s close to a billion degrees on the airport tarmac where the stage finished, but I was cucumber-cool in my very limited edition PEZ Fishin’ hat (only 2 were ever made, and I lost the other one~). This was back when we had about 10 readers, and way before PEZ kit existed… I’d lost my only sunglasses in the press room on Alpe d’Huez, and was reduced to spending two more weeks of the sunniest, hottest Tour on record wearing the ‘old-journo’ specs. That was some adventure… 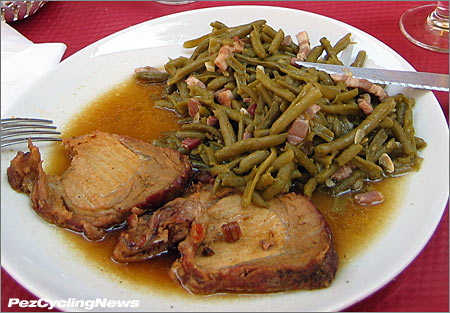 This isn’t the Giro – so the food is French too…. But scoring a great lunch is a no brainer for race fans who order the ‘plat du jour’ offered in most cafes and restaurants. It’s usually a nice plate of hot food, bread, wine or beer, and dessert for some cheap price.

Stages 9, 10, 11
Stage 9 carries the race from the flats to the jagged Pyrenean peaks via a long slog to two big climbs and a descending finish. Stage 10 is a shorter repeat, but with longer climbs and a summit finish at Hautacam. Then comes the first rest day, followed by a kinda weird mountain stage that skirts the lower mountains along the north of the Pyrenees as the race heads east. Definitely not the usual crossing of this mountain range, but potentially some exciting racing… 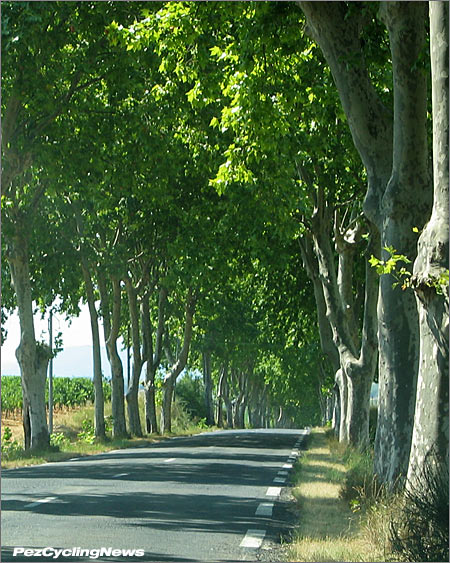 Leaving Toulouse enroute to the Col des Ares on stage 9, riders can enjoy the shaded tranquility of miles of treelined roads like this.

The Pyrenees: Stage 9 Toulouse to Bagneres-des-Bigorre, 222km
Stage Look The day’s racing will happen on the two hard climbs at the end, but the long slog to get there is perfect for a glory-seeking escape. The Peyresourde and Col d’Aspin double header come at the 150km mark, so the legs will be taxed. Both are classic Pyrenean climbs, but the run in to the finish features 20km of fast straight roads that will be tough to stay away on without some manpower.

Sim Sez: The Pyrenees I know really well. The Col d’Ares is a small climb that is wooded pretty much all the way up to the top. Some Riders might get away on this climb, but it will have no bearing what so ever on the overall of the Tour. Not a bad descent on the other side, basically a very non-descript climb (for the Tour, a great climb to ride up however).

The Aspin isn’t a huge climb, but it comes in only a few km from the finish after a valley run-in to Bagneres. The climb will most likely see the favorites all together but in a small group behind a solo rider (probably a breakaway will succeed on this stage). The Aspin descent is pretty basic taking you into Saint MArie de Campan where Christophe Eugene famously fixed his broken fork at the local blacksmiths in circa 1919, and the valley road is simple and straight along the Adour river. 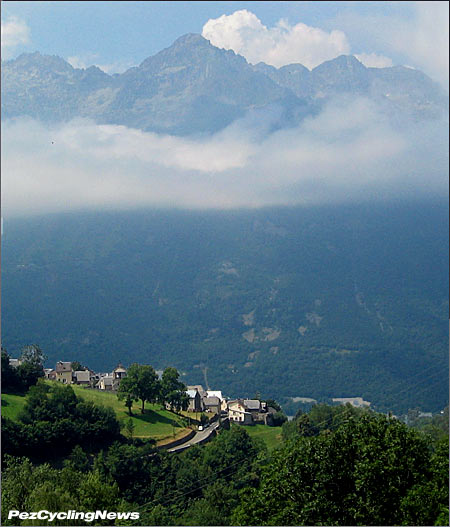 The race will descend the mighty Tourmalet into yonder valley, then climb the Hautacam. The Tourmalet a long, long grind to the top, but we haven’t seen a successful attack launched there in many years. Remember Ullrich attacking here in 2003, when Lance was playing possum at the back…? Suckkkkkeerrrrrrr….

The Pyrenees: Stage 10 Pau to Hautacam, 154km
Stage Look – It’s gonna be another slow start, leading to a GC battle on the final slopes to the ski station at Hautacam. It’s over 100km to get to the top of the mighty Tourmalet from the start in Pau, and with GC men saving their jam for the days’ final climb, expect an escape to go and possibly stick to the end. It’s Bastille Day, so look for Frenchman to animate the day.

Sim Sez: The Tourmalet is a beast coming in only 66 KM into the next stage. I have ridden that side of the Tourmalet some 20 odd times and it never gets easier. The weather is hugely unpredictable up there, and the first few kms of the descent down the other side towards Luz Saint Sauveur are pretty dangerous. After the town of Bareges part way down is a pretty straight and very fast road to the bottom. From here the riders will follow the Luz Gorge towards Argeles Gazost where they will make a sharp right turn and ‘shoot’ up the Hautacam.

The early slopes of the Hautacam are steep and it’s a bit of a shock to the system. I finished a TT up the first couple km of the Hautacam this year in a stage race, and hitting those slopes already going all out really puts you in the hurt box. Anyone not making it to the bottom in good form (because of chasing back on after the Tourmalet, or mechanical or crash) will get shelled immediately. 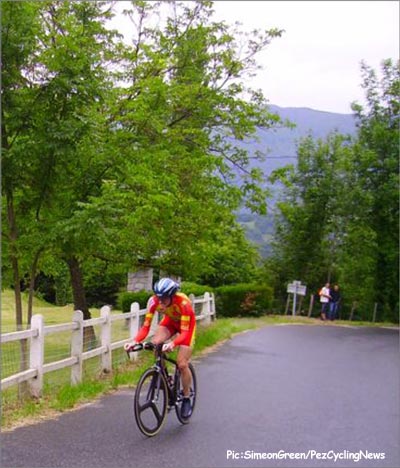 Sim jams the lower slopes of the Hautacam at the Tour de Lavedan.

I rode the rest of the climb the day after the stage race finished (not the best recovery ride), and Hautacam is pretty hard. There are some narrow sections of road, this will not be a problem on the way up, but could make getting all the riders and crowds off the mountain after the end of the stage a little painful. The top of Hautacam opens up to a big plateau with a fair bit of space and some stunning views. 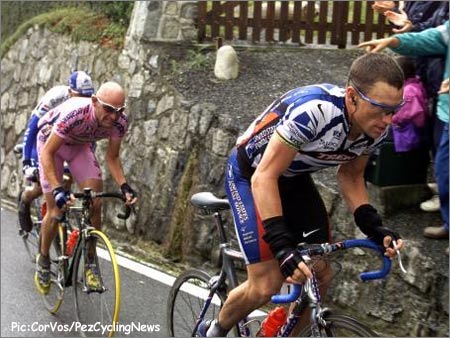 The Hautacam always serves up a nice plate of heroic battles. Here’s Lance giving Pantani the business in 2000.

Stage 11 Lannemezan – Foix , 166km
Stage Look – Although it follows the Pyrenees mountain range, the course will follow very small roads [and peak out around 1375m] – not the high mountains, but likely tough enough to make for some good racing. The only noted obstacle will be the Col de la Cruzette (11.6km avg 7.1% grade), which our quick look at the Michelin guide shows is on a very small road with a lot of twists and turns, and a section of 13% near the top. It comes around 25km to the end, so could be a perfect launch pad for a break, but likely the GC boys will be marking each other. 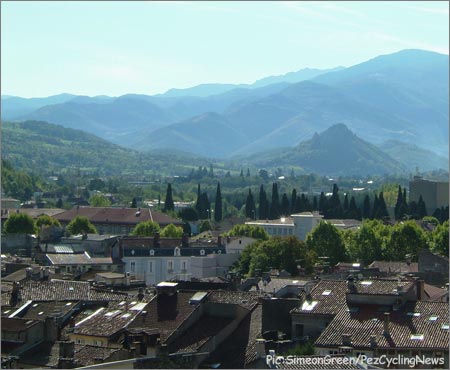 Sim Sez: The road is hilly and will see a breakaway get away, and stay away. The race will most likely go through Saint Gaudens (home of Sunn Bicycles) to finish in Foix, which is a big sporting town (also the area I recently won the King of the Mountains jersey in the Tour du something or other around there).

Pez-Man James Hewitt used to live not far from Foix in the town of Limoux, when he was chasing the dream of going pro in the early 2000’s. It didn’t quite work out the way he’d hoped, but now he’s back in London, completed his degree in sports marketing, and is engaged to a lovely lass named Anna. But we digress –

James Sez: “I’ve actually ridden and raced quite a lot around that area. What I can tell you is that the region around Foix/Bagneres de Bigorre is a really beautiful part of the Pyrenees. The climbs aren’t huge but the roads are heavy, quite rough in places which makes the riding harder than that found on the smoother more flowing ascents in the Alps. Also, there is often quite a lot of vegetation around which means that riders don’t have to get that far up the road in order to get out of sight of a chasing peloton. I think it will make for some good racing. Twisting roads, shorter, sharp climbs, technical descents. Sounds like breakaway material to me. (On a side note, it was a crash in Bagneres de Bigorre that landed me in hospital with a busted knee in 2005 which hastened my departure from racing.)”

That marks the end of the Pyrenees: the whole Toulouse Pyrenees are home to a bunch of local pros who will possibly be on the Tour: Nicolas Jalabert, Cedric Coutouly, Stephane Poulhies, Nicholas Portal, Botcharov. 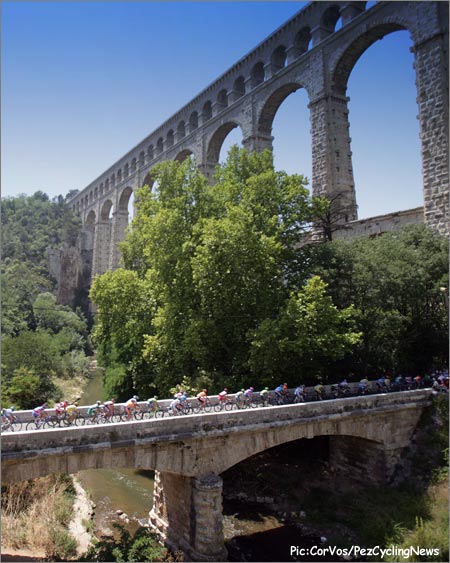 The three transfer stages across southern France are not without their sights.

Stages 12, 13, 14: Long Hot Days of Summer
Stage Look – These 3 days carry the race across the south of France to Alps, passing the sunny, hot Mediterranean and its treacherous Mistral winds. They’re all basically flat days, perfect for the sprinters, and the gc boys will be happy to rest after the Pyrenees. After Astana shelled the bunch last year and eliminated Christophe Moreau by attacking in these cross-winds, expect the gc boys to be much more attentive this year. The heat down here can also be oppressive, so expect to see the obligatory pics of domestics carrying 20 bottles…

GC will not change much here, and we’ll be ready for the final week dipping into Italy, crossing the Alps, then trough the Massif Central and the final TT before it all ends in Paris.

Tune in Friday for our look at the final week.