The absolute coolest moment of the 2009 Nevada City Bicycle Classic was seeing a kid slap five with Lance Armstrong. Toward the end of the race, a slightly bored kid across the course from me began high-fiving riders. Many riders who were out of the money made a small detour to the kid’s side of the course for a little luck or distraction. Lance, of course, maintained a laser-like focus, ignoring everything in his path – the crowd, the cow bells, the effort, the kid. He even ignored riders as he passed them going uphill – like he was a freight train with a tail wind and they were riding in mud. 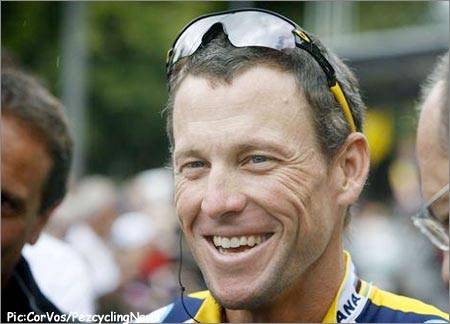 What struck me most was his intensity. You’ve seen his iconic expression on TV when he’s locked on to something important (or irritating) – like the crest of a climb (or Greg Lemond). But to see that look up close, and in person, is entirely different. It’s intimidating, withering, displaying singular concentration that sets him apart from all but the most accomplished champions. He never glanced around, never even looked over his shoulder – even when he was on his solo break. This was Lance, on form, test driving the attack he will no-doubt unleash on the side of an Alp or Col in July. From our vantage spot on the inside of the course, we could see downhill for about a hundred yards and absorb that intense energy, mouth open, ripped cannons for legs pounding out mega watts as he crushed the final pitch time after time. It was there that I looked into his eyes – and there I saw the soul of a beast. 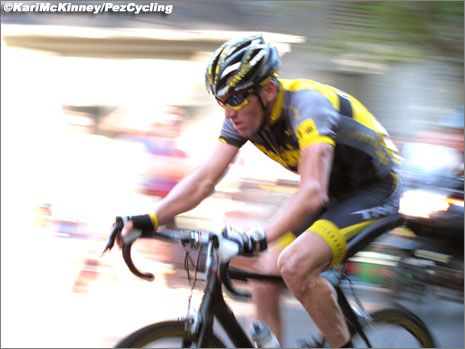 On his victory lap, Lance still wore his game face – until he reached our part of the course. With his business complete, he too reached out to slap hands, delivering a moment the kid will remember for life. The kid was ecstatic. The crowd erupted in a guttural roar of appreciation – not only for the win but also because this is what real winners do. This is not an unreachable star. This is Lance the champion, the survivor, the hero to millions, the father. 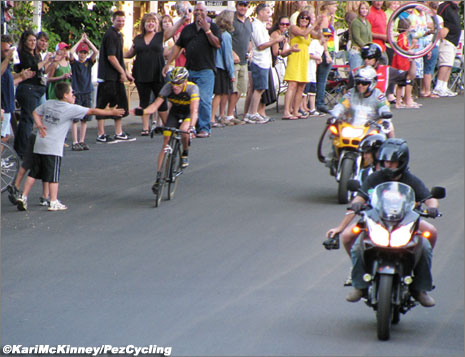 Fans further up the climb immediately jumped on course to slap fives as well. The final ramp, kept clear for racers until now, became an instant tunnel of humans reaching and grabbing at history. Lance slapped hands with two more kids who gyrated away, dancing and screaming with glee. He brushed a few more fans with congratulations then escaped, one last time, over the top.