Sanremo: It Is Time For A Change!

If Milan-Sanremo is any indication, all of Italian cycling could be in dire need of a change. As Duncan Steele observed over the weekend of La Primavera, most of the fans were “oldtimers”, while young cycling fans were scarce. All this and a dose of his usual scuttlebut from our man in Milan… 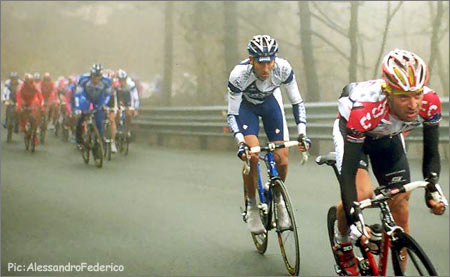 The bunch starts thinking about a chase on the Turchino.

Have you ever wondered what Pro-Cyclists do the day before a race? What do these races mean to the Italians? And what sort of people are watching, following and waking up early in the morning to meet, touch, and shout a few words to there cycling hero’s?

The Milano – San Remo is the 1st World Cup Race of the year. In the years it has changed then changed back, but the beauty of this race is that there are so many possible types of winners. Bettini showed that it is possible to break away, Cipo has shown that it’s possible to bring it down to the sprint and Zabel has shown that sprinting after 294km’s is slightly different than sprinting after 200km as Petacchi, the un-beatable sprinter, found out. We all agree… leave the race format alone.

The day before la Primavera, I hung out with CSC to see how they approach the race and what the general mood is in a team with a possible winner like Bartoli. In the same Hotel there was Phonak and Liberty Seguros. I said hello to Manual Saiz the Liberty DS who was propped up against the bar drinking coffee battling to stay awake. Saiz, who I interviewed last year for the ESPN Classics Lance Armstrong Biography is a charming man who tells me he’s feeling exhausted and maybe going down with flu.

I go up to Andrea Peron’s room where he is being visited by the team doctors. He shows them the scans and then they get to work. He is now feeling better. This weekend he will sit on a Spin Trainer to see if it hurts. It’s that bone that you sit on that has been broken. He is swimming most day to help heal the muscle bruising. 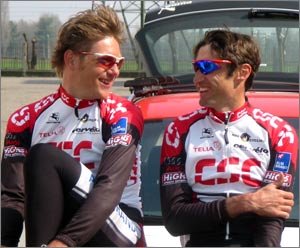 Andrea has bought some little cakes for all the team. The 1st to tuck in are Bartoli and Julich. Julich says if he eats one he’ll come in the top 20, two in the top 10 and three… he’ll win of course. He is looking very light, he isn’t the biggest of guys but even from the CSC team presentation, he is certainly looking thinner.

Bartoli just eats and eats then Jens Voigt comes rushing in to the room with a towel around his waist, wet and with shaving cream on his right leg. He was having a shower and shaving down when he heard that there were cakes in the other room and Bartoli was eating all of them. He grabs 4/5 of them and then explains to everybody the meaning of the DDR logo on my T-Shirt. 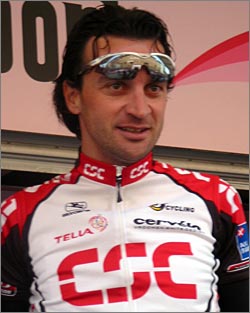 The general mood is good, Bartoli seems very relaxed. Andrea has a quick word with Riis and then there is the team briefing. At this stage I shot off in to the centre of Milan to collect the press cards for the race.

Saturday morning I go to the race sign in. Police, Staff, Journalists, Photographers, Team Staff and fans, and there are many many fans waiting for this moment to see, touch and talk to cycling hero’s. Strangely Cipollini arrives nearly un-noticed, everybody seems more interested in Petacchi and Bettini.

I then realise that the age of the average fan is very high… I mean in the 60’s. Now that isn’t a problem for me but does it reflect a problem for Italian cycling? Where are the parents with the young kids, the 12year old kids, the kids of tomorrow’s cycling? I then look around even more and do not find not only kids but ANY young people! The lovely thing about cycling is that it’s a people’s sport. No ticket to enter and it’s easy to have contact with the cyclists. 50 years ago cycling was a sport that represented Italy, it brought regions and towns together and the people felt part of it. Looking at the MSR I suddenly realised that cycling no longer represents this, in fact it is coming ever more difficult to organise these events for the constant pressure that the locals along the 294km route do not want their roads closed on a Saturday.

As I drive the route down to San Remo it becomes more evident that there were very very few young people waiting for this fantastic race to come thundering past. There were still the old generation out to support the race as they probably have done for the last 50 years or so even down to the 90 year old ladies in there slippers and woolly tights… but no kids! 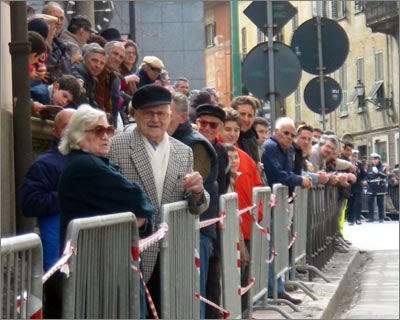 The real problem with Sanremo – does it still appeal to younger fans?

I followed the race last year and I noticed that the amount of people watching the race was a lot less. I know the weather wasn’t great but is Italian cycling healthy if no kids are watching cycling today, and where are tomorrow’s cyclists going to come from?

The other thing that has always baffled me is the finish line. Behind the finish line there is a assortment of people, Journalists, photographers TV personalities, friends, FCI members and team staff. There are no signed areas where you can and can’t stand, then 10mins before the race arrives the organisers try to bundle everybody out of the finish area! It’s mayhem. Wouldn’t it be easier to just give everybody an area to stay in that would not disturb the race finish instead of letting people in then trying to get them out??! The only people that have to be directly behind the finish line are the photographers.

Anyway, the race arrives and I see Freire wagging his finger at Zabel as if to say “ hey pal, I don’t think you won, I did!!”

It’s a great race, like most pro-cycling events but maybe in Italy something must be done to make it more attractive to the younger members of the Italian society. My thoughts didn’t go unnoticed as I spoke to the biggest Italian Cycling magazine CICLISMO about this, and also they had noticed the same thing. The opening page is going to be dedicated to this subject.

So, leave the race as it is but change the way it’s sold to the public. I’ve always said, and Andrea Peron agrees, that cycling is “ Old Hat” and it’s now showing.

A wave to all our young readers!
Ciao for Now
Dunc

Sound off to Dunc!
PEZ welcomes all forms of opinion, even hot air. Make it PEZ-worthy and we might just publish you in glorious pixelated black & white!

Major Events Start The Month Off!