Peter Sagan has received another award and we think he deserves more as he is Mr. Entertainment. Cyclocross action from the Azencross with result, report and video. In other cycling news: More teams name their Santos Tour Down Under rider line-ups, OBE for Chris Froome, Björn Leukemans hangs up his wheels, Lars van der Haar and Sabrina Stultiens build-up to the Worlds and video of the Movistar mechanic building a bike wearing a blindfold. Happy New Year to all!

TOP STORY: Another Award for Peter Sagan
World champion Peter Sagan has been voted Slovakia’s Sportsman of the Year by the Slovak Syndicate of Journalists for the second time. Lets face it he deserves it and as many other awards that can be thrown at him. Peter Sagan is what cycling needs, he’s fast, entertaining and always ready to either give it a go or please the fans. Cycling has been under the dark cloud of doping so much that maybe the fun has gone out of the sport. All this talk of who owns cycling and the back biting between organizers, teams, riders and the governing body is not helping. Yes, a lot of peoples livelihood depends on professional cycling, but maybe the beauty of this most wonderful sport has been lost along that cobbled road. Yes, it is a professional sport, but think of all those amazing attacks in the mountains, that perfect battle against the watch, the break that stayed away to the finish line or that last-second lunge by the sprinter to take the win. Lets hope next year there are more personalities in cycling, they can’t be the same Sagan as he is unique, but a bit more fun would help.

Bpost Bank Trofee – Azencross 2015
Tom Meeusen (Telenet-Fidea) won round 6 of the BPost Bank Trofee in the Azencross on Tuesday from Tim Merlier and Wout Van Aert both of Vastgoedservice-Golden Palace. Meeusen took his third win of the 2015/16 season by soloing for the final half of the fast race in Loenhout.

Last week-end’s double winner, World champion Mathieu van der Poel (BKCP-Corendon) was again the main protagonist of the day and tried to split the race as Wout Van Aert (Vastgoedservice-Golden Palace) was mixed up in a first lap crash and needed to change bikes after a smashed wheel. Laurens Sweeck (ERA Real Estate-Murprotec) took the intermediate 15 overall bonus seconds with second Merlier and Sven Nys (Crelan-AA Drink) in third. Van der Poel attacked on the next lap with Julien Taramarcaz (ERA Real Estate-Murprotec), but Van Aert held him at 10 seconds leading the chasers. At the end of the fourth lap a group of a dozen were together when Meeusen made his move and the others looked at each other to chase.

The chase group eventually got together for the chase, but by then Meeusen had 10 seconds and with mechanical problems to Gianni Vermeersch (Sunweb-Napoleon Games), Lars van der Haar (Giant-Alpecin) and Van Aert, the lead grew to nearly 20 seconds within two laps and by the final lap it was over 30 seconds and Meeusen had the win in the bag and gave him time to showboat to the finish.

In the overall of the BPost Bank Trofee, Wout Van Aert has 4:10 on Kevin Pauwels (Sunweb-Napoleon Games) and 7:57 on Sven Nys. 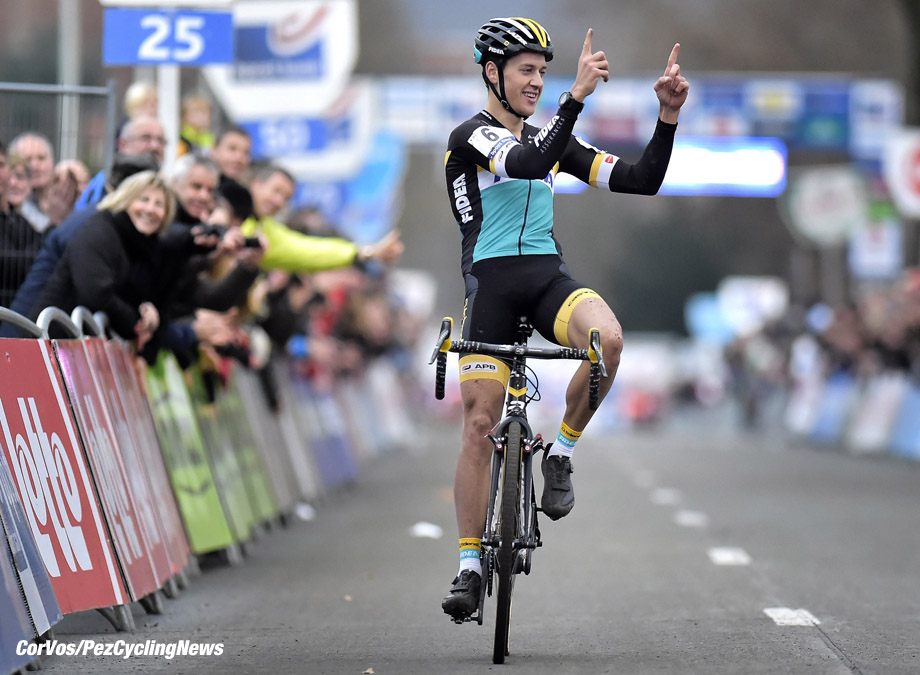 Race winner, Tom Meeusen (Telenet-Fidea): “2015 has been a difficult year for me. It’s nice to conclude it in this way. My rivals sincerely congratulated me here at the finish with being back at my level. I’m pleased to be back at my level too. The win came partly due to my technical skills and due to the timing of my attack but I won a round in the series anyway, I’m happy. I knew that once I had a bonus of 15 seconds it would be hard to get me back. I’m not losing time on the technical sections. If the chasers go faster than me on the long straight sections they pay the price in the technical sections. It’s a vicious circle but it helped that the chase was slacked up.”

2nd, Tim Merlier (Vastgoedservice-Golden Palace): “Just before hitting the final lap Wout rode by and told me he would lead out the sprint for me. I thought ‘oh no, just let me do my thing’ but it’s great we managed second and third place.”

3rd, Wout Van Aert (Vastgoedservice-Golden Palace): “Tom attacked on a moment where I wasn’t keen to take the initiative again. He played it well.”

Chris Froome said: “I am extremely humbled and very proud to receive this honour. It is obviously further recognition for the sport of cycling and it caps a fantastic year for me professionally and personally. It wouldn’t be possible without the help of my team-mates, coaches and of course the love and support from my family.”

Bob Howden said: “Chris’s OBE is well-deserved recognition of an extraordinary individual who represents the best of British sport – not only in terms of his achievements, and the hard work and dedication which earns them, but also in the way he conducts himself. He came under unprecedented pressure this year, which I know he accepts as a burden all sport’s great champions must carry, but the dignified manner in which he dealt with it was an example for us all.”

How to Climb a mountain with Chris Froome

Dimension Data TDU Team
The new team on the WorldTour, Dimension Data, will be in Australia for the Santos Tour Down Under from Tuesday the 19th to Sunday the 24th of January. The team will also ride the Down Under Classic in Adelaide on the previous Sunday the 17th. Sprinters Mark Renshaw and Tyler Farrar will be looking for stage wins, while Nathan Haas and Cameron Mayer will want a high place on the overall.

Movistar Team opens its 2016 season Down Under
Rubén Fernández, 5th overall a year ago, and stage winner Juanjo Lobato, are just two of the assets to be deployed in the multitalented Movistar Team that will ride the 18th Tour Down Under (Tuesday 19 – Sunday 24 January) and the traditional People’s Choice Classic (Sunday 17).
With just over two weeks to go before the start of the 2016 season, the 37th consecutive campaign by Eusebio Unzué’s set-up in the top flight of world cycling, the 7-man team has been named. It will also include Australia’s own Rory Sutherland, and Movistar Team debutant Nelson Oliveira.

Australia’s premier stage race follows its customary format, with stages that are consistently short (just 151 km for the longest, on Saturday 23) and nervous. The Corkscrew Road climb, on the way to Campbelltown, on Day Three (Thursday 21), and the double ascent of Willunga Hill, 24 hours before the conclusion in Adelaide, will once again be the cruxes of a race that is otherwise crammed with opportunities for the sprinters.

Movistar Team was the Best Team of the 2015 edition, supporting Rubén Fernández, fifth overall and third at Willunga, and Gorka Izagirre, eighth overall, not to mention Juanjo Lobato, who took the stage at Stirling.

Rory Sutherland in the TDU back in 2014:

Björn Leukemans has had to Retire
38 year-old Björn Leukemans has not be able to find a team for 2016 and has given up any chance of a contract at this late date. His present team, Wanty-Groupe Gobert, announced recently that they would not be renewing his contract for next year.

Sporza quoted the Belgian saying. “I deserved a better farewell, I’d really like to have raced in 2016, but some people have it otherwise. Both in Wallonia and in the Flemish races I managed well, but only winning counts. And sadly I never succeeded in a Classic.” Although he did win the Ronde van Limburg, Grote Prijs Jef Scherens and the Stadsprijs Geraardsbergen.

He turned professional for the TopSport Vlaanderen team in 2000 before moving to Palmans, Davitamon-Lotto, Vacansoleil and the last two years with Wanty-Groupe Gobert. During his career he has finished in the top ten of the Tour of Flanders (x4), Amstel Gold (x3), Paris-Roubaix (x2) Paris-Tours and Liège-Bastogne-Liège. He always performed well in Brabantse Pijl finishing in the top ten six times. 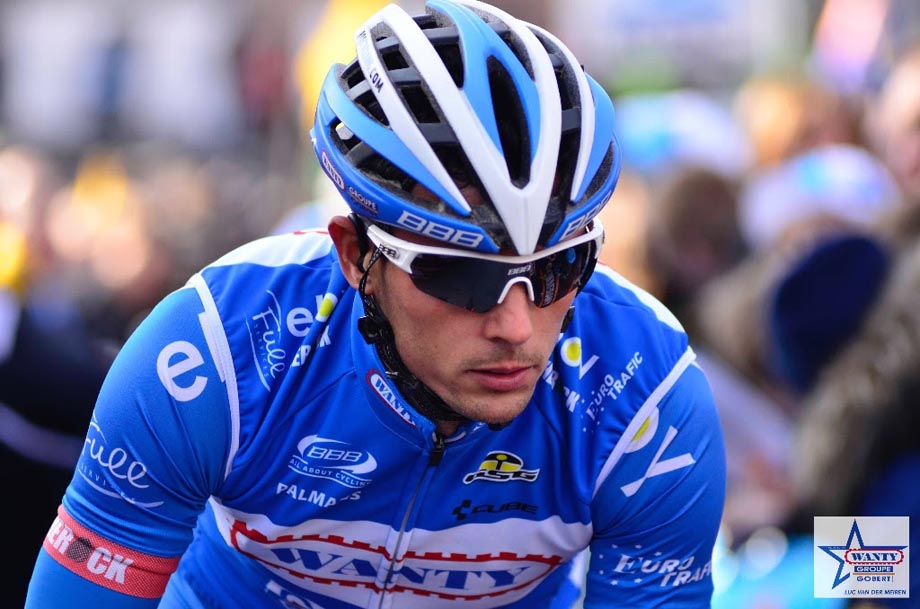 “December had a difficult start but a strong finish,” said van der Haar. “I got sick during a short training session on Mallorca, and then I returned to training too early, so I had a bit of a relapse. I’m currently moving toward the desired level, and I’m satisfied with the way I finished the month. My aim is to hold on to that level, and I hope to even improve a bit further.

“January will be an important month, with both the national and world championships, and I hope to add another jersey to my collection. My goal is to finish the World Cup strongly, ideally with another victory.

“I’m happy with what I’ve shown so far this season. The world championships course suits me, and I hope to perform well there, as I am really looking forward to it.”

Team Liv-Plantur’s Sabrina Stultiens (NED) reached the podium in her season debut, with a second place at Zilvermeercross, followed by 16th place in Namur, seventh at Heusden-Zolder and fifth at Diegem. Stultiens explains: “I had a good start in Mol. In the World Cup races I noticed my lack of racing rhythm and technique in comparison to my competitors, but I’m steadily improving.

“Last weekend’s races went quite well, as I was able to follow in terms of condition, but I made some small errors that kept me from competing for the win. January will be an important month for me, with the national championships and world championships.”

Building a Bike Blindfolded
The mechanic for Movistar is building up the team bikes while wearing a blindfold, so if there are any mechanical problems next season we know who to blame!

The PEZ INSTAGRAM
Take a look at our Instagram page for a live feed of #PeloPics, #DailyDistractions, and giveaways straight from your phone: https://www.instagram.com/pezcyclingnews

*****
The PEZ NEWSWIRE!
Don’t forget to check the “NEWSWIRE” section, you can find it on the homepage, just above the EuroTrash section. The bits of news that missed the EuroTrash deadline are in there, plus any news as-it-happens will be added there too.