TOP STORY: Chaves Voted Most Friendly Rider by Journalists
The Association Internationale des Journalistes du Cyclisme (AIJC) has given its annual award for the most media friendly rider in professional cycling to Colombia’s Esteban Chaves of the Orica-BikeExchange team.

AIJC president Raymond Kerckhoffs commented: “It is good that a talented Grand Tour rider like Esteban Chaves understands the importance of a having good relation with the media. This prize is also for his Orica-BikeExchange team who helped develop an excellent working relationship with the media throughout the 2016 season.” Adding: “The media is a vital link between the riders, teams, races and the cycling fans around the world. Chaves gained huge admiration for the way he raced aggressively and successfully in 2016 and for his sincerity and honesty when speaking to the media, in moments of both success and defeat. One of the highlights of the 2016 season was when Chaves gracefully accepted defeat at the Giro d’Italia and his parents warmly congratulated Vincenzo Nibali despite the Italian taking the maglia rosa from their son on the final mountain stage.”

The AIJC was created in 1976 to bring together journalists from different media and different nations covering professional cycling with the aim to promote solidarity among sports journalists throughout the world. The AIJC works with the UCI, race organizers, teams and riders to sustain and develop a professional working relationship and the correct reporting of the sport on a worldwide basis. The AIJC strives to constantly improve the working conditions of its members and as a consequence the reporting of professional cycling.

Hansgrohe Superprestige – Diegem 2016
Dutch champion Mathieu van der Poel (Beobank-Corendon) and World champion Wout van Aert (Crelan-Vastgoedservice) fought out yet another close battle on Friday evening in Diegem and the Dutch boy took his fourth race victory in a row in the Superprestige race. Van der Poel made his move on the final section of sand which was too much for Van Aert. Kevin Pauwels (Marlux-Napoleon Games) again took 3rd place on the podium.

The action started from the gun as Van der Poel and Van Aert shot off from the line and soon had the lead on the others. The Dutch champion had said he was suffering from a cold, but it was hard to see that it was causing him any problems.

European champion Toon Aerts (Telenet-Fidea), Gianni Vermeersch (Marlux-Napoleon Games) and Pauwels tried to pull them back, but Vermeersch had a mechanical problem to finish well down in 22nd place. Aerts looked to have 3rd place in the bag as he dominated Pauwels up until the final lap where the European champion lost his strength for Pauwels to pass him and head for the podium place.

Up front; Van Aert and Van der Poel were like two prize fighters attacking each other in turn, although the Dutchman seemed to have the edge through the sand section. The pair knew they had an unsurmountable lead and so on the final lap the pace eased p for a bit of cat and mouse.

Through the football pitch, Van der Poel started to put the pressure on and when the hit the sand it was full gas. The Dutchman took a gap and even had time for a bit of show-boating on the final jump, Van Aert could not close before the finish line. 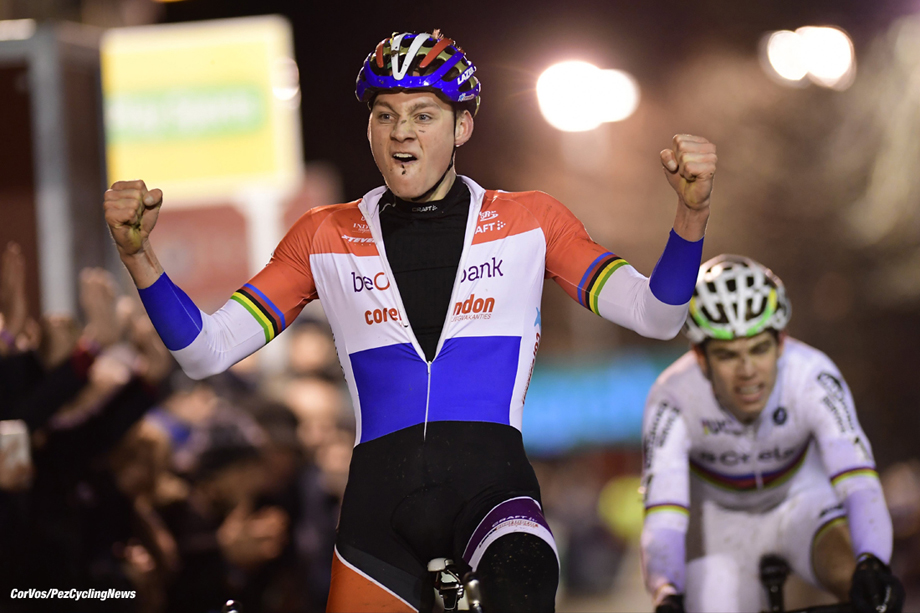 Race winner, Mathieu van der Poel (Beobank-Corendon): “It just happened. I reached it with speed and sometimes it’s just faster to jump. I was really happy with this win because I didn’t expect it. Because of my cold I told my folks that I wanted to take as much advantage as possible in the first half of the race, to make sure I wouldn’t lose more than a point on Wout if I got dropped.”

2nd, Wout Van Aert (Crelan-Vastgoedservice): “I wanted to be ahead of him at the sand section but I failed to pass him because he pulled off a real sprint there. The meters I lost in the sand and at the barriers are those that I lack in the end. I came close but I should’ve been in front at the sand pit.”

Van der Haar Returns on Monday
Lars van der Haar (Giant-Alpecin) will make his return to competition in Heusden-Zolder on Monday (today). In November he suffered a tear in his left rectus femoris muscle while racing in Ruddervoorde.

Van der Haar said in a press release: “I am happy to restart at Heusden Zolder. I’ve had some tough weeks and worked really hard on my recovery. It was still uncertain for a while if I would be able to race again in 2016, but I am really happy to do so. This will close my period at Team Giant-Alpecin nicely, and to make a fresh start in January. Rather than focusing on results my goal will be to finish the race on Monday.”

Team Doctor Anko Boelens confirmed: “It’s been almost two months since he sustained the injury and Lars’ recovery has progressed nicely. After extensive tests we now feel that Lars is ready to participate in racing again. Ultrasound scans show the lesion has healed well and further tests on the bike show his leg is strong enough to get back racing.”

Depending on Monday, Van der Haar may also ride the DVV Trofee Azencross in Loenhout on the 29th of December.

Quintana to go for Giro/Tour Double
2016 Vuelta a España winner Nairo Quintana (Movistar) announced to Colombian newspaper El Tiempo that he will go for a Giro/Tour double in 2017.

Quintana said: “My schedule is already set. We will go to the Giro to try to do our best but with the goal to come out in good shape for the Tour. The goal is the Tour. We will go on the Giro with a lot of motivation, determination and a great team, to see what we can do. We would like to win the Giro but we have a commitment for the Tour. That’s why we face this challenge, because it is a special date to celebrate (the 100th Giro). I have won (the Giro), and why not do it in 2017?”

Quintana confirmed that he would not defend his Vuelta title in 2017.

The Best Of Nairo Quintana:

Same Again for Froome
Sky’s Chris froome has told la Gazzetta dello Sport that his 2017 season will be much the same as 2016. The three time Tour de France winner will start his season in Australia at the Cadel Evans Great Ocean Road Race and the Jayce Herald Sun Tour. Then after three-weeks of altitude training in South Africa he will ride the Volta a Catalunya in March followed by the Tour de Romandie and the Criterium du Dauphiné before the Tour de France. Froome may also repeat his ride in Liege-Bastogne-Liège which competed in last year.

Thomas De Gendt back to Mont Ventoux
Thomas De Gendt, the last winner on Mont Ventoux, returned to the mythic mountain this autumn. When Thomas won the Tour de France stage this year, the finish was at Chalet Reynard. Thomas went back to Mont Ventoux to cover the last kilometers of the climb. This time he stopped at the monument of Tom Simpson, who died on Mont Ventoux in 1967. That will exactly be 50 years ago in 2017. Together with Flemish volunteers, Thomas restored the stairs towards the monument for Tom Simpson with Soudal products.

Surgery for Enzo Wouters
Yesterday, Lotto Soudal neo-pro Enzo Wouters underwent keyhole surgery on his knee in Herentals. Doctor Toon Claes removed an inflammation on the capsule of the left knee. Such an inflammation is an annoying injury for cyclists, because of the many pedal strokes.

Enzo Wouters: “Of course it’s a setback when you have to undergo surgery after the first training camp. According to the doctor a lot of inflamed tissue was removed and the operation was definitely necessary. ‘Patience’ will be the key word during my rehabilitation. If I take the necessary rest, I will be back in a few months. Of course I was keen on having a good start of the season, but now that start has to be postponed.”

In about three weeks Wouters can carefully resume his training on the bike. 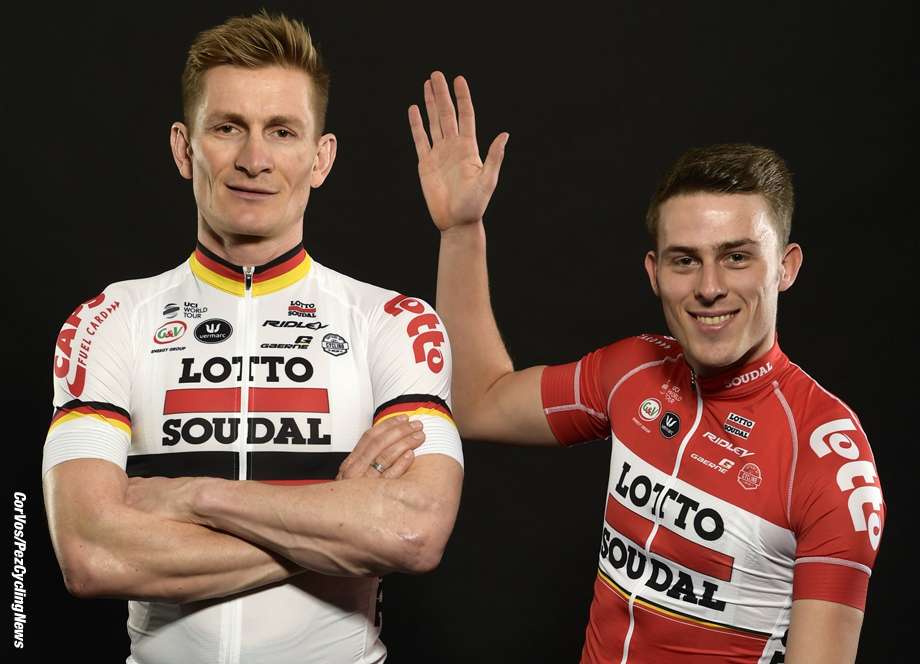 Marc Soler, Jasha Sütterlin extend through 2019
Both the Catalan – brilliant winner of the Queen stage in last season’s Route du Sud – and the German – outstanding all over 2016 – are poised to ride for another three years in Movistar Team colors
The Movistar Team announces that Marc Soler (Vilanova i la Geltrú, ESP; 1993) and Jasha Sütterlin (Freiburg-im-Breisgau, GER; 1992), two of its most promising riders, have both re-signed with Eusebio Unzué’s squad through the end of 2019, both having their previous contracts running out at the end of 2017.

Soler, an excellent climber and a hope of future for Grand Tours with still much room to improve, will fulfill his third season in Movistar Team colors in 2017. As part of the UCI WorldTour’s best team, he’s grown calmly while offering two glimpses of his unquestionable quality: the overall victory in the 2015 Tour de l’Avenir and a win in the Queen stage of last June’s Route du Sud, supported by Nairo Quintana. 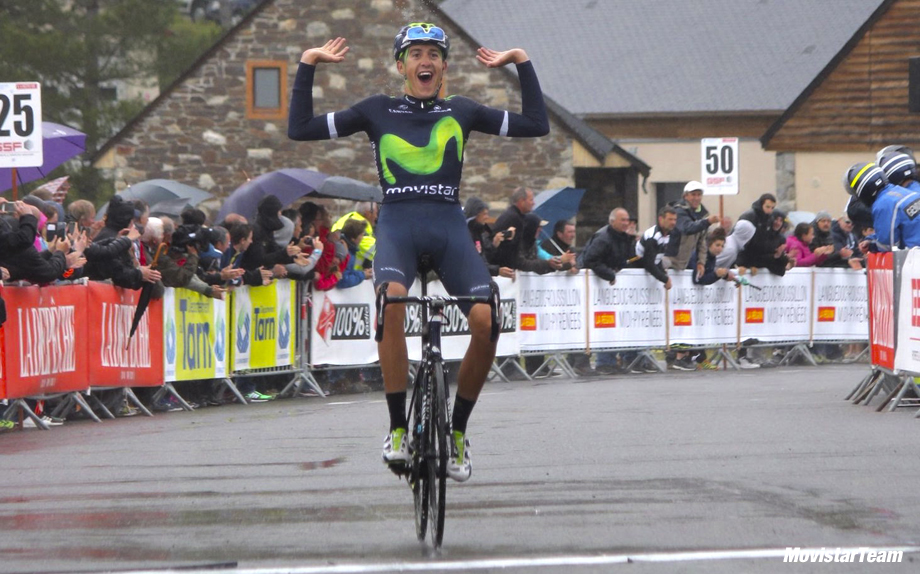 In turn, the Blues have a magnificent rouleur in Sütterlin, a powerhouse capable covering hundreds of kilometers at the front of the pack or shining in the always-difficult Northern campaign. 2017 will be his fourth year within Unzué’s ranks, having debuted last year in the Giro and also collected a silver medal in the German TT Champs, behind Tony Martin, or an 11th-place GC finish in the Eneco Tour, where he came 3rd in Breda’s ITT and rode courageously over the cobblestones of Flanders on the final day. 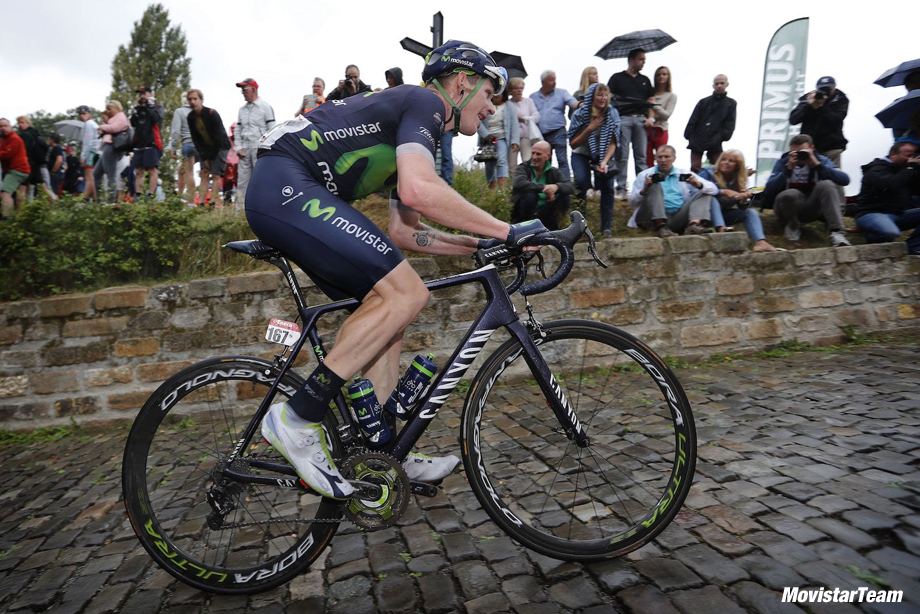 We are happy to present our new video. Check it out!

In the Mud at Home?
Get the home trainer out and try a bit of cyclocross.

The PEZ INSTAGRAM
Take a look at our Instagram page for a live feed of #PeloPics, #DailyDistractions, and giveaways straight from your phone: https://www.instagram.com/pezcyclingnews

*****
The PEZ NEWSWIRE!
Don’t forget to check the “NEWSWIRE” section, you can find it on the homepage, just above the EuroTrash section. The bits of news that missed the EuroTrash deadline are in there, plus any news as-it-happens will be added there too.

Christmas Greetings From the World Of Cycling!