100 Kph On A Track? Carsten Podlesch Can.

Stayer racing – extreme derny/motorpacing was once a regular part of the Track World Championships, but in 1994 it was dropped, leaving an eternal World Champion in Carsten Podlesch, and leaving an intriguing subculture at most German Six Day events. Ed Hood takes us into the intricacies of stayer racing.

Task Specific Bikes
When it comes to specialist bicycles they don’t come more ‘task specific’ than the bikes used by the ‘stayers’ who hurtle round the tracks of Europe at speeds of up to 100 kph behind BMW motorbikes. The discipline was dropped from the UCI world championship roster after Palermo Sicily in 1994 as part of a bid to streamline the championship programme. It has to be said also that allegations of ‘arrangements’ and cash changing hands among the motor bike drivers to determine who won didn’t help its cause. 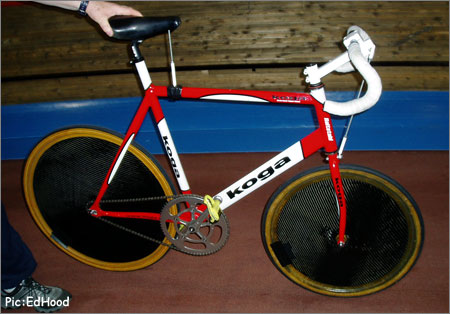 These things are not in anyway to be confused with beautiful.

Stayers Live On In Germany
Motor paced racing is still alive and well in Germany however, where no Six Day is complete without the ‘Stayer’ Six. The bikes are anything but attractive and exist for one purpose only – to achieve high speeds behind the pacing bike. Frames are always steel; strength and safety are everything at speeds which can exceed 60 mph. 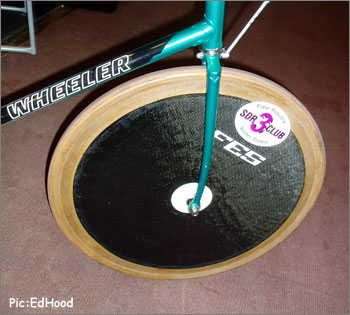 All Tracks Are Not Created Equal
Front forks are reversed and a 600 front wheel fitted to get the rider in close behind the pacer, the distance the roller is set behind the pace bike is set according to the track; on a slower track the roller will be set further back so as the slip-streaming affect is not as pronounced; on a big, fast track the roller will be closer to the motor bike enabling higher speeds to be achieved. 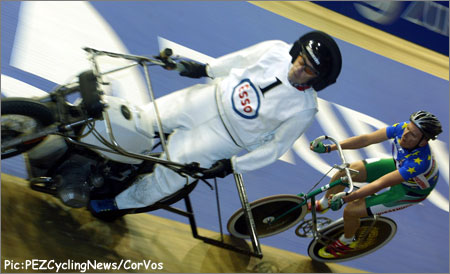 Gimme Some Draft
The riders sit as far forward as possible, again to grab benefit from the pocket of still air behind the BMW. They also sit in a pronounced upright position to facilitate good breathing in the hot, smoky and exhaust fume-laden air of indoor tracks. This imposes a big loading upon the stem which always has a support strut attached to the fork crown. 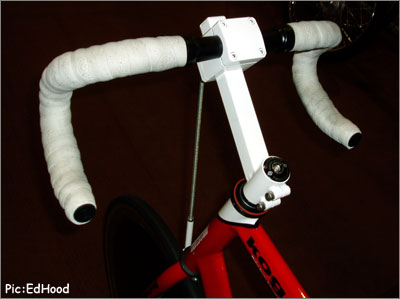 Extreme Strength
Some of the stems employed have stiffening gussets added; some are home-made from box section steel – pace following bikes are never light. This position also brings the saddle forward, the seat pillar is reversed and a support is fitted from to the saddle nose to the down-tube. 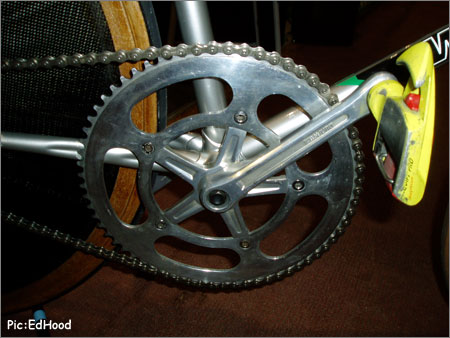 66 teeth on that front chainring…maybe down Mt. Everest.

Compact Gearing? I’ll Double You
Saddles are short, wide and must be comfortable, the G-force which forces 6-day rider’s crotches into the saddle on the steep bankings and can cause terrible pressure sores is even more pronounced at motorway speeds. Gears are massive to facilitate the high speeds, 66 x 16 is the gear of choice at Berlin, transmission is 1/2” x 1/8” and the chainrings weigh a ton. 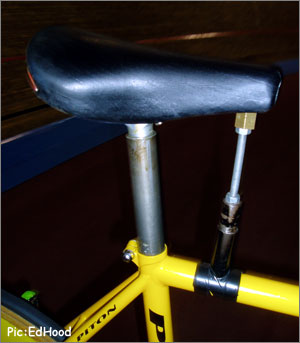 Now that is a saddle.

Disc rear wheels are now standard and most riders have adopted them for the front too, although some ride front tri-spokes and the odd, flimsy looking spoked front is still in evidence. 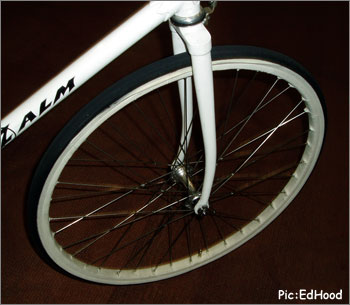 Scared Of Your Tires?
Tubulars as well as being stuck to the rims with contact adhesive have ‘bandages’ bonded to the sidewalls which are then stuck to rims to ensure that the tyre stays attached to the rim in the event of a puncture. 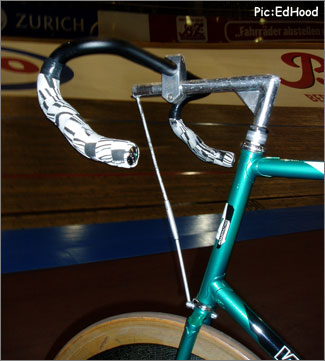 These things might be good for running into walls with. Could anything possible fail? Check out the extra taped tubies.

Heavy and unattractive the bike may be, but when there are seven of them battling it out on the bankings, amid the roar of the engines it’s certainly spectacular. 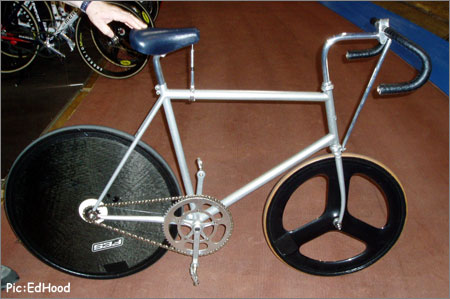 The King Of Stayer Racing
Carsten Podlesch has been world motor paced champion since 1994 and will be for ever. Podlesch won the last UCI ‘open’ world motor paced championship in Palermo that year – then the boys in blazers from Geneva scrapped the event leaving the affable 36 year old Berliner as champion in perpetuity. His uncle Rainer Podlesch was a world champion before him and it was from him that Podlesch developed his interest in the wall of death of ‘stayer’ racing. This is his 18th season and as well as his 1994 ‘open’ worlds win he was world amateur champion in 1992 and has been three times European champion.

At 36 he is no longer a full-time pro and has gone back to college to prepare for the day when he decides he doesn’t need the smell of BMW exhausts in his nose any more. He can ride around ten paced meetings a year including racing every night at the Berlin six day. In the summer he rides criteriums to keep in shape. 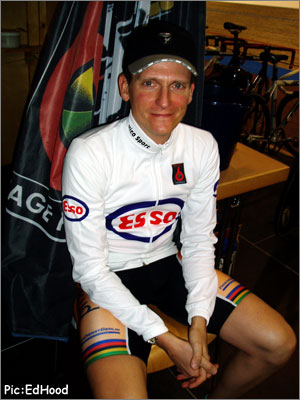 Too Many To Count
Apart from his major successes he doesn’t keep track of how many wins he has had behind the big motors; ‘too many to count,’ he smiles. The highly specialised equipment required can still be obtained; ‘no problem’ Podlesch says, with Vittoria ‘stayer’ tyres still available.

The relationship with the motor bike driver is crucial; ‘we talk before every event and decide on tactics, it is crucial that you and your pacer are in tune.’ He has been with current pacer Helmuth Baur for a year now and judging by the wins they racked-up at Berlin they are in good harmony.

Milano For Speed
When asked if Berlin is a fast track he replies; ‘no, not really the roller is set well back from the motor bike to keep the speed down. Milano is one of the fastest, we run to 100 kph there [that’s 63 miles per hour!]

Asked to describe his riding style he smiles; ‘with my head!’

And does he ever get scared behind those beasts? Another smile; ‘No, I never do.’ I did – just watching him!