Amsterdam SixDays: Get the Groove!

It’s nearly winter again – and in Europe, that means Six Day racing! PEZ got rolling at the very first sixday event this winter, the “6-daagse van Amsterdam” in late October. Covering the racing, chatting to the pro’s, enjoying the scenery and sight-seeing in Holland’s naughty capital…

by Florian Wenk and Renй Mueller 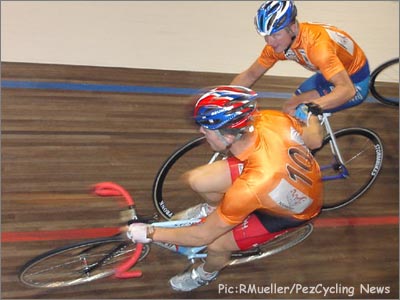 The Pronk brothers whipping the competition.

Six day racing is not the most well known – or at least, understood – of cycling disciplines. In general, it combines some of the most interesting events of track cycling, lots of music, culinary specialities, and festivities of the host city. This makes competing more fun for the riders – and watching the racing more fun for the public.

They Ride For How Many Days?
As the name says, the race is held on six consecutive nights. This used to mean six days non-stop racing, but nowadays riders keep their power to show their abilities to the public in the evenings only. The main event is the well-known ‘madison’, a race where teams of 2 riders are on the track at the same time, but only one of them is in racing at any one time. With a whiplash handshake, this rider passes his speed to his team-mate, who joins the race for another 2 or 3 laps until he reaches his mate again. This takes a lot of acrobatic talent, and you can see some great steering talents riding the bikes! 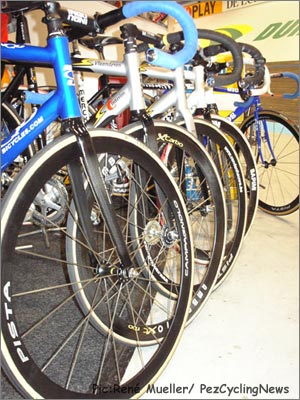 Then, there’s a so-called ‘drop-out race’ with several intermediate sprints. There, the last rider has to leave the race – and the winner is always the last man standing. Generally, the riders gain points in each event, placing the teams in a 6-day overall ranking. 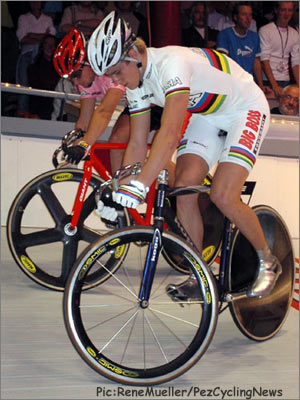 Rene Wolff and Theo Bos try to out stand each other.

But it even get faster down on the track: In the derny’s race, a motorbike is pacing the riders. Again the fastest man wins, but the dernys keep the speeds eve higher. And there’s another high-speed event which was held in Amsterdam: the team time trial, where 2 riders of the madison team take up speed together, and the 2nd rider has to go for the final lap himself – a kind of olympic/team sprint not performed by sprinters but madison riders which does fascinate the crowd! 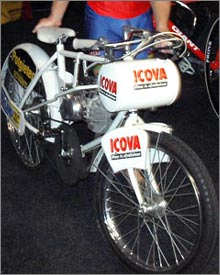 To us North Americans, the derny is an often mis-understood concept.

In addition to those events, there are the giants of the track taking part in thrilling competitions: it’s sprinter time! In Amsterdam, 20 year-old World Champion Theo “Big Boss” Bos and his Dutch team-mate Martin Benjamin were battling the two Germans Jan van Eijden and Renй Wolff, competing in classical sprint competitions as well as keirin and time trials. And it was quite funny to watch the sprinters relax while the madison riders were on the track – joking and laughing makes being a sprinter even cooler! And sometimes, there’s even the chance to have a very relaxed ride on the track – on a motorbike!

Drafting at 60kmh and 45 degree banks. You gotta try it!

Anyways, if you’ve got mates who aren’t interested in cycling (yet) whom you’d like to take to a really cool cycling event, you should do try the sixdays! You can follow the racing as well as getting some really good food (especially if you head down to the VIP area) or enjoying some great music. Well, to be honest, it depends on the band/DJ who is playing, but often, each night has got a certain topic (of food and music)… 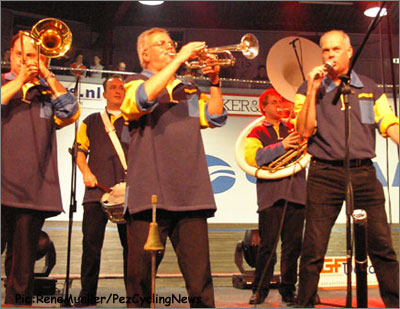 After a couple of those Amsterdam ‘Space Brownies’, even these guys sound good. 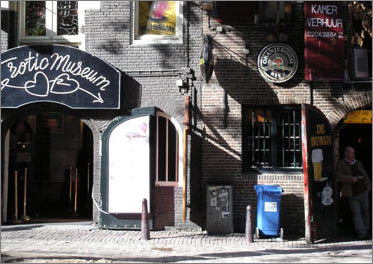 There’s lot’s to see and do in Amsterdam.

Generally, Six day racing provides the unique chance to combine cycling with visiting great a European city as well. It’s a cycling vacation even the little lady can enjoy – So: Cya on the track! 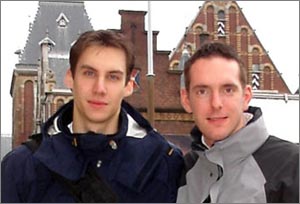 About Renй Mueller (left):
Renй is an amateur road racer from Frankfurt/Main, Germany, majoring in information technologies. When not racing his bike, he is doing sports photography and covering events in and around Germany for PEZ. For more information, have a look at his website www.rmffm.de

About Florian Wenk (right):
Florian is an amateur road racer and PEZ- Man in Germany, studying medicine at the University of Wьrzburg. He’s currently doing his Ph.D. in endurance training and testing, focusing on metabolic and ergospirometric parameters in cycling performance. You can contact him via [email protected] or have a look at his website www.florianwenk.com