Being in the business of reporting daily news, we’ve become even more aware of how quickly things move on, and how soon we forget what happened even last week. Jan Didier is a cycling fanatic whose passion is for the sport’s rich history, and who reminded me that cycling is so much more than this year’s Tour or World Championships…

Great battles have been fought since the sport began, and these stories become even more fascinating when we remember that the roads were not paved, the bikes weighed upwards of 50 lbs., technical support and assistance could be provided only by the rider himself. Jan is like a library of historical race information, facts, and the kinds of stories that are best heard over a pint of your favorite post-ride beverage… you can read his own interesting bio at the end of this article.

This story is about Roger Walkowiak, winner of the 1956 Tour de France. But unlike TDF winners today, who seem guaranteed superstar status, Walkowiak’s story is one with a sadly tragic end… We hope you enjoy the reading…

We first ran this story on November 2002, but it’s worth a second read on a winter Sunday… 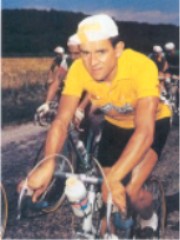 Roger Who?
Who cared about Roger Walkowiak, a modest rider in the French North-East-Centre regional team, at the start of the 1956 Tour de France ? No one.

Except for his wife Pierrette of course, whom he married a day before Christmas 1955. And who couldn’t imagine what kind of a late wedding present her Roger would offer her 3 weeks later.

First Yellow
The 1956 Tour started as expected, with the fast Andrй Darrigade winning the first stage and taking the first yellow jersey. He lost it for 2 days to Gilbert Desmet, but regained it in Caen at the end of the 4th stage. He was still wearing it at the start of the 7th stage, from Lorient to Angers, not knowing how decisive this day would be. 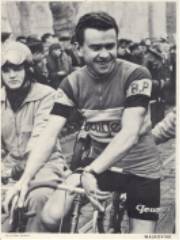 While all the favourites were watching each other, a group of 31 riders took off. No reaction in the peloton, and the escape group reached Angers with an advance of 18’46”. Alessandro Fantini won the stage and the yellow jersey went on the shoulders of … Roger Walkowiak.

The Decisive Stages
Walkowiak’s team manager, Ducazeaux, warned Roger that it would be too tough to try and hold on to the jersey stage after stage, and that it might be better to lose it … in order to re-conquer it later on, when closer to Paris. 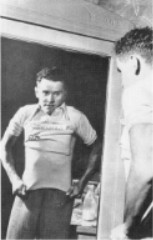 And Roger Walkowiak did what he was told to do. 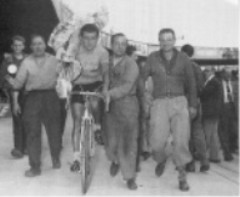 He was not.
He deserved to win that Tour, because he had been stronger, smarter, braver and more consistent than all other riders that year. That is why he should not be considered as a footnote in the Tour history books.

On the contrary, he should be reminded as one of the greatest Tour winners ever, because what he has accomplished in 1956, no one has ever done it again until today.

ABOUT JAN
As the son of an army officer who was a huge cycling fan, and who knew a lot of riders personally, Jan’s interest in cycling was developed in his early years.
He began collecting old books and magazines, cycling cards, going to races … and he became a real “cycling nut”.