A Morning At The Races: Three Days Of De Panne

Roadside PEZ: I woke up this morning warm and cozy in my bed, doing some work, when I realized: oh, the stage start of today’s second stage of the Three Days of De Panne is two kilometers from where I’m now laying. After some light debate, we decided that it was time to go have a look at the scene in Oudenaarde’s Grote Markt.

How often does THAT happen? How many times can you say you’ve woken up in the morning and had a major race start just a couple thousand meters down the road? For me, up until this morning, my total was a big fat goose egg.

After some vacillating and abject laziness, I realized that it would be wholly unacceptable if we didn’t grace the stage start with our presence. We jumped out of bed, because of course we had waited far too long to get going, and got our assorted gear together for a visit to the stage start. 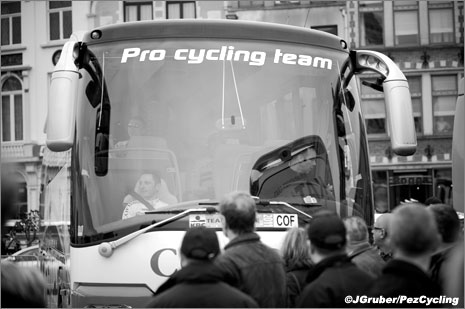 We’re currently staying with former PEZ-Homeboy Gregg Germer and his wife, Holly at their fantastic house, The Chain Stay. The couple have a beautiful seven room house for the sole purpose of housing bike racers, and cycling tourists. It’s a great concept, and they’ve pulled it off very well. More on that soon though!

We hopped on our bikes and headed to Oudenaarde’s beautiful main square, the Grote Markt. The whole area was filled with all of the vestiges of a bike race: team buses, stage, hordes of people milling about, and an enjoyable sense of controlled chaos.

The starting area was open to the crowds, so everyone got their chance to gawk at their favorite bikes from the assembled teams. Some were more welcoming of viewers, whilst others did a fine job of cordoning off their own little space. Of course, this is when you’d typically expect to hear some comment about Sky and their wall from 2010, but they kept their property surprisingly open, so we got a nice chance to get up close and admire their fine Pinarellos. 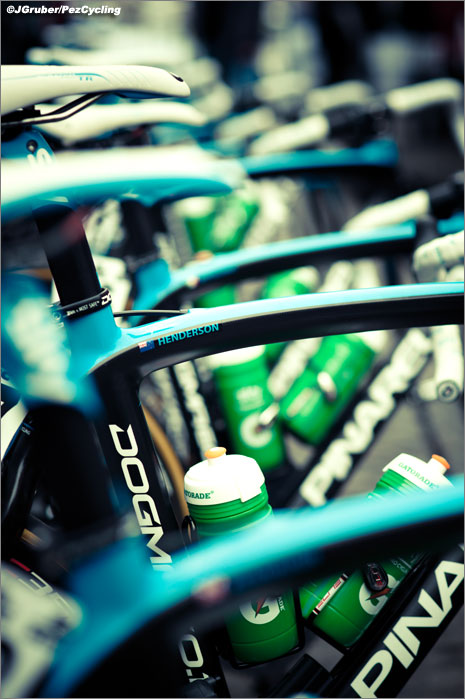 Like all young children in a giant candy store, we found ourselves spinning around in circles with no idea what to do first. I started taking pictures, because that seems a good solution in all moments of confusion, while Ashley opted for a little solo adventure in search of creds. 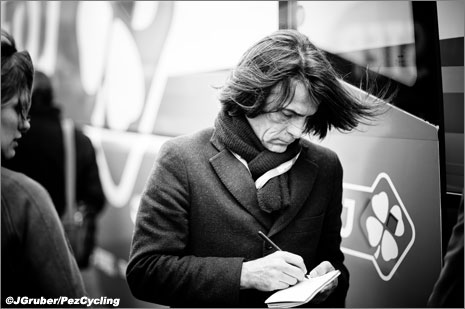 I soon bumped into Ed Hood’s journalistic hero, Philippe Brunel. I took a picture for him. Wish you were here, Ed! 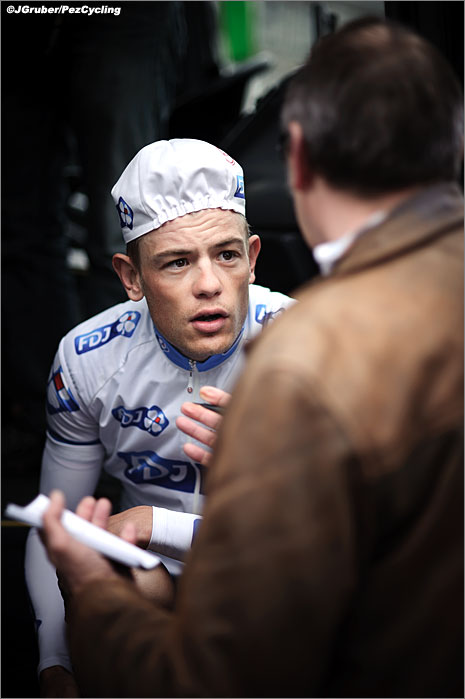 After getting distracted by Brunel’s classiness, I glanced to my right to see what he was actually working on – an interview with one of this year’s biggest sensations, Francaise des Jeux’s cyclocrosser turned fantastic road racer, Steve Chainel. Chainel was one of the few racers we saw this morning willing to venture out of the warm confines of the team bus to do an interview. Considering his attacking style, his already legendary grimaces, and a penchant for communicating…we should have ourselves a new French hero to rival Voeckler in 3…2…1… 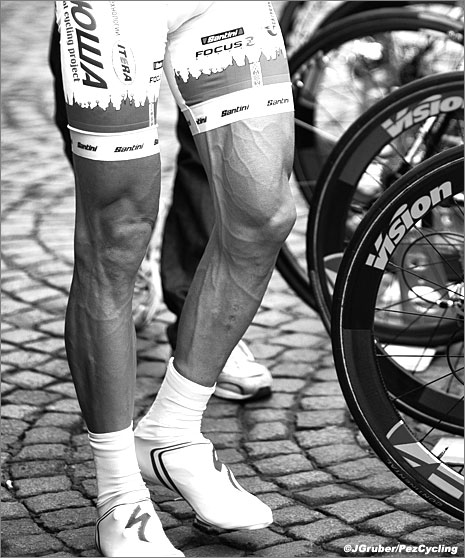 The stroll continued until I was stopped in my tracks by these two pistons of pain belonging to former Gent-Wevelgem runner-up Alaiksandr Kuschynski. They are distracting to say the least. 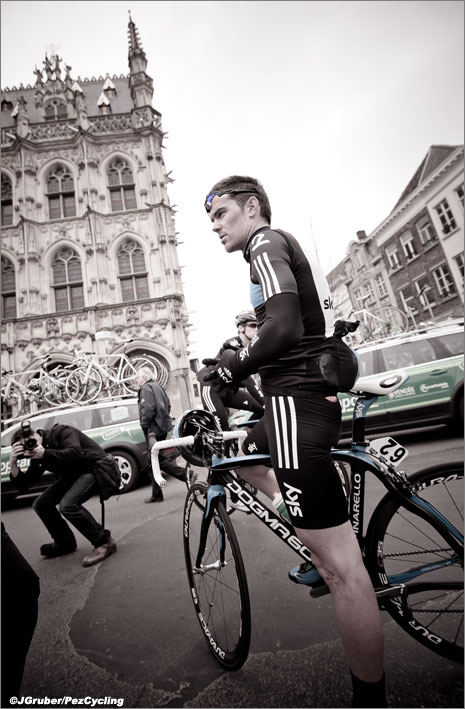 Continuing on my merry little way, I ran into one of Belgium’s, I would say one of the cycling world’s, best photographers – Kristof Ramon. I’ve been a fan of his work since the first time I saw it almost two years ago, and being a major camera dork, I think I was in more awe around him than any professional cyclists. He’s the real deal. Check out his pictures! 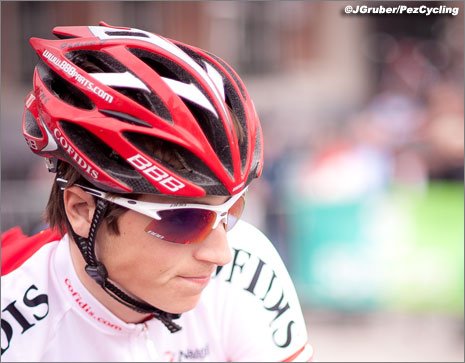 After chatting with Kristof for probably far too long (I have a habit of gushing like a little girl when I get around heroes), I got back to roaming and heard some loud cheers go up as a red and white clad rider rolled up to the sign in area. Ah yes, it was Belgium’s young prodigy, Jens Keukeleire. Keukeleire enjoyed a neo-pro season that would make grizzled old veterans jealous when looking back at their entire career. He has been a bit quieter so far in 2011, but it shouldn’t be long before he’s romping to many a victory. 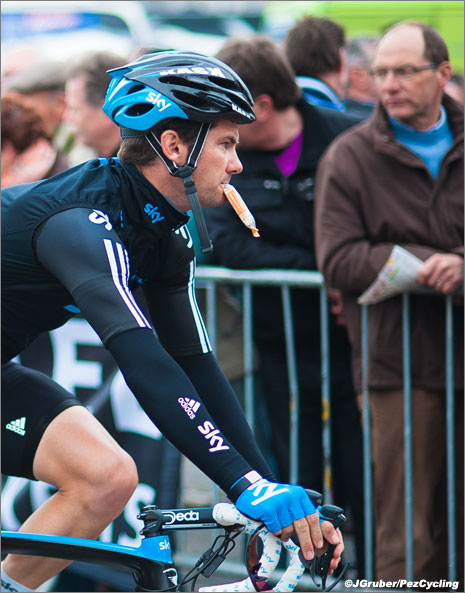 Team Sky rolled up next. Greg Henderson was still working on breakfast when he headed for the stage. Henderson, an incredible sprinter, also holds another interesting talent: looking like Jack Nicholson. 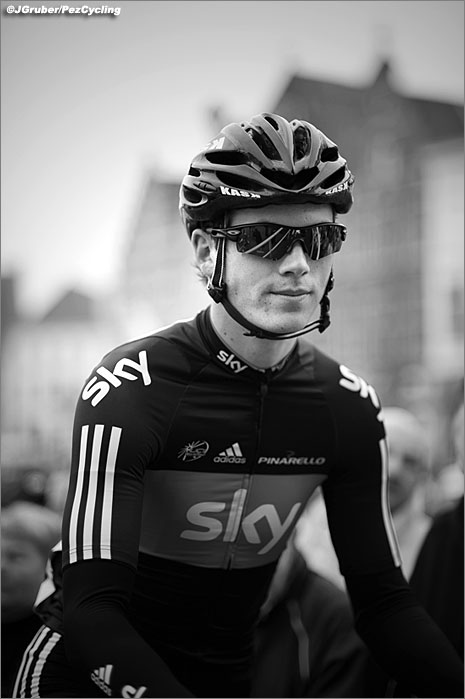 Ben Swift did his best stern professional face. Not that that’s a bad thing, mind you. Considering all the cameras out there at the stage start this morning, it’s a wonder there isn’t some rider who just loses it after the four hundred and eight eight thousandth picture is taken of them. 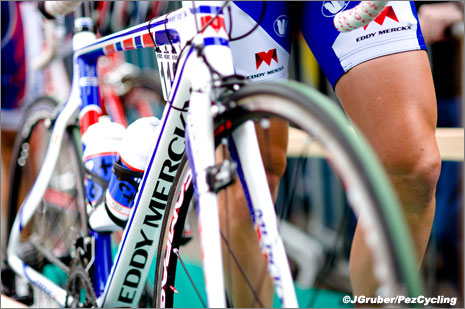 Quick-Step arrived soon after, though I’m starting to lie a bit here. It’s more of a chaotic everyone rolls up randomly, sometimes accompanied by teammates, other times not, but for the sake of some kind of order, I’m just going to lump the Quick-Steppers together. 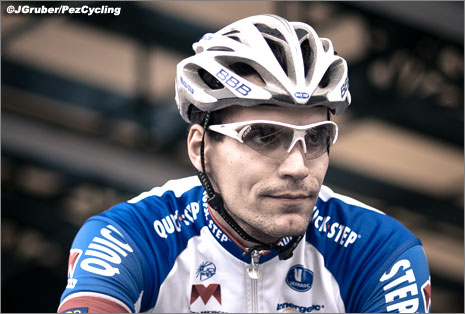 Patrick Lefevere’s boys are without their superstar leader, Tom Boonen, for the Three Days of De Panne, but they do have some significant firepower in, first off, Gert Steegmans. Steegmans has had a hard go of it over the past few years, but his recent win at the Nokere Koerse and some overall excellent rides so far this year have proved that the big Belgian is at home and performs best where he got his start: Quick-Step. 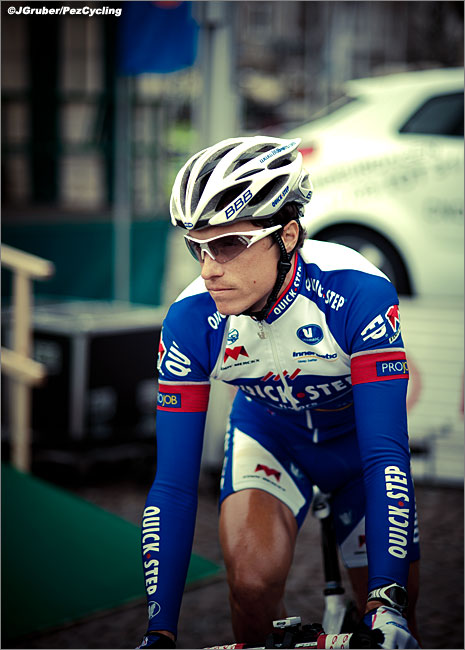 Next up, was a very unhappy looking Sylvain Chavanel. Last year’s double Tour de France stage winner didn’t look too happy to be awake, but hey, I know I don’t look that happy at work everyday either. 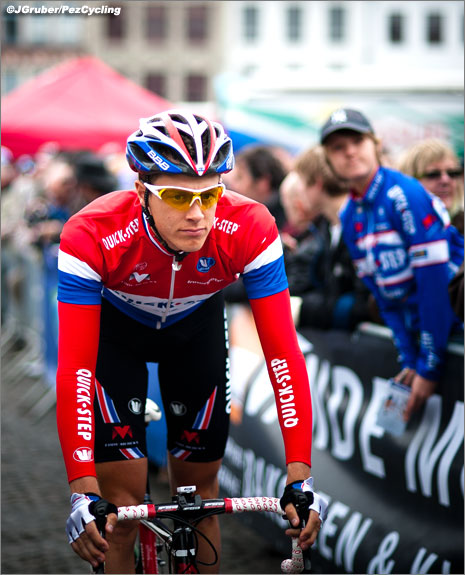 2011 Quick-Step signee, Dutch champion Niki Terpstra, got a warm wave of applause from the Belgian crowd. Terpstra has been solid so far this season, but like everyone else in Saturday’s E3 Prijs Vlaanderen, he found himself about seventeen steps behind Mr. Fabian Cancellara. The big question is now: can the likes of Boonen, Terpstra, Chavanel, and Steegmans do anything to stop the King? 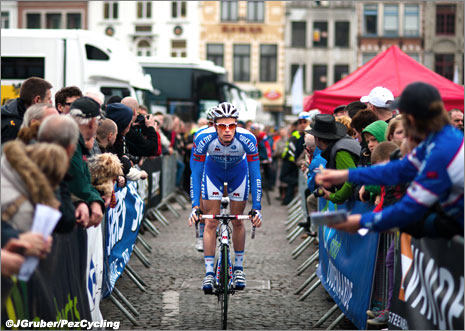 Embattled Belgian, Iljo Keisse, led the rest of the blue and white team to the sign in area. Keisse’s future is still in limbo stemming from his positive tests for cathine and HCT at the 2008 Gent Six Days. It’s a mess, but he’s currently allowed to race…if only within Belgian borders. 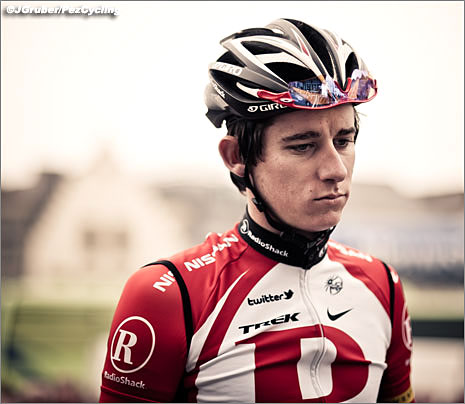 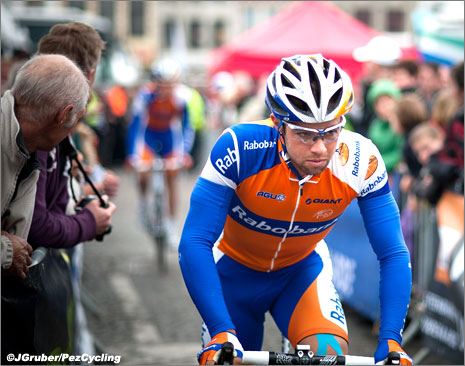 After the business-like faces of Quick-Step passed, it was the turn for some sad looking young guns to look all emo and sad. Recent Three Days of West Flanders prologue and overall winner Jesse Sergent and reigning U23 World Road Champion Michael Matthews performed admirably well. 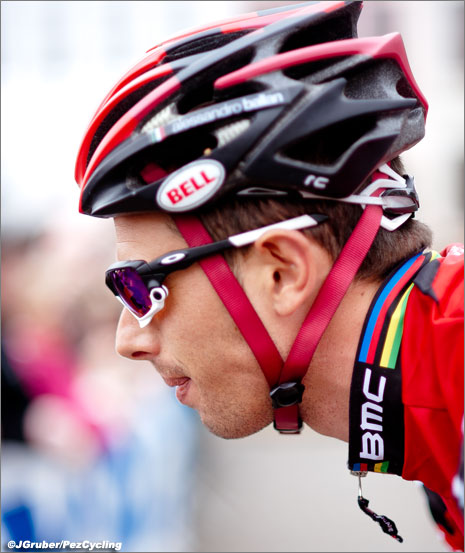 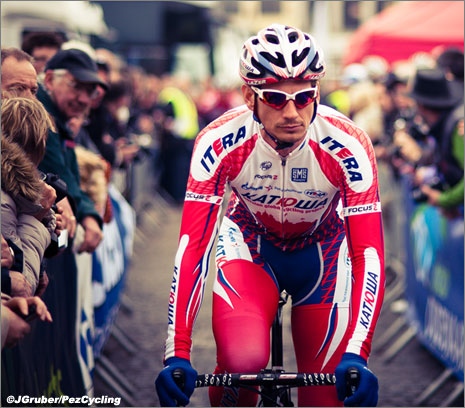 Two Italian classics stars followed after the young sadness. Filippo Pozzato got a generous cheer from the crowd, but if my ears heard correctly, there was a bit more of a raucous thundering for the former World and Flanders champion, Alessandro Ballan. It has been good to see both of the stars back to the top of the sport following off years in 2010. 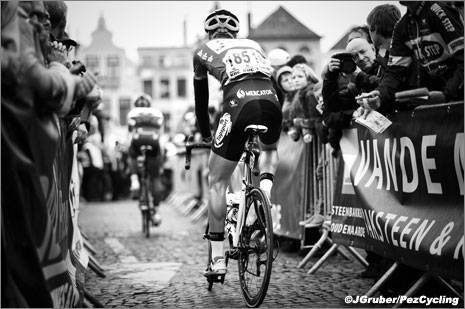 Cycling in Belgium really is a big deal. Thinking back to the start of today’s stage a few hours ago, one thing stands out in my head: Oudenaarde’s Markt was packed. Remember, it’s Wednesday. It felt like a holiday though, and there’s no better place to be than a country that celebrates cycling holidays. Bless this country. 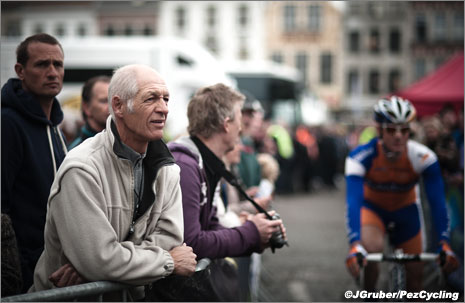 HTC-Highroad held down the spots as last to sign in for today’s stage. Matt Brammeier was still one of the early signers considering Alex Rasmussen’s likely post stage start sign in. The announcer reported that the track star was having some difficulties with a mechanical. Oh the drama. 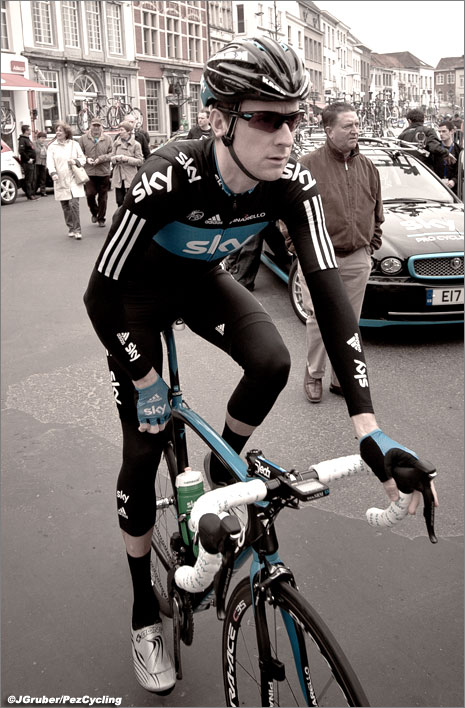 After milling about at the sign in area for a good long while, I began to realize that the race must be starting soon, as everyone had disappeared. The previously packed barriers were suddenly empty. I would have asked Bradley Wiggins for directions, but he already looks like he’s focusing on tomorrow afternoon’s time trial. 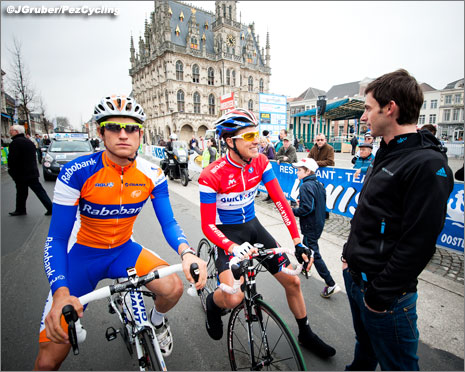 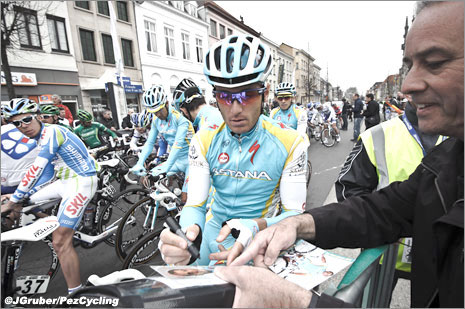 From what I can tell, autographs are a vital part of any Belgian pre-race festivity. There were dozens of fans looking for autographs, and not just with a blank piece of paper, but a specific rider’s postcard. There was a distinct plan behind their obsession, and for the most part, riders were happy to lend their ink to the fan’s fervor. 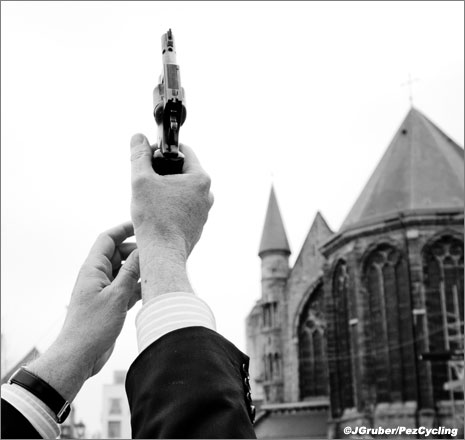 Then it was time for the start gun, which happened to pop right next to me. I didn’t even see it coming, but I certainly heard it. I looked up, and there was the smoking gun. Unfortunately, there’s no smoke in the picture. 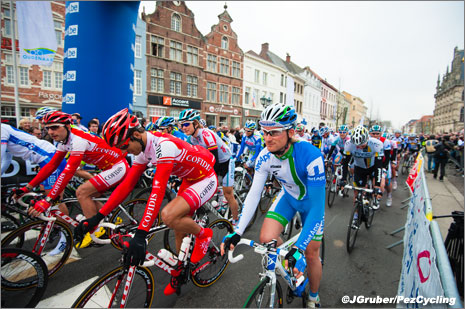 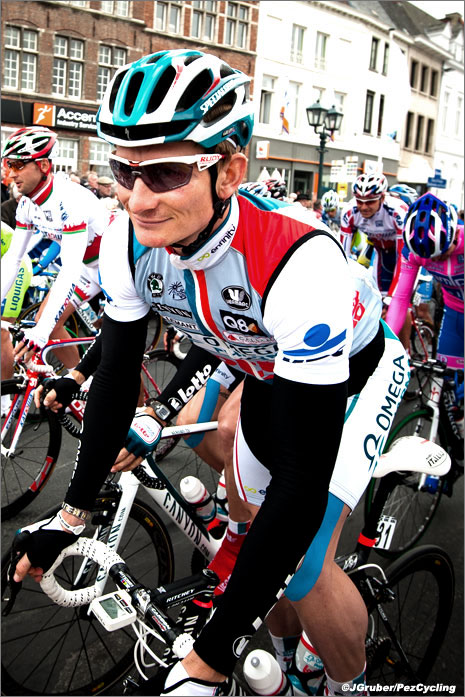 Stage 1 winner, Andre Greipel sets off for his day in the leader’s jersey. Unfortunately, he wouldn’t have it at the end of the day. 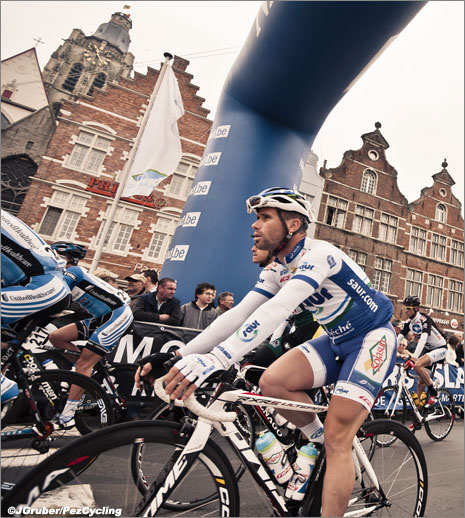 I couldn’t help but give a little nod of respect to Jimmy Casper. Today’s stage took in the Kemmelberg, the site of his horrific crash only a few years ago. As a bike racer, it’s his job to race, but it still must be a bit unnerving to return to the scene… 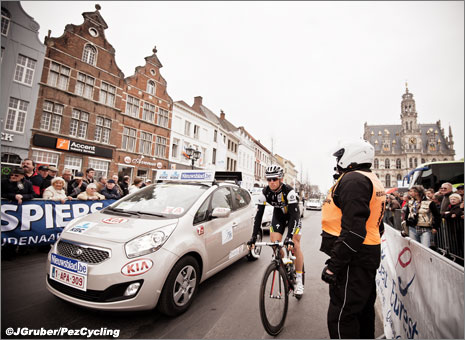 Ace leadout man, Mark Renshaw, followed almost a full minute behind the field, but he didn’t look too concerned. 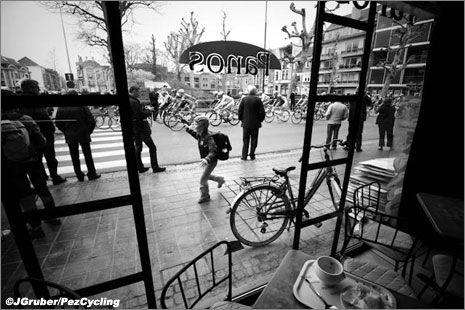 After all of the bike racing fun, we headed straight for a bakery. Matt Conn told me there was one thing and one thing only that I needed to eat while in Belgium: rice tarts. He made some other recommendations, but all I really noticed were the rice tarts. I took his mandate to heart and set about trying to eat my body weight in glorious rice tarts. While preparing to take on the nervous task of ordering in a language you do not know, the bike race came back to visit us. You can’t get away from the damn things in Belgium. 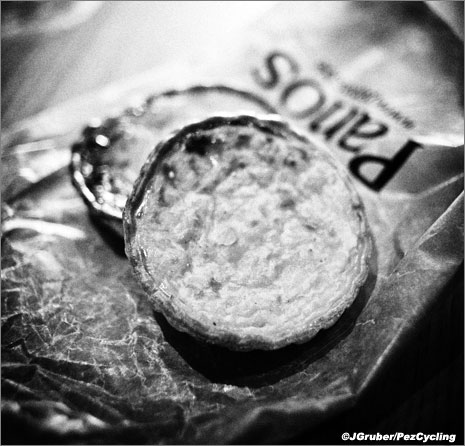 After the hubbub had died down, it was time to get busy with the rice tarts.

That’s all I have to say.

We’ll be covering anything and everything Flanders and Roubaix over the next couple of weeks, so stay tuned!

Questions? Comments? Email me! Want to see more pictures? Head to Flickr. Want to enjoy the play by play here in Belgium? Try Twitter. If you’re looking for a bit more, there’s always the tried and true, JeredGruber.com