How can a 28 kilometer ride from Bolzano to Settequerce last two hours, include no historic climbs or other noteworthy attractions and still be considered a Pez Top Ride? Answer: when your 13 year old daughter rides a “real bike” for the first time. 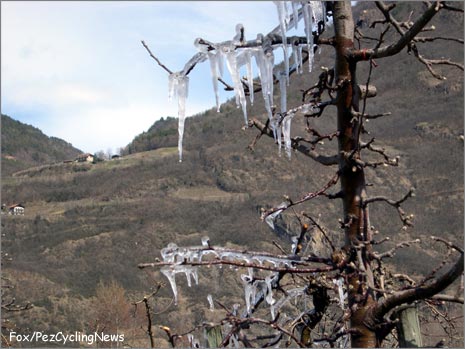 A Funny Inheritance
Most fathers dream of their children following their hobbies and achieving excellence. Many athletes owe their success to overly ambitious fathers. However, I’m not the type and I’ve had to accept that my kids aren’t interested in cycling, despite years of petty persuasion (or maybe because of it). So I gave up. Recently, my daughter asked if I’d take her riding with me. Amazing. Once again confirming the Inevitable Irony of Being: as soon as one no longer desires a certain thing, it is given to them.

OK, we were in a rush and forgot the helmet… good thing her mother doesn’t read sites like this!

Mr. Cheap-Oh Goes Shopping
As someone who has written a couple of articles about being Cheap, I was certainly not about to betray these qualities when buying a bike for my daughter. The Ideal First Rig should definitely be used, yet in excellent condition, and preferably in steel, so she could wreck it without worries. Also, down tube shifters would be very educational, like learning to drive a car with a manual transmission. After a little searching, I found a classic Moser with a complete Shimano 105 gruppo and Ambrosio rims, everything in minty condition. With 300 euros, new tubes and tires and some cleaning and lubricating, we are ready to ride.

The Rush of Liberty
After explaining a few basics about shifting, she takes off, instinctively going into the drops. I catch up and see that we are going over 30km/h. She smiles. While city bikes, cross and mountain bikes all have noteworthy qualities, they all lack the lithe elegance and speed of a road bike. The first time one experiences this purposefulness, it remains embedded in the psyche. We all remember the first taste of velocity. This ride on March 31st marked it for my daughter.

I philosophize that the rush and speed are just two parts of Cycling Liberty. The third is distance. As a 10 year old, I ventured far, far from home. Feeling complete freedom. How far she asks? I don’t know, 20 or 30 kilometers. Her eyes open wide because she knows the heavily trafficked roads of the States. What did Grandma say? Geez, I would never had told her where I was going, she’d have taken my bike away. My daughter nods; Dad wasn’t always so straight [note to self: keep the Getting Arrested Story in the closet a bit longer].

Populist Forgiveness
We are riding on single lane, access roads through the famed apple orchards of South Tyrol. It’s quiet. The branches are leafless, yet are already populated by little green buds. The first traces of Spring provide a ripe metaphorical setting for this article. I fall behind my daughter’s Purple Power Machine (as we’ve started calling it) and watch. Proud Father Moment. She looks good. Her long legs turn quickly and easily. A classy 52 X 42 n’ all. A nice round pedalata, as they say in Italian.

Now I remember another great thing about cycling: it is a forgiving sport. My daughter is not the most athletic in her class (she failed gym, but that’s another issue). While she struggles with most sports, she looks great on the bike (and pretty good in the pool for the same reasons). While rapidity or dexterity is a bonus, it is not the exclusive domain of cycling. Her smooth, agile strokes, steady persistence and desire are just as welcome. And don’t underestimate the bonus of coasting. In an average 5 hour race, the professional cyclist coasts about an hour. Yes, cycling can be a most accommodating activity.

The Slide and Grace
On we ride and our pace is fine. The air is cool and pleasant. After a few kilometers, we no longer need our jackets. We are practicing drafting. Some traffic up ahead…
Brake
Brake
BRAKE!

She brakes too late and slams into my leg with her size 50, steel steed that weighs twice as much as mine. YEOW, that smarts! Enough pace line lessons for today!

As the kilometers build, the rest breaks become more frequent. Muscles she doesn’t use that much are starting to protest. Our (once) healthy average speed is eroding. We go back to drafting, yet at speeds this low, its effects are negligible. Though I don’t mention it, she is now earning a valuable Initiation in Bonking; where the human gas tank is almost spent, the silky strokes are erratic and labored.

However, we survive, inspired by making it to our favorite gelateria. She gets a scoop of nocciola (hazelnut) and one of Nutella. I get limone. I read out some of the finer points from the cycling computer and we conclude that 28 kilometers is a pretty good first ride. And if we take away those last few ones, our average speed would be closer to 20 km/h (instead of 17). OK, we can be proud of the effort. And she learns another valuable lesson: like fishermen, cyclists optimistically average up.

They make a fine gelato even in Tyrol.

The Origins of Joy
March has given way to June, and I’ve been sitting on this story long enough that it’s now an apt Father’s Day piece. In the meantime, we’ve been on other rides and progress has been made. The other day, my daughter caught me staring at a bottle of catsup. So I let her in on something that I had never revealed to anyone (and now that it’s out, I might as well publish it). When I was young, one of my secret delights was room temperature catsup. The first serving from a new bottle was such a joyous rite because afterwards it would have to go in the fridge. Chilled and its chilly-ness infecting and dulling everything it touched. Warm catsup is what made restaurants so appealing, as well as a respite from Mom’s “cooking”.

Even though I still prefer temperate catsup, I no longer have such powerful feelings for condiments (and store mine in the fridge without remorse). When Concepts like Death and Taxes seem so imperative, it is little wonder that youthful passions fade. Then one day, your kids catch you gazing at a bottle of catsup and wearing a dumb smile. The redeeming part is that they understand.

Introducing my daughter to cycling made me realize that while I’ve lost many youthful interests along the path to middle age, one exception is riding. For all of the wonderful reasons to ride a bike, my motivation is primarily to stay in touch with the person that could hardly wait to open the next bottle of catsup. I’d guess that many readers feel the same.