As a dedicated follower of the Spring Classics, each December every effort is made to wade through the constant deluge of meaningless newsflashes to find something, however minute it may be, to catch my attention. Pure speculation does not make for worthwhile reading. Fortunately, amidst the mind-numbing reality of facing a cold New York winter, I didn’t have to search far for something to grasp onto.

While the heavy rain slashed against my window for a second consecutive day, I received an email from my friend at the Belgian newspaper Het Nieuwsblad with details on the 2010 Tour of Flanders and Omloop Het Nieuwsblad (formerly and still known to me as Het Volk). The course map looked like a first graders art project-complete with numbered and colored triangles. I spent a few minutes staring at the scribble, before the intricacies of the courses rose from the page. For me, the Tour of Flanders is the most beautiful of the Classics. It is the most celebrated of all the Flemish festivals, and no other event creates such an atmosphere, such a popular fervor. Flemish riders say to win, you need heart. If you feel Flanders in your blood, you feel the pain less in your legs. 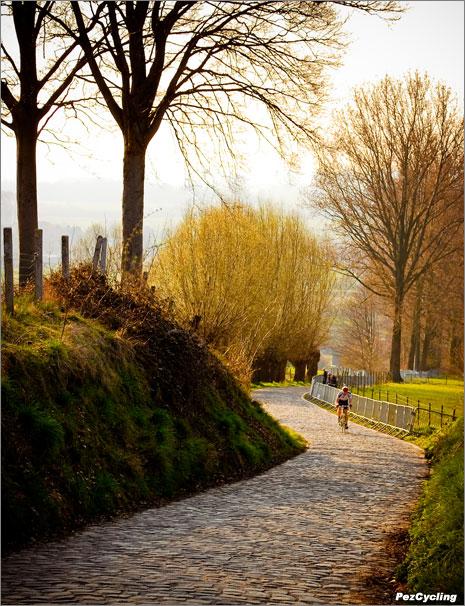 Thankfully, the Koppenberg is back, forming the heart of one of the most amazing sections of bike racing on the planet.

Every year, while I expect the inclusion of the Koppenberg and the Muur van Geraardsbergen, my excitement is actually muted by this expectation. It is the secrets that lay in the fields, draped across the hillsides, and hidden in village corners that I am connected to, and the decidedly unexpected that makes for excitement. The 94th Tour of Flanders is 255 kilometers and includes 15 climbs, 9 of which are cobbled and an additional 13.6 kilometers of kasseien- Flemish for cobbles. In 2009, the race was 260.7 kilometers and included 16 climbs (9 cobbled) and covered 21.6 kilometers of cobbles. Sure, less pave is disappointing, but unlike Roubaix, Flanders is not won on the pave, victory comes on the hills, and the ability to conquer them in rapid succession. 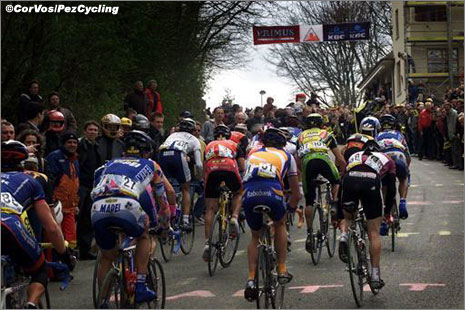 The Kluisberg is back on the route and ready to soften legs.

This year the race action begins after the Dorp van De Ronde in Desselgem, the ceremonial village of the race that is awarded to a different village each year. First comes the 1800 meter cobbles of Huisepontweg, and the climb of the Den Ast, before heading to Zingem, and then towards Oudenaarde. But this is where the race takes a different twist. Instead of its usual route to the Molenberg, which is sometimes preceded by the Lippenhoevenstraat, Paddestraat and Kerkgate cobbles and then the Wolvenberg, this year’s route skips this processional and heads far to the southwest across the 2000 meter Varentstraat cobbles to the edge of Flanders and Wallonia and the Kluisberg and Knokteberg climbs.

It then reconnects to the familiar route from the Oude Kwaremont to the Eikenberg. This includes the Paterberg, Koppenberg, Mariaborrestraat, Steenbeekdries and Taaienberg, and is as beautiful a stretch of road as exists in bike racing. 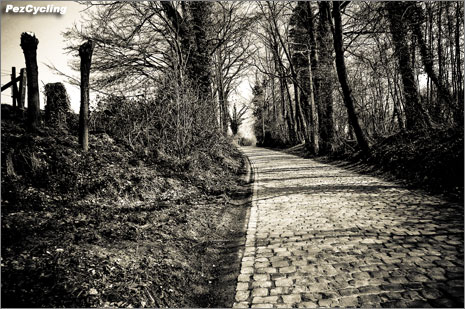 The Taaienberg was a skirmish site for the Pozzato-Boonen duel in 2009.

Traditionally, the race will next climb the Boigneberg or Varentberg, before the Haeghoek cobbles, which leads to the Leberg. Sometimes the Steenberg and Foreest climbs are included here, but not since 2005. Instead, following the Eikenberg, the race will head onto the Holleweg cobbles (which is typically ridden at the end of the Kerkgate cobbles, which typically comes after the Molenberg and before the Wolvenberg- got all that?) 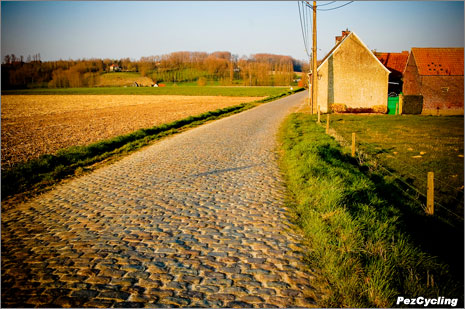 From here, the race will follow the narrow undulating roads that criss cross the Flemish Ardennes, where the riders will cover the first half of the Kerkgate cobbles in the slightly uphill direction to the village of Mater, before heading to the Molenberg.

The Molenberg traditionally causes a panic in the peloton. The sharp turn to enter the narrow cobble track benefits those who get there first, and penalizes those who don’t. At this point in the race-208 kilometers- it will be even more important to stay at the front, and any correction that is made over the Molenberg may cause a permanent split. At the top of the Molenberg, the race goes right instead of left, twists and climbs past Peter Van Petegem’s house, and enters the Haeghoek cobbles. This is the same approach as the Middelkerke-Zottegem stage of the 3 Days of De Panne. 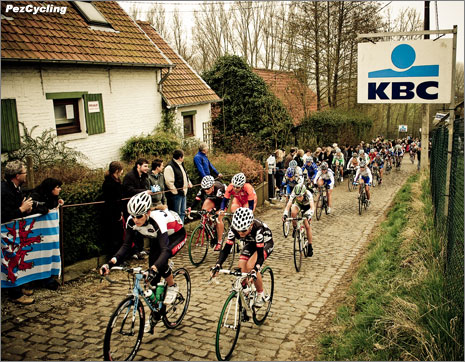 The Molenberg will move from an interesting appetizer to a full-on meal with its move to the heart of the race.

The village of Brakel is the fourth in a series of important centers that links the race, following Bruges, Desselgem and Oudenaarde, and preceding Geraardsbergen. The Valkenberg was reintroduced in 2005 after an eight year hiatus, sandwiched between the Berendries/Tenbosse duo, which has been paired since 1997. 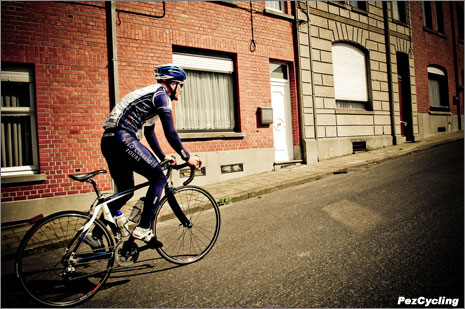 There paved climbs in the lead-up to the Muur could be pushed forward in their importance in 2010.

This year, the course will bypass the Valkenberg and the Eikenmolen, which has played into the strengths of Stijn Devolder each of the past two years. This has been replaced with the traditional route through Parike on the way to Geraardsbergen and the Muur, the Bosberg and the final 10 kilometers to Meerbeke. 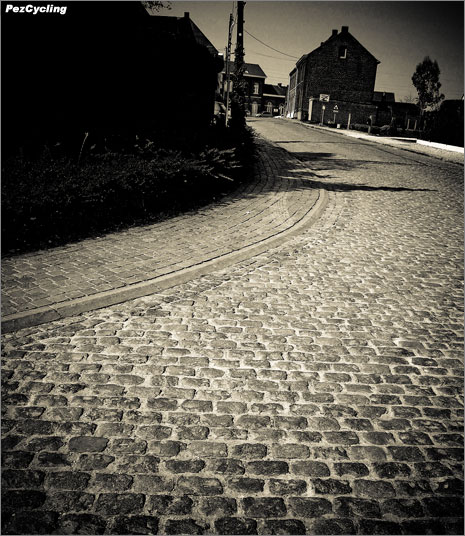 The seemingly neverending cobbles of the Oude Kwaremont.

So what does all this mean? The inclusion of the Kluisberg and Knokteberg before the Oude Kwaremont will loosen the legs before the succession of cobbled climbs. The twist after the Eikenberg is interesting, as it places more significance on the Molenberg, and a faster execution across the Holleweg/Kerkgate cobbles. A flat or mechanical on either of these two sections and it could be too difficult to reconnect. The other major change is the exclusion of the Valkenberg and the Eikenmolen. The combination of climbs provides just the right amount of tricky terrain to keep the pace high and the race interesting. 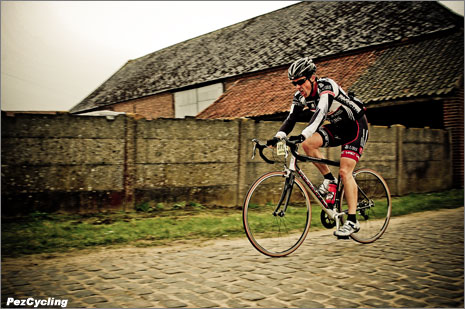 The flat cobbles of the Holleweg/Kerkgate will become more than a processional in 2010.

Too many climbs and the middle ones are neutralized. Too few, and the race isn’t hard enough for the top riders to show their strength and force a selection. The finale now places more weight on the Tenbosse, the scene of Johan Museeuw’s blistering attack in 1998. By eliminating the Eikenmolen it places more attention on the race’s centerpiece, the Muur. 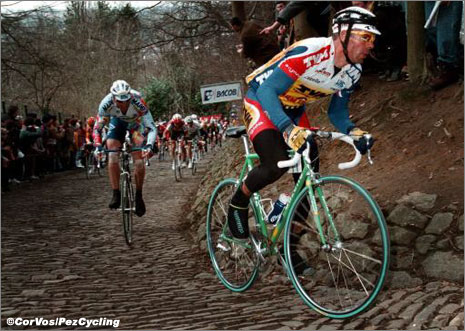 My guess is we will see a dozen riders enter Geraardsbergen together, and half that will regroup by the Bosberg. Perhaps an attack on the run in to Meerbeke, ala Tafi in 2002 or Boonen in 2005, or we may be treated to a 3-up sprint, like 1999 with Museeuw, Van Petegem and Vandenbroucke. 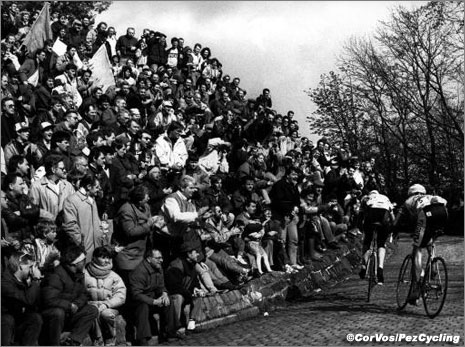 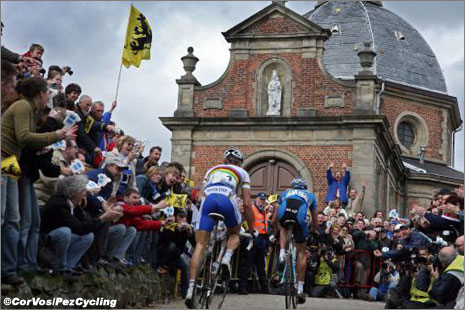 Thinking about the noise that builds in the village of Geraardsbergen, the crazed excitement of the fans as the first riders appear and the ensuing cheers for any Belgian rider, all helps to motivate me through the following months. As for the promoter’s intention, and the possibilities that it presents, for me, this is speculation well worth thinking about. Next up, Omloop Het Nieuwsblad. 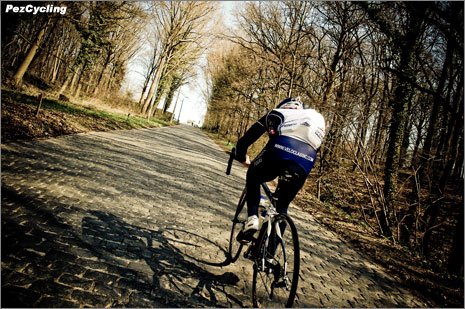 What will the race like as it hits its perennial final climb, the Bosberg?

Peter Easton has attended the Spring Classics every year since 2003. Catch up with him on the road with Velo Classic Tours and one of his ten itineraries to the Classics. Visit VeloClassic.com for more information.
Like PEZ? Why not subscribe to our weekly newsletter to receive updates and reminders on what's cool in road cycling?