While much of the western world celebrates love and romance on Valentine’s Day, thousands of us also recall the tragic death of Marco Pantani in 2004, who died alone & by his own hand (and the drugs in it) in a motel room in Italy. As our humble remembrance to the most exciting climber of modern cycling, we present Ale’s photo-essay of Pantani’s career, covering the years 1995 – 2004.

February 14, 2004. Cycling lost one of its greatest and most exciting riders, and no one else since has dared create a persona like the swashbuckling ‘il Pirata’. Nor could they.

Pez’s Ale Federico followed Pantani though his rise, fall, rebirth and ultimate demise, making many trips to glimpse only a few seconds of Marco on the roadsides of Le Tour & Il Giro from 1995 until the end. Along the way Ale’s life transformed as well… a lot can happen in 10 years. 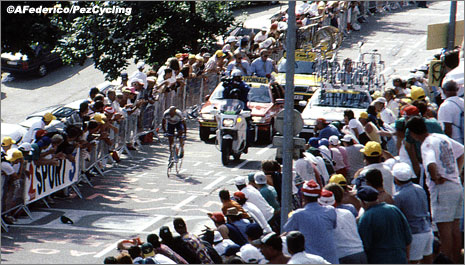 The first stage win at the Tour de France. Marco Pantani from Cesenatico wins on the climber’s heaven. The Pirate’s story starts. It was me and my brother going together to “le Tour” and I remember it as a great day. We were young and it was our first long trip alone with the car. We came back the same day and we arrived at home in early morning time. We never came back to that day in words but I feel it was great for both. 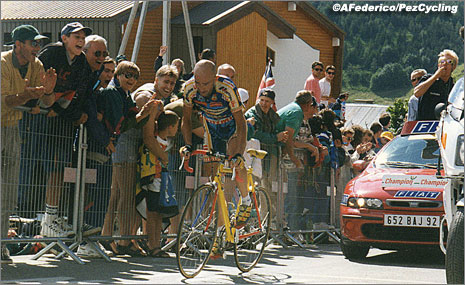 Two years later, after a main injury to his left leg, Pantani wins again on the Alpe d’Huez. This time I was with my brother and my cousin. I was the older and I was feeling responsible for both. They were not interested too much in cycling but it was for them a good chance to leave families. I still miss them nowadays when I chase races. Massimo, Giorgio… where are you? 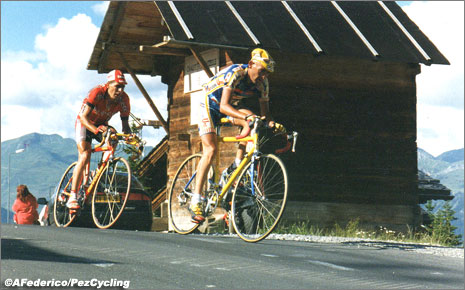 A difficult day for Pantani after his beautiful win on l’Alpe d’Huez. Virenque attacks on La Madeleine and Pantani suffers in a long pursuit. For us it was a long and hard transfer evening. We picked up a girl on the way to Courchevel and she was very pretty. Everybody was very excited and we were trying to show how good we were. Ahh, the good times… 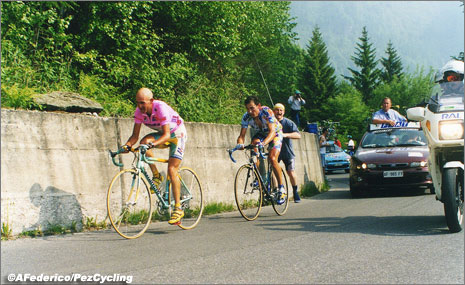 Pantani against Tonkov, Tonkov against Pantani. It’s one of the most cruel duels of the modern cycling era. I was alone that day and it was very warm one. June. Probably one day close to my birthday. I was there to watch my idol Pantani in rosa jersey and I was excited as never before. 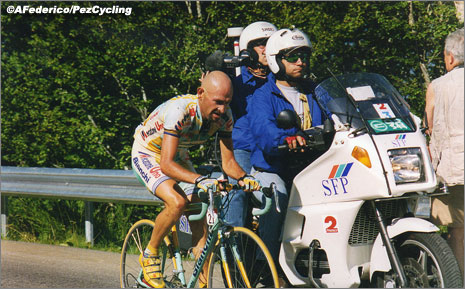 He wins on the Pyrenees. Ullrich’s first place in GC is not so far away. It’s a hot day when Pantani starts to think the yellow jersey is in reach. My first trip by motorcycle. From Italy to the Pyrenees on two wheels. An entire winter just to earn money to buy it. To learn something about driving. Then, the decision – leaving home and towards the Pyrenees, alone. 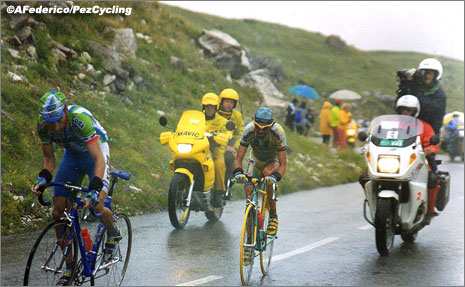 Four kilometres to the top; it rains. Pantani attacks and overcomes Escartin. The flight begins…I was wet. More than wet. It was me and my poor tent. And my moto. Waiting hours and hours behind the rain. But was great to be there and, today, I feel the warmth of those memories. 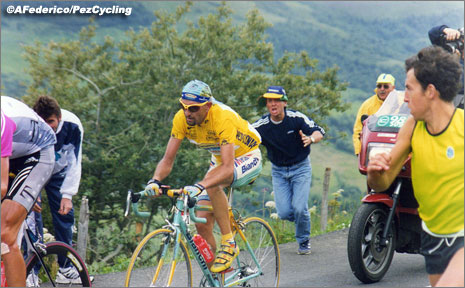 A solid yellow on the Madeleine. The way to Paris is free. My trip was finishing that evening. I came back passing through a very long tunnel into the Alps. The way to home was sweet. Was long. I remember the last kilometres were never leaving. I was coming back from my first big Tour chase. 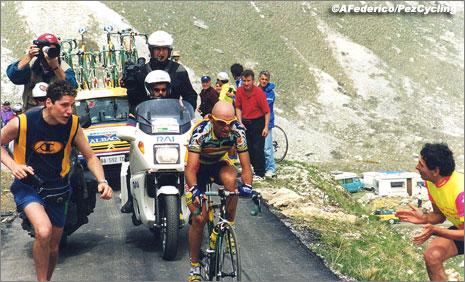 It’s one of the longest climbs of the Giro 1999 [22kms]. Pantani against everybody else. Just after the Sanctuary, Pantani leaves all the other against the road. He flies, he flies above. Again me and my moto. Another long adventure chasing the Giro. It was too simple those days. Pantani was winning all mountain stages and this was so cool. 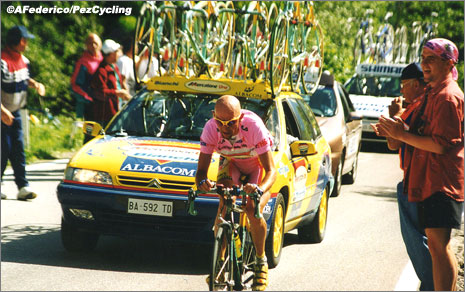 Yes, I know. It’s few hours before that 5 June 1999. Look at this picture. Pantani is alone, in Rosa jersey. It’s the last day of the idol of many. The end of the first part. The story is going to change. Last day of the glorious story. Lives sometime change in a night. 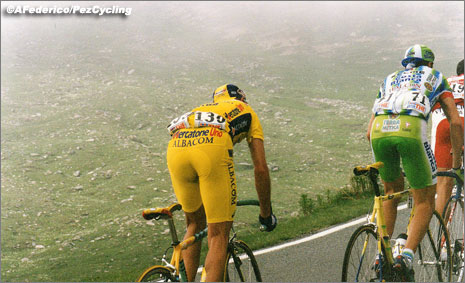 During the Giro 2000 Pantani was always in the last rows of the group, especially during mountain stages. But that day, on the Colle dell’Agnello, he didn’t gave up. He forced his unprepared body to follow the firsts. On the way to Briancon he discovered to be, again, the Pirate. And year later or hundred later? Everything was changed in cycling and I was going to graduate few days later. But I couldn’t miss at least one Giro stage. I couldn’t! 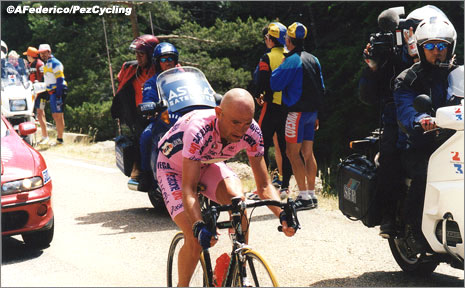 Pantani lost that Tour on Hautacam. But on the Ventoux he came back. In this picture he’s tightening his teeth behind the group of the leaders. I went the Ventoux by car, with my new bike which was a present from my mother for the recent graduation. It was another Tour de France, and my life was changing, no more reference points at university and long days wondering about the future. 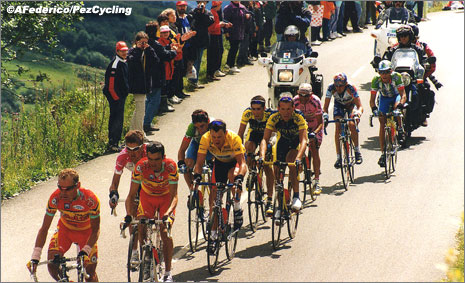 Le Tour has got his new leader: Lance. But Pantani studies at his wheel, he knows, the yellow jersey can be attacked. He does that on the climb to Courchevel and wins the stage. Probably last stage of my youth. I left the Tour that evening conscious I was going to leave home for a year in the army. I didn’t know that time, my entire life was changing… soon. This was in fact my last stage chasing as a “boy”. A few months later I entered in the navy moving to the Adriatic side of Italy, finding there work and choosing traveling as way of life. One year later I went to Korea and I met my wife Natalia. 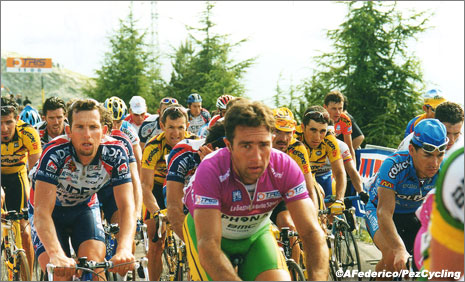 Confused into the grupetto between ignored cyclists, Pantani won’t complete the Giro 2002. Almost married, with a baby the life can change so fast. I was surprised how things come and leave. The cycling was everything few months before and now, I was barely interested with it. 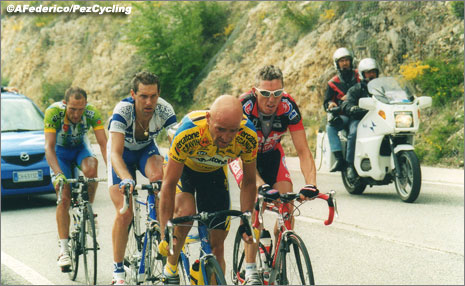 His last Grand Tour. We are at the Giro 2003. The first climb. Pantani is late and tries to lose less minutes as possible. The tale of the Pirate is going to finish, but his tifosi will remember him forever. And I will remember forever this story I wrote. The story everybody has looking few years back. Cycling it’s my best friend because cycling has been all this time with me. Even my wife, even my daughter, they can’t know about me what cycling can. That lives can change in a night.