PEZ Roadside: There is a distinct calm that defines the Sunday morning of every major Spring Classic. For the locals, cycling fans and the media, the air is filled with a relaxed anticipation for what has yet to unfold. For the organizers, the teams and the riders, there is the palpable tension that comes with the nerves that a day of such magnitude in our sport brings. 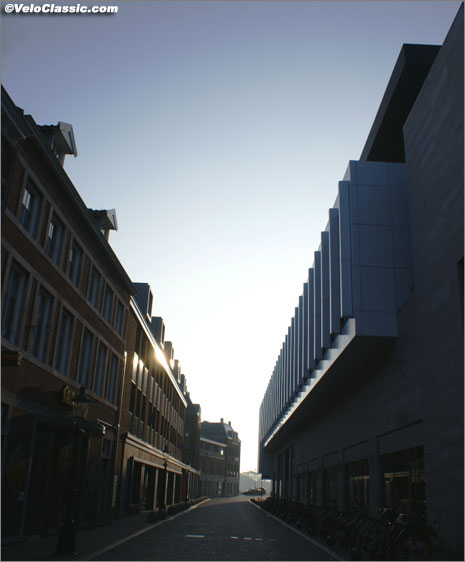 Before the crowds, a quiet moment at kilometer 0.

The Grote Market in Maastricht – Holland’s oldest city – has been transformed over night into center stage for Holland’s biggest bicycle race. Soon enough, the favorites will be paraded in front of the media, interviews taken, questions asked, and predictions cast. In 6.5 hours time, one man will be holding a bronze trophy, his name etched atop the winners list. 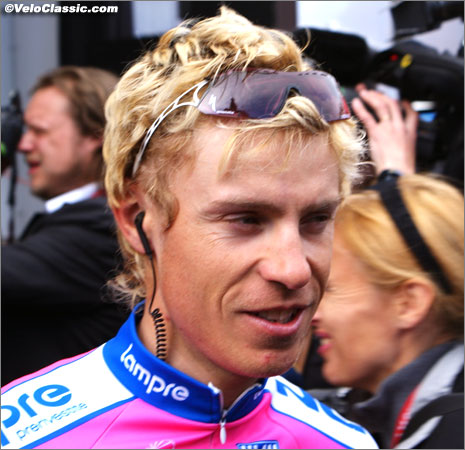 2008 winner Damiano Cunego endeared himself to the press when he was quoted as saying the Amstel Gold Race is very near to his heart.

Early Morning Commute
The calm is slowly drowned out by the buzz of this anticipation, as the crowd seeps into the square and race vehicles splashed with Amstel Gold logos hurtle towards the square, taking advantage of legalized speeding for one day. 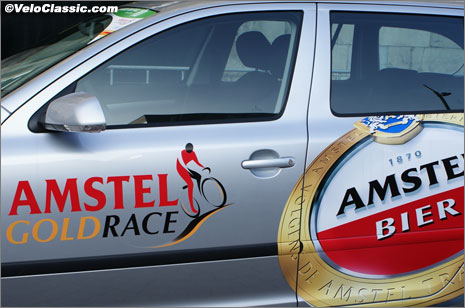 Amstel beer has been the largest sponsor of cycling in Holland since 1966.

As the buses navigate the crowds, and find their respectful parking spots, the magnetism surrounding the Rabobank bus is not surprising. I don’t speak Dutch, or look good in orange, so I steer clear of the scrum. 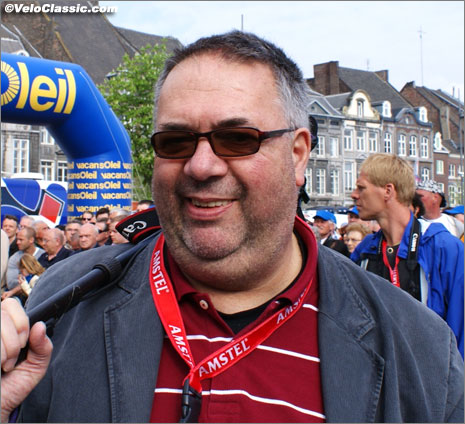 Legendary Dutch photographer Cor Vos was happy to pose for a photo for once.

This pre-race social hour invariably produces moments to be added to the personal highlight reel, and for me it was chatting with 1996 Amstel Gold Race winner Stefano Zanini, now a director sportif with Fuji-Servetto. Stefano smiled broadly while recounting his solo victory on the streets of Maastricht. His advice for the day? Stay alert, and stay in the front. His favorites? Cunego, Rebellin, Schleck and Gesink. 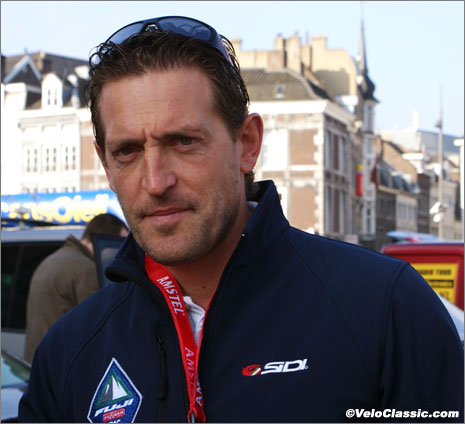 Stefano Zanini, 1996 winner. 13 years ago, the race included 70 kilometers in Belgium, and finished along the river in Maastricht.

The Dutch Dilemma
There is very little room for error with the Dutch in this race, and they’re starved for a winner since Erik Dekker outsmarted Sir Lancelot in 2001. 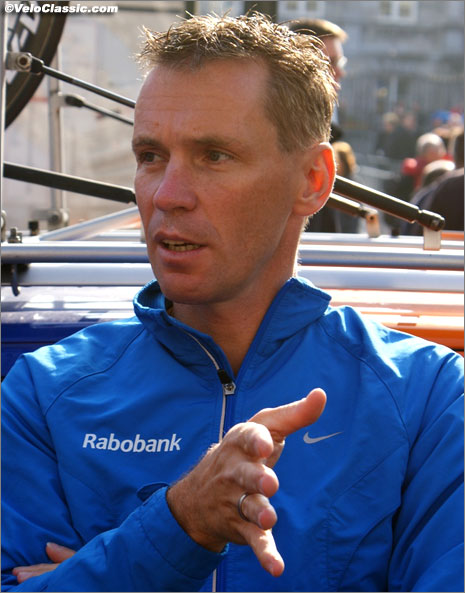 But try as they might to promote their history and success here – a glossy book on classics legend & 5-time Amstel winner Jan Raas was being promoted – the race has taken on a decidedly international flavor in recent years, and the Dutch are still left wondering when they’re going to get their invite to the post race party. 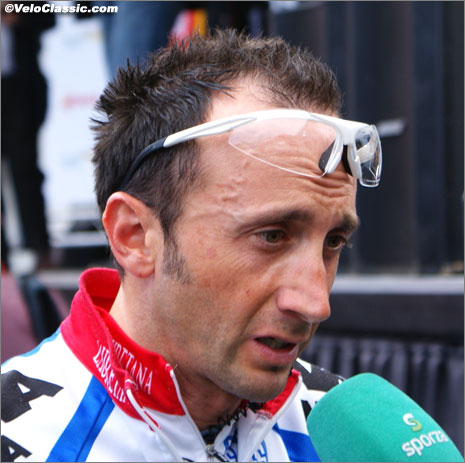 Italian Davide Rebellin was on the form of his life when he won Amstel, Fleche and Liege in 2004. 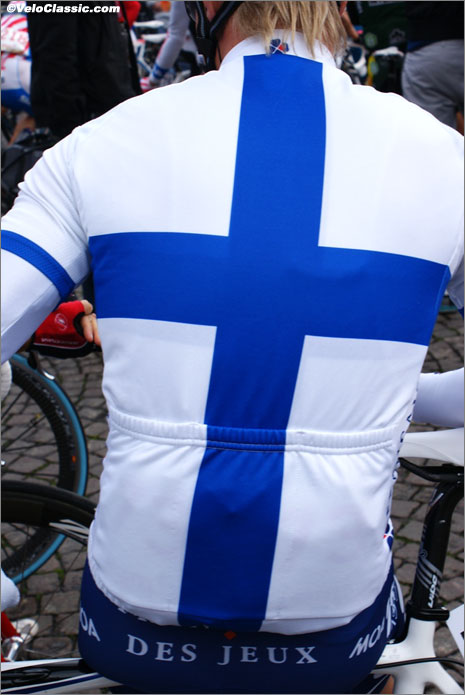 Even the Finns want a piece of Dutch appeltaart.

Rush Hour in Holland
From the Dutch viewpoint, there are two different options for seeing the race. For thousands, their pre race anticipation will play itself out continuously at the bottom of a beer glass in Valkenburg. For many others, it’s the opposite, as villages and hilltops across the landscape are dotted with crowds. Some have arrived early in camper vans, but many will hike up with a picnic lunch for a family day out. 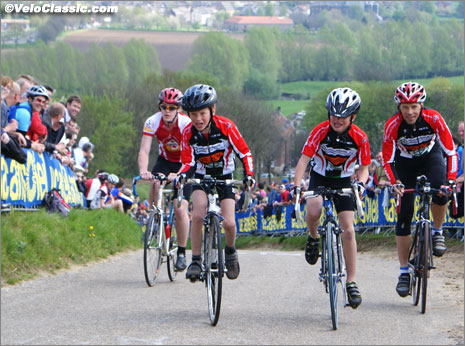 The future of Dutch cycling was out in force.

But as a New Yorker, neither of these two options was immensely appealing. I would never last past two beers, and I’m too impatient to sit in one spot all day. For me, the anticipation on race day is getting into the heart of the race, and seeing it develop. I’m not fond of New York cabbies, but on race days I always feel like I’d make a good one. For the Dutch, it’s still just a Sunday outing, so 70 kph speed limits are taken too literally, and roundabouts are still navigated with alarming nonchalance and the inopportune full stop, which sent a few things hurtling across the inside of the car. Reading a map while peeling a hard-boiled egg is definitely a form of multi-tasking, and when said egg flew out of my hands when forced to stop suddenly at a yellow light- which apparently in Holland means stop- I knew I was the odd man out on the course. 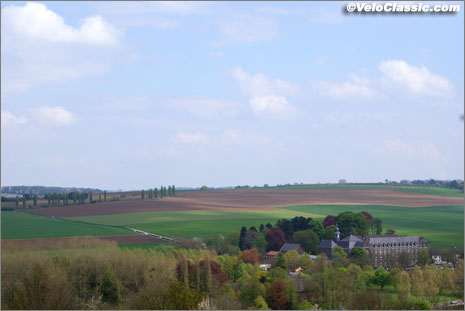 The serenity outweighs the insanity it took to get here.

In Italy, race day is pandemonium. Road signs are merely symbolic as drivers cut roundabouts short and skirt traffic islands to either side. Police motorcycles are basically a traveling fashion show, so the rule is there are no rules- just like Madison Avenue at rush hour. But strangely enough, the Dutch are not like this……at least half a dozen times police motorcycles roared up along side of me, and flapped at me to do something different than I was doing. I found that nodding, waving and accelerating seemed to work. 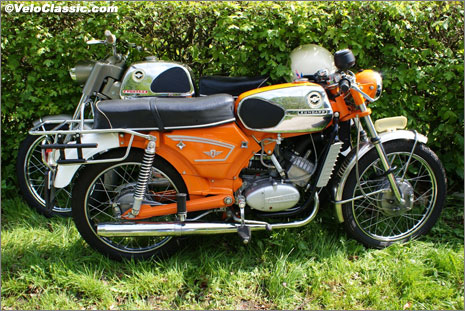 Nice to look at, but how fast can they go?

Getting Down To Business
I arrived at the first climb – the Maasberg, the only cobbled climb in the race – in time to see the break go, with the Skil-Shimano team spread across the front of the peloton. 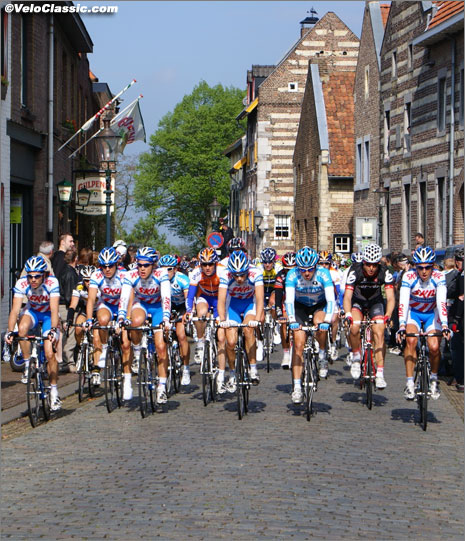 The break went on the first climb of the Maasberg, and the Skil-Shimano guys make sure it sticks.

There was a sense of joviality in the bunch as they heading up the Adsteeg. 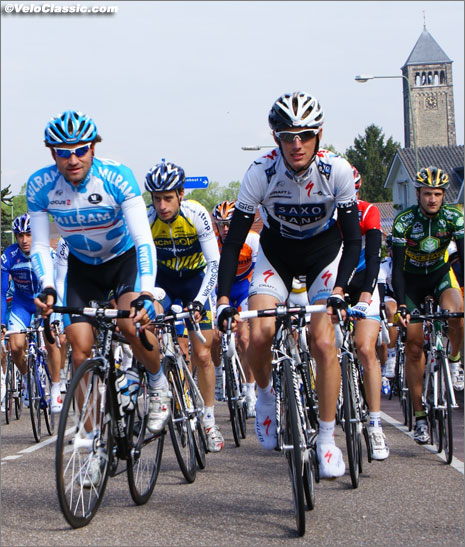 Andy Schleck seems to be enjoying himself.

The first pass on the Cauberg was workmanlike, save for the raucous cheers from the Schleck brothers fan club that lined both sides of the course at 200 meters to the finish, engulfing the Robert Gesink fan club, and forcing a National and trade team truce for the day. 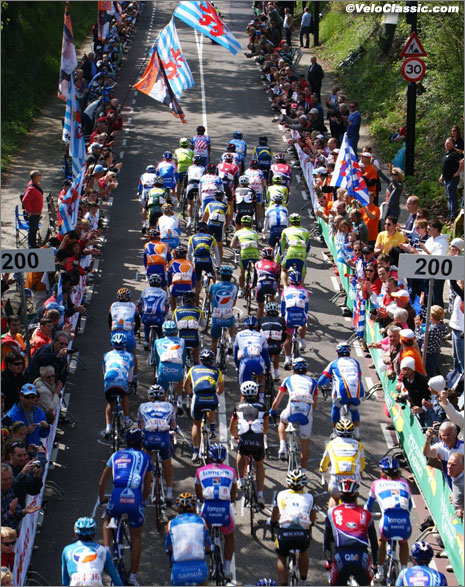 On the Cauberg for Climb 6. 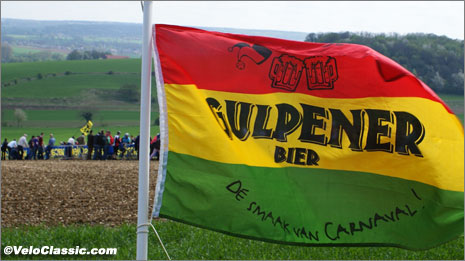 On the Gulperberg. Don’t tell the organizers they don’t drink Amstel up here.

The Gulperberg sits above the small village of Partij to the southeast, and the town of Gulpen to the north. The riders descend the Gulperberg first, before two ascents at climbs number 15 and 26. 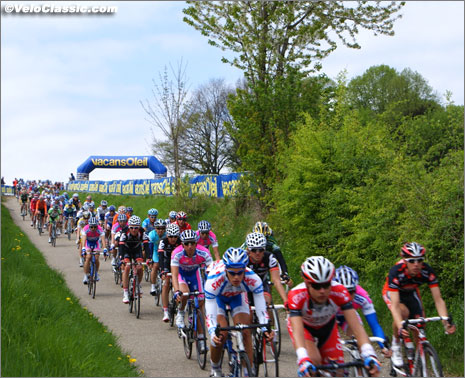 The peloton descend the Gulperberg in pursuit of the breakaway. 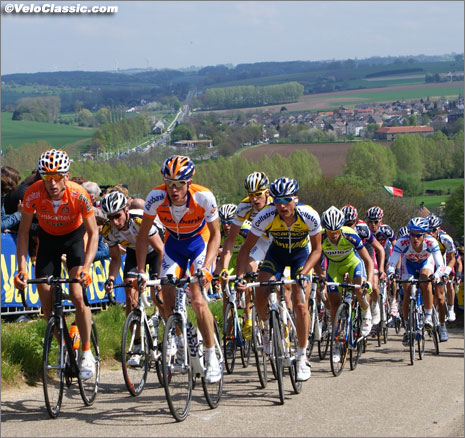 An hour later, they’re back, taking it the hard way.

The atmosphere on the climb was of a Sunday picnic. A few food stands dotted the top, and the crowd cheered a few riders on, but was mostly subdued while waiting, enjoying the spectacular view. The Geulhemmerweg is climb 22, and officially starts the last loop of the race. It was exhilarating to feel the speed of the peloton heading onto the climb, hearing the sound carbon wheels make at high speed as one downshifts. 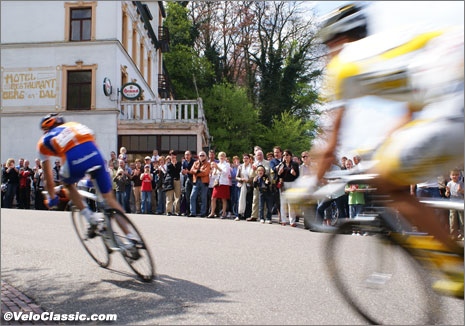 The chase is on from the base of the Geulhemmerweg.

Hitting The Wall
As I stood watching the screen in anticipation of the finish, I was distracted by a man in the crowd behind the barriers. He had obviously chosen the Valkenburg option and was amusing himself by asking me if he could borrow my access pass. I laughed, and mumbled that I was grateful for the physical barrier and glad I didn’t understand Dutch. 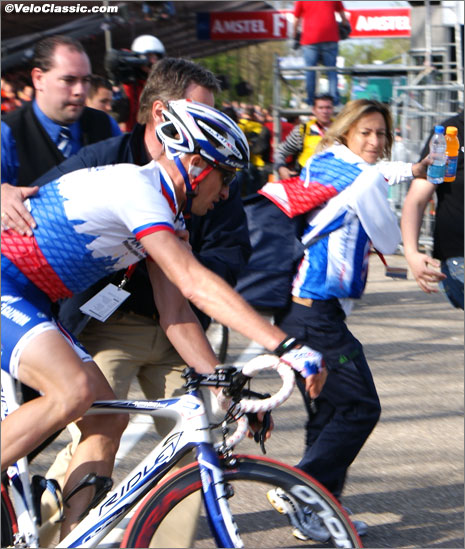 An escort for the victor.

A few minutes into the post race apocalypse, and I received a hefty smack on the back. Anticipating another usher using his authority to clear a path for the riders, I turned angrily- a New York custom when pushed- and it’s my newest Dutch friend. In intelligible English, he asked repeatedly if I’ve ever visited Volendam, famous for its clog making. Attempts to convince me I had to visit Volendam were fruitless, and he finally asked where I was from. My answer confused him for a moment. I asked him if he’d ever been to New York. He scratched his head and a serene look came across his face. Irony can hit like a brick, even when inebriated. 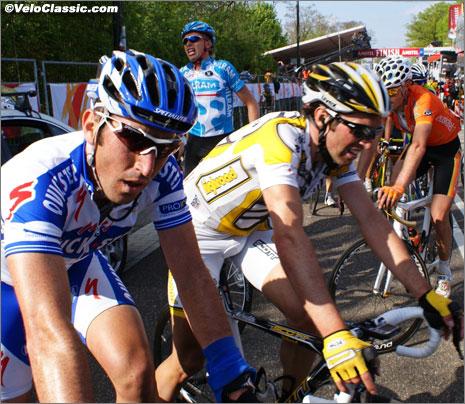 Moments after crossing the finish line, their faces tell the story. 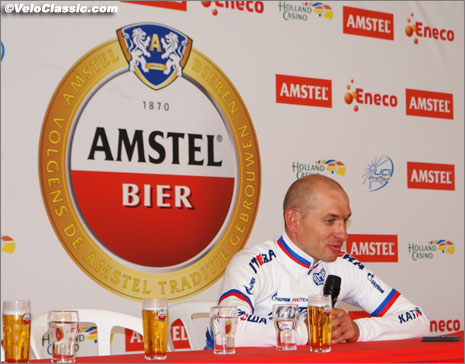 The traffic moved in slow motion into Maastricht. My New York cabbie instincts had disappeared, and I was content to, for the first time all day, take my drive at Dutch speed. As I left Holland, I was struck by a quote I read the evening before, from 78 year old Herman Krott, the founder of the Amstel Gold Race. He doesn’t hide his feelings about his creation. “The day I close my eyes, I do leave something magnificent.” 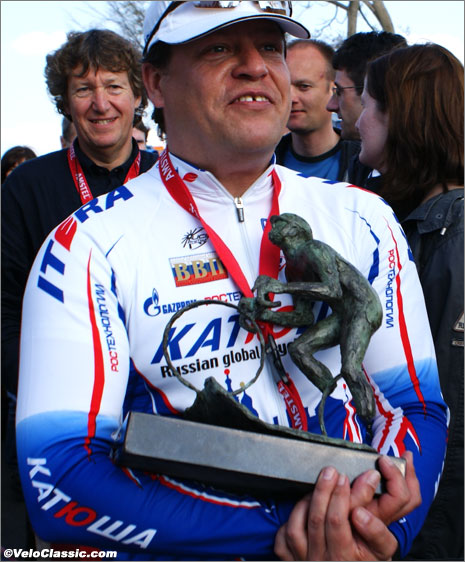 He may not have won, but at least he gets to carry the trophy.

Stay tuned to PEZ for more from the Ardennes Classics, including our look at the defining climbs of Fleche-Wallone, and Liege-Bastogne-Liege – plus the ever unpredictable roadside race chases.

Peter Easton is an expert on the Spring Classics. You can catch up with him and all the Classics on the roads of Belgium and Holland with Velo Classic Tours. www.veloclassic.com.
Like PEZ? Why not subscribe to our weekly newsletter to receive updates and reminders on what's cool in road cycling?