I must be honest and say I hadn’t really thought about the Argos-Shimano team very much until last year when John Degenkolb won five stages at La Vuelta a Espana. The team also has Marcel Kittel, but the men in white are no two horse set-up, this young team has a lot of fire power as I was about to find out at their Spanish team presentation for 2013.

The Argos-Shimano team is now part of the WorldTour and they have a training centre in the very beautiful setting of Altea Hills on the Costa Blanca, just a couple of kilometres in land from the glittering Mediterranean. The Pierre & Vacances Premium Aparthotel is one great place to have a training camp, except the big difference is that the Argos-Shimano team are based here all year and the riders can come to Altea Hills for training at any time. I knew I was in the right place when I saw Tom Veelers fluorescent green Felt in the foyer. 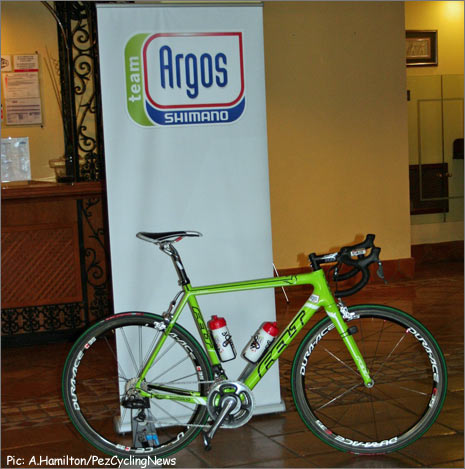 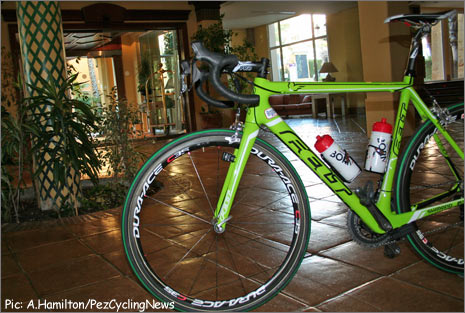 You can’t miss that Felt!

Morning started with breakfast, all the usual hotel style stuff, the orange juice was nice, but it always surprises me that it’s not made with fresh oranges as there is an abundance of them in the area. Anyway with croissants and pain au chocolat, the sausage, bacon and eggs were not even tempting. At my table were three Dutch journalists and looking round the dining room; everyone was either Dutch or Japanese which worried me, would the presentation be in these languages? 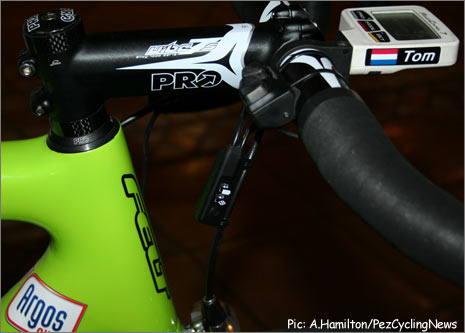 After last Tuesday with Omega Pharma – Quick-Step I had a headache due to contending with Italian, French, Flemish, English and Spanish, so Dutch and Japanese was going to make the day impossible. I’m glad to say the presenter, Carrie ten Napel (of RTV oost), did most of the “show” in English. 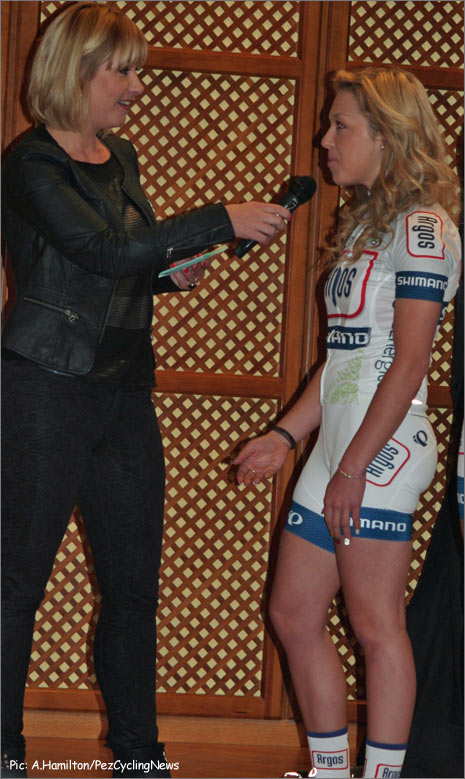 The breakfast chat with the Dutch guys didn’t include any cycle sport talk, after the opening pleasantries on the subject of weather, good here; crap in Holland, their biggest interest was whether Scotland would become independent. Seeing as I hadn’t lived there for a long time I couldn’t really help them, all I could was to draw a comparison with the recent independence vote in Catalonia where the party calling for independence won the most votes in the Catalan parliament, but lost the vote on independence. The same thing could happen in Scotland. Holland has a population of 16 and Scotland only 5 million, comparisons were difficult. 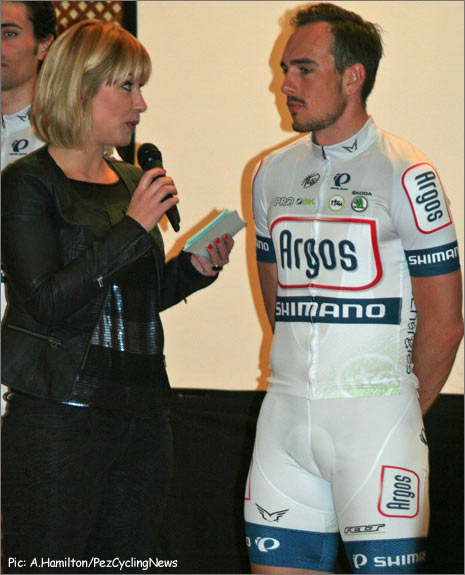 Breakfast over it was down to the large presentation hall, all the seats were reserved with our name tags and a nice bag of goodies, pens, a Felt cycles key ring, T shirt, writing pad, Argos 2013 diary and best of all a team Argos-Shimano press guide with facts, figures and a quote from each rider, very handy for the coming season. 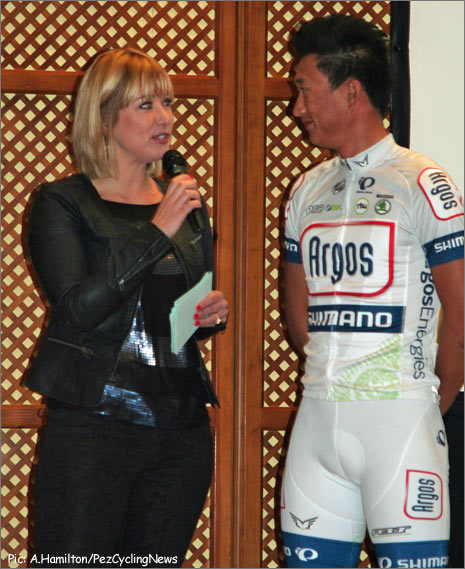 After a promotional video, team manager; Iwan Spekenbrink explained the teams’ policy of Inspiration, Integrity, Improvement, and Innovation: “A core part of Team Argos-Shimano’s policy is to work from a modern and credible top-class sports environment based on the 1t4i guidelines. Innovation at every possible level is central both to the intensive and comprehensive coaching of the individual cyclists, male and female, and to developing the team into a strong collective.” 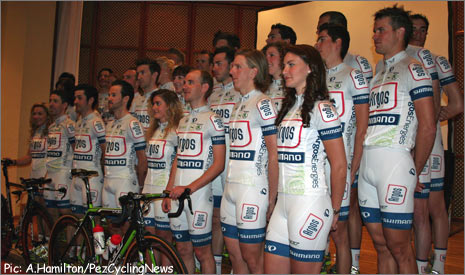 Both Argos-Shimano teams for 2013.

After introductions of the Director Sportif’s and trainers, the riders were brought forward in groups of four. Carrie ten Napel; the presenter kept the banter light, but did go a bit close to the bone on a couple of occasions. When Johannes Frцhlinger came forward she likened him to George Clooney, not to look at, but due to his liking for coffee. After a long explanation on his coffee preferences, she remarked “so coffee is your drug!” It did get a laugh. 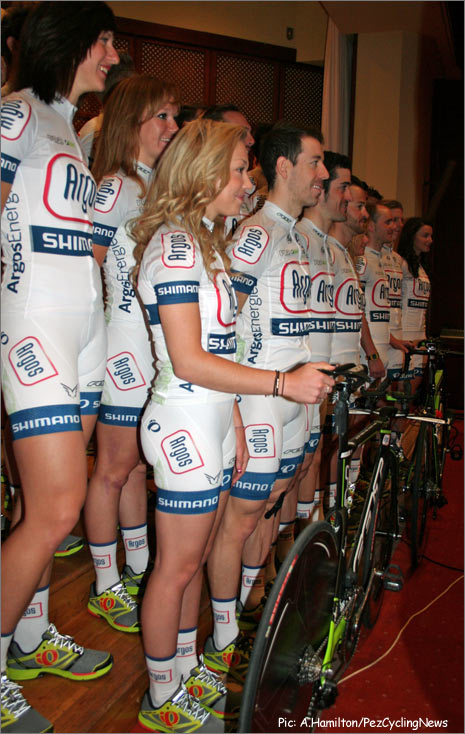 The next comment on another rider was that he loved speed, Carrie: “Hey, I don’t mean amphetamines, we have to be careful what we say here!” She topped it all off when introducing Lucy Garner, the double World junior road race champion; “many say she is as talented as Marian Vos…but with the looks!” this brought quite a groan form the mostly Dutch crowd. 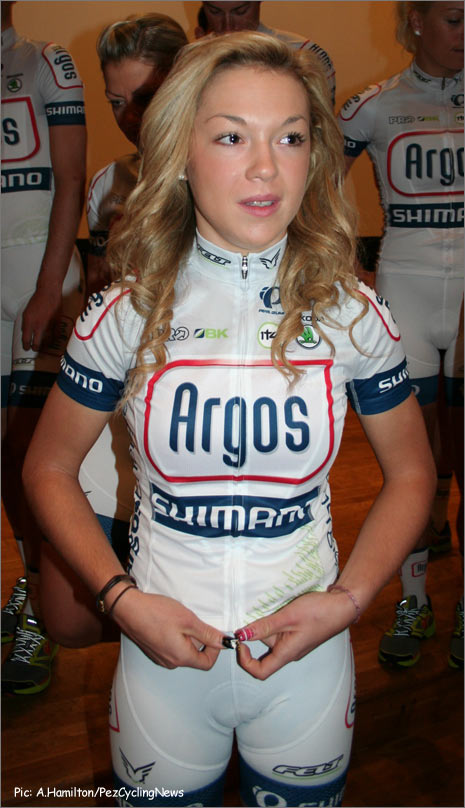 Last up were the representatives of the sponsors, the Dutchman for Shimano Europe much preferred the Spanish weather to the rain and cold of Holland, understandable. Then Jan Dirks of Argos recounted how team manager; Iwan Spekenbrink was panicking trying to explain that the five stage wins by John Degenkolb at the Vuelta last year was not normal and can’t be guaranteed to happen every time. 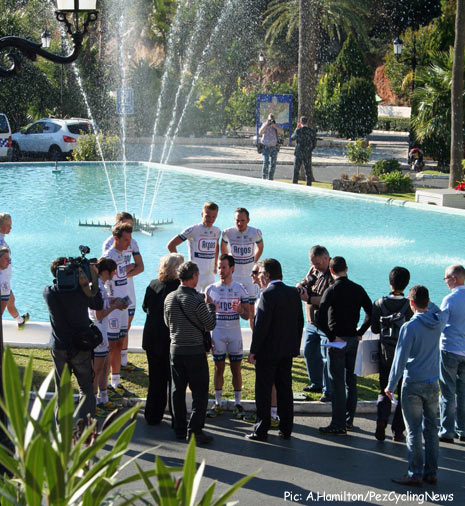 We had the scrum of photographers trying to take a photo of the two complete teams and as usual the fat guys won, pushing everyone else out of the way, a similar thing happens through in the bar where the very nice selection of nibbles were set out for the journalists and riders to graze upon whilst having the informal chat. 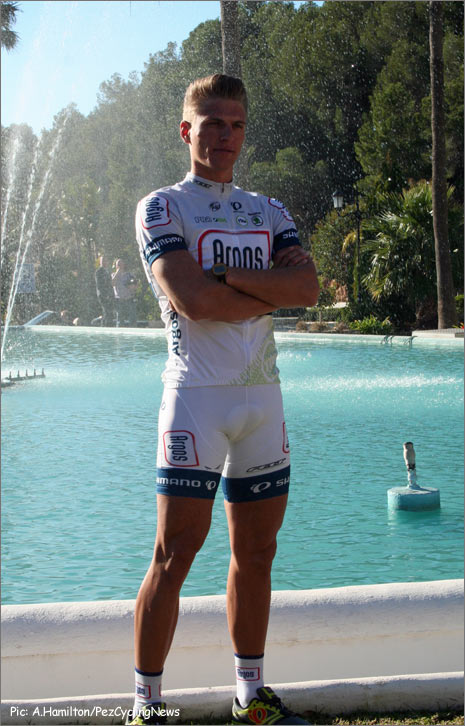 Marcel Kittel, not a hair out of place. 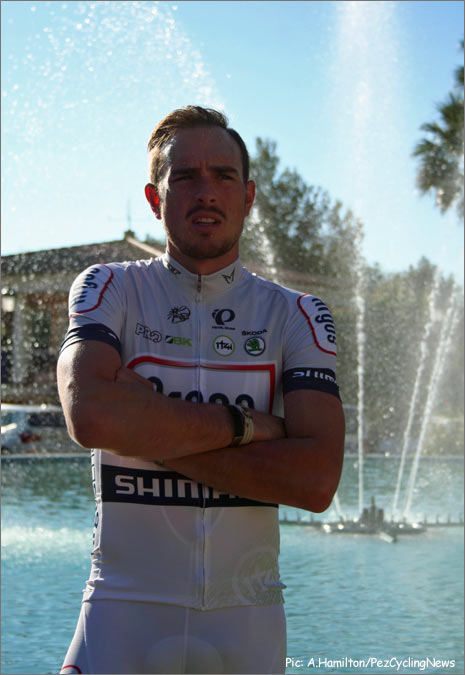 Degenkolb; looking to the future?

The riders were mostly congregated at one end of the open air terrace bar and the journalists would come forward and pick a rider to interview, it reminded me of school dances, some were popular and others were wall flowers. Obviously Degenkolb and Kittel were in high demand, so much so I don’t remember seeing Kittel. I did manage to get hold of Degenkolb, Tom Peterson and Elke Gebhardt, they will be coming soon on PEZ. 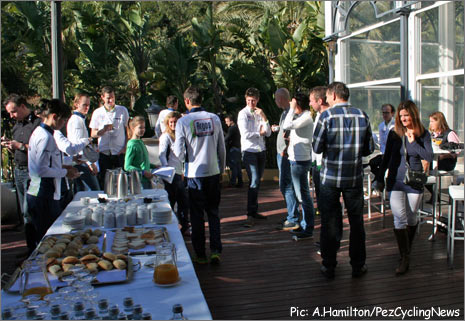 Not a bad setting for a team presentation.

A nice surprise was to bump into Josй Been, who I know through Twitter (@TourDeJose) and her great blog at tourdejose.com with its up-to-date info, she was flying in and out just for the presentation. I also ran into Charles Ojalvo of the Vuelta and ASO, he assures me that the Vuelta a Espaсa won’t lose its unique personality; it won’t turn into the Tour. 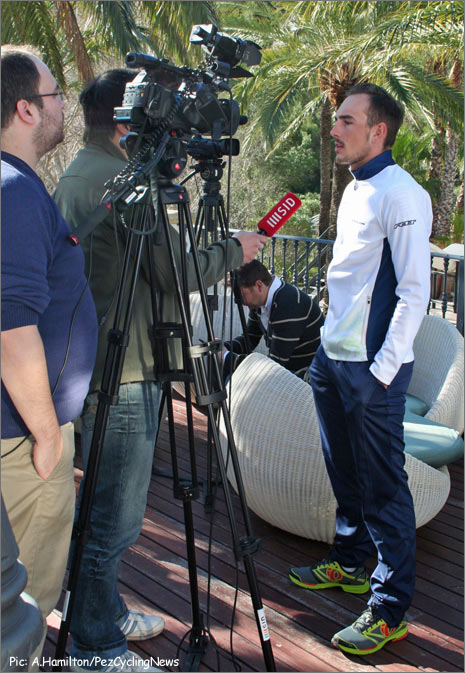 I only had the Service de Course to see where the masseurs sort out the bottles and the mechanics look after the bikes and it was off home to write this up. 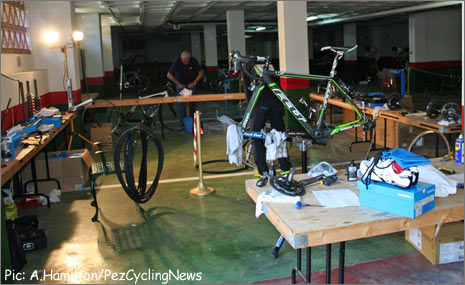 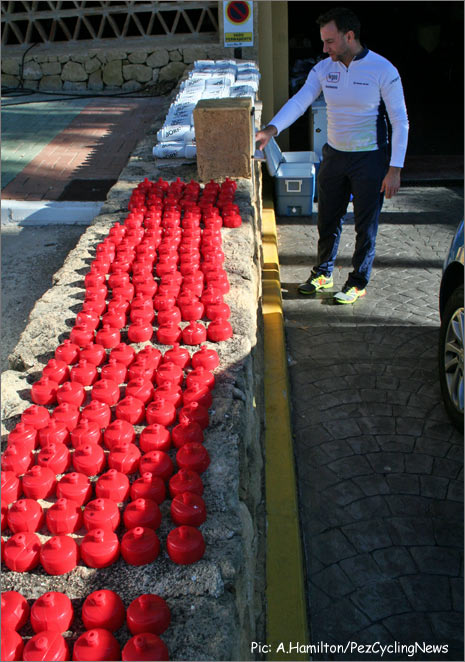 All in all it was a very pleasant day; everyone on the team is very happy and up-beat about the future of the team and cycling in general. It’s the WorldTour team with the youngest average age and with a great future ahead of it, we hope. 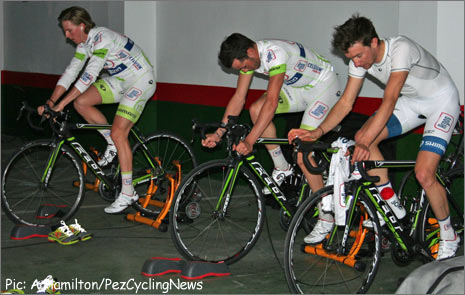 It’s not all interviews and nibbles.