It seems (around the chat room at least) there’s no middle ground on either the Armstrong or Contador cases – we’ve read the decisions of the powers that be, and while both cases remain clouded in gray, a lot of fans see black & white – even without real knowledge of the reasons behind either decision.

The editorial inbox here at PEZ has been both applauded and flamed for (up till now) not taking a position either way.

Eugene from Oz asks: “Are you afraid to have an opinion?”, while Mark from Santa Rita comments: “I am really proud of Pez not reporting on the “trash” that occupies the other sites.”

From PEZ HQ, I think I can speak for most (even all) of the Crew when I say that we’re not afraid to have an opinion, but unless we get direct access to either Lance or Contador and can ask our own questions, then all we have to report is the same regurge you’ve already read – 99% of which is presented as ‘original’ content.

We prefer to not waste your time with useless speculation, or adding fire to the rumor-mill – you know where to find that stuff if you want it.

So until we get something solid to report, let’s call this spade what it is – with such little real info out there about either case, public opinion really boils down to whether you like the guy or not – so here’s a selection of the some of the greatest racing moments of both Lance & Alberto. Whether this helps you choose a side is anyone’s guess, but at least they’re something we can all agree really happened… 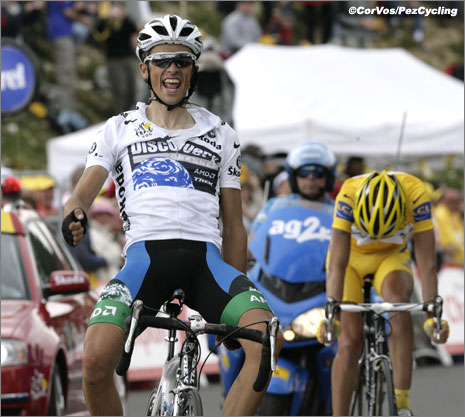 – Let’s go way back…when he really catapulted onto the scene. Sure, he had a fair number of wins before he struck pay dirt on Plateau de Beille in 2007, but that win in the Pyrenees brought him to the fore. A little less than a week later, following the dismissal of Michael Rasmussen, he was Tour de France champion. His dominance began. 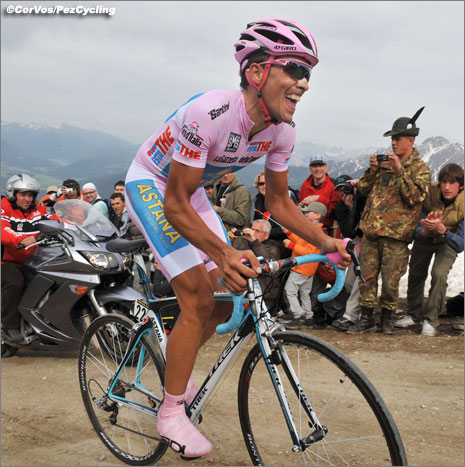 – He didn’t get a chance to defend his Tour de France title in 2008, but he did get two chances in the other two Grand Tours – he won both. With less than ideal preparation, Contador took a thrilling duel with none other than the most infamous rider currently imaginable, Riccardo Ricco, for his first Giro crown…without winning a stage. 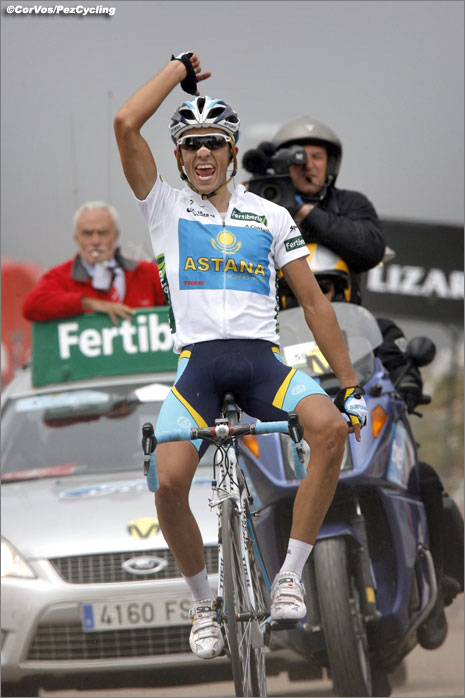 – A few months later, Contador got his chance to shine again, but this time he was ready and primed for action in his home Grand Tour. He was unstoppable. His victory salute on the Angliru following a masterful performance was one of the rare occasions where the Pistol felt just right. 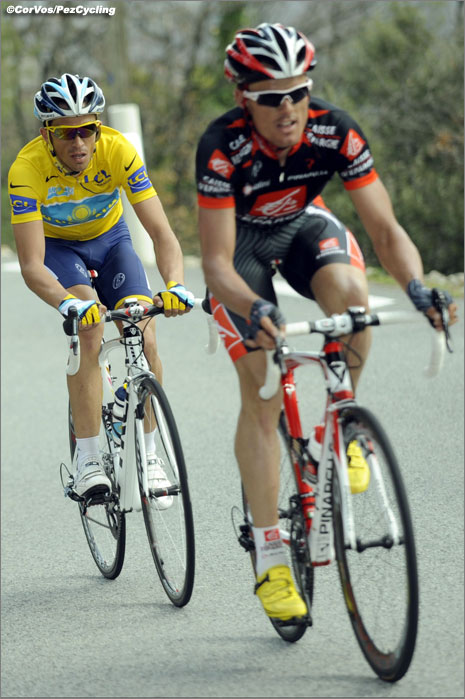 – Contador continued his dominance into the 2009 season with an impressive showing at Paris-Nice. That is, until it wasn’t impressive at all, and it became impressive in its disastrous nature. The still young Spaniard suffered a monster case of the bonk to lose his seemingly insurmountable overall lead to Luis Leon Sanchez. It certainly wasn’t a highlight in Contador’s career, but during that run of can’t-touch-this, it was a brief display of, well, humanity. 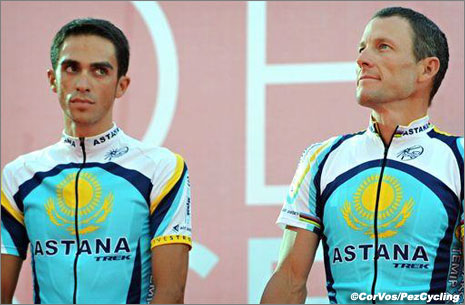 – Then came the Lance and Alberto show. We’ll just leave it to these two to make awkward sideways glances at each other and leave it at that. 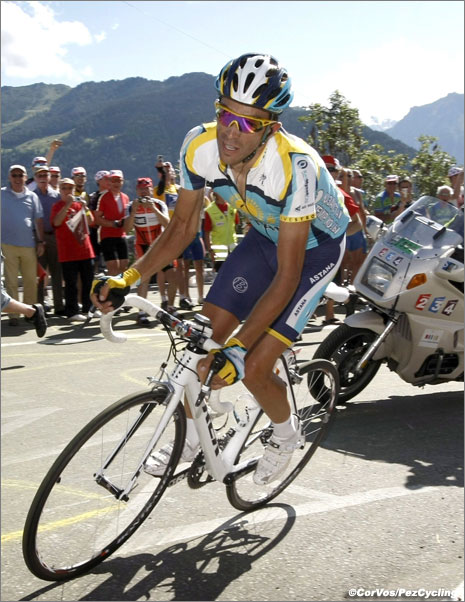 – Thankfully, the race was decided on the road, and Lance (and everyone else) was left gasping as Contador destroyed all comers on the road to Verbier. They said it wasn’t long enough, or steep enough, but it was more than enough for Contador to emphatically proclaim his top spot in the race. This has to go down as one of his most dominant moments. 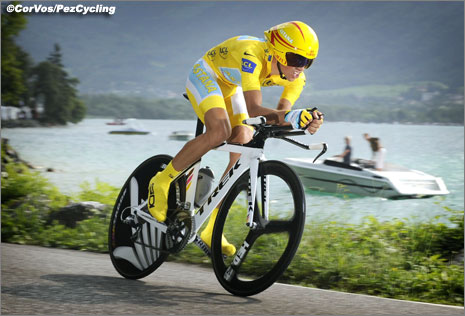 – Along with his time trial around Lake Annecy. You know you’re on fire when you beat Fabian Cancellara in a major time trial, at least until 2011. True, the wind shifted dramatically in favor of Contador that day, but still…it was an impressive ride. 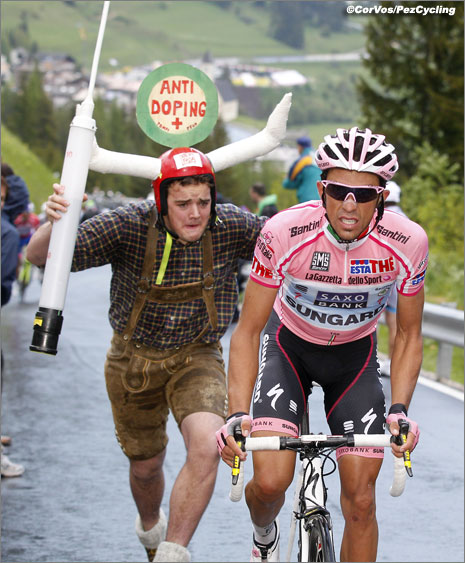 – Then it all goes blurry. The clenbuterol positive in the 2010 Tour started a nearly 600 day run of question marks…but during that time, Contador was still able to notch up that contentious win in the 2010 Tour de France as well as a dominating overall victory in this spring’s Giro d’Italia. He was in a class unto himself. The race was widely criticized as being crappy, a freak show, a procession. Such is often the case when you have a rider like Contador at his best – see Lance Armstrong below.

And, let’s look back at some of Lance’s biggest racing exploits. 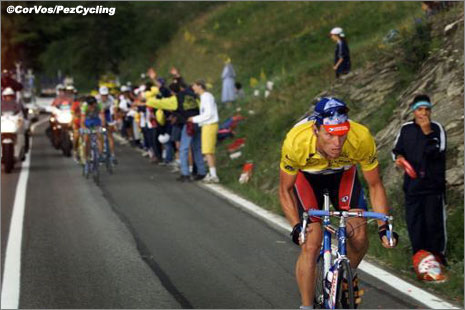 – Of course, Armstrong has a million and one results to look at, but for the sake of simplicity, let’s go back to when the legend really began, when he started his ascent to mega-stardom. Yeah, that crappy day in 1999 in the French/Italian Alps with the finish to Sestrieres. It was the first time the world got to see Armstrong do what he’d do over and over again over the next seven Tours de France – crush. 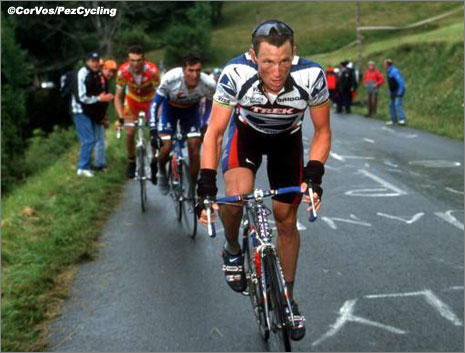 – In 2000, the destruction day would be Hautacam. There was no one that could hold a candle to Big Tex, not even one of the greatest climbers the sport has ever seen – Marco Pantani. 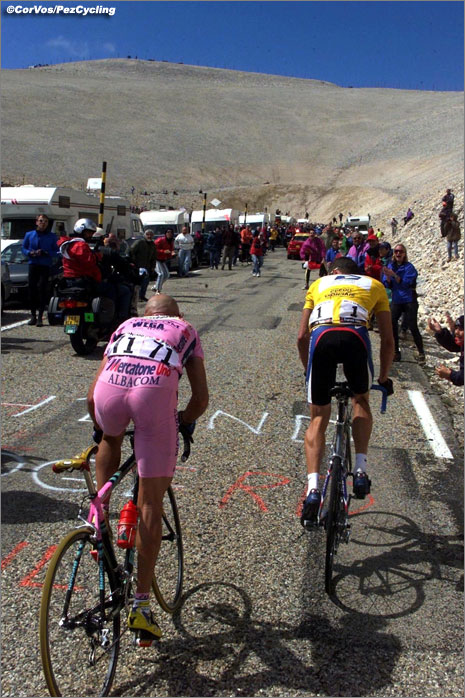 – Speaking of Pantani…no account of Armstrong’s greatest moments would be complete without that unforgettable day on Mont Ventoux in 2000. Sure, it was tarnished by polemics between the two afterwards, but for a brief moment, they were a beautiful sight. Armstrong’s bridge up to Pantani on the Ventoux still stands as one of the more jaw-dropping displays of power that PEZ has seen. 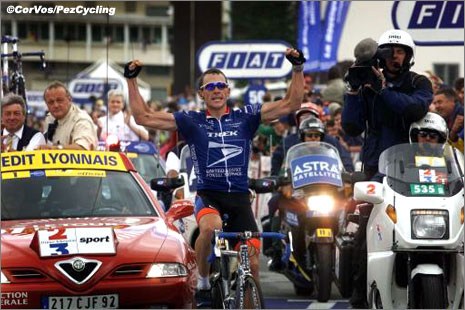 – Along came 2001, and then the legend hit hyper-drive with Armstrong’s ascent of Alpe d’Huez, which began with the hateful stare kindly known as ‘The Look’. It was Armstrong at his finest. 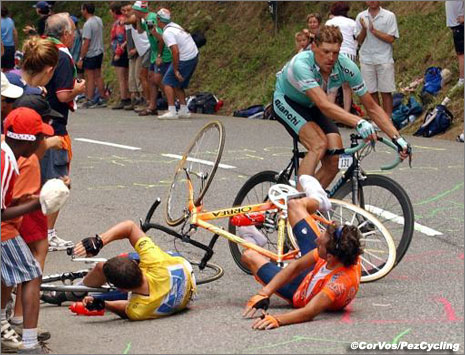 – Armstrong was even more dominant in 2002, if that’s possible, but in 2003, he finally ran into some problems, well, one big one in Jan Ullrich. Ullrich threatened to dethrone Armstrong, but amazing (still to this day), Armstrong was able to right his sinking ship and battle back after slamming to the pavement on Luz Ardiden. 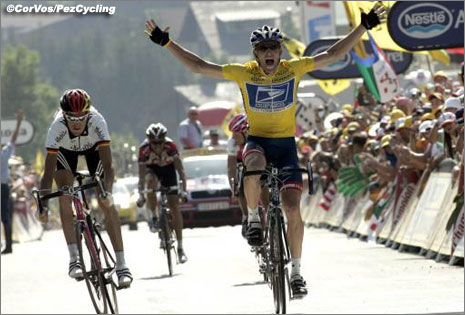 – After 2003, many thought 2004 would be the best Tour yet…but it wasn’t. It was Lance back to his utterly dominant ways, and nothing screamed domination like his out of nowhere win in Le Grand Bornand. I think there’s very little everyone will agree on with Lance Armstrong, but one thing is undeniable – his victory salute was not of the typical arms to the sky variety. It was all adrenaline-fueled, passionate exclamation point, and it was awesome. 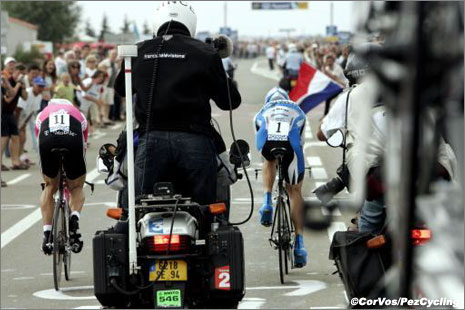 And #7? It was over before it even started. Armstrong crushed Ullrich in the opening time trial in, wait for it, yet another display of did-that-just-happen?

Take it or leave it, doped or not, these events did happen, and for the most part, they still live on in the history books. It’s up to you to decide how you want to remember them.
Like PEZ? Why not subscribe to our weekly newsletter to receive updates and reminders on what's cool in road cycling?

The Contador Case: What Now?