Comparing the first five-time Tour de France winner Jacques Anquetil to the latest five-time Tour winner Lance Armstrong, we examine the similarities, differences and principal adversaries to project the outcome between Armstrong and Ullrich at this year’s Tour. (Hey – it beats the Magic 8-Ball!)

When Lance Armstrong rolls down the prologue ITT start ramp on July 3 he will be at the beginning of his attempt to do what no other rider has done – win six Tour’s de France. Before Armstrong, four other riders had won five Tours: Jacques Anquetil, Eddy Merckx, Bernard Hinault and Miguel Indurain. 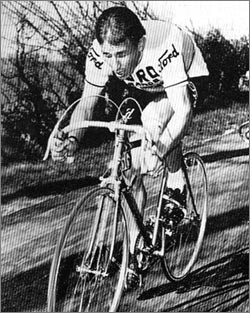 Jacques Anquetil – reknowned for his fluid style and tt ability.

Comparing these five great champions is a difficult task because their physical abilities, mental attitudes and the era they raced, were very different. Interestingly there are many parallels between Jacques Anquetil, the very first five-time Tour winner, and Lance Armstrong. Anquetil introduced ‘modern time trialing’ techniques and totally dominated the discipline. His fluid aero style was a revelation and ‘in race after race’ he was able to turn over huge gears with apparent ease. When it came to the Tour ‘maitre Jacques’ would plan his race around the time trials. In the mountains he was less gifted but through sheer will power was able to limit his losses and match most climbers pedal stroke for pedal stroke. By comparison Armstrong has also used the time trial to seal his Tour wins. In the mountains he has learned to stay with the best and, unlike Anquetil, win mountain top finishes. But it must be said that Anquetil’s Tour era saw probably the greatest climbers of all time – Spain’s Federico Bahamontes (the Eagle of Toledo) and Luxembourg’s Charly Gaul (the Angel of the Mountains). At high altitude nobody bettered these two astonishing ‘grimpeurs’.

Like Minded Approach
One area where Anquetil and Armstrong come together is in their approach and attitude to racing. They plan their race campaigns with meticulous care. Anquetil was a pioneer in race preparation. He would go over important courses (mostly TT’s) before the race and note every feature – where the cars had made the road surface smoother, which gear to use and where. No detail was left to chance and on race day he would follow his plan exactly. Armstrong has lifted Anquetil’s approach to race preparation to a new level by scouting out much of the Tour’s route (climbs and difficult stages) every year. A strategy mimicked by all of his main adversaries. 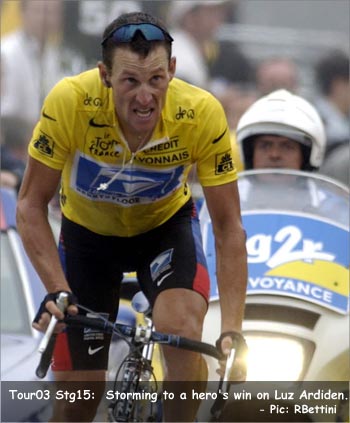 Show Me The Money
Both men made a lot of money for their talents, but Anquetil openly admitted that cash was a source of inspiration. Anquetil’s average appearance fee was about $300, and he made about $70,000 per year throughout his career which lasted until 1969. To put that into context, my parents purchased a medium sized house for about $3,500 in 1961 and they needed a 30-year mortgage to support it. A very good salary at the time was around $1,500 per year.

By contrast Armstrong makes millions each year. Unlike Anquetil who made most of his money from race appearances, Armstrong’s comes from product endorsements. In that respect the world has changed dramatically for top professional cyclists. In Anquetil’s own words: “Cycling is very hard for me. In a normal road season I start training in February and race on average five days per week until the end of October. In August and September (after the TdF) it is every day, often with an 800km car journey through the night from one engagement to the next. I race so often that training is only necessary on special occasions once the season is under way”. Again by contrast, Armstrong focuses his whole season on just Le Tour; everything else is training and preparation. 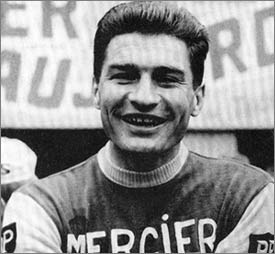 Gee, That’s a Nice Bike, Mister.
So we see the similarities with time trialing supremacy being used as a strategic weapon, and meticulous preparation as a competitive differentiator. Where they really differ is in equipment. Anquetil cared little for his bike and he left most decisions to his mechanic. Armstrong, as we know, is deeply involved in high tech innovation and goes to great lengths to achieve miniscule advantages.

Behind Every Great Champion, Is Great Rival
Beyond the two men, the next level of comparison is with the competition. Probably the greatest rivalries in cycling history were those between Anquetil and Raymond Poulidor in France and Fausto Coppi and Gino Bartali in Italy. Coppi and Bartali polarized Italy with the entire country split almost evenly for one or the other. In the case of Anquetil and Poulidor the vast majority of French people were huge Poulidor fans. Pou-Pou, as he was affectionately known by the public, never won a Tour de France. He was second three times and third five times. Anquetil was seen as an ice-cold calculator, clinical in his approach to the sport and aristocratically arrogant. He simply could not connect with the public, no matter how much he won. Poulidor, as strong as an ox, was personable and his never say die attitude gained great popularity. Known also as ‘the eternal second’, Poulidor was adored by a nation that loves the underdog. 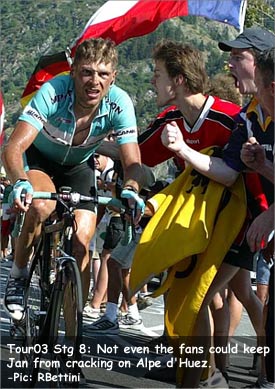 Whenever Anquetil was in the same race as Poulidor it seemed that he was obsessed with never letting him gain the upper hand. In the 1966 Paris-Nice Poulidor beat Anquetil by 36 seconds in the 35.5km TT. This totally outraged Anquetil. On the final stage Anquetil and his team attacked race leader Poulidor endlessly. One reporter counted 38 attempts. The 39th attack came from Anquetil on the Tourettes-sur Loup, a mild slope whose summit was about 34km’s from the finish in Nice. From the eyewitness account: “Poulidor clung to his tormentor’s wheel, leaving the bunch behind, before having to finally give in. Three times that day I saw what a man riding to his limits looks like. The expression on Jacques’ sweat-streaked, hollow face; I’ll never forget it. They say the eyes are the mirror to the soul. Over those miles of triumph this man’s soul was remorseless, seeking vengeance”. Many believed that those final km’s were ridden as fast as any of Anquetil’s record breaking TT’s. The luckless Poulidor rolled over the finish line with the bunch 1 minute 24 seconds after Anquetil “his face a black mask of despair”. That race characterized the obsessive nature of Anquetil’s attitude towards Poulidor. It was the model for their rivalry throughout their careers.

Although Armstrong’s rivalry with Jan Ullrich cannot be considered as intense as that between Anquetil and Poulidor, Amrstrong places Ullrich above all as his primary adversary. We’ve seen some great moments when the two have battled it out. The most famous incident was when Lance, after playing possum all day, gave Ullrich ‘the look’ on Alpe d’Huez. Whenever we see the two in the heat of battle, usually up the great climbs, they will invariably be riding close to each other. Faces streaked in sweat but maintaining a passive look to avoid giving away any emotion or sign of weakness. Even though there are some very serious pretenders to Lances’ throne this year, he still rates Ullrich above the rest. Unfortunately for Jan history is against him. If Anquetil was riding then Poulidor was consigned to second (at best). Likewise even though he has won a TdF, Ullrich has never bettered Armstrong in a Tour that they have ridden together.

Kill Or Be Killed
It is here that we come to maybe the most important comparison between Anquetil and Armstrong. Both riders possess a unique killer instinct that enables them to rise well above all adversity and pain. For them, to win is the only acceptable outcome. While Poulidor and Ullrich possess the physical attributes, they do not have that inbred ‘hunt and kill’ mentality. It is this mental power that will again prevent Ullrich from vanquishing Armstrong if this year’s Tour comes down to the two of them.

Graham R. Jones rides often, is an actve member of the CCB International cycling club, and publishes their website. To read more about this dynamic club visit the newly overhauled CCB web site at https://ccbracing.com . And if you are visiting the Boston area join ’em on a club ride.
Like PEZ? Why not subscribe to our weekly newsletter to receive updates and reminders on what's cool in road cycling?