PEZ Goes to the Movies: Around Britain

In 2017 Briton Mark Beaumont smashed the record for cycling around the globe, completing the circumnavigation in less than 80 days. This epic journey is the subject of an excellent two-part documentary on GCN+, “Around the World in 80 Days,” but GCN+ has recently released a “prequel” to that. In preparation for his attempt, the cyclist undertook a test of himself and his team to see if the record would be possible and if all the systems they had worked out would function. He felt if they could work together for two weeks and he could maintain record pace for that time, there was a chance at the sub-80 mark later in the year. The documentary “Around Britain” is about that test.

By 2017, Mark Beaumont was no stranger to endurance challenges. In 2008 he set the then-record for cycling around the world, followed by a ride from Anchorage to Southern Argentina in 2010. In May 2015 he undertook the fastest ride from Cairo to Capetown (42 days) and, closer to home in November that year, the then-fastest time for the North Coast 500, a 518 mile circuit around the north coast of Scotland. However, these were all accomplished as solo ventures and his plan to ride around the world in 80 days could not be done without a team. The plan was for him to ride nearly 400 kms every day for nearly 2 1/2 months and a dry run was planned that would see him ride around the circumference of Britain at that rate. 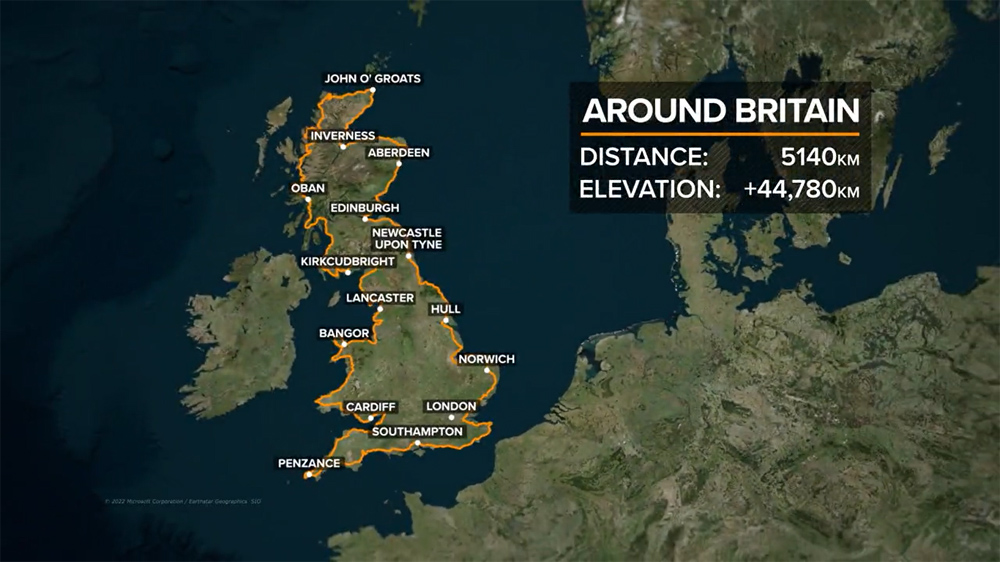 Mark Beaumont tends to discount his athletic prowess as he does not claim to be a professional cyclist but it is clear his physiology is of a quality that allows for these extraordinary feats of endurance. By way of comparison, the Race Across America (RAAM) is considered the hardest cycling event and in current format is 4,940 kms long, with 53,340 m of climbing. Beaumont’s route was actually longer, at 5,140 kms, and although there was somewhat less vertical (44,780) much of the British coast appears to be steep climbs of infinite number. 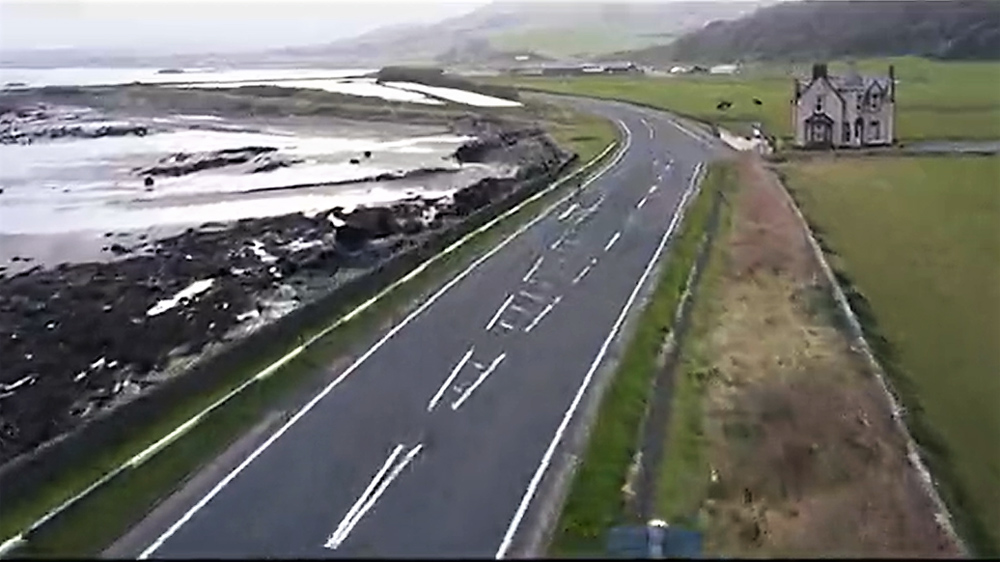 As we saw in a recent video about RAAM reviewed here, the importance of a smoothly-functioning support team cannot be underestimated. The team member in charge of logistics, points out in “Around Britain” that it was known that mistakes would be made and that the team would learn from them. The team needed to show its adapatability. In addition to mechanics and a media crew, the other strong presence is Laura Penhaul, the performance manager and it is clear to the viewer who is in charge of what as she looks after the rider while Mike Griffiths is Mr. Logistics. As Mark Beaumont notes, the event is not like going to the office but for two weeks is a pressure cooker, 24/7, and the crew suffers as much from sleep deprivation as the rider. He says, in what must be British understatement, “There were frustrations. There were short words.” 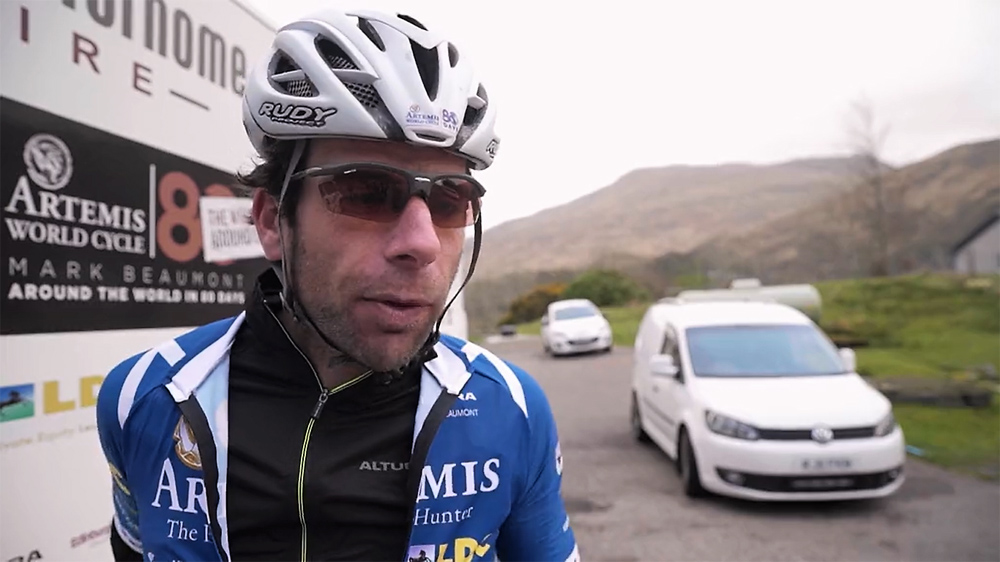 The procedure sounds simple enough: the cylist wakes up at 3 am, is on the bike at 4, then rides four blocks of roughly 100 kms, or around 16 hours per day on the bike. Day in, day out. Things start off badly as the beet juice that Mark Beaumont was supposed to be consuming prior to the start (but wasn’t) upset his stomach when he was given it at the start line. But soon the miles are disappearing under his wheels and leaving London he makes good time up the west coast of England. But some adjustments need to be made. The team wants to keep him off arterial roads and shepherd him down narrow lanes (although at one point the accompanying RV won’t fit!) while Beaumont wants to ride on busy roads to maximize his speed. That would be the case for the around the world challenge as often there were only primary roads, and in “Around the World in 80 Days” any viewer will be terrified by the scenes of riding through Moscow traffic, which Beaumont is completely nonchalant about. 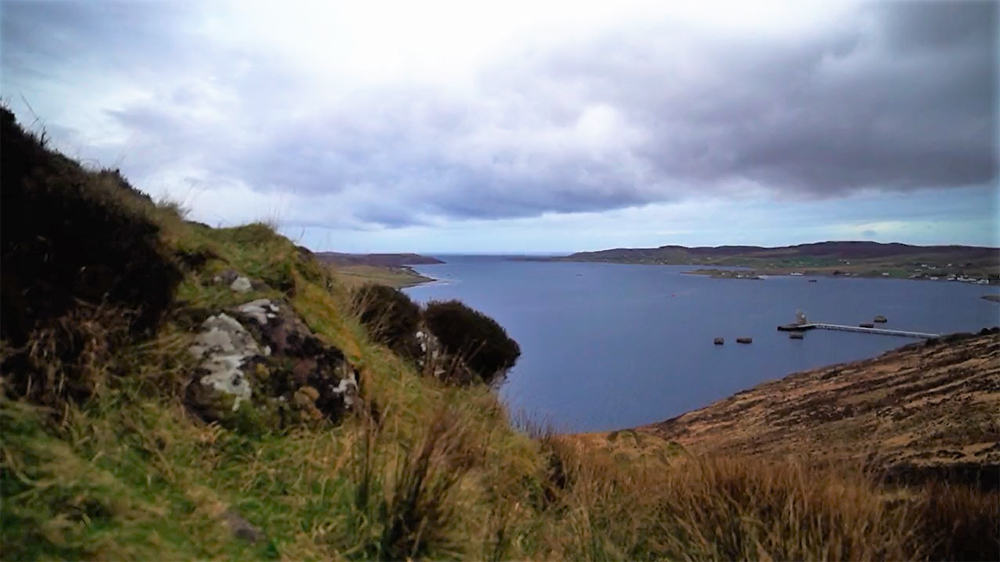 Other issues come up unexpectedly, including the team losing the rider. While they had not really thought about this it can happen very easily. Another lesson learned. And small things can loom large if unattended: Laura Penhaul treats Beaumont for hamstring problems, which should not happen to cyclists, but discovers that at one point he has doubled up his shorts. Everything must be tested and when it works it should not be changed—good advice for anyone racing or doing an endurance ride. 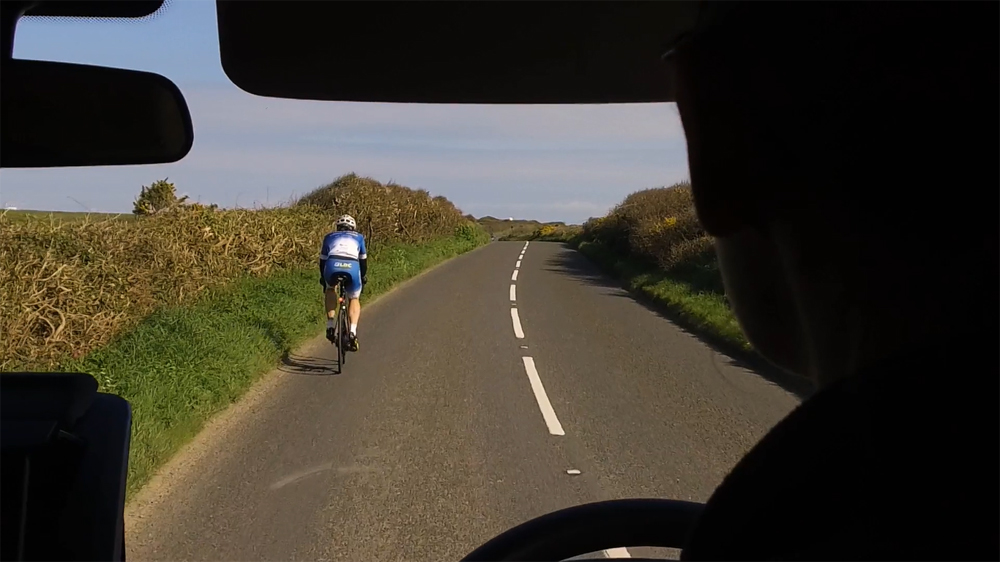 When he was 15 years old Mark Beaumont did the iconic UK ultra ride, Land’s End to John O’Groats, from the southeast corner of England to the northwest corner of Scotland. In this video, he comes to both these places but, following the coast, it is the long way around. On reaching the signpost for John O’Groats in near-darkness, he reflects on his previous ride twenty years before but also wonders aloud why, after 10 days from London, his current ride does not feel easier. He is worried about sustaining this pace for eight times the distance but given all that can happen the “Around Britain” trip seems to have gone off pretty smoothly. 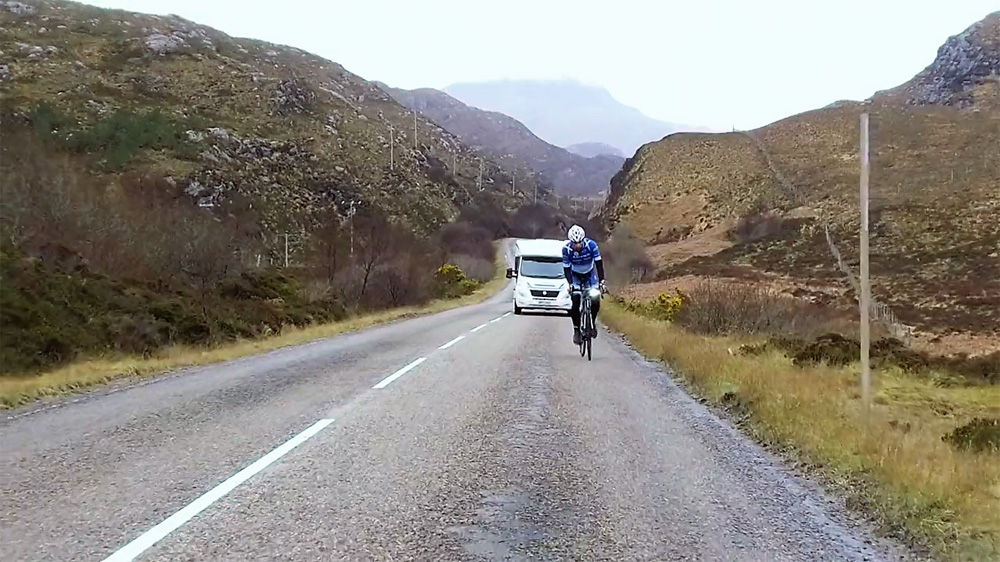 There are many scenes of great beauty, particularly in Scotland, that would entrance any cycling traveller but as is the case with almost every GCN and GCN+ video filmed in Britain, the rain is just terrible. (Note: even when GCN presenters went to Mallorca, Switzerland and Italy it rained there as well!). The amount of climbing is daunting as Mark Beaumont has to deal with things like back-to-back days of 5,000 m vertical. But one has to be impressed by the resourcefulness and dedication of all involved and this not-so-dry run’s lessons are reflected in the success of the world ride. Mark Beaumont followed the same precise, unvarying timetable as he did in Britain and exceeded the 80 day target comfortably. (Well, maybe “comfort” is a bad choice of words here). It is almost inconceivable that that record will be broken and, if so, it can only be done by a tiny margin. 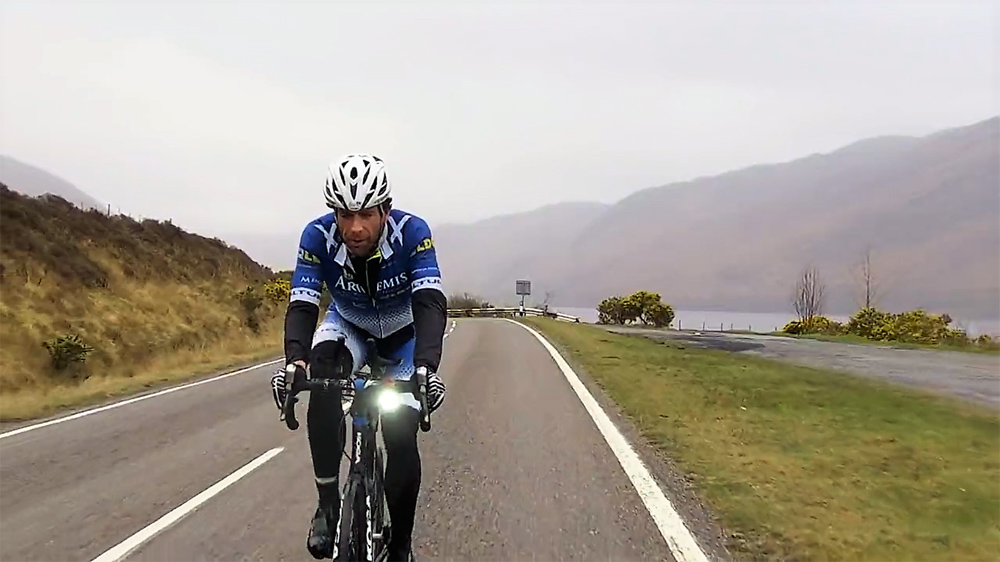 “Around Britain” serves as a look behind the scenes at the preparation for the even greater challenge. Looking back at it five years later, Mark Beaumont considers it to be the most brutal ride he has done but also one of beauty. He still wants to ride his bicycle: on June 14th he will cross the start line at the Race Across America, with the aim of breaking the pairs record partnered with Jonathan Shubert, another endurance rider who is the first cyclist to break the sub 3-hour mark for 100 miles.. The current two-man team record for RAAM was set in 2014 by the Flying Cyclasana Beasts (riding in the 50-59 age group!) and is 6 days 10 hours and 8 minutes, at an average speed of 31.53 km/h. This should be exciting… even more than Mark’s British One Hour Record on a Penny Farthing! 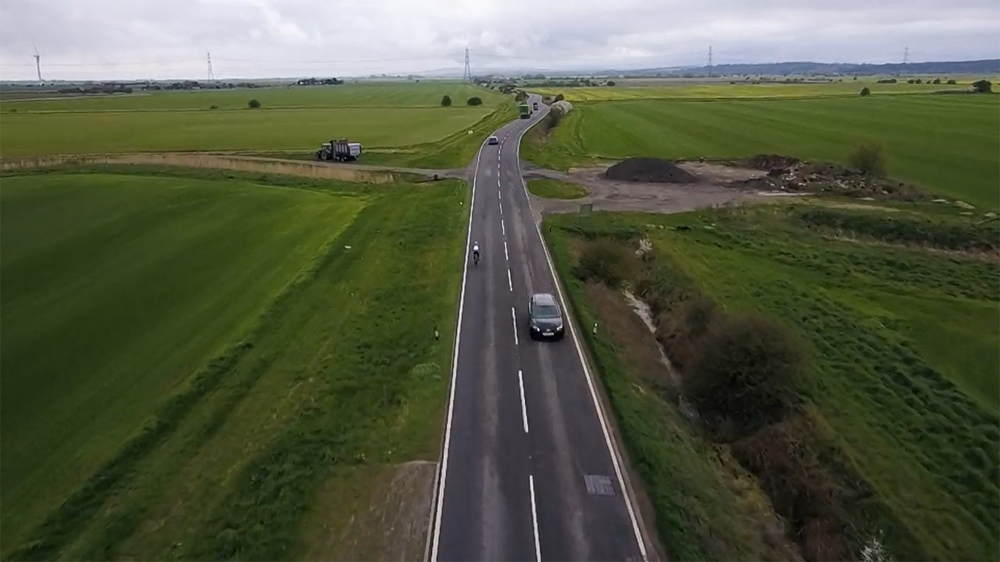 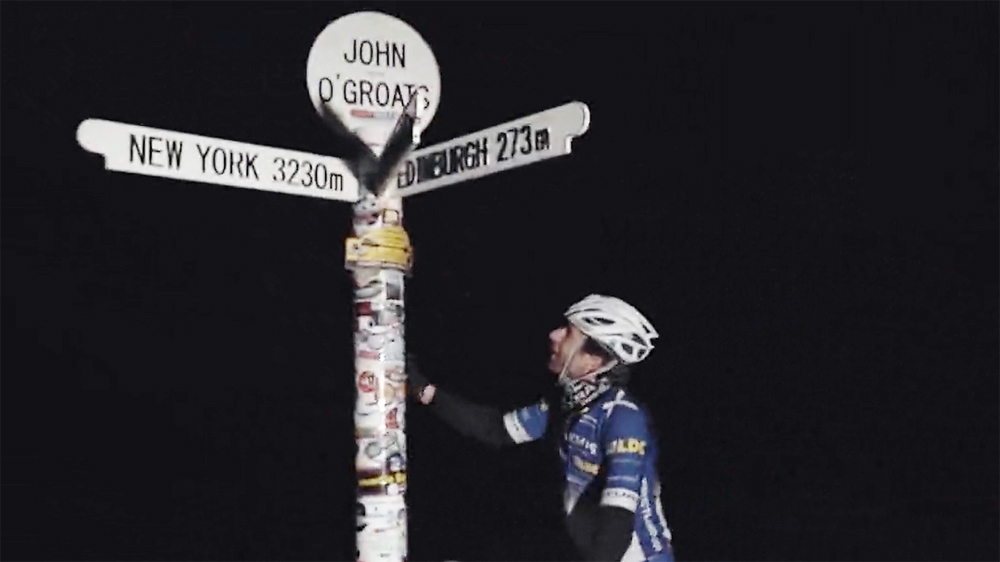