At The Giro With My Daily Distraction

At PEZ, we look forward to reader submissions, even moreso when it’s a story about following our favorite Grand Tour with lifetime Distraction in tow. Craig Gartland was lucky enough to enjoy the Giro’s ninth stage, which took in the mighty Monte Grappa. Here’s his story.

In 2003, I went with my brother-in-law to follow the Tour de France for 9 days. The trip was a gift from my wife, Sharon, to celebrate my 40th birthday, and was -as she had hoped- amazing. It was not that she did not want to go to France with me – far from it. It’s just that her idea of a good time in France did not include watching a bike race everyday – even if it was The Tour (She has watched plenty of my races over the years). However, she knew I would love it and I did. When I came back from the trip and told my cycling buddies about it, I was often asked, “Does she have a sister?!!”

Fast forward to 2010 and a trip to Italy to celebrate our 25th wedding anniversary. Unlike the ’03 TdF trip, we decided I would not be bringing my bike (among cyclist’s wives aka: “the other woman”). When we concluded that May would be the best time to take the trip, it did not take me long to realize that it was going to coincide with the Giro. Sharon conceded that one day of going to the Giro would/could be fun (or at least not unbearable) and we landed on catching stage 14 on the Monte Grappa.

When the day of stage 14 arrived, we were up and out the door at 6am as we needed to first get our rental car. Once that was accomplished, we started on our two hour drive to Monte Grappa using Italian road maps. This is exciting, and nerve wracking, and then exciting again, and then… Well, let’s just say that it is a good test of how strong your 25 year-old marriage is! First there is the reality that roads are not marked in the same way they are in the US. Then, there is the fact that the “rules of the road” are a bit different than they are in the States. However, it was mostly the first and not the later that caused stress. In fact, I find the Italian way of driving to draw upon much of what I have learned from bike racing: 1) Don’t use your brakes when you can accelerate (hit the gas); 2) Always make your moves smoothly, never jerky; 3) Respect the fast guys (and in Italy they are fast!); 4) He who hesitates is… in trouble. Very exciting. In fact it did not take Sharon long to turn to me that morning and say, “Hey, this is a whole country of people who drive like you do!”

After only a few missed turns, we finally made it to the base of Monte Grappa and a “legal” parking spot – marriage in tact. It was a gorgeous day and Sharon was immediately taken in with the festivity of it all. “It looks like it is decorated for a wedding!” 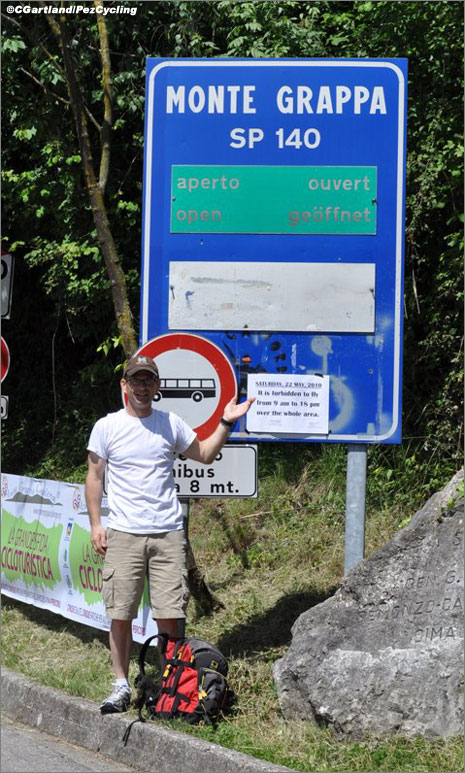 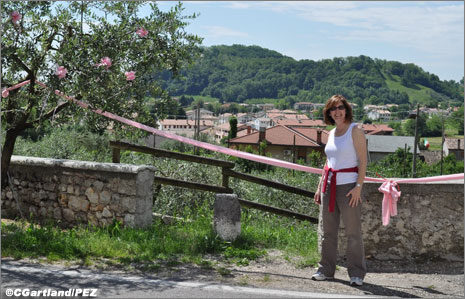 We began our hike up the hill and I was immediately amazed with how many cyclists there where heading up the mountain. And they just kept on coming. We had been in Rome before this, and then Venice and seen very few bicycles, let alone cyclists. Now we were seeing group after group of riders on beautiful Pinerellos, Cervelos and Colnagos – it made me quite happy and pleased to see that Italy was full of such folks (hundreds and hundreds by the end of the day)! Sharon’s thoughts were different than mine. She quickly asked, “How high up do you plan on us going?!” Monte Grappa is steep and the first few kilos do not feel that unlike those of Alp d’Huez. 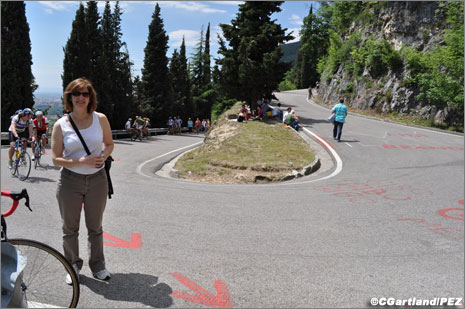 We took our time, and Sharon seemed to be enjoying the scenery as much as I was. We met all sorts of nice folks walking: a group of three Danish guys who come down to follow the Giro every year (this was their 7th time) and a pair of old Italian men who wanted to know why an American couple would be at the Giro (“Which American are you cheering for?”). Eventually, we stopped closer to the bottom of the hill than the top, but even there the view was tremendous. Sharon laid down and before taking a nap said, “Wake me when they get here.” 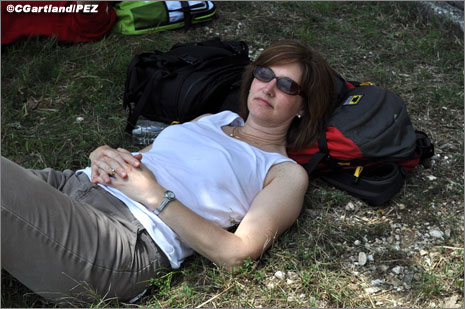 The first “big thing” to arrive was not the lead riders, but a cyclist who was riding up Monte Grappa about an hour ahead of the race… doing a wheelie the whole way. Amazing. Sharon agreed, that was worth waking up for! 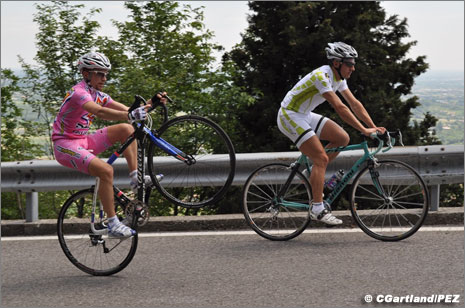 The front riders arrived to the sound of police horns and the television helicopters (which strangely came from “beneath” us as the riders scaled up the mountain). Sharon watched while I shot photos and more photos. At our point on the climb we caught the following “snap shots”: 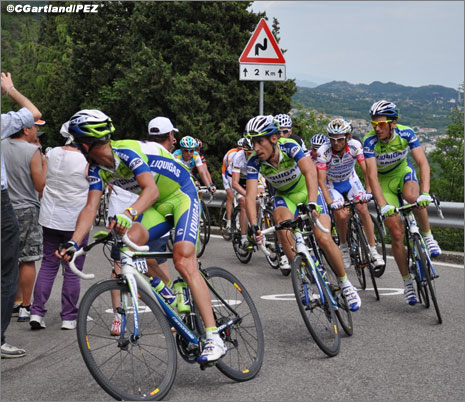 Basso and his team giving chase.

Pozzato looking strong (and to see how much the Italians “light up” when they see their national champ). 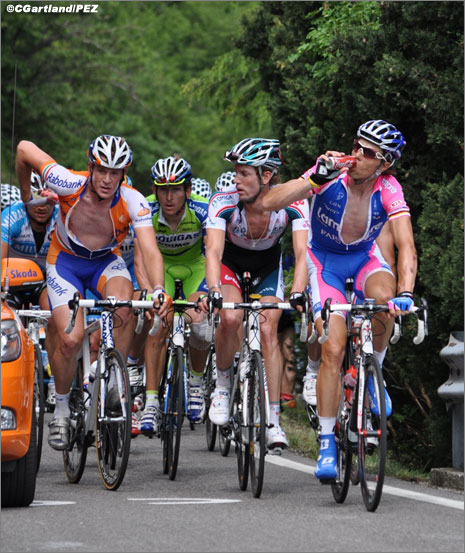 Michiel Elijzen of Lotto looking longingly at the cokes the riders around him where being handed.

Among many others. It all goes by so quickly really. And the Giro has less of the grand entrance (parade) of the Tour. And yet, it has a wonderful feel to it – and the crowds are no less enthusiastic. 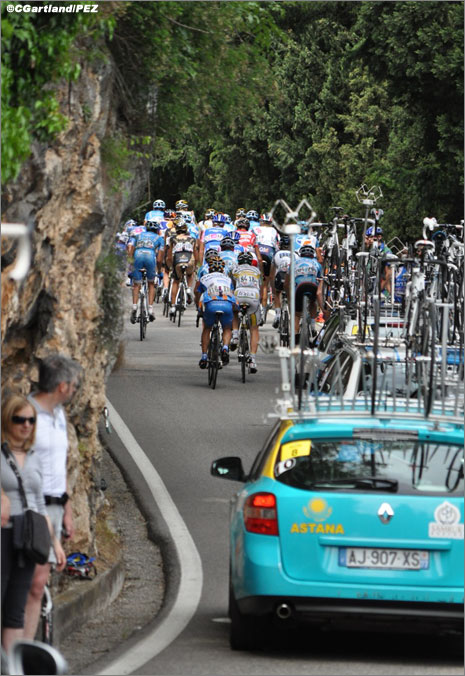 As we headed down the mountain, I stopped to take a few more pics of my Daily Distrazioni, Sharon. She had really enjoyed herself and told me the same, “What a great day this was!” – I think much to her amazement. But not mine! 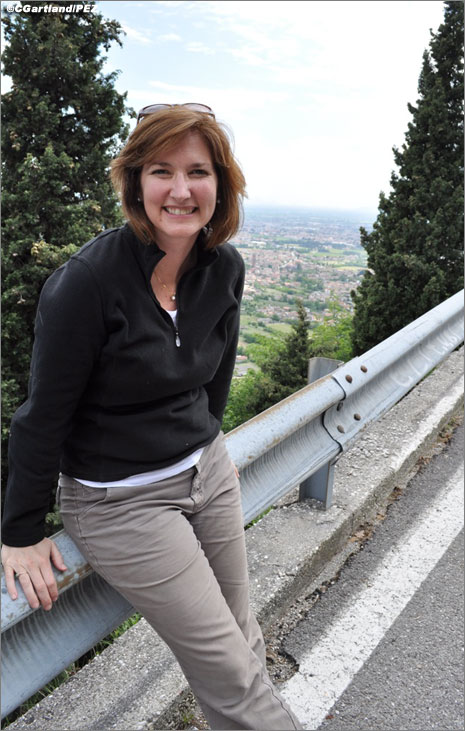 As we headed away from Monte Grappa we got a bonus. At least that is how I saw it. The traffic was stopped as the riders were about to come through to the finish at Asolo. I jumped out and caught a few more pics. 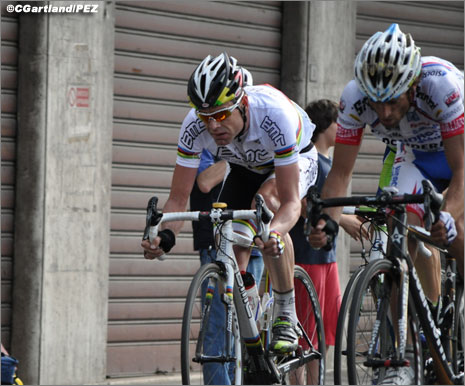 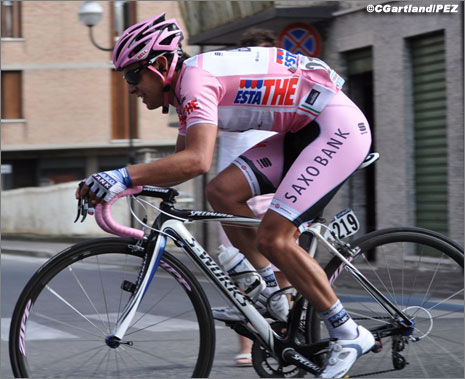 The pink jersey that was not going to be kept for another day. 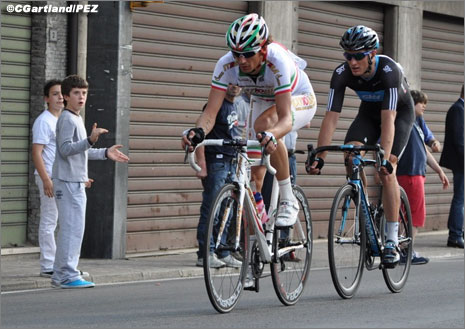 More adoration for those green, white and red stripes – look at the awe on that kid’s face! (even though Pozzato had popped hard by then).

I won’t lie, it was pushing it to watch the race yet a second time for Sharon, but the day was still ending well for both of us (which included a nice find of a Giro directional sign. Score!). Once back at the hotel, we got ready to go out for a nice anniversary dinner. Sharon looked lovely, and I told her, “I just have to take a photo of you for the Pez ‘Daily Distractions'” – and so I did.

I can not think of the day having gone any better than it did and that night we talked about how we feel that way about all these years of marriage. Awfully blessed. And no, she doesn’t have a sister. Sorry, guys!