Being creative is synonymous with thinking & doing “outside the box”. Never one to penned him himself, John Howard explores how exploring, expressing, and nurturing our creativity can also make us better cyclists.

Serious competitive cyclists, like many other dedicated athletes, often end up one-dimensional, a side effect of intense training and racing. Although this extreme focus can be personally confining, it need not limit the individual to a single field. The athletic mindset has the potential of expanding into the creative arts. 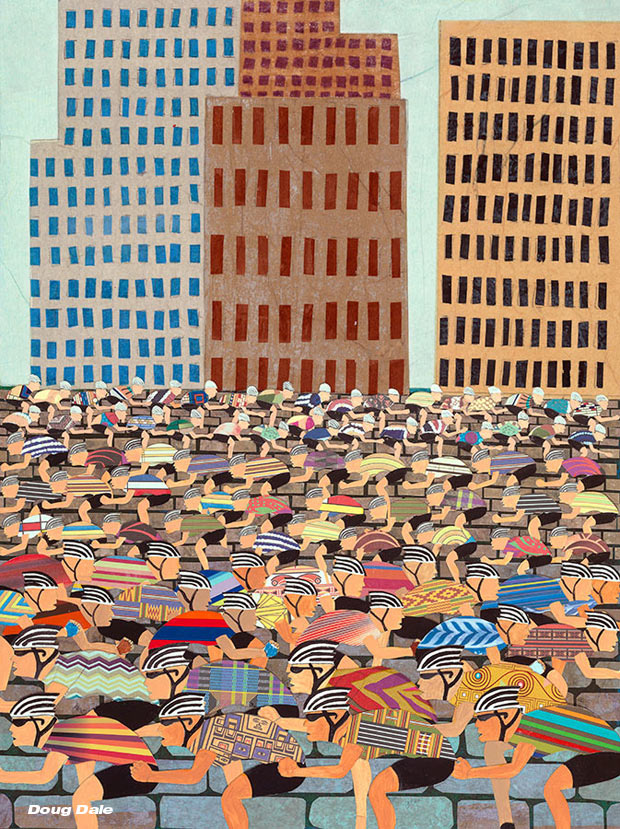 The training and racing process parallels the process of creating a work of art, as both processes require passion, focus, dedication, energy, and action. When recognizing these similarities, the athlete can direct his already highly developed skills into the field of creative expression, which will benefit from his/her nature of controlled intensity.

About the same time I began racing bicycles I started another career path as an eager 18 year-old art student at Southwest Missouri State University. The creative process was a pursuit of personal expression that titillated all the senses: visual, tactile, aromatic and auditory. I saw myself as a landscaper of ideas, & eager to plant, shape and cultivate those ideas. I defined my art forms in terms of ever expanding environmental potential. My partially fulfilled goal was to outrun the confines of the traditional studio with pure kinetic energy, more so than through a learned technique. The vast realm of artistic exploration constantly overlapped my cycling with boundless parallels of expressive athleticism. Likewise the creative incubation frequently occurred in the saddle.

As life evolved, the literal artistic process was eventually reduced to occasional sketching as the urgency to maximize career prime time became the priority. As a 10 year member of US National team and 3 time Olympian and later as a triathlete, I made training my job for more than 20 years. The pursuit of cycling and triathlon competition as a career path was not a difficult choice, I was good at it, and liked to win, so the electricity was spontaneous.

In terms of reward that’s about all there was in the day, because even at the top there were no sponsored salaries, no significant prize money, or even stipends to cover expenses. At a big race, you might win a transistor radio or a can of Dog Halt, but the real prize was the towering glitzy gold and silver and bronze trophies–usually plastic– that were supposed to make you feel exceptional because of your accomplishment.

To some extent it worked, they were artistic symbols of amateurism, reflecting the wishes of International Olympic head Avery Brundage, the overly zealous advocate of sports as play. With Brundage’s demise, the money train began rolling, amateurs became professionals, and the purity of symbolic, gaudy artistic prizes mostly disappeared. For me, it coincided with a closing of the international window of competition, so I transferred the expressive niche to coaching.

The ABLof A, turned USCF, re-invented as the USAC coaching platform, although marginally effective, offered little latitude for creative thinking, so to explain the tenants that I felt were fundamental building blocks of creative training and racing, I wrote books and hundreds of cycling performance articles. As a coach I viewed myself as a guardian of creative self-coaching. In the vain of Plato, I knew myself, and wanted you to know thyself. Rather than be a bike fitter who just turns bolts, I approached the science as a creative therapist and performed from the platform of structural antimony.

Eventually, through the universe of synchronicity an expressive pathway reemerged. Recently I’ve rekindled the artist’s energy as a cyclist and vice versa. This happened not by chance when a number of highly creative/athletic and thankfully inspiring people emerged in my life. 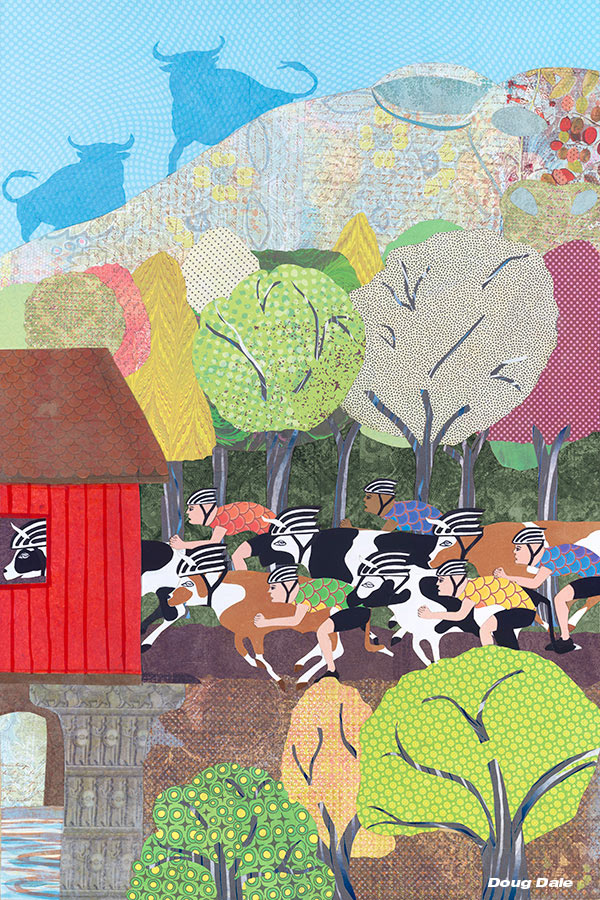 I’m by no means the only cyclist to use artistic expression as means of channeling cycling as a muse, my friend and former Century Road Club of America teammate Doug Dale, a 13 time Connecticut state champion with 40 years experience as a racer fits the example. As momentum defines our lives, Doug very nearly lost his life in a crash at Battenkill in 2011. He struggled with internal injuries and 20 + broken bones. During his long but successful recovery he adjusted his passion for racing to his life-long interest in art. In a future Pez article I intend to feature Doug’s graphic work in detail. Another of my CRC of A teammates, Dave Chauner is a great example of cyclist turned creative thinker with his page turning novel about the Tour de France. You can read my review of High Road here.

As a western history buff I had to attend the “Trail’s End” western celebration and sculpture dedication in Sedalia, MO (The Katy Trail cattle drive ended in Sedalia) where I met world renown sculptor J. Michael Wilson who, I was happy to learn, is a cyclist and shared with me his perspective on artists and athletes:

“Life as a part-time athlete and a full-time artist is what fuels my soul. I do both so I can do both! Balance is key in having a well rounded life. Thirty-five years ago it was all about the center podium or a priceless masterpiece in the Louvre. Now, it’s really about knowing who you are, have you fought a good fight, run a good race, is it the journey or destination? Your body is that raw piece of marble, you can vision the potential within. With belief, you run the course through your head, training has begun, endless hours of persistence and determination, and the creation begins to emerge. The Cyclist working his legs, arms, and bike, while the Sculptor works his hands and clay, stone and chisel. Trials and setbacks, some performances better than others, but you keep going because the fire keeps going. You push your limits because you aim for an incredible finish. Is there anything more priceless than that?” 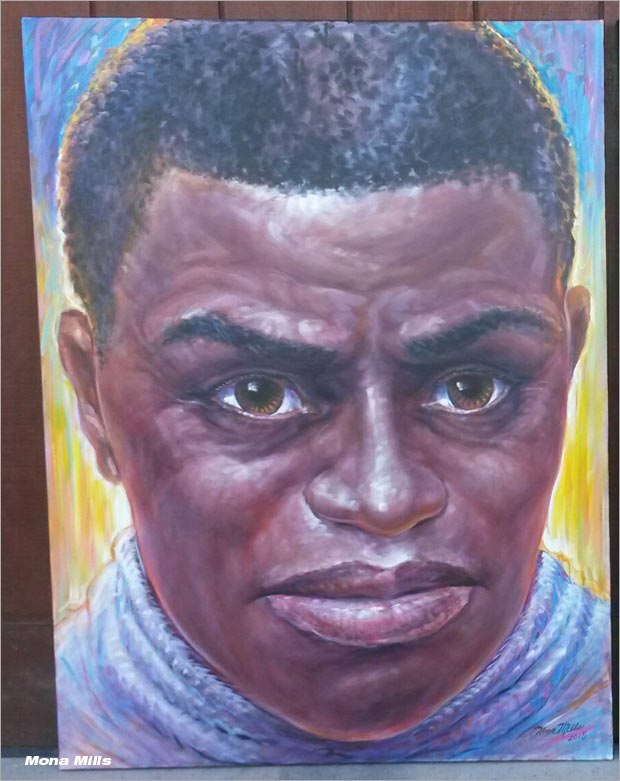 Major Taylor by Mona Mills. Portraits of the legendary black sprinter c. 1900 aged in his twenties. Taylor rolled with the highs–winning a US and world championship–and the lows, of endured racism from fellow riders, officials, hotel and restaurant owners and even race fans.

My friend Mona Mills has spent her entire life pursuing a successful professional career as an artist, and although Mona and I ride horses instead of bikes, she still spends time in the saddle and like the rest of us finds the experience essential in guiding her work. A while back on a ride I asked her “Mona, how do you know when you have a successful creation?” Her response followed in an email and compelled me to chime in on her view of artistic success from a cyclist’s perspective.

Mona Mills: The work is original, one of a kind.

John Howard: Likewise, who could ever forget the originality of the first ride that defined us as serious cyclists, how it taunted our conscience and brought us back to the saddle again and again. A positive addiction? I think so!

MM: The work can stand, without excuses or explanations. The creator no longer feels compelled to interfere. The work can speak itself.

JH: Through the medium of electronic expression we have the ability to let our epic rides speak to the world, express it to only a few fellow training partners, or personalize the experience for the pure joy of knowing that the effort went deep.

MM: The work can be viewed, read, thought about, or remembered with pleasure–without regret, without irritation, pain, or anxiety.

JH: The rise above the trivialities of anxiety, pain, irritation and regret are the hallmark of a successful ride and one of the strongest reasons for being a creative and therapeutic cyclist. 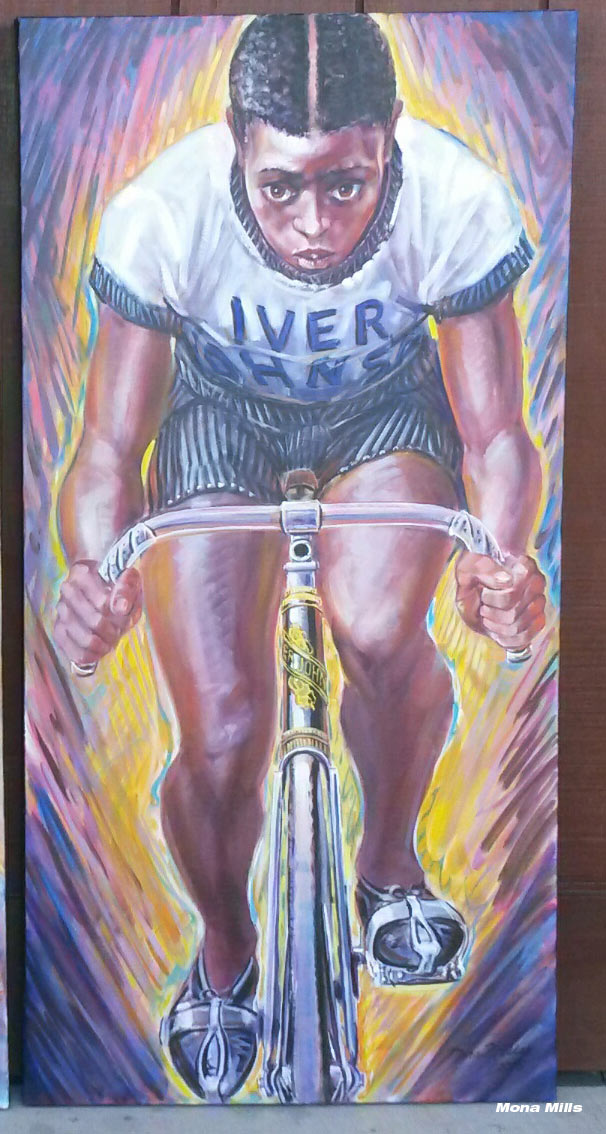 MM: The work is “Magnetic.” It calls the creator, the viewer, the reader, the thinker, the participant to return again and again.

JH: And so it is with cycling, a historic happy trail of kinetic redundancy that re-kindles the magnetic love of our “Cino bred iron mistresses.” The magic comes when the same magnetic attracting poles persist even as our steeds turn to carbon.

MM: The work feels like a freely given gift of great value, and it seems to find a comfortable place in the scheme of things. It offers a welcome feeling of being “a good deed.”

JH: As a cyclist and re-connected artist, Mona’s final point sticks like glue to my conscience. I frequently meet cyclists and triathletes who credit my example with kick starting the racing seed. The value of any artistic pursuit is the comfort zone we find on our bikes that inspires a divine expression of a perfect day as a work of art. Maybe a quiet country road at dawn, the adventure of trying to outrun a mid-western thunderstorm, the smell of foliage when the sun comes out after a rain, the pure tired joy of finishing a first, or maybe a last century.

So, the message here is two fold, first, for an athlete/cyclist looking for success, consider the full field of possibility for self-expression and avoid the pitfalls of redundant activity and the advisors who operate–sometimes with blinders intact–in small boxes. For those among us who have been there and back, consider applying the wealth that you have gained from the physicality to channel a creative outlet that expresses more of what we all need, soul.

• Mona Mills is a life long artist, and her work has always been in great demand, especially on the West Coast. Soon she will be fully up to speed with a web presence. Email her at [email protected]

“Shoulder to Shoulder: Bicycle Racing in the Age of Anquetil” Book Review