TOC Roadside: Greetings, PEZ-Fans, from Sacramento, state capital of California, and site of the prologue for the 2009 Amgen Tour of California! We’ve got boots on the ground to bring you the best coverage off-the-beaten-path. Today we talked with George, Thor, Master Phil and many more. Read on!

We’re very lucky to be here after some vehicular troubles damn near killed us on the way down from Oregon. Once over the Siskiyou pass we thought we were home free, but Old Blue decided to jettison a tie rod, and our trip required some thinking to get done. Thankfully there are good folks like those and Bill Lowe’s Tire Repair in Woodland, CA, who are honest and true. I’d be an ass not to mention these lifesavers. Thanks, guys, for everything. We finally managed to get downtown after a tow, and we immediately went about grabbing some shut eye to be ready for this morning’s to do. 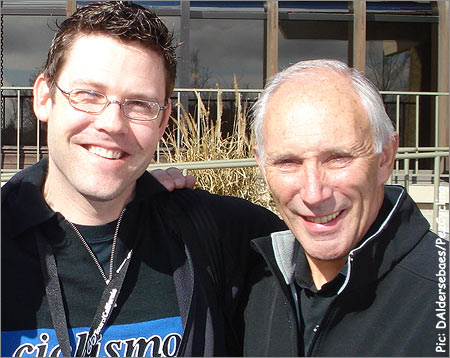 What race coverage would be complete without a few words from the ‘voice of cycling himself’ – Mr. Phil Liggett.

The night delivered a metric ton of rain on the area, but this morning’s happenings at the race hotel were bathed in full, albeit somewhat crisp sunshine. Teams and journos milled about and angled for stories. Ivan Basso preened for a commercial out back. The Cervelo Test Team boys shot the breeze about cleats. The Colavita – Sutter Home boys readied for a ride, replete with rain jackets and all flesh covered. The Rock Racing guys strolled around the lobby sipping coffee, with Tyler Hamilton asking directions. The High Road team and crew set about prepping for their press conference. Lots of press folks caught up with old acquaintances, and the whole thing was set against the backdrop of tens of different languages chattering away to each other and into mobile phones. The folks at Skype have got to have their hands full. 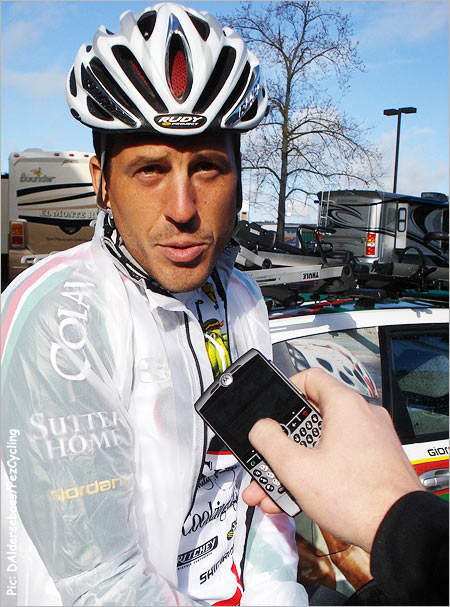 I made my rounds, starting with the boys from Colavita-Sutter home, with a quick chat with Ed Beamon and Aaron Olson. When asked how he thought the team felt, Beamon said, “We’re excited to be here, after getting back from Argentina where we had a good race we’re all happy to be at the Tour of California.” Then I had a quick word with Aaron Olson who, back with the team after plying the trade on other squads for a few years, offered when asked of his plans for the week ahead, “I’d like to maybe get a little more aggressive and make a break or two. I missed all the big breaks last year, so I hope to find my way into one.” From one Oregonian to another, good luck Aaron. Look for Pez to get a ride in the Colavita car for one of their riders in tomorrow’s prologue. 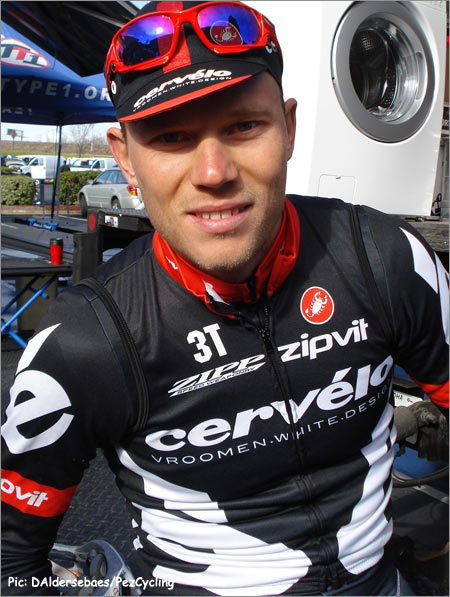 Mighty Thor may enjoy the thunderous days ahead.

A short walk past the set of what seemed to be a Cannondale commercial featuring Ivan Basso being filmed, I found Thor Hushovd putting on his cycling shoes for a quick spin with the team. He, like the rest of us, was hoping the weather would improve as it was a bit chilly and the ground still showed signs of the beating the rain gave it last night. I asked Thor if he thought this tour was a little too easy, as the rumor mill seems to be purporting. “Well, it gets a little harder around day 3 or 4, and if the weather gets bad, it could go any direction.” And any thoughts of getting that first Sprint Jersey come Sunday afternoon? “It all depends on how my prologue goes, then we’ll see. It might take a few days to get started, but we have a really strong team here. But the jersey would be nice!” Yes, Thor, I bet it would.

Then it was time to pop into the Columbia/High Road press conference, where myself and Pez Photog Darrell Parks were gifted with a nice bags of schwag courtesy of the fine folks at Columbia. We chatted briefly with Bob Stapleton about bringing some of his riders to Portland for some Cyclocross at the end of the season and a sponsor ride (Columbia is based in Portland, OR) the idea of which he liked, then we wolfed down some coffee and biscuits before the show. After a short slideshow, the team was presented by Bob Stapleton and Rolf Aldag, with both the men’s and the women’s team in attendance. 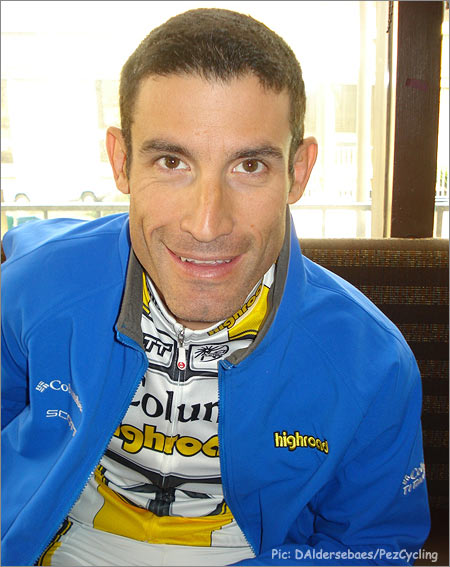 Afterwards, we caught Big George Hincapie for a quick chat. I asked him if there was any extra pressure being on an American team in the biggest race in America. “Maybe there’s a little more pressure on me than I’d like since it’s only February, but the team is very motivated and we have a lot of guys capable of a lot of things.” Any chance of trying to get into another break like last year? “They probably won’t let me go right away, but if conditions are right later on, I’ll try.” And the immortal question, how’s the form, George? “Good.” Ah yes, stoicism at its finest.

The mood around here is one of unabashed excitement. Posters for the Tour hang in every shop window and street crews have begun laying out the areas to be closed off to traffic for tomorrow. Sacramento is all kinds of busy getting prepared for the Tour’s arrival. All sorts of luminaries are moseying around, including the “voice of cycling” Phil Liggett with the erstwhile Paul Sherwen and Craig Hummer of the Versus crew. Phil saw my “Ciclismo Pez” trainer and immediately inquired as to where the Pez himself was. “He’s waiting for the better weather before he shows up, Phil.” To which he responded “Ah yes, quite right.” Then Paul Sherwen tried to convince me of Craig Hummer’s fame before piling into a minivan and driving off. Lots of laughs with those boys, as always.

We’ll be at a few more events throughout the day, and then of course we’ll be all over the prologue tomorrow, so keep checking back with PezCycling for more. Want to ride? Want to show me something unique around here? Am I missing something? Send me a note at [email protected] and let’s go!

PEZ Previews: Stage 1 Of The Tour Of California!