Baby PEZ: From TT To Sprint!

October 9th is a big day around PEZ HQ, as I celebrate the birth of my 2nd daughter Loredana. She turned four today, and after a somewhat shy start to her day (“I don’t want to have a birfday today…”), she warmed up to enjoy the fun. I took a look back at the story I wrote the day she was born – and am guessing that except for the details, my experience wasn’t too different from a lot of PEZFans out there…

– October 9, 2009 –
Friday morning was a big day at PEZ HQ. Mrs. Pez delivered our second child – a beautiful daughter. But like all things PEZ, this was a little different. I wheeled us into the hospital at 8:10AM, and by 8:25 she was in our arms. A sprinter if ever there was one…

Baby #2 was officially due October 25th, but we got an early call to the starthouse, and little did I know how quickly the next few hours would pass. When Mrs. Pez nudged me at 4 AM and said the contractions are getting stronger, I didn’t think it was anything more concerning than what I’d become somewhat used to. 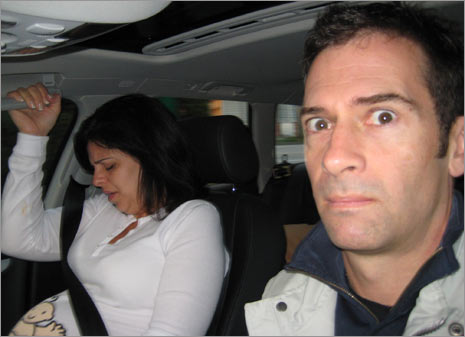 Pain and terror – together in one photo.

I rolled over and tried to go back to sleep, but after a call to her doc, we decided to head to the delivery room around 800AM to get settled in, so I figured maybe now was a good time to pack that overnight bag and grab a shower.

We were out the door by 7:30, and the sun was dawning with the promise of a spectacular day ahead. The contractions were more serious now, so my roll switched over to team DS, as we set out on what was fast becoming the TT of our lives. 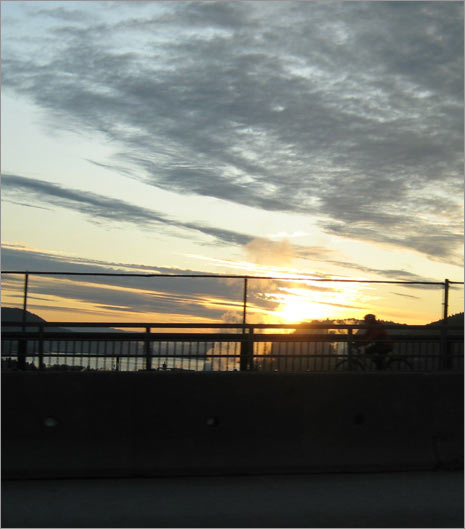 “Drive as fast as possible, but safely – we gotta get there in one piece.” I slipped into the zone, as Mrs. Pez winced in pain and clutched the passenger handle.

I expected a long wait once we arrived at the hospital, so a coffee seemed like a logical call. The contractions subsided so I peeled into the Starbucks for a double latte and a smoothie. Admittedly, this was maybe not the best call, as Mrs. Pez was in the throws of another torturous bout upon my return to the car.

Although we didn’t know the full corsa for this TT, we did know we were in for a series of short but increasingly intense efforts before the all or nothing finale. For sure nothing would be left in the tank when we were done. (No pun intended.)

In the space of 10 minutes since we left home the intensity had ramped up, to the point where I just switched off the morning radio – there was enough noise in the car already.

While Mrs. Pez continued her efforts – now reminding me every 30 seconds to time the intervals – I focused on piloting us all through rush hour traffic.

I was third man through the yellow as we turned the corner off 2nd Ave onto Main Street enroute to BC Womens’ Hospital, and given the yelps coming from the passenger seat, there was no time to lose. 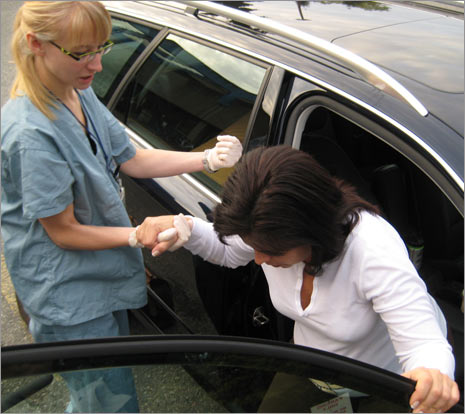 Here things really began to change. Confronted with the complete and utter agony of my beloved wife, I could offer absolutely no respite and almost as much comfort. Better just drive. Good thing I’m hard-wired for tasks.

I sharpened my focus to block out the screams to better dip and dive through the meandering work bound masses. Ahead it was wall to wall cars, red lights, and complete standstill.

Somehow I maintained my composure and wheeled us into the hospital parking lot at 8:10AM, but we were in trouble – Mrs. Pez could not get out of the car. Too much pain. Then another contraction hit and I left her wailing as I sprinted into the waiting room.

One of the nurses immediately sensed my heightened concern and immediately called for back up and grabbed a wheel chair. I felt a tiny sense of relief – we’d made it.

Then she mentioned she wanted to make sure we weren’t having the baby in the car… So much for that sense of relief.

The realization that I was no different from millions of dads before (ie: no idea what I’m doing and shitting my pants) was of little comfort.

I still didn’t realize it, but we’d hit the final stretch and Mrs. Pez would soon be throwing her all into these final efforts. She was rushed into a bed and by the time I’d finished signing her in, she was on a gurney enroute to the delivery room.

Gee, this is sure happening fast… 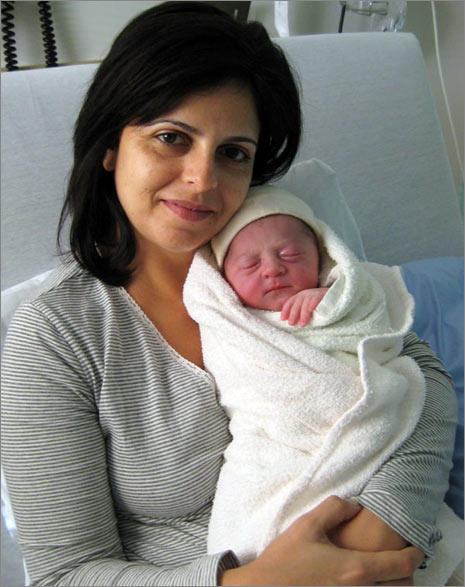 A bunch of nurses rushed into the room and machines were switched on and shuffled around, while I pinballed around the room trying to stay out of the way and out of trouble.

Her screams filled the room – and louder than I’d ever imagined. A nurse yelled at me: “THIS IS COMPLETELY NORMAL!”

I found my place at her side, pretty much speechless as I’d now been swept up by the intensity of the impending birth of my next daughter, and the utter helplessness of seeing my wife in a pain I could never imagine and do even less about. I opened my mouth to offer a few words of encouragement, but could only sputter some inaudible grunt.

Mrs. Pez was squeezing the blood out of my left hand, and had reached across to grab my collar. Her sheer strength was unlike I’d ever seen as she pulled me almost off my feet and close to her face…

We’d talked about this many times… there was no way she was going through labor without as much pain-killing assistance as she could find. She was a wimp and not afraid to say it. The only thing that scared her was the pain she’d never experienced… until now.

The only problem now, was that we were so far along that the only pain killer she’d get was some gas from a tube.

Another gigantic push and the rest of our new girl followed. I waited those excruciating seconds before she made her first sound – a small cry followed by a few more. She looked okay and seemed pretty content with the whole thing – not much to fuss about here.

She was wrapped in a blanket and laid into mommy’s arms – and promptly drifted off to sleep.

The nurse announced it was 8:25 AM, Friday October 9th. 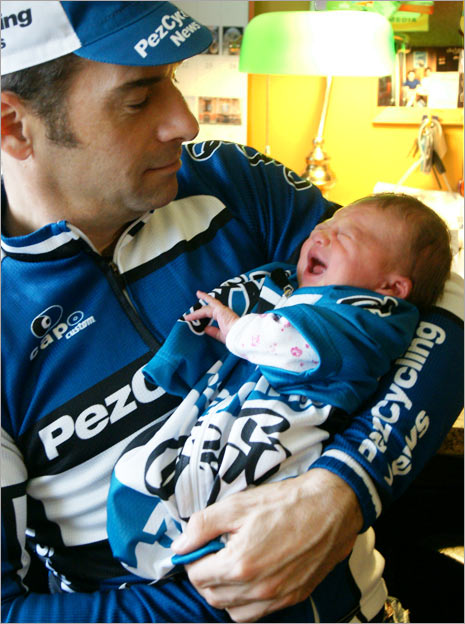 I had no idea that this most important moment of life would pass so quickly, but I’m also relieved that it did. After about 13 months of being pregnant (including one almost-baby), I’m really looking forward to getting the not-pregnant Mrs. Pez back, and finally enjoying a negroni with her. I’m also thrilled that our hopes for two healthy children have been realized, and very much looking forward to raising a family and getting to know our new daughter.

Thanks to my beautiful wife Teresa, and to everyone who was kind enough to send in words of congratulations. – Richard.