Five days of food, fog, fun, and bike racing have come to an end, as I write this on the plane back to Vancouver. That was my first San Francisco Grand Prix, and even Mrs. Pez (who witnessed her first big-time bike race) was already planning next year’s trip. Here are some high points…and the pics to prove it! 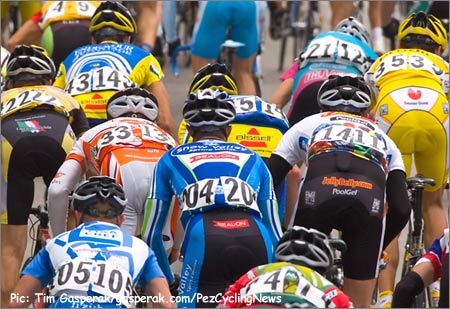 After a summer of much travel, I knew it would be tricky convincing Mrs. Pez to send me off to yet another bike race. How convenient for me – that our wedding anniversary falls on September 6 – and what better way to celebrate than a trip to romantic San Francisco? Oh Honey – did I mention there’s a neat bike race going on there as well? 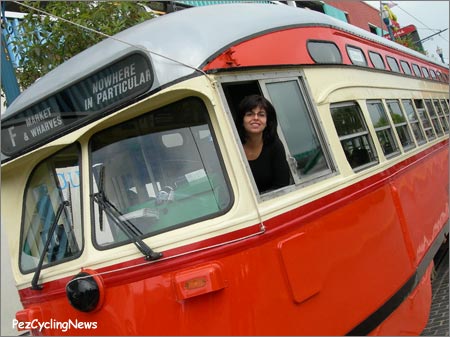 Mrs. Pez enjoyed her first big-time bike race – and even suggested we come back next year. Score!

Our five days were full of highlights, (like any race) but the presence of big time Euro-stars like Ivan Basso, the crop of top American Euro-racers, and the best of the US national peloton all racing together set this up as the best field this race has seen. 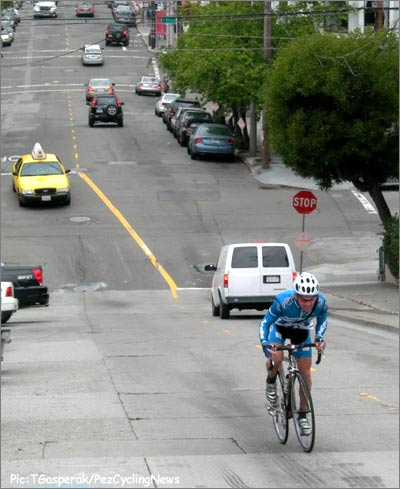 On Friday I had a close-up look at the course. That climb over Fillmore is damn steep and something I’m glad I watched instead of raced.

These days were overshadowed by the horrific tragedy from Hurricane Katrina, and every time we looked at tv or newspapers, the gruesome images of peoples’ lives destroyed made our interest in bike racing seem so misplaced and insignificant. I think everyone here for the race was in some way happy we had this positive event to focus on. To offer your help:
RedCross.org
[Ed. Note: We originally linked to a site called KatrinaHelp.com, until we saw the New York Times reported this site is a SCAM.] 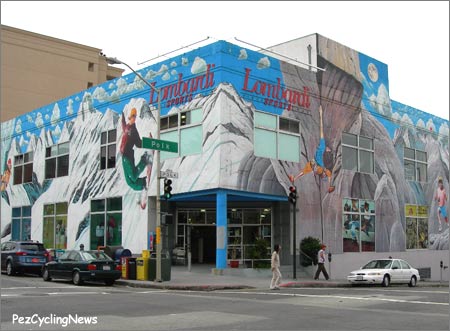 • Many thanks to the guys at Lombardi Sports who graciously loaned me a Trek Madone 5.2 to ride this weekend. Their shop is one of the biggest and most complete hi-end sporting goods retailers I’ve seen and although they staff expertise in a bunch of outdoor sporting activities, they’re bike dept. could be a stand-alone destination. It’s top notch. They carry some serious road & mtb brands, and are staffed by folks who are passionate about using the gear. Check ‘em out. 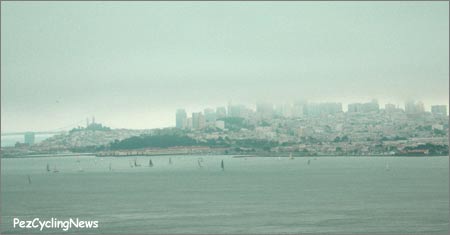 It was classic San Francisco – cooler temps made for ideal race conditions .

Riding Friday & Saturday, I remembered how chilly fog can be. One of our PEZ-Fotogs – Tim Gasperak – took me out Friday for course recon and a loop over the Golden Gate Bridge and surrounding parklands, and Saturday I joined Gary, Rob and Tyler from Upland Sports Group (importers of Bergamo clothing and DMT shoes from Italy) and was welcomed by the McGuire-Langdale team on the 3 hour Paradise Loop ride through picturesque towns of Sausalito and Tiburon. 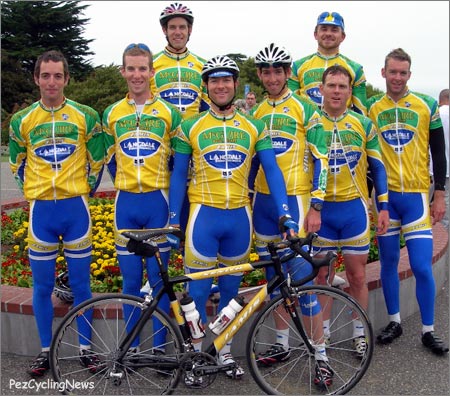 Thanks to the McGuire-Langdale team for letting me tag along on their Saturday ride.

Traffic (both pedestrian and vehicular) was heavy in most areas, so I was able to put my past experience as a bicycle courier to good use (that was a great summer job – many years ago!). I was also struck by the generally rough and often crappy conditions of the roads. Maybe my recent trip to the Giant Tour in Germany spoiled me – as the roads there were pristine – clean and billiard table smooth – but in an area as affluent as this, my bike handling skills were put to the test dodging the endless barrage of cracked pavement, shifted concrete slabs, potholes, and traffic lights that are timed to go red at every block. I guess the city council doesn’t ride bikes. Even with a race this big in town, I saw no evidence of road-work like we see in Europe. Anyway – it sure added creds to the moniker of “America’s toughest bike race.” 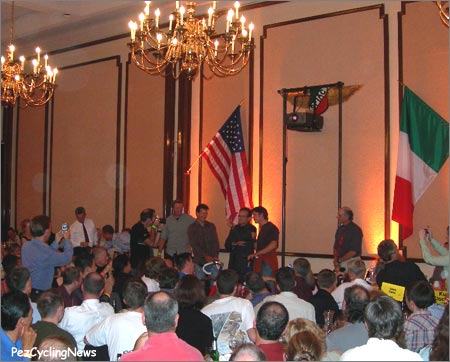 The fundraising dinner for the Davis Phinney Foundation on Friday night got an expected boost when Robin Williams dropped in to auction off a bike.

Our hotel – the Hyatt Fisherman’s Wharf – was also headquarters to the race organization, and several teams were booked in – including Discovery Channel, CSC, Saunier Duval-Prodir, Lampre, Health Net, Symmetrics, SeaSilver. Every trip through the lobby was a who’s who of top racers. I especially enjoyed pointing out to Mrs. Pez that seated right next to us at breakfast was former Tour-winner Bjarne Riis (who still claims he’s never checked out PEZCycling…) and there’s Dave Zabriskie…!

The Davis Phinney Fundraising Dinner
Friday night we joined the sold out crowd at the fundraising dinner for the Davis Phinney Foundation to find a cure for Parkinsons disease. Organized by Scott Coady (The Tour Baby! Film maker) and Fizik saddles, the big surprise of the evening was the appearance of Robin Williams to auction off a bike he donated to the cause (it went for $4500!). 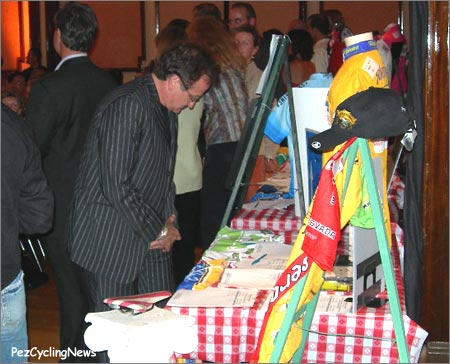 It was cool to see Robin Williams bidding on a few of the silent auction items for himself.

The evening also featured a roast of Davis Phinney by some very famous names in cycling like Ron Kiefel, Michael Aisner, Kurt Stockton, and Boll Roll. But the most moving moment was delivered by Phinney himself, who’s struggling against Parkinson’s disease. 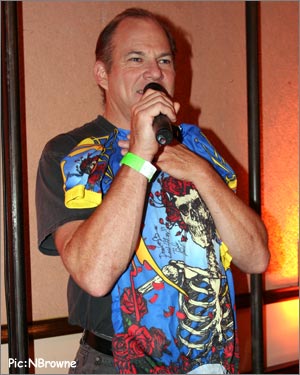 A short film that showcased Phinney’s amazing career as the winningest rider in America, and his ongoing fight to raise funds for a Parkinson’s cure, was sobering as we saw the dramatic changes in Davis as he fights the disease. Gone is his muscular torso that won big races at le Tour and Coors Classics, and although the fire in his eyes still burns, his shaking body and slow speech are testament to the ravages of Parkinsons. I’m sure many bids for the silent auction items were increased in the minutes after Davis left the stage. As I listened to the stories told, I was reminded of the rich history of this sport, and felt honored to be a part of the evening, and to have the chance to meet Davis, who accomplished so much as a racer, and now fights to accomplish even more for Parkinsons research. You can get more info and make a donation to this worthy cause at his website:
DavisPhinneyFoundation.com

Davis Phinney addresses the sold-out crowd at his fundraising dinner.

The Main Event
The weekend’s main event though was Sunday’s race – recently renamed after Barclays Global investors Group stepped up to take over title sponsorship. I was out the door at 7:30AM – leaving Mrs. Pez gently sawing logs – another apparent side effect of pregnancy. The hotel lobby and entrance drive were abuzz with activity as riders fueled up (“Yo mr. Pez!” from the table of Discovery Channel’s Mike Creed and Antonio Cruz), mechanics readied team cars, and directeurs made sure no one slept in. 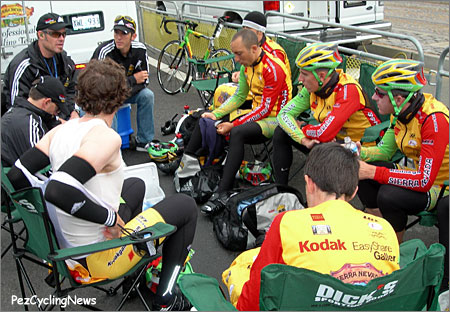 The Sierra Nevada boys talking race strategy before sign on.

By 8:45 the start area at the race was alive as most teams had arrived and were suiting up and running through race strategies. 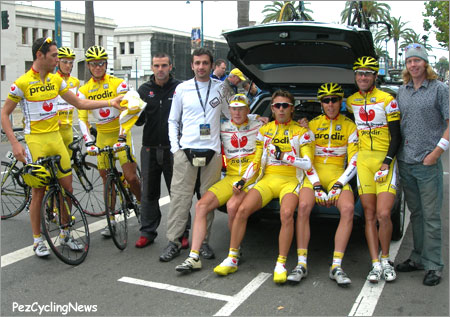 I got called into action to snap a team portrait for the Saunier Duval-Prodir guys. 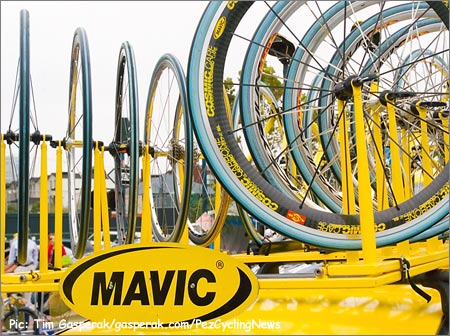 The Mavic crew was there in full force with wheels for all! 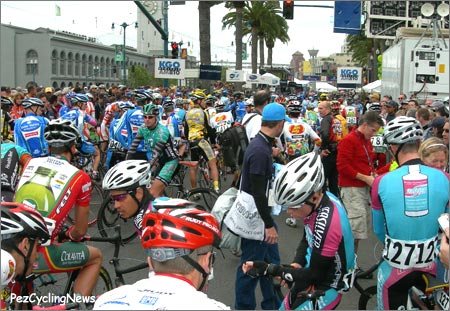 Minutes before the start – ready to go racing. 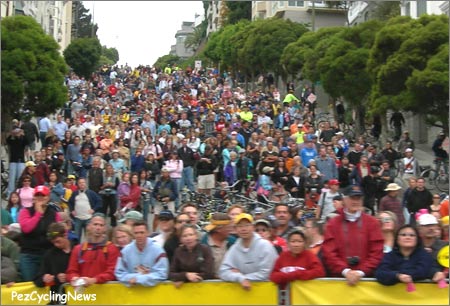 • The most popular viewing sports were the two hills – along Fillmore & Taylor Streets. The crowds were several fans-deep beside the climbs, and covered a full city block at the top of Taylor. 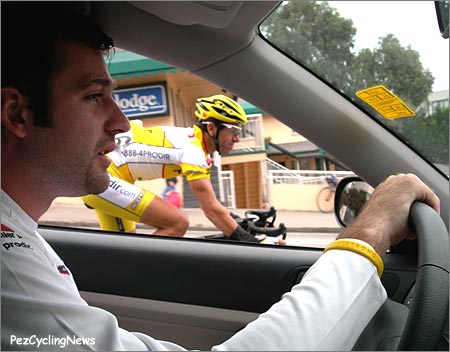 • I joined Saunier Duval-Prodir’s ds Matteo Algieri and mechanic Mauro for a couple of hot laps during the race. This is full-on rally driving my friends! Teams would pull over at the start of each lap to pick-up/drop-off media and vips, then burn major rubber to regain their slot in the team car procession. We were number 7, and no sooner was I slamming the passenger door shut, than Matteo was peeling out and passing cars down the long straight adjacent to the start/finish. I reached for the seatbelt, only to find it was already clicked-in behind me. Okay – I’ll just hang on and hope for the best. Watching the team drivers negotiate their way through the procession was a thing of beauty – and I soon realized I was part of an instinctually choreographed ballet being danced by the primo-ballerinos. As we crested one hill just before the right-hand sweeper back onto Columbus, our car got close to airborne. Matteo – who was pretty silent for most of our ride (listening intently to race radio and then cursing intently at the lack of info being provided) finally spoke: “Starsky and Hutch!” was all he said. 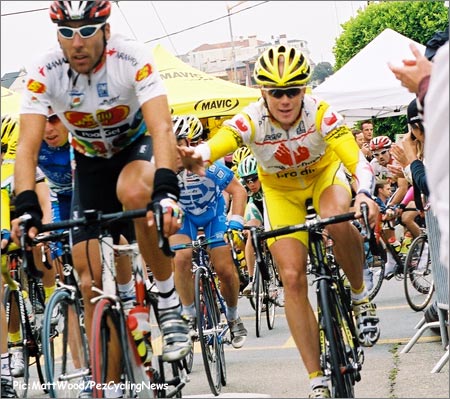 • “Pardon Me! Comin through!” Chris Horner needs some breathing space at the top of Taylor Street. 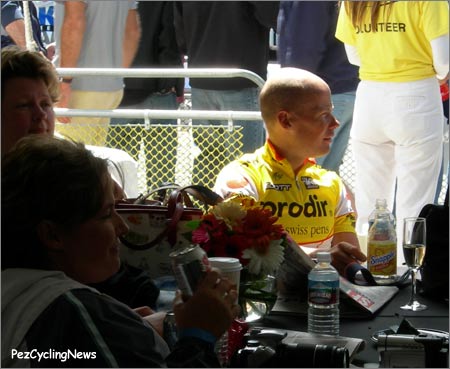 • When Chris Horner realized the break was not coming back at 7 minutes up the road, he decided the best place to see the race finish was from the vip tent. 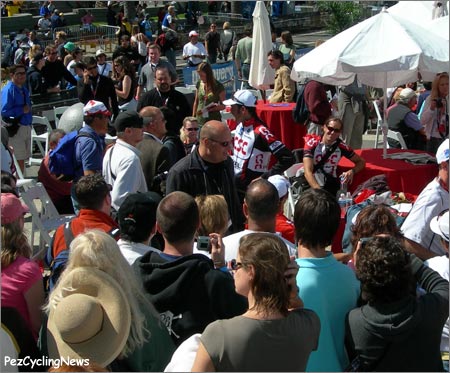 • With the race over, Bjarne, Basso, and the rest of the CSC team relax in the vip suite, while fans clamor for autographs. I introduced myself to Bjarne again this weekend (the 3rd time I’ve done this), and he still claims he’s not familiar with PezCycling. I guess he’s bombarded with endless interview requests, as mine was met with the same blank look I got last time. “Contact our press guy…” was his reply. Message to Bjarne: you will be mine. Oh yes, you will be mine! 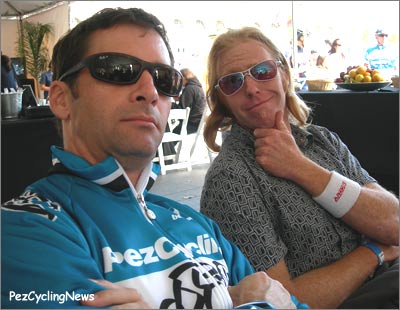 • When schlepping with the VIPs, one must carry one’s self with a certain … ‘dignity’. Scott Bicycles’ Adrian Montgomery and yours truly do our best to look the part. 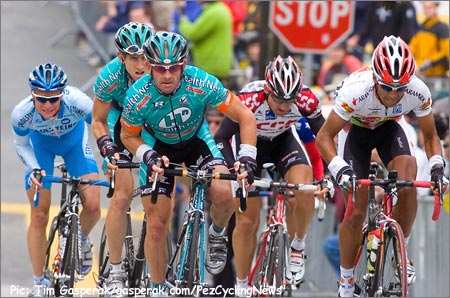 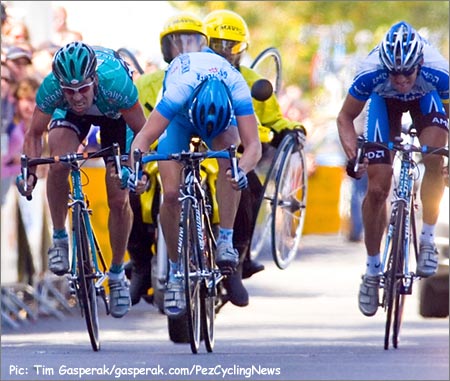 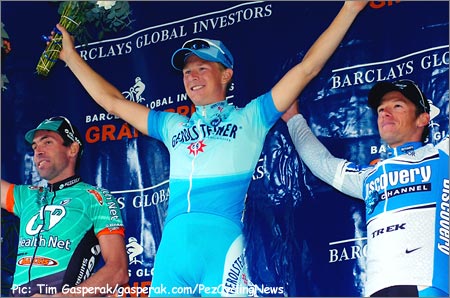 • The podium! Lieswyn, Wegmann, and McCartney.

Vuelta a Pez 3: A Bad Day In Cataluсa