Rider Blog: As the summer turns to autumn and the end of the 2017 season looms on the horizon, Chris Butler has been building towards the final Italian Classics and pizza! And as the off-season is only round the corner, our Basque resident is planning on joining the pilgrims to Santiago de Compostela. 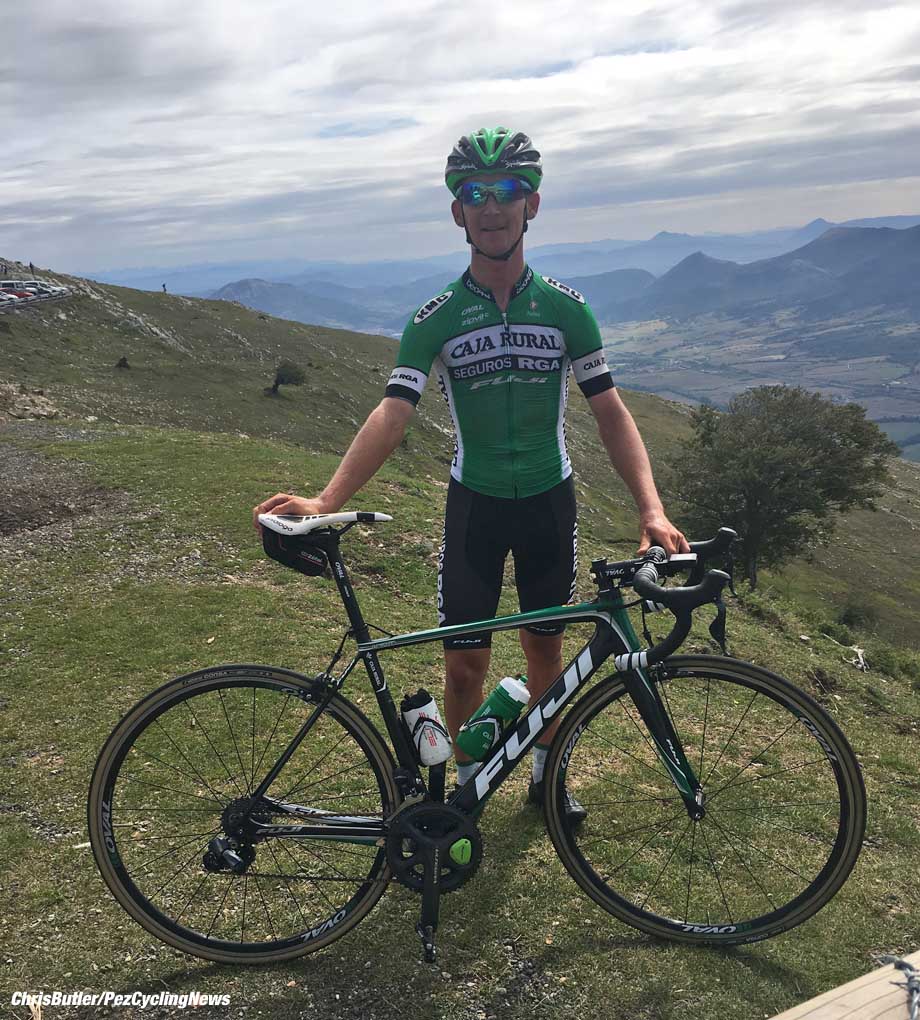 Chris in the middle of the Basque mountains

For the past few weeks I had been gearing up for the Italian classic races Agostoni and Pantani after my USA racing block. These races are a stark contrast to racing in America, and important to show the team and others that you can thrive in any type of race. Small roads, 200+ riders, a 75% or greater DNF rate, rain, and no pee breaks. Quite frequently these Italian classics will be stacked one after the other for days on end. A few years back and I noticed this and asked a veteran teammate, “How the Hell do riders go full gas in 200k classics for 3 days straight?” and he said that would be a good problem… most riders DNF and pocket 100k a day before the race stops them. Both Agostoni and Pantani are flat for the first 50k, circuits for 100k in the medium mountains then the last 50k flat. So, to win these races you have to be able to climb like god and sprint like a king. Caja Rural-Seguros RGA has numerous guys that can fit this bill, so it was my turn to help those guys. The meat of the race comes in the circuits, guys are just blown out the back and it is single file on the climbs and downhills, like a huge cyclocross effort… always being mentally switched on and dodging crashes. Both days had front groups around 40 after the circuits, we normally had 4 guys in there and from that moment I would then ride the front with another teammate to set up our Caja fast men. We had some guys in the top 10, which was solid, but we all really wanted the team victory so we could have an Italian pizza party. 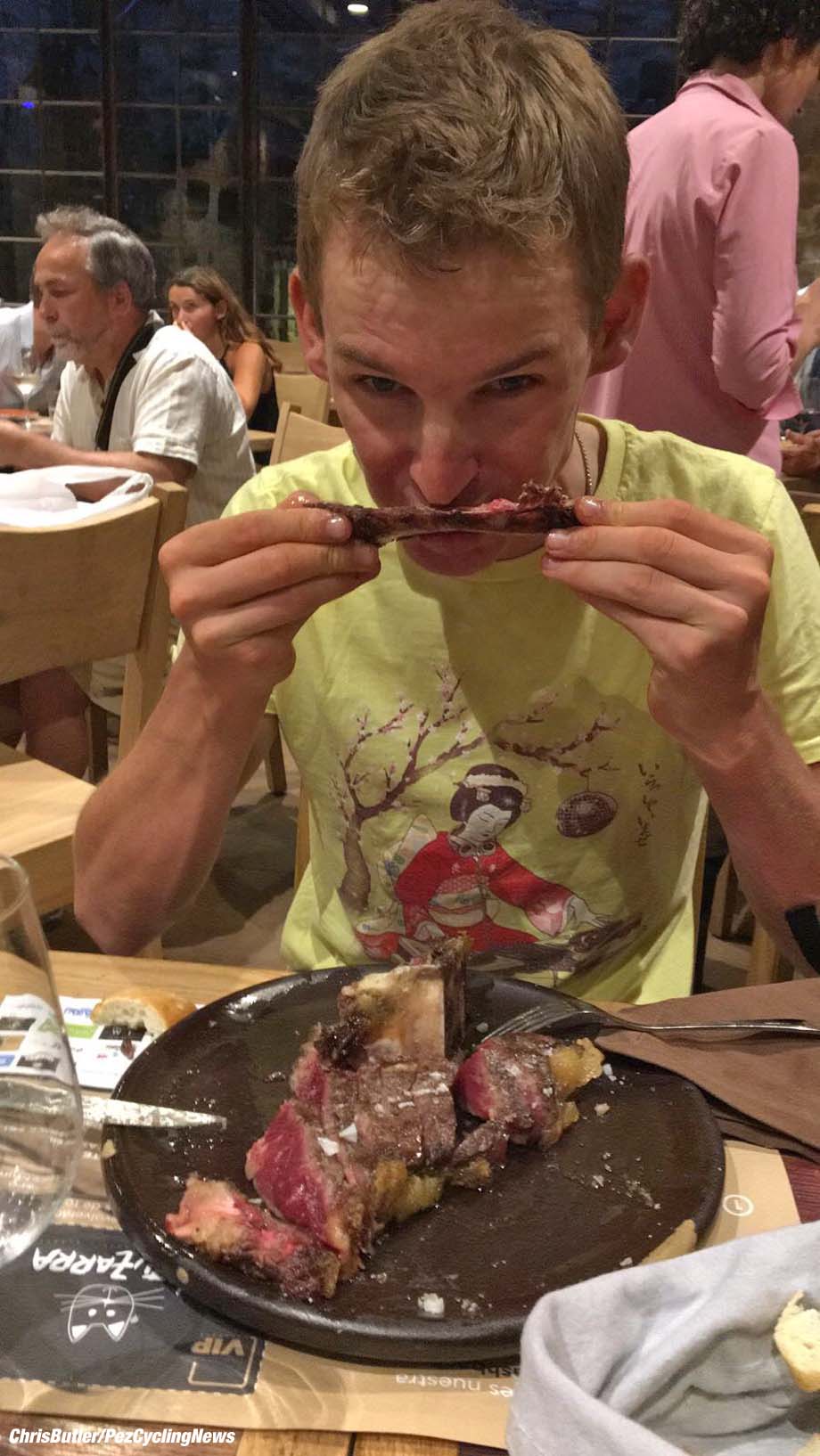 We did anyways. At this pizzeria, servers were carrying pizzas about a meter in diameter with various toppings. After a tough race and a four-hour car transfer, to say the team was a bit hungry would be an understatement. This wasn’t the servers first rodeo, they could sense predators and hear the rumbling stomachs. When the server’s pizza tray is out, they had to walk up a huge staircase to the kitchen to reload. So, it was interesting to see every servers’ chosen route zig-zagging to all the different tables but always ending on us last with 2-3 slices left. Being good teammates, we often cut them in half to give everyone a taste. How many did I eat? Everyone knows that you only count the pizza damage you have done by the left-over pieces of crust on your plate… so it looks like I was super pro and only ate one slice. 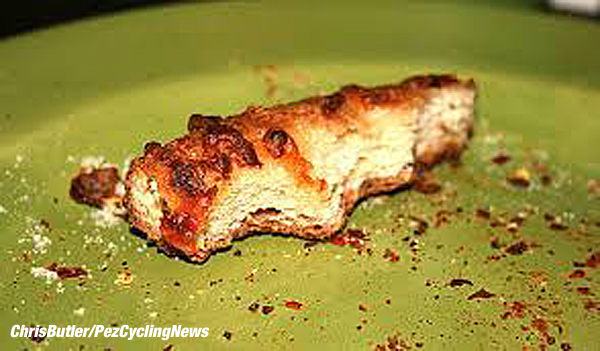 Only 1 piece of pizza?

Tourist season is in full swing here in Pamplona and the next big attraction is the pilgrimage known as Camino de Santiago. As a native of the vacation island of Hilton Head, SC, I can appreciate the boost to the economy that comes with the inconvenience to the locals. I was racing in Colorado during the most famous Pamplona event – Running of the Bulls – so I’m currently seeing the most amount of tourist in town for Camino de Santiago. It is perhaps the third most important of the pilgrimage routes, and starts from the border with France and heads to the northwestern Spanish region of Galicia, to the cathedral where Saint James’ remains are buried. Pilgrims buy a “credencial” (pilgrims passport) that allows discounted prices at a hostels, cafes and restaurants along the way. For each purchase, and at every town hall or cathedral visited, the passport is stamped to document the journey. At the end of the trip, the pilgrims go to the Pilgrims Office in Santiago where the passport is given the final stamp of “compostela” (certificate of completion). The adventure, beautiful scenery and great food make this a popular vacation for backpackers – and they are everywhere in the city. As for cyclists, the trip can be completed on mountain bikes, and that could be an offseason activity for my teammate Justin Oien and I. 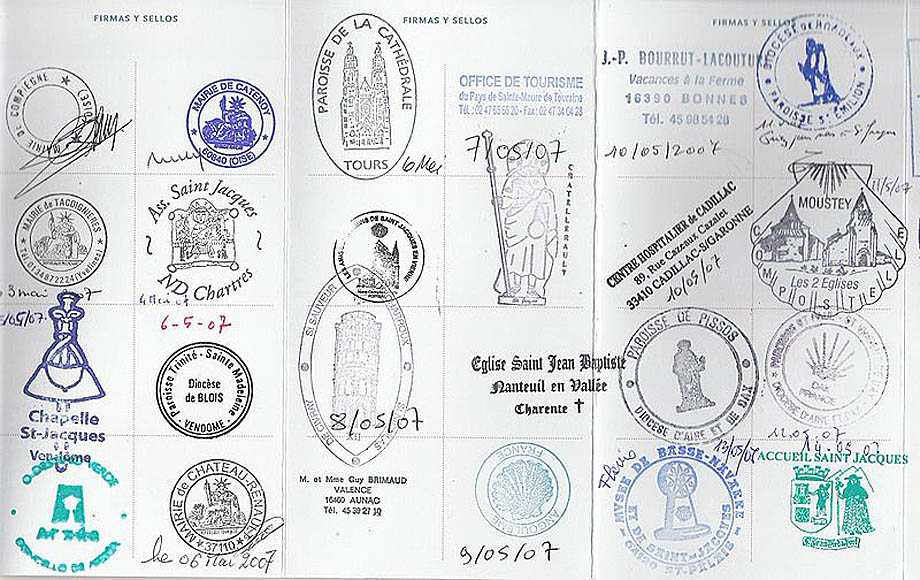 Collect the stamp to be a pilgrim 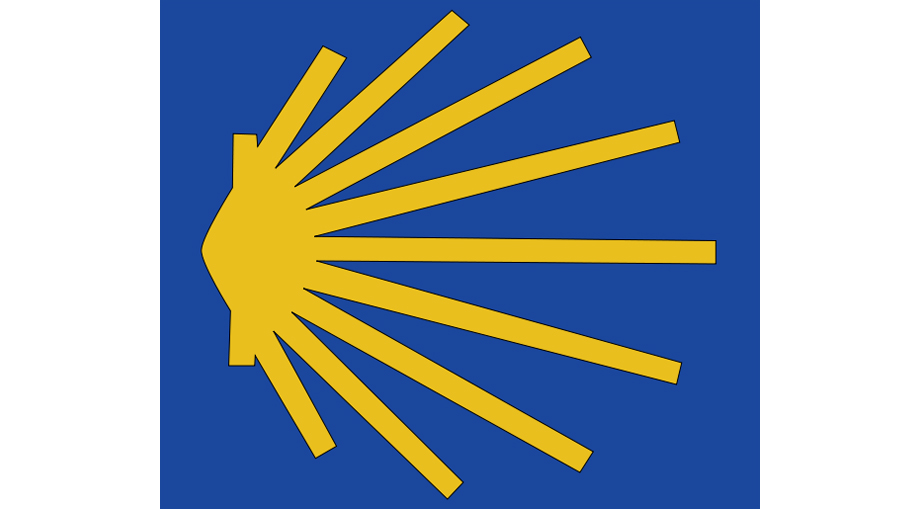 # We will be catching up with Chris throughout the season, race calendar and injury allowing, to find out all about life on Spain’s second biggest professional team. You can catch up with Chris’s first, second and third blogs. #

Is This the Coolest E-Bike Ever?