Basso Vs. Ullrich: 2 Paths To Paris

They’re the two most talked about contenders for the 2006 Maillot Jaune, but for two guys with the same goal – they’ve got two very different ways to get there. PEZ considers who’s map looks better…

With all the recent hype surrounding Tom Boonen, some prophetic racing news might have slipped under the radar – like Tour de France hopeful Alejandro Valverde losing Pais Vasco in the final stage’s 24km TT (and then pulling the Daily Double in the Ardennes). But who could have missed Ivan Basso finishing just off the podium in the Circuit de la Sarthe, the same race that listed Jan Ullrich as missing in action before it began? The news was not surprising – for a rider of his talent, Jan Ullrich has been MIA ever since Marco Pantani gave him a smackdown on the col de Galibier in the 1998 Tour de France. On the other hand, Ivan Basso’s fortunes have been climbing steadily as he’s gone from Tour de France 3rd in ’04, to second last year… 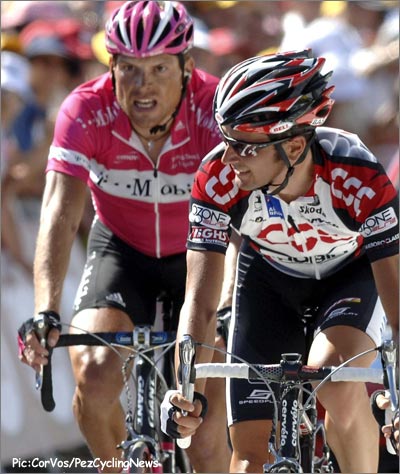 Who’ll be chasing who this July…?

Der Kaiser Gets Pou Pou’d
Tour contenders have become increasingly selective with the races they ride in their buildup to the Tour. But Ullrich has taken specialization to a whole new level. While more and more pros are using races in Australia or the USA to train in the off-season, Ullrich chooses to retreat to South Africa. Understandable?

And what about the Spring Classics – races that seem tailor made for Jan’s power and stamina? Even Lance Armstrong, the most specialized and prolific Tour winner in history put his foot down in Belgium and Holland in the springtime. Granted, Ullrich hasn’t shown himself to be one of the peloton’s best bike handlers and could rightfully fear the narrow sinewy tracks of the northern classics. But don’t all of cycling’s great champions leave a mark on these courses? 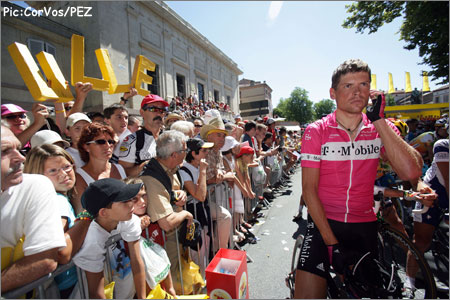 Where’s Jan Ullrich? He’ll be taking the start at the Tour de Romandie today, and all eyes will be on his form.

Ullrich’s marketing machine may have played down der Kaiser’s latest absence but it can’t re-write history. Despite world titles and victories at the Tour, Vuelta and Tour de Suisse, his career has been overshadowed, not so much by Lance Armstrong, as by an expectation that he could have done more. If Jan crumbles in the 2006 Tour de France, history may well remember him more for what he didn’t do – a modern day Raymond Poulidor.

Back At The Casa
Meanwhile, back at the casa, Ivan Basso seems to be finding the tough love style of Bjarne Riis to his liking…or at least he’s putting up with it. Already in competitive form, Basso has been showing the colours of CSC throughout the spring. And in case you hadn’t noticed, Riis is transforming Basso’s TT skills in preparation for a showdown in July. 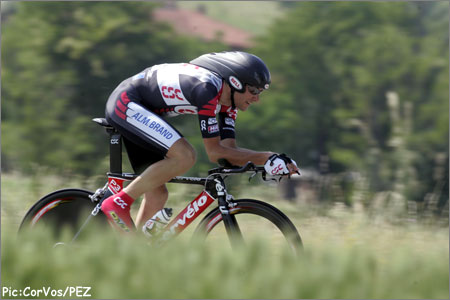 Ivan Basso has done the tough job of turning a glaring weakness into a huge strength.

While the stereotypical emotional Italian is developing a certain mental toughness, the outwardly stoic Ullrich looks to be losing his will to win. On paper Ullrich is odds on for the ‘06 Tour de France. Without a TTT to favor Basso and the CSC boys, and two ITT’s long enough to allow Ullrich to grind minutes out of his nearest GC rivals, it’s Ullrich’s race to lose. But the race won’t be fought on paper.

Head Games
While Basso has never won the Tour, as an up-and-comer he hasn’t felt the stinging indignity of defeat like Ullrich has over the years either. Ullrich will show up in Strasbourg wondering if the only time he won the Tour was an accident…and knowing that Basso beat him in the Tour in both of his last two starts won’t put him in any better frame of mind.

In 1997 team leader Bjarne Riis cracked during a stage and his young domestique Jan Ullrich was told to continue without him. Riding without any pressure, and with Riis later at his side to guide him, Ullrich managed to find his way to the top of the podium in Paris. The next year, in 1998, Ullrich showed his vulnerability. Carrying the weight of the yellow jersey, Ullrich was hesitant. Self-doubt left him unable to command the respect of the peloton. Rather than lead the race, Ullrich allowed himself to be attacked – a role he would play out in countless Tours to follow. 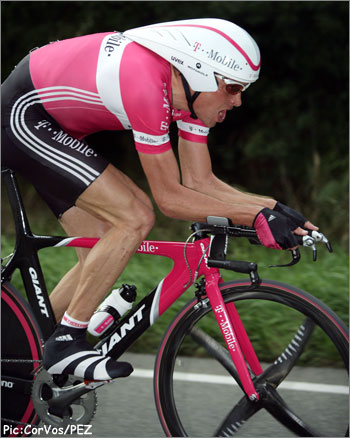 You can’t find much fault in Jan Ullrich when he steps onto a time trial bike.

What About Basso?
The leadership of Bjarne Riis guides Ivan, who For his part, has only tasted real pressure once. He was leading the 2005 Giro when he got taken down by the dreaded bad stomach on the 13th stage and was never able to recover on GC. Whether it was stress induced or because the chef left the primavera sauce in the sun too long we’ll never know. But one bad day will cost you in the Giro and the Tour de France. Basso stayed in the race going on to finish in Milan (winning two tough stages along the way) and later earned a spot on the podium of the 2005 Tour, his second in two years. But following wheels while Lance Armstrong controlled the peloton is far less pressure than he can expect the first time he wears the yellow jersey in France.

So Basso also has some work to do because, for all his foibles, Ullrich has rarely cracked at the Tour. In fact the only thing Ullrich is lacking is the will to win and the yearlong discipline that victory in this special race demands. 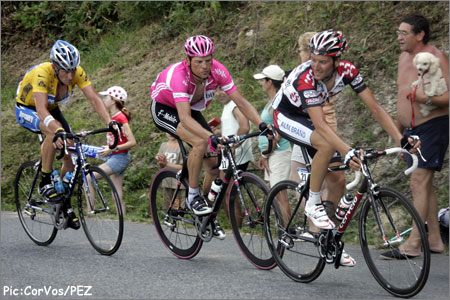 Ivan Basso leads Jan Ullrich during the 05 Tour…will Ulle be there when it counts in 06?

It’s What’s Inside That Counts
When Lance Armstrong tipped Ullrich to win the 2006 Tour I found myself wondering if Lance was trying to jinx his archrival one last time by making him the favorite before the race even began. Certainly Armstrong held Ullrich in his sway over the years in the head games that are an ever-present part of Tour success. And let’s not forget Armstrong’s implicit endorsement of Basso whom he tried to hire as a possible successor just a few years ago.

It’s hard to underestimate the amount of pressure Armstrong carried over the last 7 Tours – pressure that someone else will have to bear when the race gets underway in Strasbourg. With what is likely to be a more open and attacking style of racing this summer, the winner in 2006 could be decided as much by who can shoulder that burden as it will by physical ability alone. While Ullrich may have time to recuperate from whatever knee problems he is experiencing, it might be too late to build the mental toughness he will need to draw on in July.

While Jan’s camp must live with years of defeat, the CSC crew is enjoying the full power of momentum… and even though Jan will be the only rider in this year’s Tour who knows what it takes to win the race, his past achievements may not be enough to overcome the promise of Basso’s future.