In Part One we went over the race itself. There’s no need to go back over that, it’ll just bring back too many painful memories for me. This time, we want to see how PEZ managed to get elbow to elbow with the fit and famous in the Battenkill Pro race.

How Did PEZ Get In?
No really, how did Pez get in when all the other press agencies were writing from the sidelines? It was the deepest depths of winter, and I had been out for a few hours of base miles with some friends in the sunshine of Mooloolaba, Queensland Australia, followed by hours of pleasant coffees on the Australian beach watching the world go by. 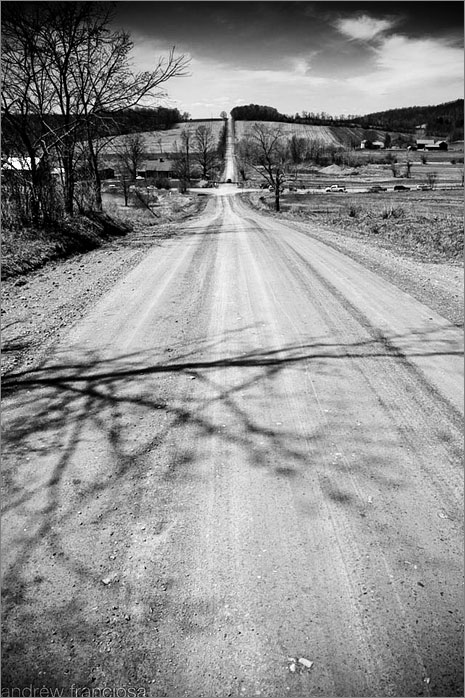 How do you get ready for a race like this?

Not your average winter sure, but when I got back home for a shower and checked my e-mail, there was a message from an old buddy of mine and my long term mentor in the USA, Chris Hayes. He said an east coast team needed a rider for the Pro event at the Tour of the Battenkill. He told me it was 200kms and on dirt. I pretty much dismissed it as not my kind of race, but went online and looked into it a little bit anyway. The more I looked into it the more I realized this was not a race for me. BUT… the April date was workable for me with regards to the rest of my season, and it is a pro race and a pretty friggin’ cool! An opportunity to race a rare Classic type race like that doesn’t come up every day, and to be a part of something like this… so I accepted!

And that was that, PEZ got to hob-nob in the dust and gravel with America’s best, actually some of the world’s best. Just like that, I had jumped in the deep end, head first, blind folded with my hands tied behind my back…what an adventure! 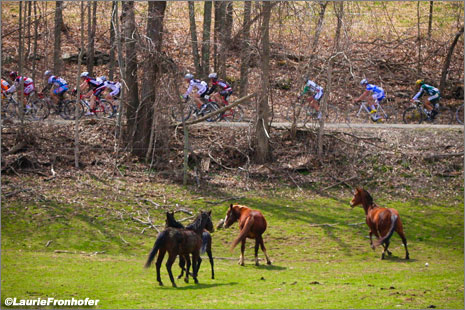 The Team
The team, called Haymarket Bicycles, is actually a shop club out of Haymarket Virginia. One of the owners and racing enthusiast Jared Nieters seems to be one of relatively few people to want to, and dare to try big things with his teams. Although they are mainly a criterium team like many others throughout the US, Jarred has the guts and the foresight to want to take his team to the next level. So he put in a lot of hard to work to put in a bid for the Tour of the Battenkill. 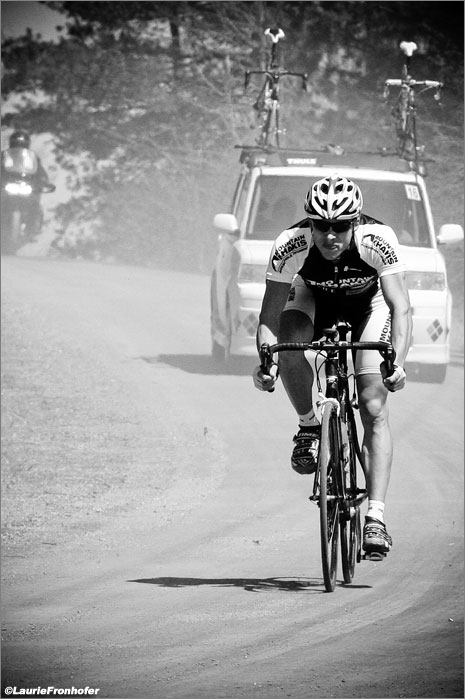 The Haymarket team car on the wheel of 2009 breakout sensation, Tom Soladay.

He then put himself a roster together and jumped in the deep end! Respect! In putting a roster together he obviously had a lot of choice. For a race of that stature people were knocking down his door. However when it came down to it he had to make choices. Jared settled on a good mix of riders. Considering the gravelly nature of the race he brought in some guys with a cyclocross background in Stephen Cummings and Jamey Driscoll. Then he stirred in some international road experience with John Delong who spent years sharpening his teeth in the US pro ranks, John Parks who had spent a couple seasons racing in France, and myself, a native of France based and racing in Europe.

Then he added a soupcon of solid and reliable local riders who have been around a long time and know the scene like the back of their hands, the end result was a pot-roast of talent. 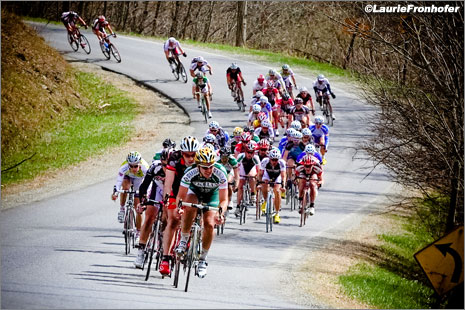 Paved or dirt, the racing is intense at the Tour of the Battenkill.

Preparing For An Event
Ok, so, this is the section where I’ll let you into all the little secrets of how I prepared (or didn’t prepare) for the big event. Hopefully this will give you some info that you can then apply to your own cycling season or goals.

1) The first thing you need to think about is, what importance does this event hold in the season for you? For me this was not an event I could take lightly. The distance, the nature of the course and the level of the teams meant that I couldn’t just show up and take it easy. However this event was also much too early in the season for me to risk putting too much into it, and it wasn’t suited to my riding style.

My main aim for the season was at the end of May and early June with some races in the hills and high mountains of France. This would therefore determine how much training and what kind of training I was going to do in preparation for the Tour of the Battenkill. Here’s what I had to consider. 1) my main aims for the season where races on long climbs, therefore short intervals, being good at sprints and on the flat wasn’t what I needed long term. The Tour of the Battenkill was a long race, so the most logical thing to work on was endurance and longer intervals. The hills at Battenkill would require some shorter and sharper intervals than I would not normally do at that time of year. So I pretty much discarded that aspect of training as I preferred to do it later in the year nearer to the events I really wanted to do well in. 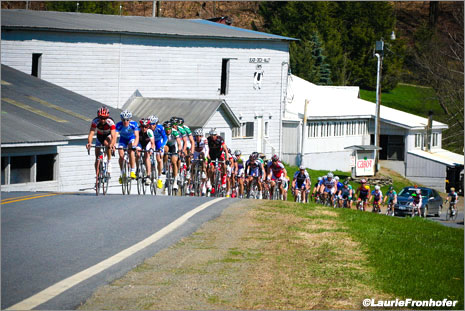 Though not mountainous by any means, the race was definitely not flat.

2) What were my chances of doing well in this race? A few things to consider here. The distance: I hadn’t raced over 180k since a UCI stage race in Africa at the end of 2007, and I hadn’t raced 200k since Austria in 2004. So the distance could be an issue. Another very important thing was the terrain. Although there were some hills, this is more of a strong-man’s race, a classic. Primarily a flat course with short and steep power climbs. I’m not very good at those, I need much longer climbs.

The style of racing also had to be taken into account. Considering I’m happier on hilly races, that means that I’m more used to riding in small groups over climbs, and consequently I’m not the best guy out there at rubbing shoulders and forcing my way through a peloton. So my chances of doing well here were fairly slim. I therefore figured it would be best to keep the main focus of my training firmly on the May-June races where I had a much better chance of doing well, rather than blowing my fitness on something I had little chance of pulling anything off in.

On Ya Bike, Mate!
In order to prepare, I needed to add some longer rides into my early season training. I therefore simply did longer base mile rides. I hooked up with some friends in Australia and we went on group rides, then extended the rides to get in some solid saddle time. I would also often go on a group ride in the morning, then meet up with a friend for a couple extra hours in the afternoon. Sadly once I got to the US in early March, the cold and snow and rain actually hindered my prep, and if my memory serves me right, I actually did very little riding in the weeks before the Tour of the Battenkill. But the majority of the training had been done weeks and months before, so it wasn’t a big deal. 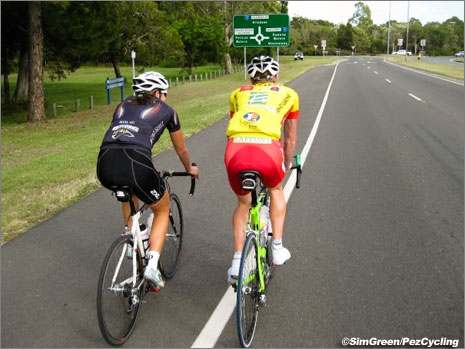 Biking is a lot more fun with friends.

The other thing I had to train for were the dirt roads. My Friend Tahlia in Australia somehow managed to find some gravel roads over there for us to ride. Though most of them were stupidly steep 6km+ climbs on gravel, I’m sure it helped. Some of the gravel roads didn’t quite work out and we ended up riding through wet muddy fields, which was pretty comical. Once in the US I was able to hit a few more gravel roads, and I even managed to crash on one stretch of gravel less than a week before the first race of the season. 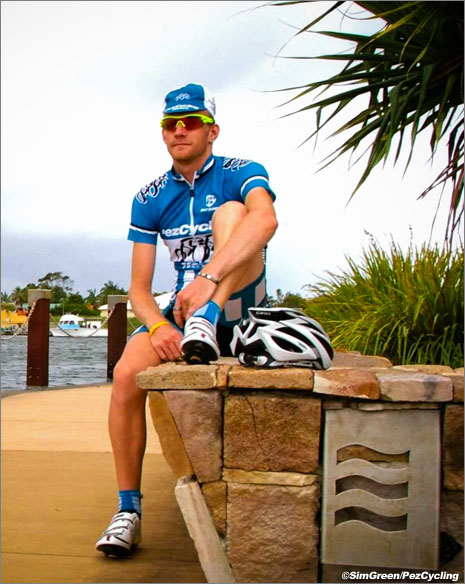 Sim waiting to do a group ride back home in Oz.

I also headed to Pennsylvania for a race that included a lot of gravel in the weeks running up to Battenkill. Though I didn’t feel strong or in control of my racing that day, I was able to persevere and come home with a 6th place. That was a pretty good sign. The winner was a Canadian Planet Energy rider also going to Battenkill, and there were a few other riders Battenkill bound there as well. So although the feeling wasn’t there in the legs yet, it at least told me I was somewhat heading in the right direction.

Test Session
Just before leaving the sunshine of Australia I started working in a few sprints and harder efforts. I ran a few power tests up a climb I like to use over there and the numbers were looking good. I was even starting to get something of a snap in my legs in the sprints. My power up the climbs was well above what I had expected for that time of year and at a relatively low heart-rate. I had managed to pack in some solid training just before flying to the northern hemisphere, in case of bad weather. 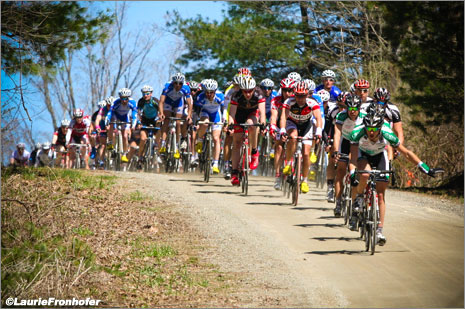 Race Miles
Last but certainly not least, I needed some race miles in my legs. This would also apply to someone preparing for a big charity ride or an amateur race or cyclosportif. Before hitting the big race, I needed some harder racing miles. So I entered some US races and made sure I had some races under my belt. Motor-pacing would also have been a good idea at this stage, however I was over in the US solo and didn’t have anyone I trusted who had the time to motor-pace me.

The principle of having some harder “race” miles in your legs is applicable across the board. If you are preparing for a big ride, it’s probably a good idea to go out there and do some group rides before hand, to force your body into adapting to the rhythm of riding that little bit harder. Same thing if you are preparing for a race, not matter what level. Either get out there and do a couple harder group rides before your race, or get some races into your legs before the race you want to be well in. 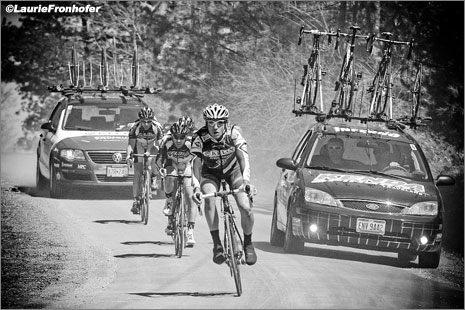 No matter how precise and perfect your training is leading up to a big race, something as unlucky as a flat tire at the wrong moment can put paid to any chances.

The Bottom Line
The bottom line is, you can’t be in the best shape of your life for everything. You have to weigh everything up and make sure you do a minimum of planning before you jump in the deep end. Make sure you prepare appropriately. Know yourself, know your abilities and your strengths and weaknesses. I’m not a big mileage person, so I never actually did really big miles. But I did do some longer rides than usual. Be reasonable with your training and expectations… but above all, have fun! 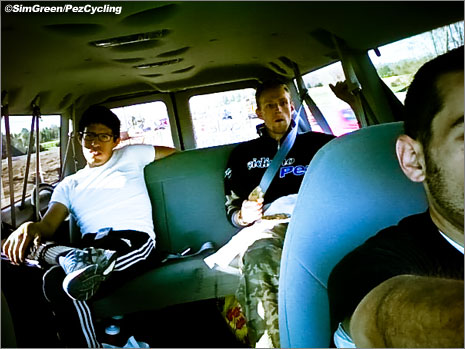 Don’t forget that other painful part: if you’re in North America, be ready for some driving.

***
Thanks for reading! You can contact Sim at [email protected]