Behind The Scene: Staging A North American Race

There’s a tremendous amount of buzz lately over the very real possibility of the Giro d’Italia coming to North America. Cycling promoters and municipal authorities in Washington, D.C., collectively known as the 2012 Giro d’Italia Working Group, are holding talks with race owners RCS Sport, hoping to bring the Grand Tour to the U.S. capital.

While much, much work remains to be done to bring the race to the States, and there’s certainly no guarantee that RCS Sport will bite, the idea got us thinking: What does it take to organize a major race in North America? The U.S. is still the most powerful economy in the world and is filled with maniacal sports fans. So why haven’t foreign racing promoters been able to gain a foothold on this continent? Even passionate cycling fans would be surprised to know how difficult it can be to create a race in this country. 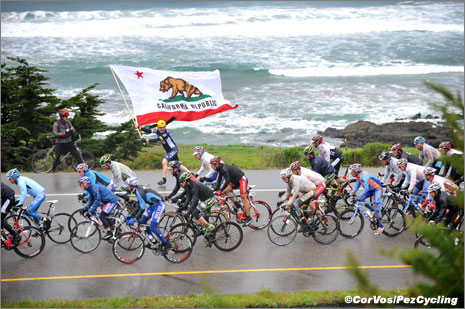 We spoke to two veteran cycling leaders about the machinations involved in organizing races. Robin Morton is CEO of g4 Productions, and is a member of the 2012 Giro d’Italia Working Group. Morton was the first woman to manage a men’s pro team and helped lead the first American squad to the Giro in 1984. She’s organized such events as the Tour of Georgia, San Francisco Grand Prix and USPRO Championships. John Eustice is president of Sparta Cycling and a two-time U.S. national champion. Eustice currently runs the Univest Grand Prix, a UCI 2.2 stage race in Pennsylvania, and has worked nine Tours de France.

Show Me The Money
One thing makes the wheels go ‘round in professional cycling, and it’s not high-zoot ceramic bearings: it’s money. That’s why most organizers look for sponsor cash before they do anything else, Morton and Eustice agree. Plans for a lung-busting parcours, gorgeous podium girls and world-class riders are all pie in the sky until the money starts coming in the door. 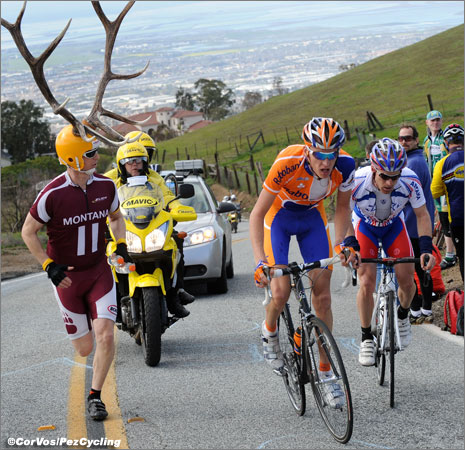 Getting the big riders to a race like California isn’t as easy as it may seem.

Some organizers prioritize the venue over the money, Morton says, but that can be a mistake. Just because a region is passionate about cycling or has great roads does not necessarily mean sponsors will pony up the funds for an event there. However, locals who are cycling friendly can offer a tremendous boost to an organizer for step two, which is finding a locale and securing the greenlight from regional officials. The idea of the Giro start in the U.S. capital city would probably be a non-starter if not for the fact that Washington, DC, Mayor Adrien Fenty is a cyclist and triathlete.

Race organizers in North America. have to work overtime to placate sometimes-skeptical local authorities and secure necessary permits. In Europe, it’s a different story. For the Tour de France, for example, hundreds of town apply each year to host a stage start or stage finish. The ones that are selected get the privilege of paying tens of thousands of dollars to race organizers. A guy like Eustice, on the other hand, must negotiate with 19 separate Pennsylvania municipalities through which his Univest Grand Prix passes. “That’s 19 different police chiefs, 19 different mayors or councils,” he says. “But I was an elected official once. I served on my town council, so I know what they want.” 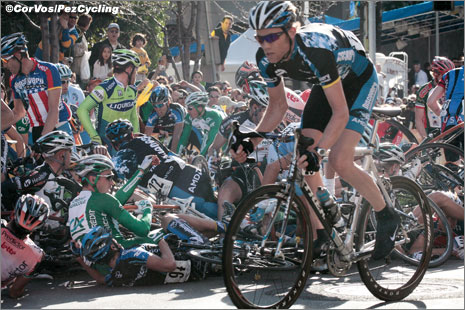 Urban circuits are thrilling and dramatic, but…

The venue must fulfill a number of requirements: 1) it must make the sponsors happy; 2) it must allow for competitive, yet safe, racing; and 3) if must be fan friendly. Once the general venue is chosen, it’s time to design the course. While most cycling fans might drool over the notion of designing their dream course for the top pros – “Let’s make them climb Heartbreak Hill four times, then sprint for the city limit sign, just like we do!” – course design is no picnic. For UCI races, the organization stipulates some very exacting guidelines for its courses that most tifosi are never aware of. For example, UCI circuit races must be run on a course at least 12 kilometers long, unless the organizer wants to apply for an exemption. That would rule out some of the most popular amateur cycling circuits in the U.S., like the Rose Bowl in Pasadena or Central Park in New York. Another example: If the organizer wants to run a time trial, they need to offer a warm-up area that’s at least 800-meters long. 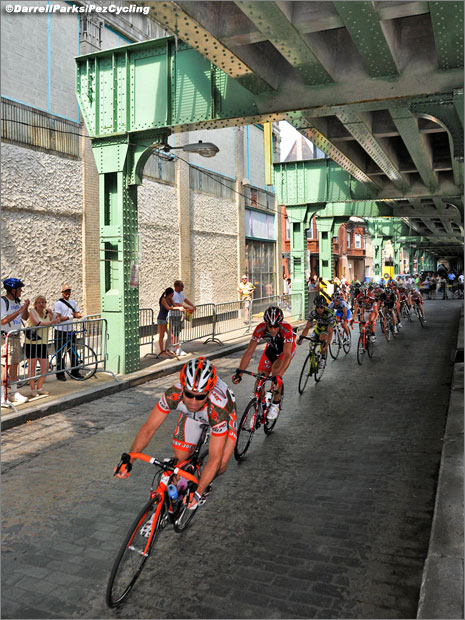 Philly’s circuit is an entertaining jaunt around one of America’s great cities.

In other words, race organizers in North America need to know every line in the UCI rule book, even if the regulations don’t apply so well to American racing. Eustice cites the UCI rule that bars a stage race organizer from using a short finishing circuit of more than five laps except during the final stage of a race. For a small stage race like Univest, this means fans in town centers are denied the chance to watch a long circuit race except on the race’s last day. (And this is also how the Tour de France gets away with running umpteen laps on the Champs-Elysees on the final stage.)

Pay For Play
While race organizers are busy securing sponsors, applying for local permits, creating media plans to keep sponsors happy and designing courses, they also have to tick another important box. Oh, yeah: the riders. To attract teams to a race, an organizer has to be one part P.T. Barnum, one part UN secretary general and one part Judge Judy. To court the highest level teams, organizers like Robin Morton travel to top events like the World Championships to press the flesh and try to secure at least handshake deals. 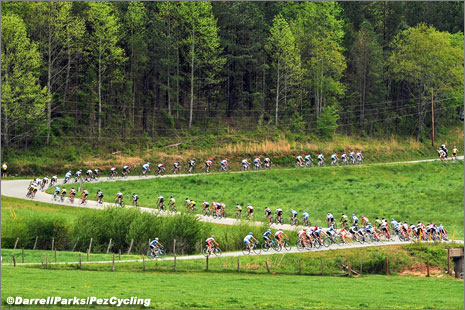 The peloton plows its way to Hogpen at the Tour of Georgia.

Much to the surprise of many cycling fans, luring luminary European teams to North America is not easy. Sure this continent offers a huge marketing opportunity for Euro teams, but to those with European sponsors, that opportunity is often lost on them. Robin Morton admits that North American race organizers have to attract the best European teams the old fashioned way: pay them. Appearance fees go back decades in European cycling tradition. For years, the Tour de France’s infamous lanterne rouge could earn thousands of dollars in appearance fees racing in post-Tour crits. So, even today, top European teams demand—and get—thousands of dollars in appearance fees (along with airfare and hotel accommodations) to compete in North American races. (UCI regulations also proscribe that race organizers pay certain for teams traveling to races.) The Tour of California, for example, is rumored to pay big bucks in appearance fees to attract top talent.

Of course, not all North American race organizers need or want the upper echelon of foreign riders. Eustice, for one, says he has “little interest in working with ProTour teams. The money to get ProTour teams I would rather spend it on racing for Americans.” Eustice is known for bringing up-and-comers to his US races. A few years ago, an amateur Belgium kid by the name of Tom Boonen finished second at the Univest Grand Prix. Still, Eustice pays expenses for the smaller European teams he invites. 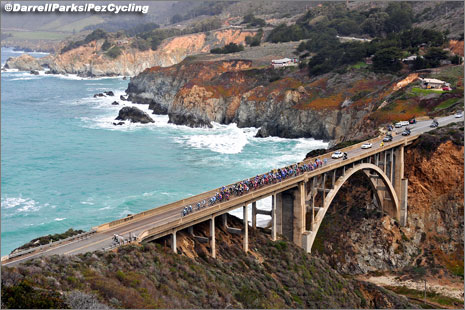 The more racing, the better for America. The country has a lot to offer.

Horses For Courses
While all these negotiations are happening, a race organizer can’t sit still. One of the key tasks is course design. Keeping in mind the UCI rules mentioned above and national cycling body regulations, a good race organizer puts rider safety first. Remember Stage 9 of the 2009 Giro? The day after Pedro Horrillo flew off the course into a ravine, the entire peloton stopped in its tracks to protest dangerous conditions on a circuit in Milan, complete with trolley tracks, parked cars and 25 turns.

According to Morton, a good course designer keeps in mind the flow of the race. Although Morton has never raced, she has a great feel for course design. It needs to hard and spectacular and appealing for fans and sponsors, but also not too steep or twisty. Eustice uses a colorful analogy: he says a race course must have room to “breathe,” to allow spectators and cars in and out in a way that is relatively safe and sane. A course also needs a start/finish area that is sponsor-friendly and easily accessible for fans. Morton likens her work to building a temporary stadium that can be built and razed in a couple of days or less. 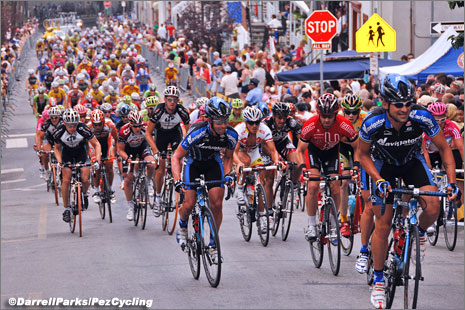 The Manayunk Wall in Philly.

So with all this in place – sponsors, media, fans, parcours, officials, infrastructure, volunteers, teams, etc. – the real excitement can begin when the starters gun goes off. But even the best laid ideas usually go awry. Morton and Eustice admit that no matter how carefully they plan, something almost always goes wrong. Eustice remembered the year he spent $15,000 on a race radio system complete with helicopters to relay transmissions from ground to air and back again. When race day came, the radios didn’t work. At one point, a break got 10 minutes up the road before the peloton realized what was happening. By then, it was too late to reel in the break; the riders in the bunch who came all the way from Italy to Pennsylvania to race were not too happy, Eustice recalls. 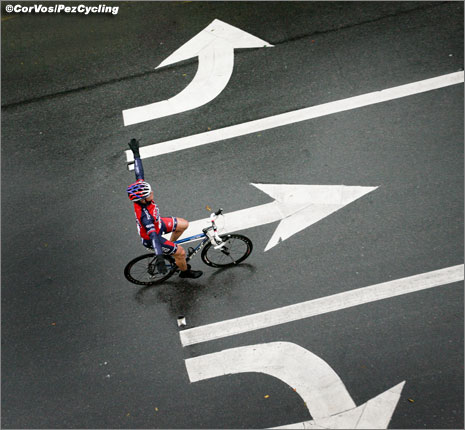 Where to from here? Will the Giro make its start in DC?

At the USPRO race in Philadelphia one year, Morton was riding in one of the lead cars when she got an urgent call on the radio. She raced ahead to find a 40-foot tree lying across the Benjamin Franklin Parkway. Someone, she corralled 40 marshals and volunteers to lift the tree and lug it off the course just before the peloton arrived. All in a day’s work for an American race organizer.