As part of his continued Spring Classics trip with Velo Classic Tours our man Mark McGhee has been out riding the Belgian cobbles that included the Gent-Wevelgem parcours and its famous bergs whilst being followed around by pro photographers on motorbikes, been up close to the pros at the Scheldepris race and hung out in VIP comfort in between. Life’s tough as Paris Roubaix approaches!

Today we rode out of Flanders on our way south, in preparation for Paris Roubaix. Belgium is a relatively small country but as soon as you cross into Wallonia, the French-speaking enclave, it feels as if you’ve arrived in a different country… quite literally and absolutely instantly.

You pass the ‘Welcome to Wallonia’ board and from that point on everything including shop names and road directions become French. Even our destination of Tournai, the oldest city in Belgium, has more than one name (Doornik in Flemish) and the locals speak a particular Picard dialect of French. 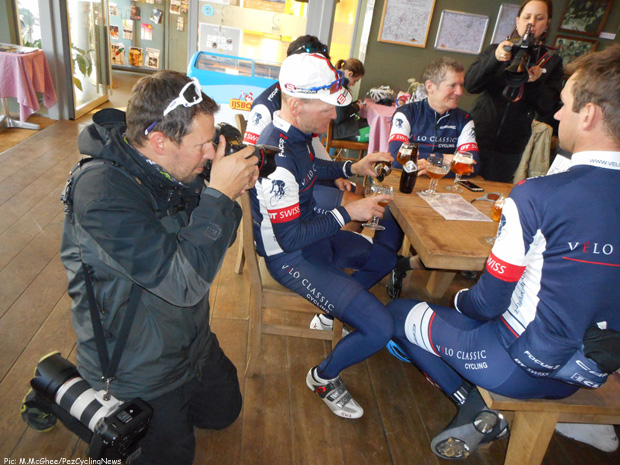 It was another 100km+ day of riding with a few cobbled sectors that our Velo Classic Tours host Pete has ‘forgotten’ about…and the first section was enough to rattle your fillings loose. With Roubaix coming up it would be good to recap the last couple of days. We rode the Gent-Wevelgem course on Monday and Tuesday’s ride was a real treat…we had two professional bike photographers, Iri Greco and Jim Fryer from Brakethrough Media, shadowing us all day and doing their very best to make us look as pro as possible. 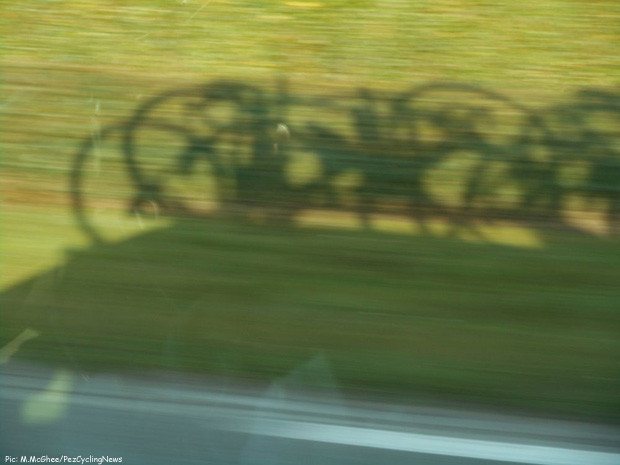 We met up with Iri and Jim and their moto pilots at Oudenaarde and we also had Martijn Maaskant along for the ride as well. Pretty soon, the bikes were coming in close and getting excellent shots of all of us as we headed towards the first climb of the day, the Oude Kwaremont. This was the first of 10 ‘monument’ climbs and when you team it with the Paterberg and Koppenberg that come close on its heels by the time you come down off these monsters, your body is crying out for relief. Tough luck because you hit the Steenbeekdries cobbled sector which, at 1.3 miles long, is enough to have you begging for mercy…all caught by the photographers as you try to conceal how much it hurts.

Next up it’s the Eikenberg where we watched De Ronde on Sunday, then the Keireberg and then we hit the Haaghoek cobbles again. And ‘no’ they didn’t get any better second time around. Before you recover from the pounding, we were onto the Leberg and then a beautiful downhill before the Ten Bosse. By the time we got to Geraardsbergen we were ready for lunch but we had to get to the top of the Muur first. It’s vacation time here in Europe and the Muur was packed with cyclists so the photographers couldn’t get clear shots. Having climbed it, Pete decided we should detour to the infamous Bosberg and tackle that before heading back to the Muur. 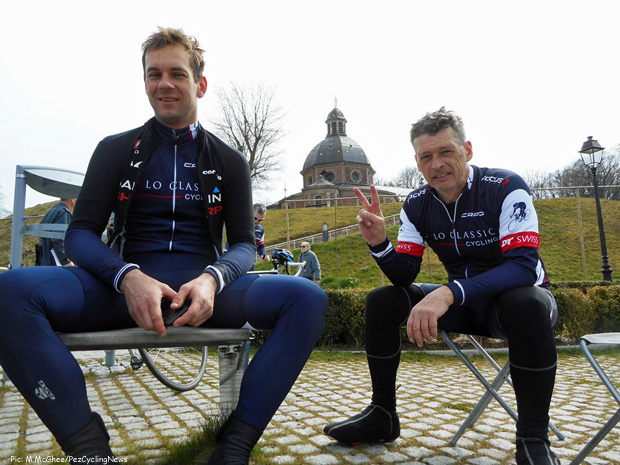 There are three ways up the Bosberg; the right way, the wrong way and the stupid way…and we tried the stupid way first by heading down a big hill before realizing our error and having to climb back up. One of us cracked, ‘so that was the Bosberg…not so bad.’ Pretty soon we were onto the real climb and it just rears up right in front of you. It’s not too long and the cobbles are in decent condition but it gets really steep at the top. After climbing we turned around and it was simply a case of letting the bike have its head and forgetting about the brakes as we shot back to the Muur.

This time it was quieter and we climbed in formation twice for the photographers and then again one more time individually to get images of each of us in our finest moments. A personal highlight for me was meeting photographer Ashley Norris Gruber up by the church and her husband Jered, (who got his start right here at Pez), was somewhere around getting his own shots. Finally it was time for lunch. 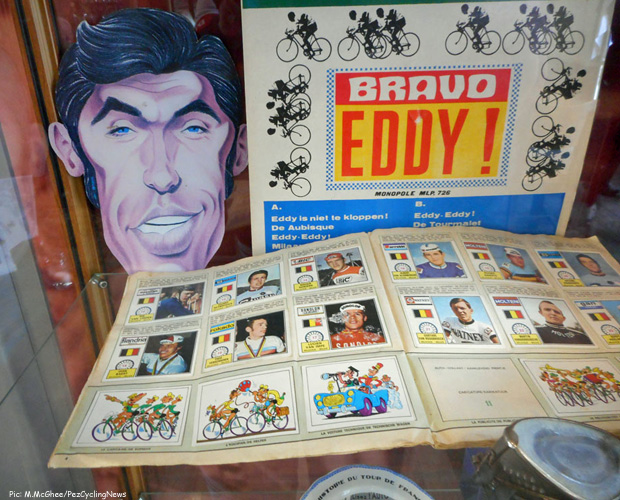 Tribute to Merckx at the Tour of Flanders Museum

And then we headed back to Oudenaarde on some rocking and rolling roads, mostly against the wind. It was great to cruise back into town and finish at the museum on what had been another long day. The reward: a tall glass of Kwaremont beer served in a glass complete with a cobbled base and cycling motifs. A great day! 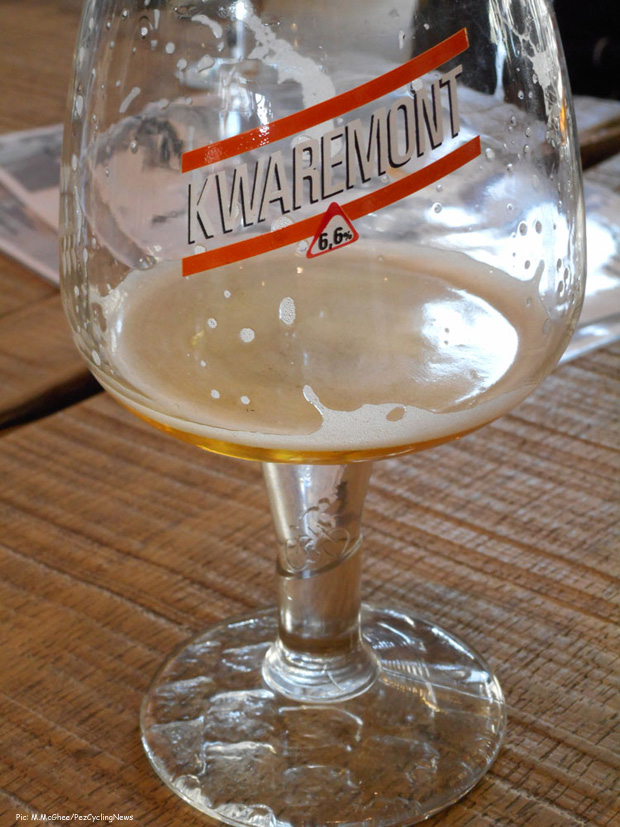 Served in a suitable glass.

Scheldepris Race Chase
A much more relaxed day as we were off the bikes and able to take in the Scheldeprijs semi-classic. We had VIP tickets to the start with everything laid on, including breakfast but the clever ones had eaten before leaving the hotel. The food in the VIP tent is snapped up by wealthy old-age pensioners with sharper elbows than a whole peloton of sprinters…and the coffee was rank. So we headed to a little café called Pelican Rouge where, although not officially able to open for a couple of weeks yet, they were giving away coffee for free. A top marketing technique and very friendly with it. 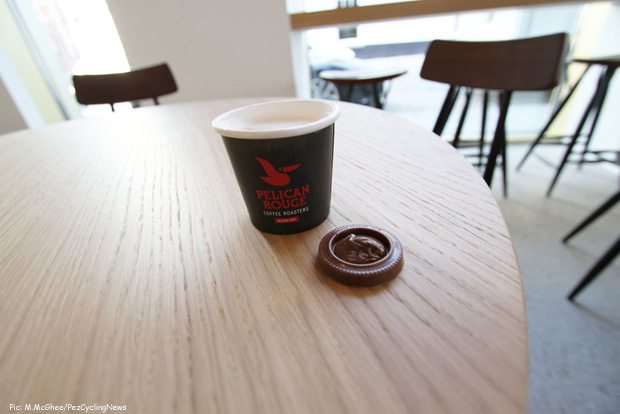 And friendliness was the name of the game at this race. Riders are under less pressure than at the Ronde or Roubaix and with the weather being nice they were all in good moods. We headed right to the area next to sign-on reserved for Press and we got to see the riders as they came forward. The lesser-known riders were happy to pose for photos but even the bigger names didn’t give you any hassle if you tried to get good pictures. There was Petacchi, Farrar, Peter Sagan, Brad Wiggins’ decoy man Bernie Eisel, Thomas and Sir Brad himself. The Sky guys were smiling but not saying much while Sagan was happy to talk when he found out that he wasn’t in a great hurry. 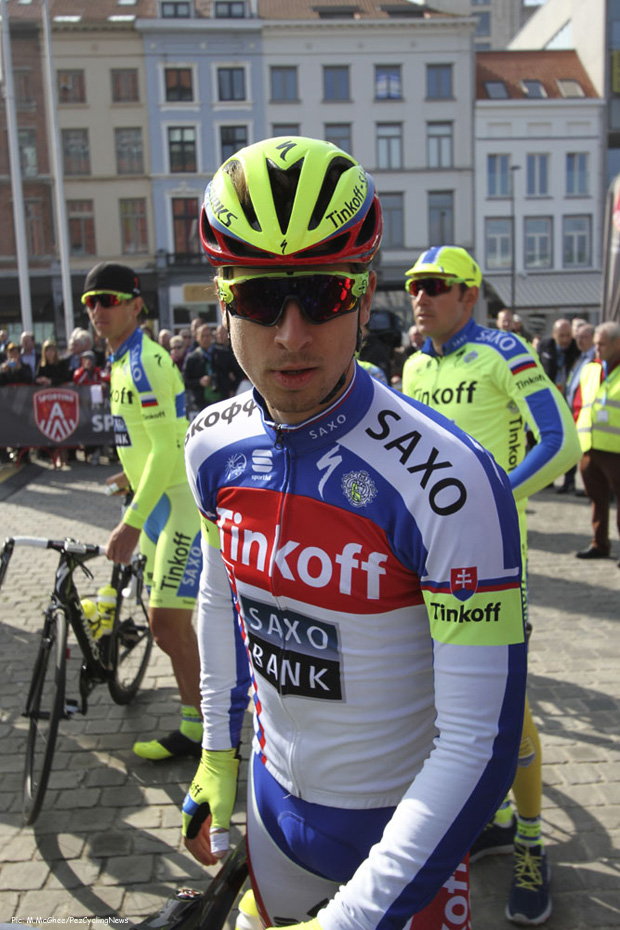 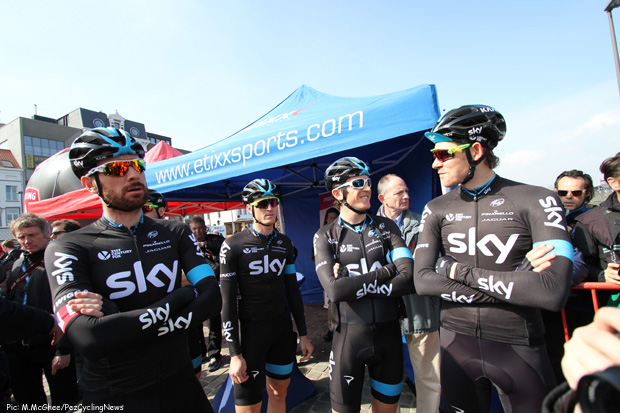 Pretty soon we had to leave if we were to claim our place in the race convoy but a parting ‘Good luck on Sunday Brad’ got a ‘thanks’ in return. 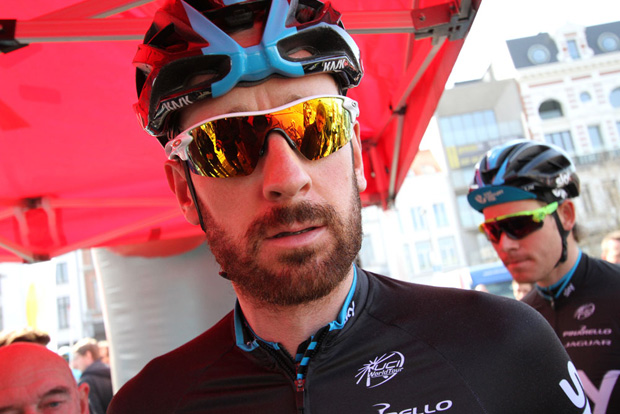 And the race was underway with a couple of riders off the back straight away due to flats and then using our van to try and weave their way back into the group. 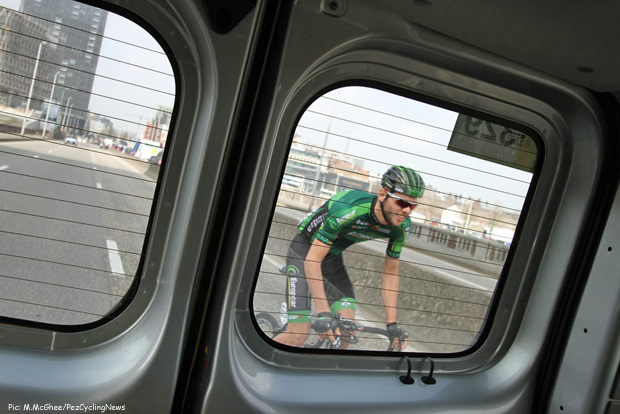 We stayed with the race for a while and then left the course so we could watch them at a couple of points. On one roundabout, Pete noticed a patch of gravel and road dust and promptly went in search of brush so he could clear the debris: the mark of a real enthusiast. 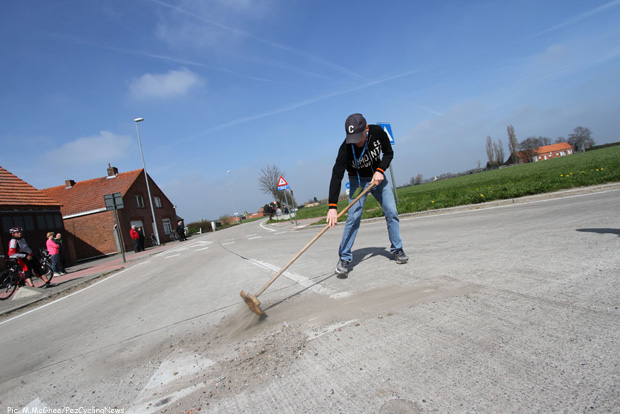 Pete clears the debris from the road

Then it was onto the VIP stand at the finish where we watched the race come through four times, each one quicker than the next. The break was caught on the last lap as the sprinter’s teams ramped up the pressure and it was looking like the typical mad dash for the line. A big crash however put paid to many rider’s hopes of success but the man of the moment, Katusha’s Alexander Kristoff is on a winning streak and easily came through to take yet another win. 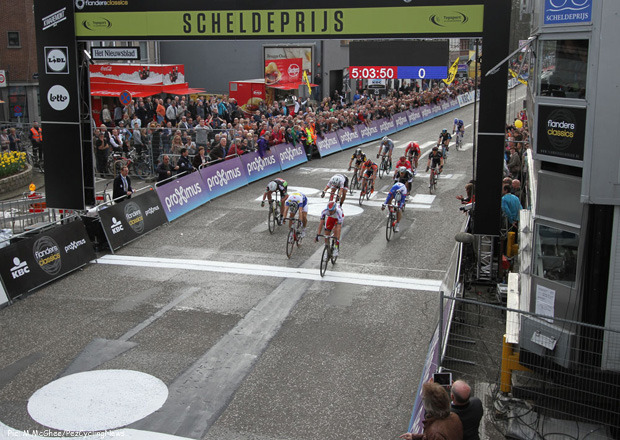 All that was left was to head back to the hotel and contemplate who might triumph on Sunday. The smart money says Kristoff but I still think Wiggins wants this badly enough to turn himself inside out to get it. We ride the cobbles tomorrow so we’ll get an idea of just how unbelievably difficult it’s going to be. Stay tuned to Pez for all the action.

Thanks to Peter and Lisa Easton at VeloClassic Tours for showing Mark such a great time throughout the cobbled Classics season. Check them out for yourself at veloclassic.com
Like PEZ? Why not subscribe to our weekly newsletter to receive updates and reminders on what's cool in road cycling?

Guldhammer held back by mechanical problem