Down and dirty is where the Velo Bella women’s ‘cross team has been the past few weeks. But as it goes with ‘cross, it’s often the dirtier you get, the better you do … as the ladies’ results prove…

– By Christine Vardaros
I recently returned to California after a three-week Velo Bella Cyclo-Cross Tour of the East Coast hitting six UCI events in four states. 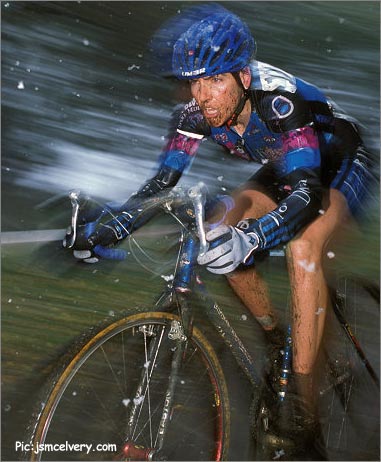 Christine gets fierce at Gloucester.

• Barb Howe, Lisa Vible and I were present to spread Velo Bella Vibes. As my good friend, Ronnie Piresand I pulled into the grassy parking lot of the Granogue event, we headed straight to the biggest tree we could find to protect us from the threatening sky. Shortly after I got on the trainer, the rain started.
It turned the trails into a soupy mess, making them more appropriate for mud-wrestling; the slick terrain would prove to be our real competition.

Since I was still healing from a bad crash in Portland a couple of weeks prior, I played it safe, dishing out love taps in the mucky-muck while Barb dealt body
slams. She finished a fine 4th while I trailed behind in 5th, happy to remain upright throughout. Lisa rode to a solid 19th. Lyne Bessette (Louis Garneau), the dominant Canadian National Champion, handily won the race.

After some ragingly hot Indian food and a good night’s rest, we were back at the start line of the Wissahickon UCI event. The course was completely opposite of yesterday’s slogging. It was mostly dry, with an array of switchbacks, headwinds, and short power climbs. Georgia Gould (KONA) took the holeshot,
while Lyne and I were in tow. 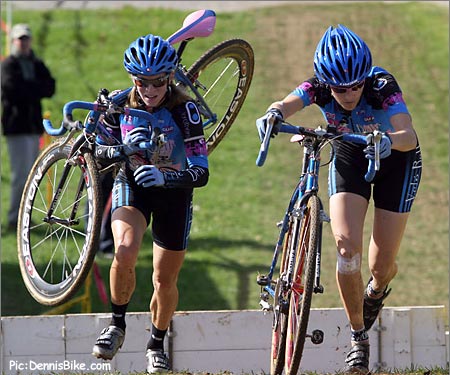 Lyne passed Georgia just before a long, flat, snake-like sandy section where
you can get dizzy if you forget to look up once in a while. I finally got around Georgia, but Lyne was quite a few turns up the course by then. Shortly after, Barb bridged to me and we worked together, constantly trading pulls, to keep Lyne in sight. Although we increased our lead over the 3-rider chase group including Georgia Gould, Mo Bruno-Roy (Independent Fabrications) and Tara Ross (Victory Brewing), we lost 45 seconds to Lyne by race end.

Barb and I finished up in traditional Velo Bella style, with a drag race down the finish line – complete with ready-set-go! She easily won the sprint, putting her in 2nd and me in 3rd. Lisa finished strong in 18th.

Gloucester is one of my favorite courses in the US, the oceanfront course has everything from bumpy turf to switchback climbs. What made it even nicer is that the VB posse of Barb, Erin Kassoy, Mel Metzger, and me were out to play!

On Day #1, our bodies were put to the test as we stood there in the freezing rain, waiting for the whistle to blow. Just after the start/finish straightaway, we turned right into a field of deep gooey mud. As riders were slipping and sliding, the race started to take shape. Again, Lyne Bessette was off the front, but this time she had our very own superstar, Barb, on her wheel. And Mel was just behind Barb! How do I know this? I was behind both of them – taking notes so I could report back to the Pez readers!

About five minutes into the race, my fingers started to go numb. At this point, my focus turned to finishing the race as soon as possible so I could thaw my fingers in front of the motel heater. My pseudo plan brought me up to fourth position. Just as I had 2nd and 3rd place riders – Barb and Wendy – in sight, the rain turned to hail and then to snow; snowflakes as wide as five centimeters smacked into us like pellets! 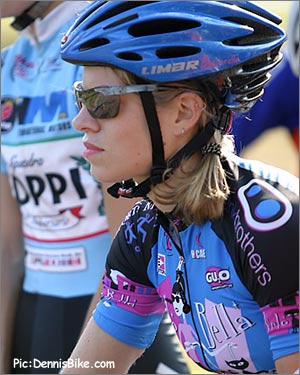 I spent the rest of the race within six to ten seconds off of Barb and Wendy, but never caught them. In sassy Barb-style, she out-sprinted Wendy, taking 2nd place – an amazing result! On a side note, I predict that Barb will be the one to watch for the next ten years – you heard it here first! I rolled in for fourth, Mel 10th and Erin 21st.

After the race, I immediately rode over to the car € but Ronnie wasn’t there! Luckily, Mo Bruno-Roy took me into her car where we shivered uncontrollably for a solid fifteen minutes before settling down to sporadic tumults, shakes, throbs, and teary shockwaves. Although it was quite painful as random body parts started to thaw, the whole experience was perfect preparation for those of us traveling to Belgium and Holland in a month to finish up the cross season.

The next day, we arose to warm, summery weather, giving the impression that the previous day’s bizzard must have been a bad dream. Thanks to the early morning sun and the steady winds blowing off the ocean, the course was mostly dry with a few little remnants from the climatic mayhem.

Since it was the eve of Halloween, we dressed accordingly. Mel was a princess, complete with sparkly tiara and diamond studded eye makeup. Barb was a devil horns protruding from her helmet. I went as a girly-girl – ribbons spiraling incongruously from my boyish haircut. But Erin’s pumpkin ears took the prize. 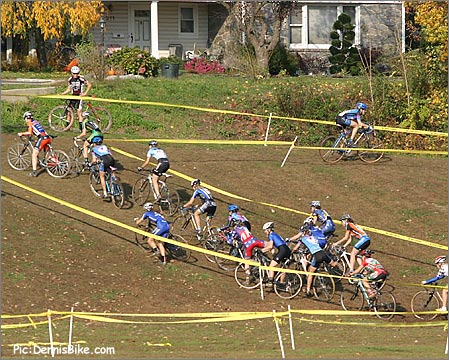 Christine leads the chase in Highland.

Within a minute of race start, Lyne was in the lead, but this time she had a different Velo Bella in tow – me, along with Wendy Simms. After an early crash, I finished the race in 9th place, thrilled to have done that well after the 40 minutes odyssey. Lyne won the race again and Ann Knapp flew in for 2nd place. Barb and Mel had great races, finishing in 5th and 8th respectively. Erin suffered from bike problems and finished 39th.

East Coast weather is rather unpredictable; last week, we were in a heavy snowstorm and this week in a heat wave. It must have reached 80 degrees by the start time of 1:30pm. The race began with a gravel uphill that emptied us out onto a huge grass field where the course twisted back and forth on itself, taking us through two sand pits, a handful of berms, and a technical descent.

For this weekend’s festivities, I was joined by Barb, Erin, Lisa, and Sami Fournier. Just after the whistle blew, Georgia Gould gapped the field as Barb and I slowly reeled her in, until I slid out on an off-camber section, almost taking out my own teammate. I immediately got back on my bike and attempted to chase, but instead, I was the one getting caught, by one rider after another, something that tends to happen when you’re pedaling backwards. I pulled off the course, thinking that maybe I was simply not recovered from the Gloucester crash. It was while pushing my bike toward the pits that I noticed a gruesome scorch-mark in the sidewall of my tubular: one of the brake-pads had jammed against it in the crash. Not what we usually mean by “burning rubber!” 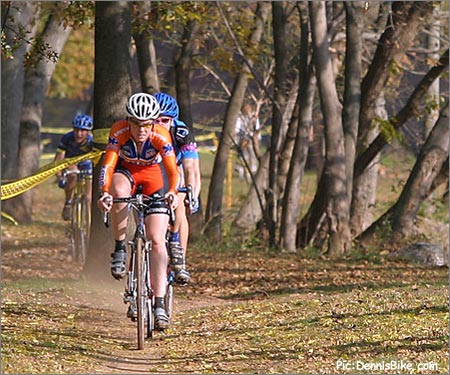 The thing about ‘cross, is you can never count on the weather… Here racers battled extremely sunny and warm conditions.

The gun went off and my plans to ride conservatively were immediately 86‚d when Rebecca Wellons (Gearworks/Spin Arts) gapped the field and I chased
after her. Within a minute, I regained composure and sat up, waiting to see who would join us. Shortly into the race, we formed a group of four – Barb,
Georgia, Mo, and me.

Once the three weekends of racing were over, we celebrated by eating and eating while watching the KONA boys school the rest of the pro men’s field.
Completely opposite to what Barb and I did at the finish line an hour earlier, Barry Wicks and Ryan Trebon rolled across the line, both with hands raised.

Check out the Velo Bella gals online at:
• www.VeloBella.com
• www.ChristineVardaros.com
Like PEZ? Why not subscribe to our weekly newsletter to receive updates and reminders on what's cool in road cycling?