For someone just coming into the world of cyclesports, the terminology, concepts and history can perhaps be baffling. How can you win the Tour de France without winning a single stage? Who was the Eagle of Toledo? What is the Cima Coppi? When you ride tempo up the Alpe and the elastic snaps, does the Man With the Hammer come? Thanks to a lovely little book by Tom Bromley, all will be made clear. 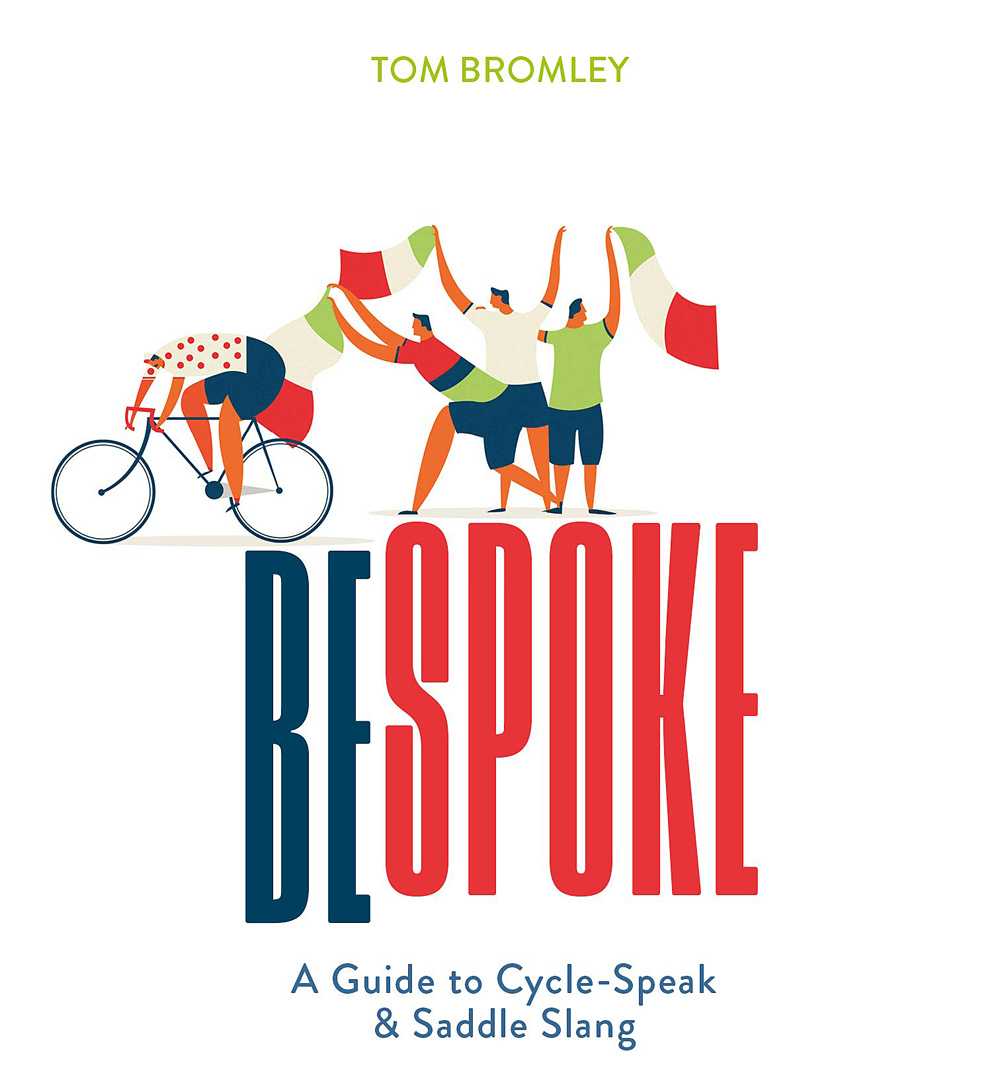 “Bespoke: A Guide to Cycle-Speak & Saddle Slang” is a valuable lexicon of terminology that is not only useful for the neophyte but entertaining for the aficionado or, if you prefer, true tifoso. Because cycling has been an international sport for more than a century, its terms come in a variety of languages—primarily French, Italian and Spanish—that non-native fans are happy to employ. As the back cover proclaims, “Bespoke” offers “170 of the most lyrical, outlandish and down-right humorous terms, complete with rich anecdotes, wry observations, as well as detailed usage and origin notes.” 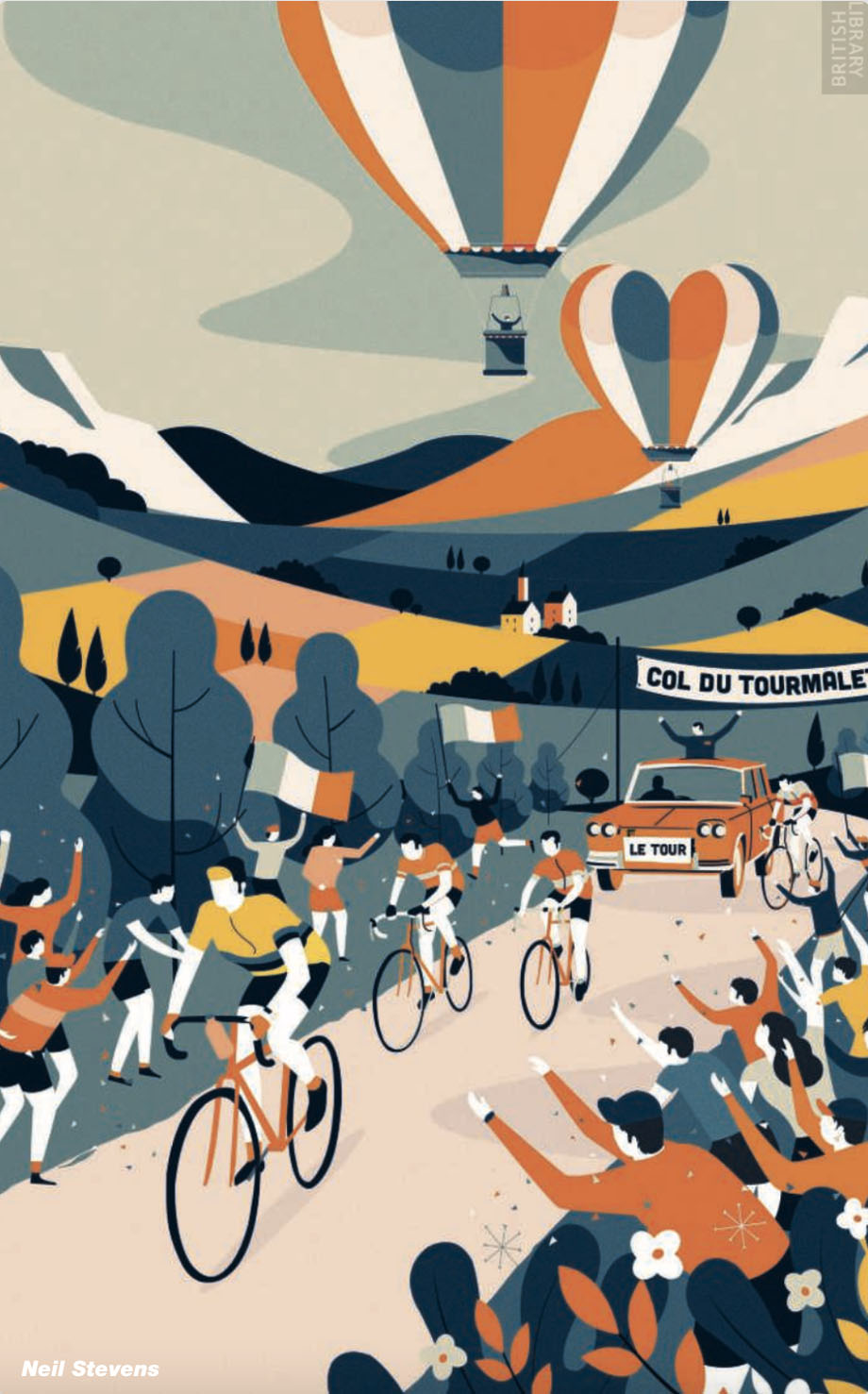 For a small book of less than 200 pages, the author has included a remarkable amount of information. Fourteen chapters cover what actually happens in a race—look out for the loneliness of the Chasse Patate!–, to the different types of riders, how the pro season is arranged, prizes and the meaning of jerseys, and much else. The dark side is not overlooked as cheating has a long history and is an inescapable part of the lore of cycling and one can only be impressed by the inventiveness of those wanting to circumvent the rules. 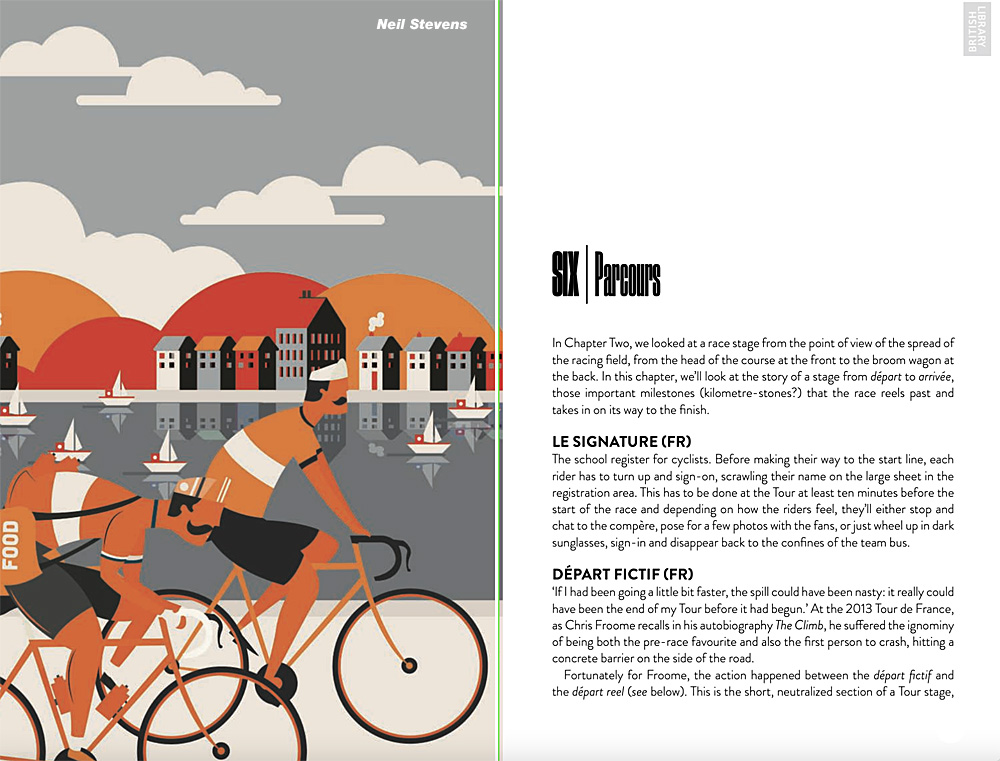 While it is true that in other sports there are nicknames for notable participants, cycling has to boast the weirdest collection as journalists coined monikers that were meant to spice up the stories of epic suffering, valiant defeat and unparalleled (well, for that race anyway) triumph. The chapter on nicknames reminds us of how the Deathrider of Lichtervelde, the Pedaler of Charm, and the Squirrel of the Canals (!) all came by these names, and even mentions some that were self-applied—Il Pirata; the Shark of the Straits—but not the luckless Cobra. Could there have been a more appropriate nickname for Bernard Hinault than le Blaireau—the Badger? “When I am annoyed I go home, you don’t see me for a month. When I come out again, I win. You attack me; I get my claws out.” Nicknames are so prevalent in cycling (although, oddly, not so much for English-speaking riders) that several chapters could have been devoted to them. 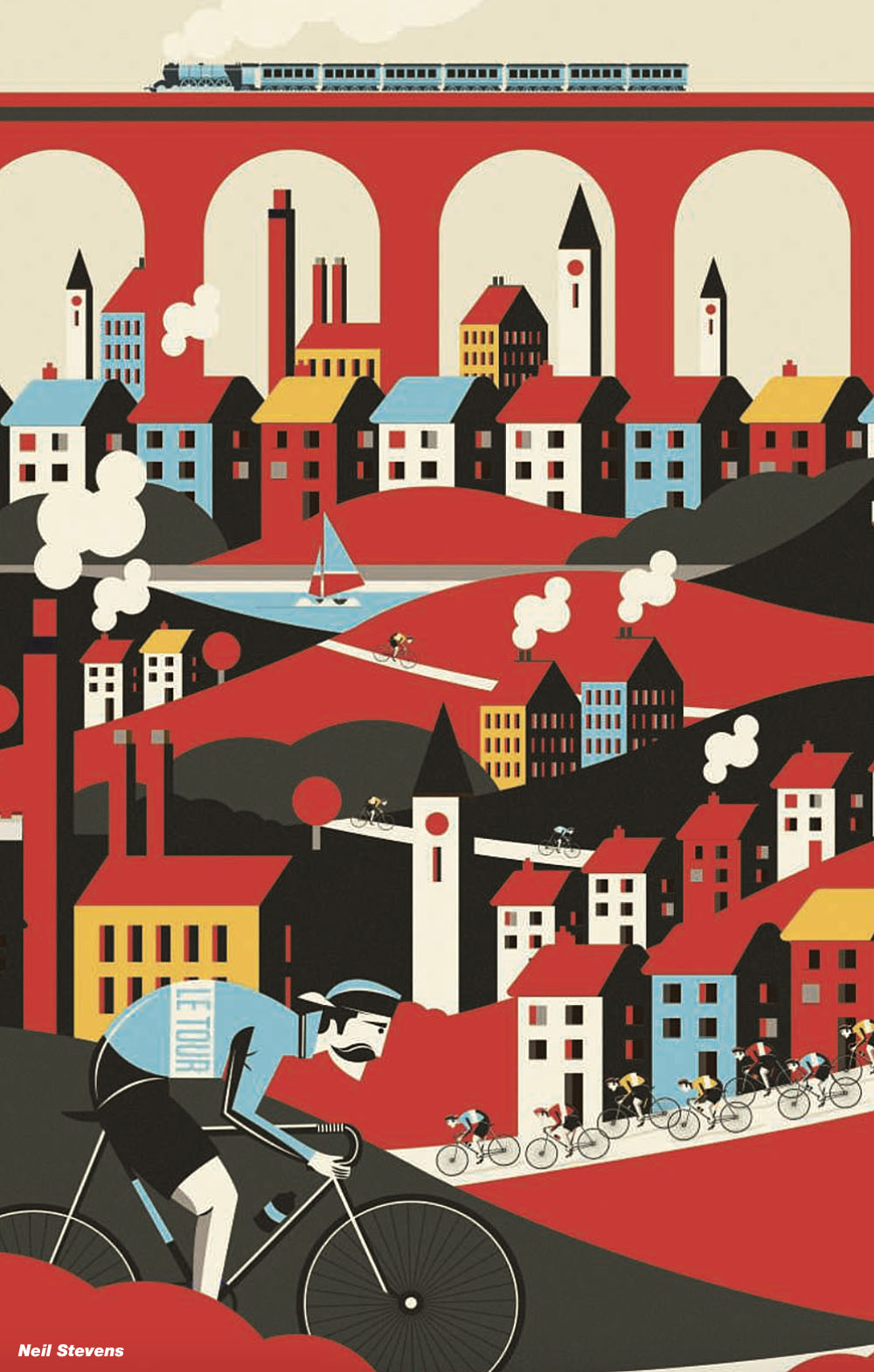 The final chapter of the book covers “The Races of Races,” events that were even beyond the normal epic scope of pro bike races. The insanely difficult 1914 Giro d’Italia, Coppi vs. Bartali in the 1949 Tour de France, Beryl Burton’s smashing the 12 Hour time trial record in 1967, the frost-bitten 1980 Liège-Bastogne-Liège, and even the surprising last-minute result of the 2020 Tour. 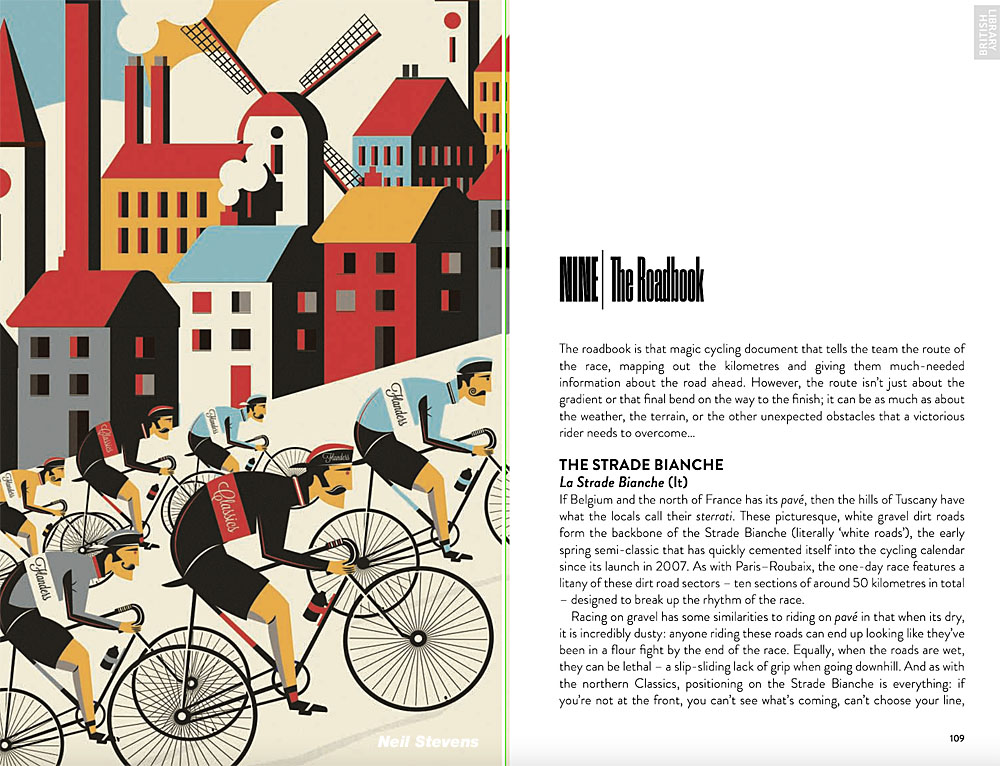 Each of the individual terms, which are cross-referenced, follow a logical sequence. For example, the Queen Stage is given its alternate language name (Étape Reine/FR; Il Tappone/IT; Etapa Reina/SP), then a definition is provided: “The queen stage is the stage within a race that is generally considered to be the hardest and toughest. The origins of the name are a little unclear, though a comparison with chess, where the queen is the strongest piece, is not an unreasonable inference to make.” This is followed by a description of just such a brutal stage in the 2015 Vuelta. 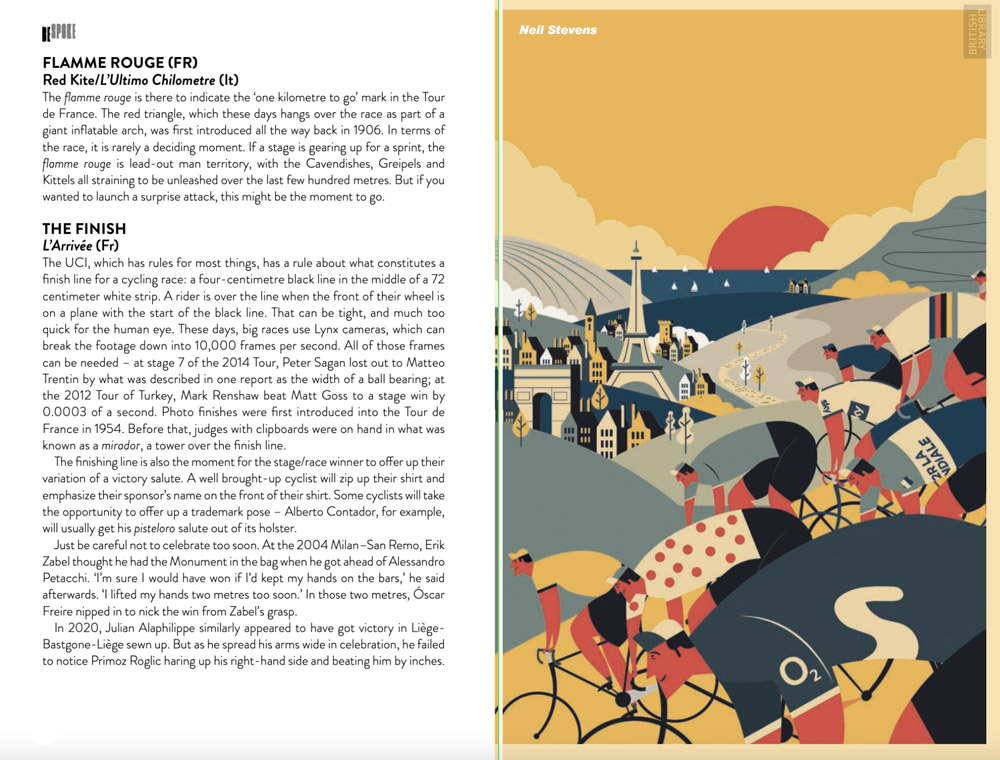 There is much here to delight someone casually skimming the chapters, from etymology to history. While there are several vintage black-and-white photos to illustrate the book, what really makes it are are the wonderfully charming works of artist Neil Stevens, which head every chapter as single page illustration but also are sprinkled throughout, adding enormously to the overall good humour of “Bespoke.” 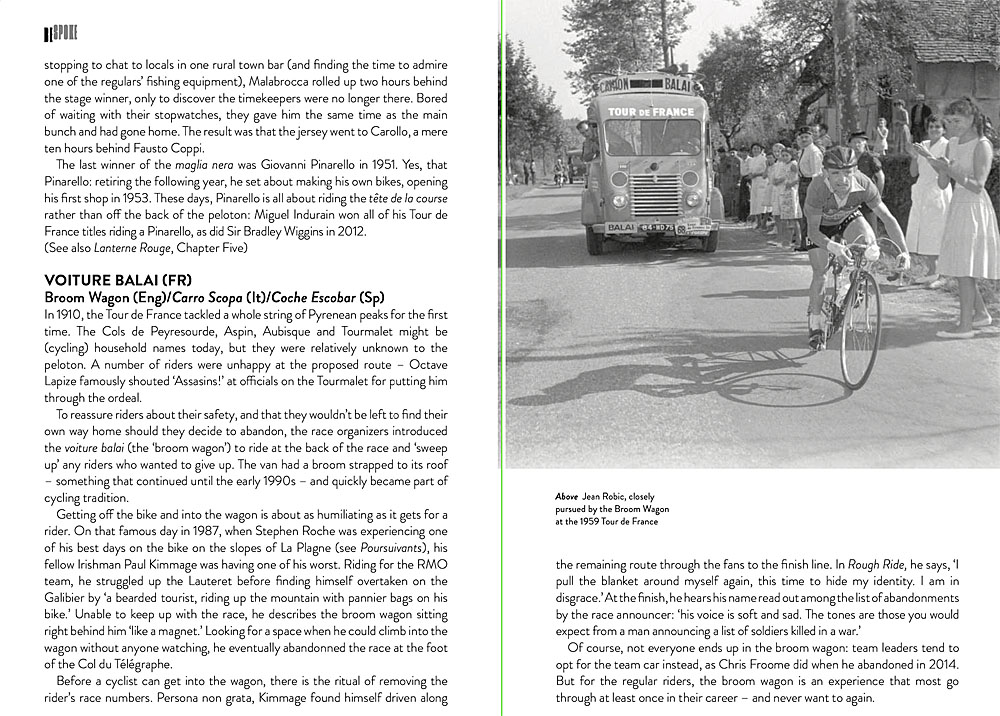 The bibliography is a useful one, including not only many recent books that we have reviewed here but includes a selection of good websites, with Pezcyclingnews amongst them, of course! 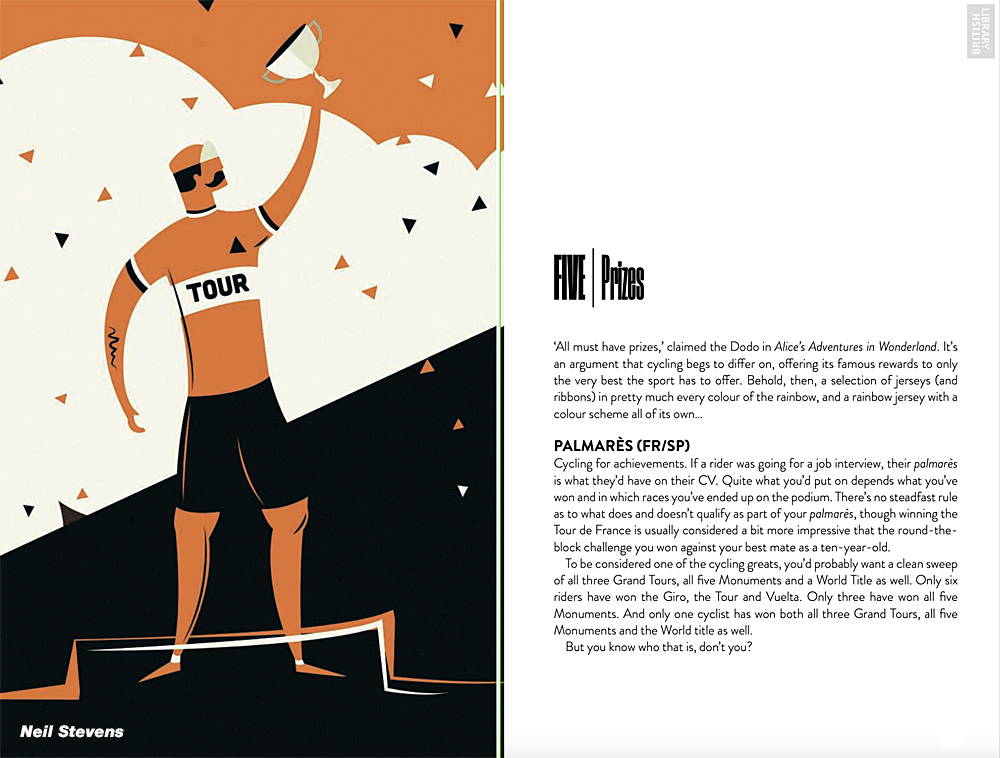 Published by The British Library in a quality little hardback edition, “Bespoke” would not only be welcomed by a reader new to the world of pro road racing but also as a handy reference to those who have loved the sport for years but are wanting to add to their knowledge of cycling lore. The author notes: “Cycling at its best offers fans something few other sports can match—rivalry, romance, stories, scenery—it has, to borrow the word for winning in style, panache.” 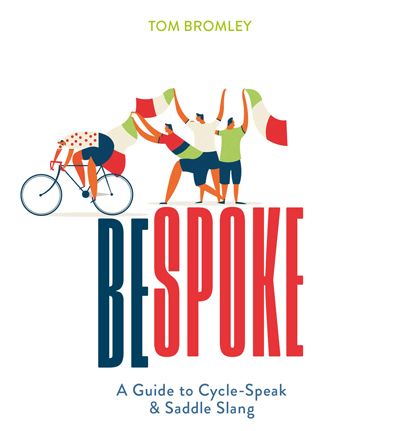 **Buy It from AMAZON here. 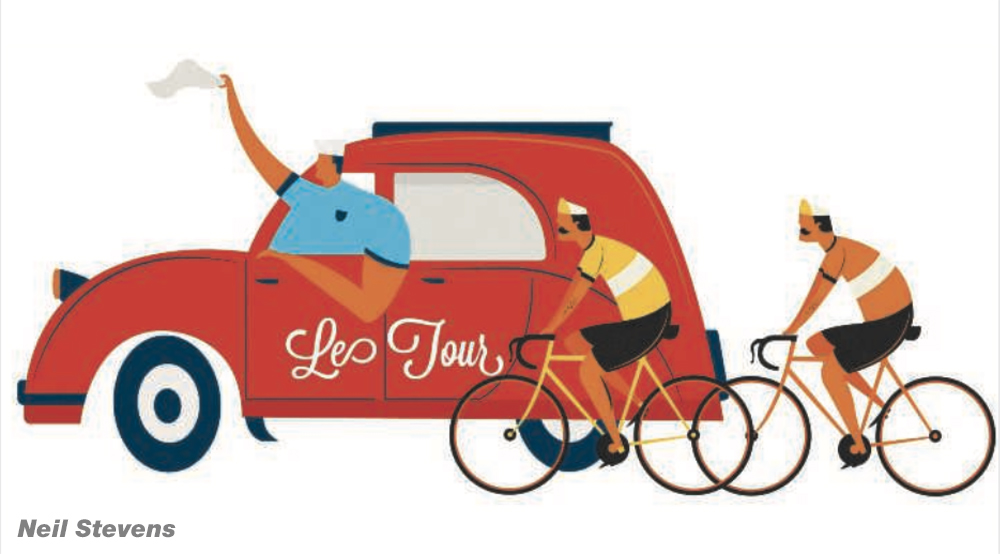