There’s no better Saturday ride than the 300km from a still wintery Milan south to the more agreeable San Remo on the Mediterranean coast. Four hours of flat to get warmed up, a gentle climb over the Turchino Pass, and then sun, sea, and salt air enroute to the best tasting seafood risotto you’ll have. If you’re Italian, you know this day is about so much more than just bike racing… 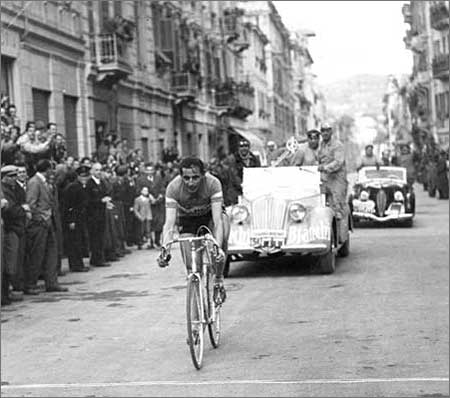 It’s late in the night. The dark is all around me, all around my house. My wife is upstairs sleeping and my baby too. There are no noises, just the loud voice of the rough sea outside and a dog far away against the wind or the sand or something else. It will be my fifteenth Milan-Sanremo on Saturday. My first one was in 1990 and the first race I saw live. 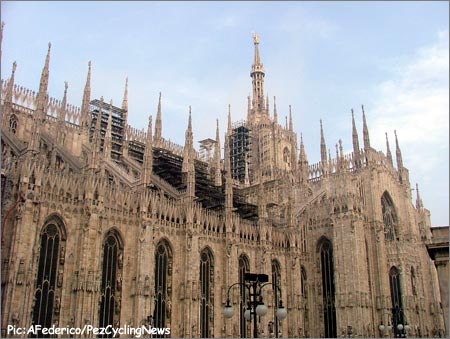 The race leaves from Milano’s famous Duomo – but the weather is no sure bet in March.

I will never forget the two groups, the smell of the air, the official cars, the police, the scream of the people. I was sixteen years old and the world was just that land on the sea called the Riviera in the north west of Italy. I was alone with my bike, only ten miles from home but it felt like the other side of the world. Sanremo was a dream, as far away as the moon. I forgot almost everything that happened that day. But not the feelings. 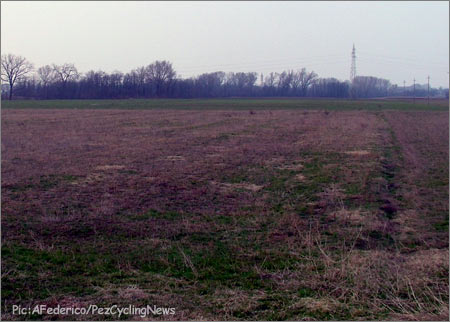 Heading south across the Lombard plain – long, flat and boring flat until the Appenines.

Another season will begin just when the riders pass through the tunnel on the top of the old Passo Turchino. I will be there to watch it start. There will be nothing there. No podium girls, no sponsors, not too many people…. Just the cycling. And the cold, and the wind. But on the other side of the tunnel another season will start. 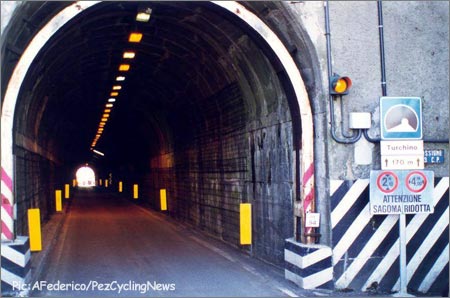 The famous Turchino. The highest point of the race. 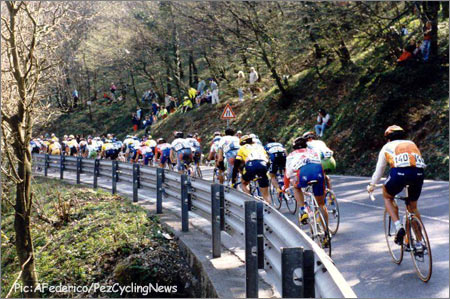 The bunch in 1997 racing towards the coast – no bars, no restaurants, no famous journalists, no TV, no podium girs. Just cycling.

The route is well known. It’s every year the same, for hundred years. A long flat road to ride in the cold of an early spring morning. Somebody will leave the bunch to find just wind and people on the sides of the road, and sun or rain or what God will reserve. Than the long and easy climb to the old Turchino. The riders of the break will start to lose advantage, and for the first time the favourites will meet near the front of the bunch. Good morning people – it’s time to wake up. It’s one o’clock in the afternoon of an Italian Saturday. Just 150 km to go! 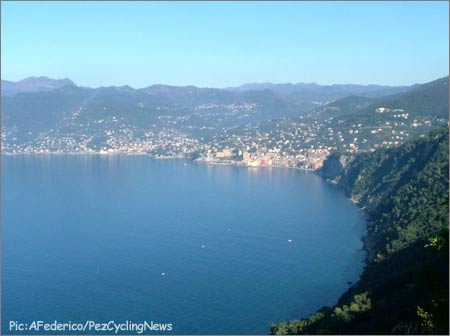 So this is the Riviera. This famous land covered with mimosa and sun. Start the climbs of La Colletta, Piani d’Ivrea, Capo Noli. The break is going to die. Two or three minutes in Albenga. The famous three “Capi”: Capo Mele, Capo Cervo and Capo Berta. The morning break finishes and here starts the most famous part of the Sanremo with the Cipressa and the Poggio. A final sprint? Or an attack on the top of the Poggio? 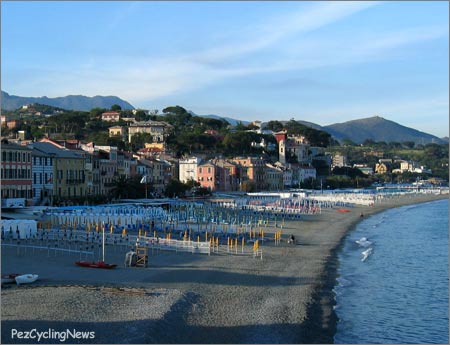 The beaches will be empty on Saturday, of course because it’s still March, but also because the fans will be lining the corsa through the coastal towns.

I don’t know and honestly it is not so interesting for me. I will watch it, of course. But my favourite Sanremo is this one I’m riding now with you. The best Sanremo is the one you’ve imagined during the coldest day of the winter when your bike was closed in the car box. The best Sanremo is that one you ride with your fantasy at your office desk waiting for the time you will ride again alongside your sea, or your field of grain. So many times during winter I went on the top of the old Turchino and I started to imagine again and again.

From the top of the Poggio begins the final dash to Via Roma in the town below.

My Sanremo is an old book where I find hundreds of old pics of the race. Hundreds of words written for it. My Sanremo is the evening before, tasting a beer with a friend and planning how see as much of the race as possible. It’s my old friend Romolo that always tells me about that time sixty years ago when Coppi attacked on the Turchino.

How many people left… Please leave me the Sanremo because I need to live another spring. Again.