PEZ starts the first stage of the 2007 Giro d’Italia with a double report – the nitty gritty facts done quickly and then on to the good story: Ed Hood follows the CSC team around one of the most technical TTT courses in recent memory and tells the tale: without further ado…

The Best of PEZ – To help make brighter these winter days, we’ve selected for your viewing pleasure some of our Best Stories of the Year. Who decided which of our 943 stories from 2007 were the best? – we did! Through the next week we’ll present for your consideration some of the work we’re most proud of, and hope you enjoy one more look as much we do. Sometimes a glance back helps clear the path ahead. This story originally ran in May 2007

When the opening day team time trial was presented over the winter, it looked like an interesting start to what would undoubtedly be a bombastic Giro, but after Ed Hood’s report from yesterday and the comments from the riders themselves, it became apparent that this opening stage was going to be something of a doozy, and so it was. 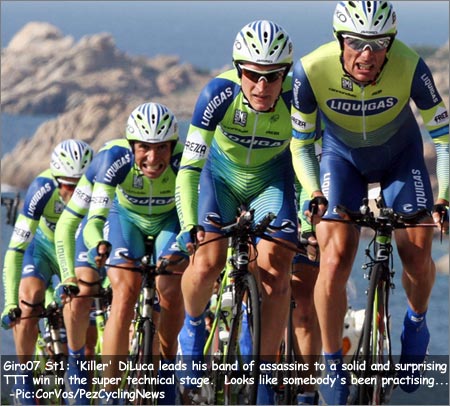 The time gaps were ANYTHING but insignificant, as the Liquigas team put on a sterling display to take top honors by 16 seconds over the Astana squad. Enrico Gasparotto led the team over the line over a visibly irritated Danilo Di Luca, and with it the first Maglia Rosa to the young rider.

Di Luca later commented: “I was not upset, it is important that we win. We have a great team. It is truly beautiful,” said Di Luca after crossing the line. “It was a great test for the team…I am not upset.” Ok, so he’s not upset.

So that’s 16 seconds in the bag for Di Luca over one Paolo Savoldelli, absolutely perfect considering that Di Luca will lose time to Il Falco anytime else that the riding goes TT. After that top 2 though, the gaps start to widen – 33 seconds from Liquigas to the non-GC factoring CSC, then 42 seconds to Lampre and their big hope Damiano Cunego. Discovery follows at 52 seconds as their big hope, Popovych, took a tumble late in the stage – nearly a minute!

Then there’s poor Gilberto Simoni who’s already behind the eight-ball almost a full minute and a half behind Savoldelli. Sure he’ll gain some time back, but that’s not exactly the kind of start anyone hopes for. Hey Signor Savoldelli, I’ll spot you 88 seconds, do what you can with it…

Liquigas and Astana have to be pleased with the day’s result – Astana didn’t win, but didn’t lose much time, whereas most of the other GC teams have to be at least moderately bummed, because this was an opportunity to gain significant time, or as in the case with everyone but Liquigas and Astana – a beautiful chance to lose important time.

Onto the up close and personal story of Ed Hood’s saga following the CSC squad:

The Isle of Caprera just off the coast of Sardinia, 15.44 on Saturday; the Peugeot is idling – there they are, let’s go! Dave revs the little car and we accelerate up to speed and tuck-in behind Team CSC, its stage one of the 2007 Giro and PEZ is right there.

The road starts to drag at once and the speedometer says 40 kph as the drag though the trees, bites at the men on the Cervelos. There’s the 90 left at the top and it starts to drop to the causeway, 80 kph on the drop then 60 and a neat line as we head out across the water. 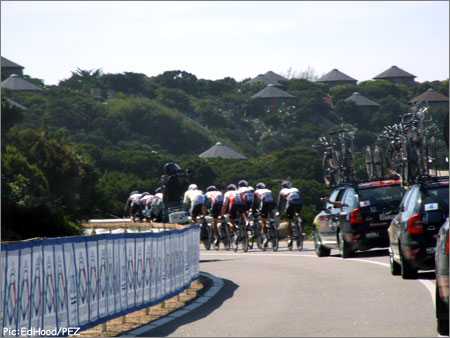 Right in front of us is the high point of the course on Maddelana; they’re all over the Bailey bridge safe and sound, there are knots of spectators here rather than big crowds as the squadra hurtle through the bends. It’s the Naval Academy climb now, 35 kph and it’s a long line; there’s the top and a 90 right with a big crowd as it drops – Cancellara leads the charge and the needle is rapidly back to 70. 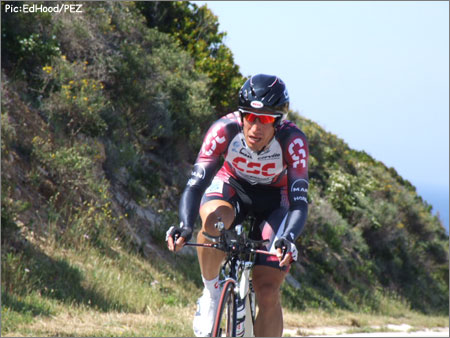 And then there was one less.

The big Swiss is easy to spot in his world champ’s skin suit and so is Davie Zee in the stars and bars of US champion; they are cranking it over like Moto GP riders as they sweep through the bends. It rolls now, beautiful coves, little beaches and another drag, ‘50’ the little Peugeot tells us. 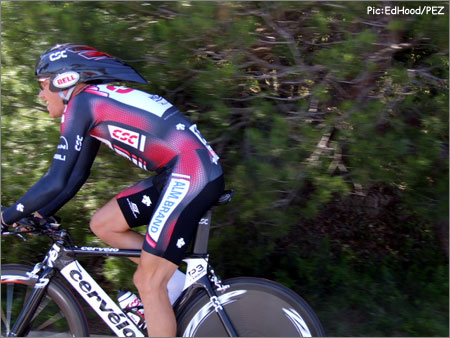 It almost feels cruel to look at these pictures…

That’s the 15 k to go banner and its steeper up here, 30 on the clock, that’s painful, it kicks-up again, down to 20 – man off! Number 184, Juan Jose Haedo; this is no gig for a sprinter any way, we pass him, jeez, he’s hurting. Still it drags and we loose another, I can’t get the number because Dave has to swerve past the team cars but not upset the commissar too much. Still this hellish course climbs and Matti Breschel goes too, the man has been torturing himself; it’s a massacre out there. That’s six left; five to count. 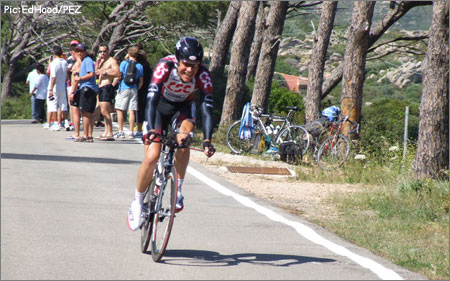 Getting dropped from a TTT is a very personal, agonizing experience…I know.

Finally it drops, but just as fast kicks again and this time we think its Volodymir Gustov who has blown, it’s hard to tell with the noise and the cars swerving. That’s five left and there’s no margin for error, the worst of the climbing is over though. There’s the ten to go banner, 55 then 60 as Davie Zee drives, Cancellara looks good and so does Norwegian TT champion Kurt-Asle Arvesen as it lifts yet again, the views are breath taking but Dave has no time to admire them, the Peugeot wasn’t designed with keeping-up with a rampant CSC squad in mind. 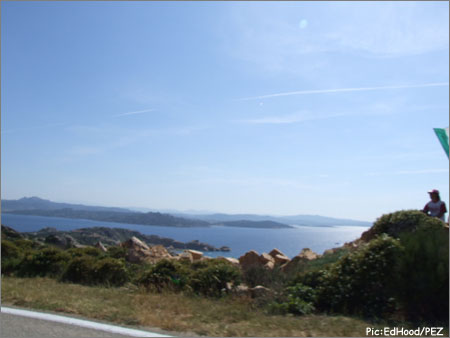 There’s 8 k and no chance of pictures, the five riders are just a blur in the windscreen, and it’s like a fair ground ride as Dave saws at the wheel to keep us on-line. The 7 k banner flashes-past and the speedo says 65 through rights and lefts as the team drops us; Zabriskie has them on 85 at the bottom of the descent and still pumps-out 50 over the hump which follows. 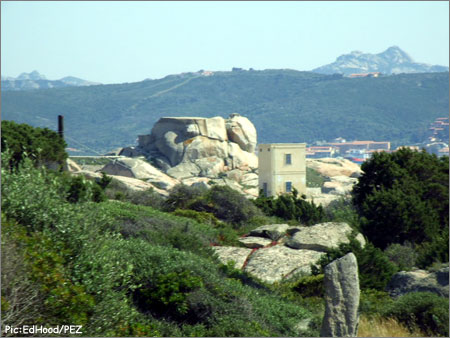 Were back at the sea, there’s 5 to go; I missed 6 in the excitement as Zabriskie still hunches and hammers out the rhythm. It twists, turns and plays hide and seek with the sea before a rare straight of a few hundred metres along the sea front, Cancellara looks great, fluent and fast. Into town, 90 left, last climb. This is savage; the big world champ sits on the tops and spins as the line stretches but holds. 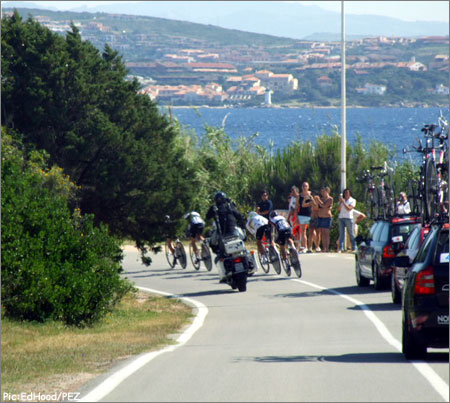 There’s the top, 90 right and its 1500 to go; this is crazy, we’re dropping like a brick, I get flung-around the car as the rights, lefts and hairpins come at us, Dave is sawing-hard again. The crowds are huge, but it’s too scary to take it all in properly; last right hander, no run-off for the cars and we drive through the finish line – it’s over! 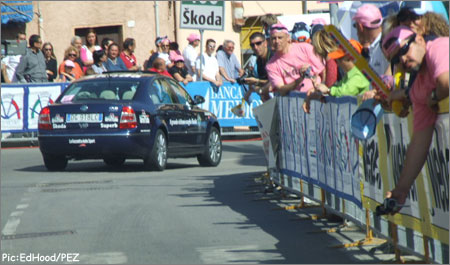 Cancellara stops quickly and the microphones are stuck in to his sweating face. The rest of the team trickle back to the team car, Andy Schleck is wasted, but Davie Zee manages a smile. 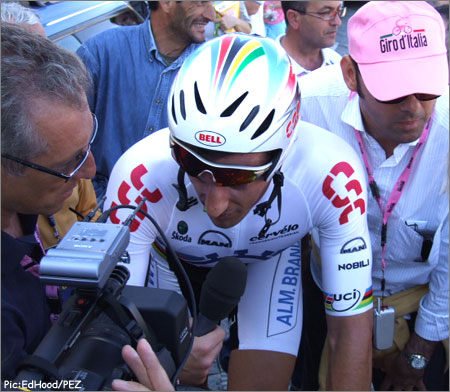 Fabian, can you give us a detailed description of your ride today starting with your breakfast, through to your warm-up, and then your thoughts on the TT? 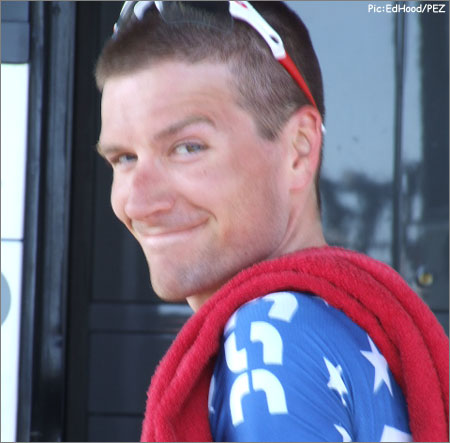 Eh you know, it’s easier when you’re fast like me. 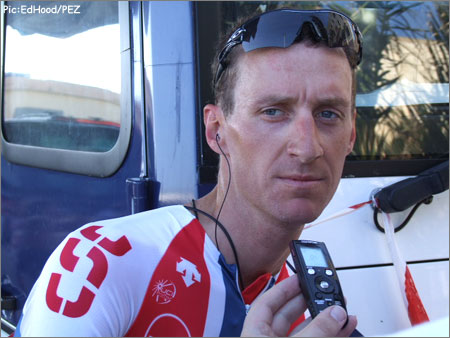 You know, I honestly don’t know why I do this to myself.

Right now we don’t know, but I can tell you that it was damned impressive where ever they finally finish. 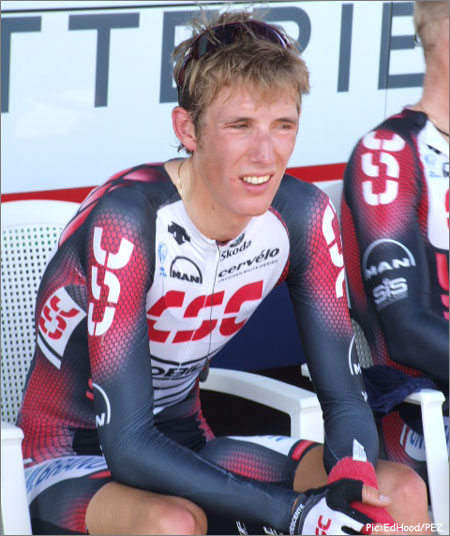 Andy Schleck looks happy to be done with THAT one. 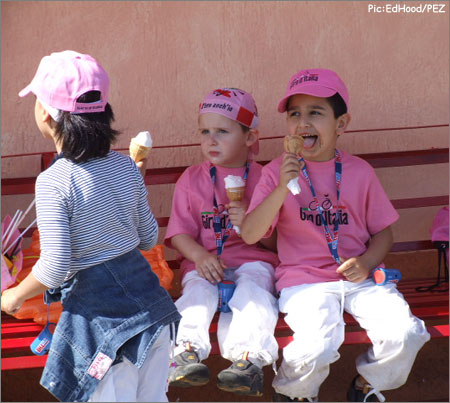