Roadside St. 14 When you start each new Giro you understand you’re a year older. You feel a stranger to the village approach and for a moment you believe it’s better to return home and proceed with your “normal” life. But it’s just a moment. The call of the road is stronger than any other.

Especially if I start to think to the hundred of home projects my wife planned during the winter. Suddenly I feel free travelling towards the Giro village and starting this new adventure.

Pez Sez: This was also the day – the one day a year that Ale and I meet and chase the race. From our chance meeting on the slopes of the Finestre 5 years ago, we’ve become good buds, and this day is one I always look forward to – chasing the race, comparing notes and photos, and finally rewarding ourselves with a good meal at day’s end – but that’s another story… 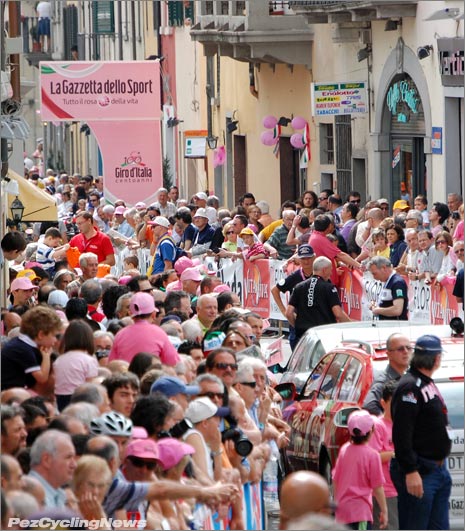 The village is always a recipient of emotions.

The 14th stage made its move from Campi Bisenzio, a small town near Florence; we are in Tuscany, in the middle of Italy. It’s warm, and every day becomes warmer (unusually warm for this area). After a long winter it seems we should prepare for a long summer. The stage travels through the Apennines crossing the border between Tuscany and Emilia. Two regions where women know how to cook.

I love the Apennine stages because they give the opportunity to discover hidden places and their people. Nowadays the Alps are much more emancipated as many tourists are travelling over there from all the Europe. The Apennines are still forgotten by the strangers and by the Italians too. But the reality says that in those places the life is better and the people are more open to the others; open to speak, to tell about them. Their stories, maybe fantastic, are nice to be heard. Everything takes time, because they don’t know what is the hurry. 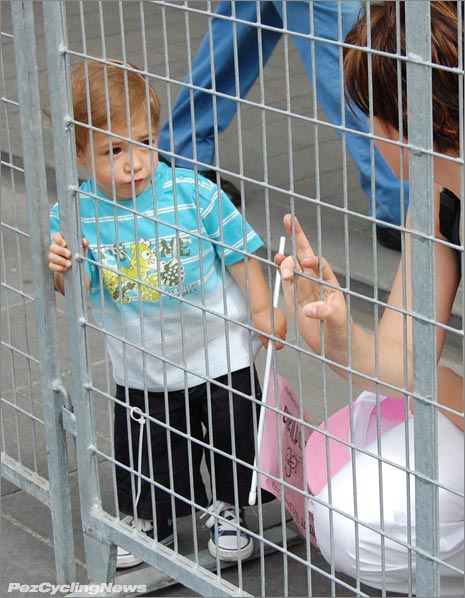 Time to wait for is also time to learn about something new.

But those who follow the Giro knows to wait. You wait for everything. You start to wait for a car park. Than for credentials. Then for the riders. Then for the start. The departure village is a recipient of different emotions. The people are excited for everything, they ask for caps, for photos, for a look. Sometimes it’s enough for a rider just to look at them to make them happy. 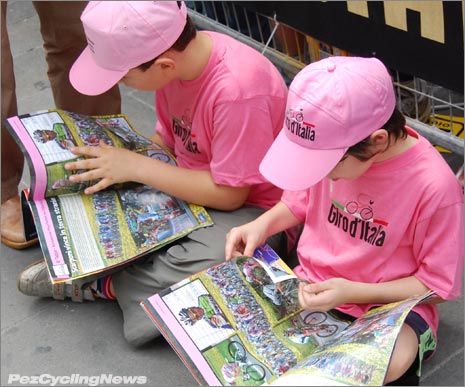 Inside this crazy world someone finds the quiet to study cycling.

Rider are excited for the stage. The tough moments of the day before are forgotten and, for sure, they stage will reserve good moments for them. I believe someone will move on a break today. Always the Apennines give space to the brave. The roads are narrow and full of bends, climbs, descends, hard passages. It’s not a route for the bunch. 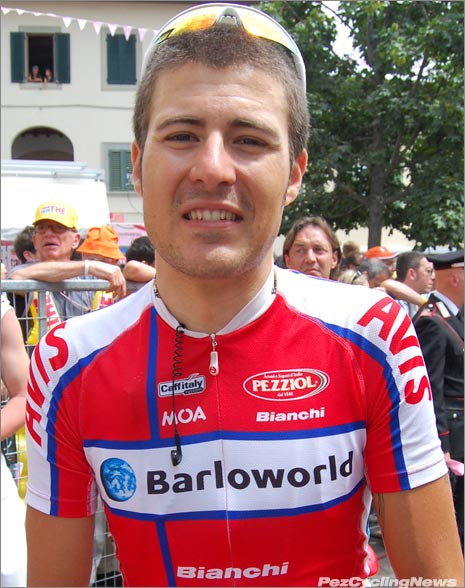 It’s time to plan another attack for Caccia.

So I meet Caccia, an Italian rider with the attitude to attack almost every day: “It’s a hard race. Everybody in the group is tired. Every day someone tries to move since the beginning and this is the reason why we always fly in the first hours of race. Yesterday too. I was one of the first to move and then we were twelve; but they caught us. Then the group left those four guys without hope just because they had no chances to arrive. – Today will be the same as Di Luca will work to close on the break to get in the good position on the San Luca.”

Visconti has the same idea: “Hard to move. I will try anyway. Hard to move and hard to get to the finish. It’s warm and many people are suffering on the plain. What it can happen on the climbs?”

Another always ready to try a break is Voigt. “I’m tired. I mean… it’s hard to be fresh after two weeks. Every day it’s a battle here and there’s no space. You need some luck to get on the good train.” 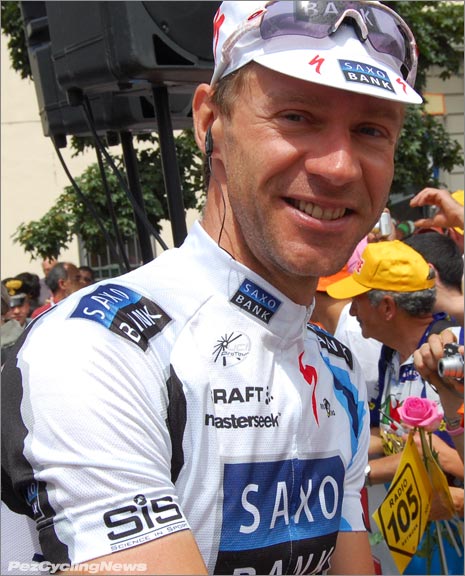 Voigt tired? His smiles say he’s not finished yet…

When the race takes its move it’s time to eat, but not for me. The way to Bologna is long and I planned to watch a passage on the third climb, the Valico di Tolи. It’s an easy climb and usually shouldn’t make the difference but this year the Giro has no Alps at the end. The Apennines will judge the race and this is the arena where the favourites will compete. I stop after four kilometres of climb. I would like to get to the finish in time and I can’t lose too much time driving after the passage of the race. There’s a nice wind but the air is warm. 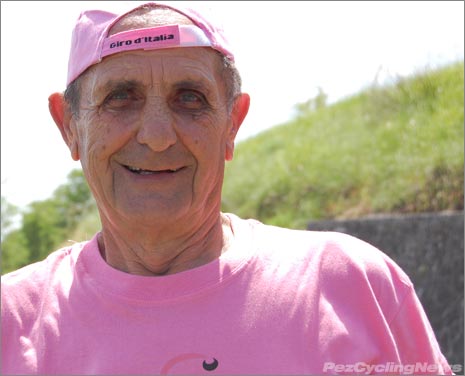 Waiting for the Giro, waiting for answers. This is Romano. Smile – you’re on Pezcycling now.

When I stop, a guy wearing a “rosa” kit (jersey and cap) stops me. “What is happening to Cunego this year?” – I try to explain that I have no ideas about Cunego. I’m a “Giro journo” and everybody believes I should have an answer. Luckily he doesn’t want an answer but he just want to talk. Romano – this is his name – is a very nice and it’s a good chance to learn something more about these places. “I like cycling but I’m a pro bocce player. Here the bocce is our favourite game and we can lose days to play that game. I live not far away – do you see that valley? – I’m 72 and I lived all my life in this valley. We’ve seen the war but we had many animals in our farm and we didn’t suffer the hunger.” 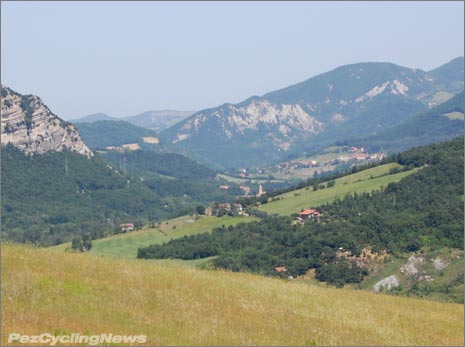 ”Can you see over there? That’s my valley; I live there my whole life – it’s another world just an hour to Bologna.”

Bologna is just an hour far from here but, on this road turn you feel really in another world. Bocce, farms and valleys. The Giro is coming. The Pez calls me from the village below. “There’a a break with Visconti inside – we will meet at the finish.” 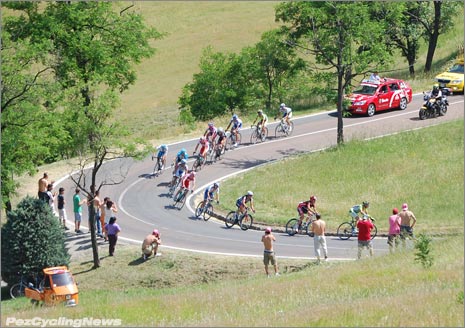 The break on the lower slopes of the Valico di Tolи.

To meet at the finish I have to drive like a crazy through villages, traffic lights and small local trucks driving so slow that you ask if they’re looking for a park. But, again, these are the Apennines. 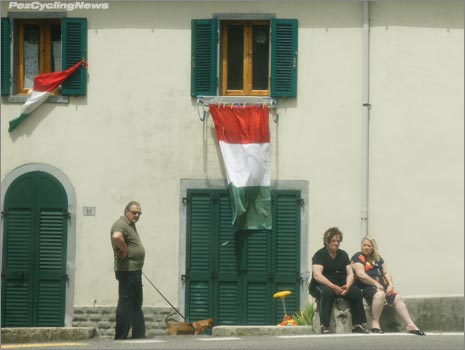 The Giro is coming, and it’s well worth the wait.

When I arrive in Bologna everything is ready for the great moment. The people are excited enough and the traffic is closed. I find the last shuttle to get to the finish as the final climb is “prohibited”. Too narrow and to steep. I never see so many people on the San Luca. Every year I watch the Giro dell’Emilia over there but today all the places are “completo”. 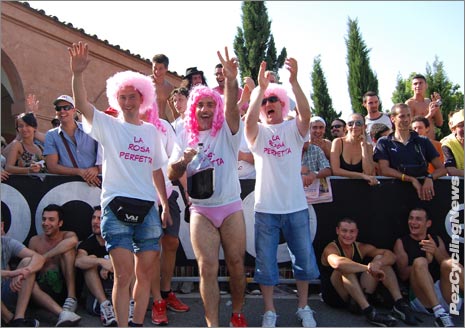 It’s the rosa day on the san Luca climb.

The arches are full and everything is perfect for the finale. The show is great but what I liked more is the big ovation the “tifosi” give to the last of the bunch. This is possibly louder than the one given to Di Luca. 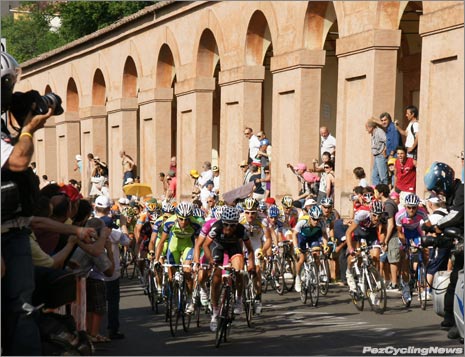 Now I’m here, writing this story beside the Pez. I will try to convince him to have another stage together, but it’s hard. I already understood – but he doesn’t admit – he’s got some good plans before coming back to the headquarter. Ok, Pez, leave to me for a couple of days the steering. Tomorrow again the Apennines and, probably, warm again.

Heading south to my places. The Catria is waiting quietly, for the moment. We have some road more and some more life to live. I don’t feel a stranger and it’s hard to think to my “normal” life. 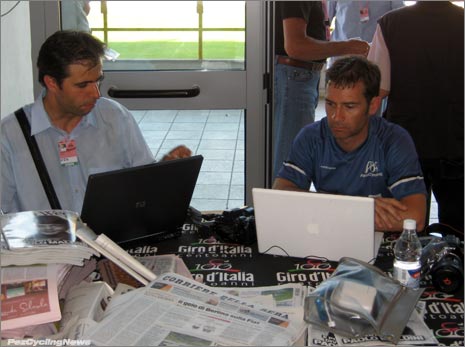 The PEZ-Crew on the job in Bologna.