Best Of PEZ 2010 Maybe I don’t have the words, perhaps it needs one of the old time journos, a JB Wadley or a Marcel de Leener – they could express things in the terms required for an epic such as this. But at the same time, whilst the organizers have created a grand spectacle, a saga out of Norse Legend, is it still sport? Does it go beyond that to sadism or freak show?

Martin and I debated if it amplified the luck element too much; but the first two riders on the slick grease of the strada bianche were Vino and Cadel, respectively winners of this year’s Liege-Bastogne-Liege and the Fleche-Wallone.

Cadel’s rainbow jersey was one of the few things which shone bright on this day that saw us bored for the first 200 K then mesmerized by the finale. 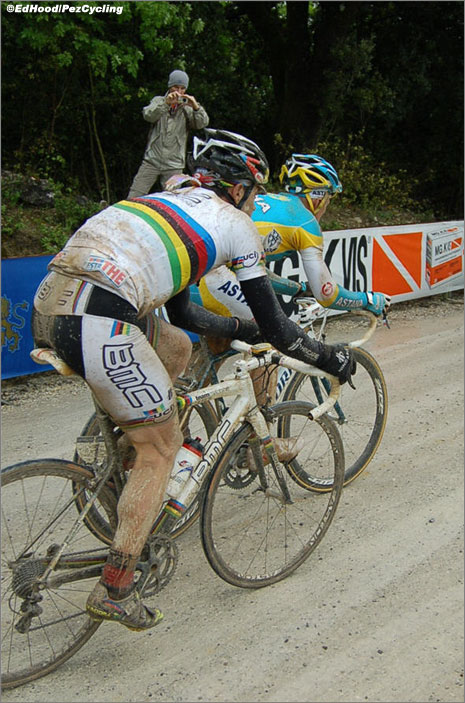 Did those last 20 K kill the race GC too soon? There are still two weeks to go and the likes of Sastre is at sea, already. But the sprinters have their day and slog uncomplaining up those mountains – surely the Ardennes Classic guys should have their day, too.

Back in Carrara, this morning, it all seemed so calm, so organized – just another Giro stage to cover.

I stare at the tiny camera on the PC, the girl says ‘OK’ and seconds later the little bit of pink plastic appears with my photo on it – those priceless creds.

No longer one of the masses – not there’s anything wrong with that – but part of the race.

Time for coffee – two in fact and a piece of mamma’s home made tart.

This is my tenth Grand Tour for PEZ but I’ve never met the man behind the website I’ve roamed Europe for; today will be different, he’s here with the family. 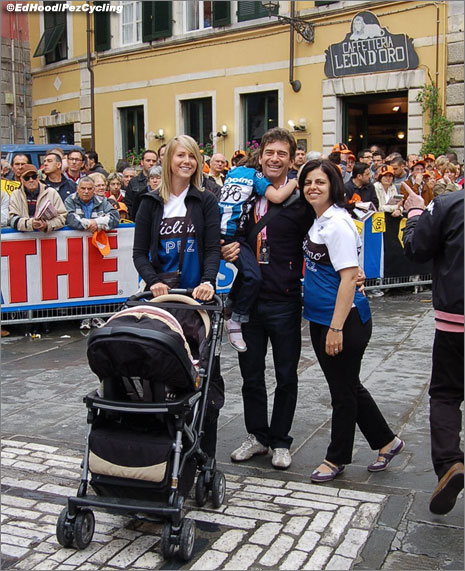 And as we arrive at the entrance to the villaggio, walking up the street, there they are, Pez and Co.

Our meet is all to brief, we’ve got strada bianche to stake out and have to hustle that Fiat south – Grand Tours catch you up very quickly if your stopping to take pictures. 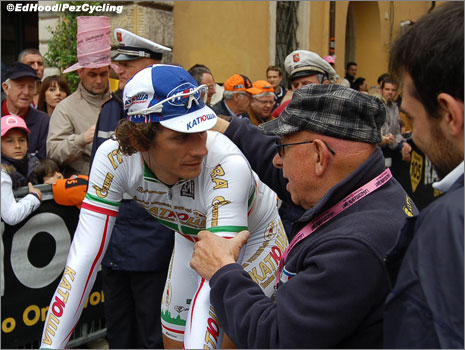 But there’s long time Pez fan, Rita Tanner – we have to say, ‘hello.’

And there’s ‘Pippo’ Pozzato, headed for the sign on, an old guy stops him; “do you remember when . . . he’s just so photogenic, you can’t not snap. 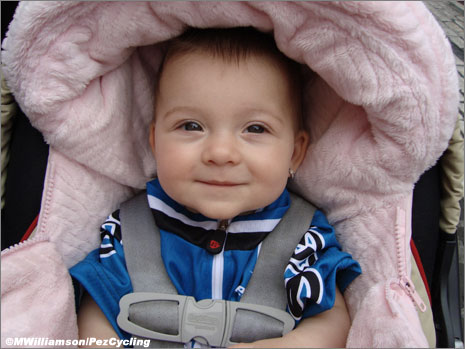 And now Italian TV want shots of baby Loredana in her pram – but we really have to go, there’s a bike race to attend to. 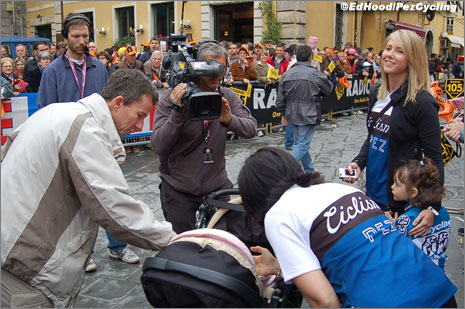 Long straight, flat, featureless roads south along the side of the Mare Ligure to Viareggio, where we spent the night, and then inland, flat again to Pisa.

One of the differences between the Giro and le Tour is under scored on these roads; whilst there are plenty of cops around, traffic flows freely in both directions – if this was le Tour these roads would have been locked down, drum tight, hours ago.

The first 90 K or so are bland, long straights, grey towns, clusters of fans sheltering from the rain. 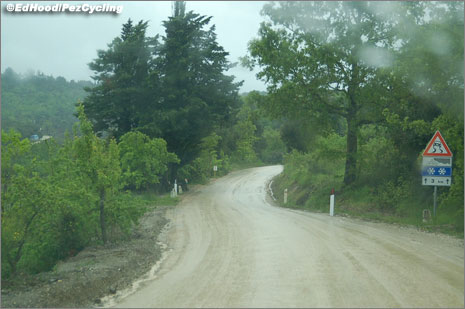 It’s looking very much like it’s going to be wet on the climb so they’ll need those 25mm front and 24mm rear tubulars inflated to eight bars with 39 x 23 ratios.

Half distance, ‘meta percorso’ – it’s very green, vineyards, olive groves, but very wet and not a fan in site.

Into Provincia di Siena and the hills get steeper but still the rain falls and the fans are watching on TV – they’re certainly not roadside. 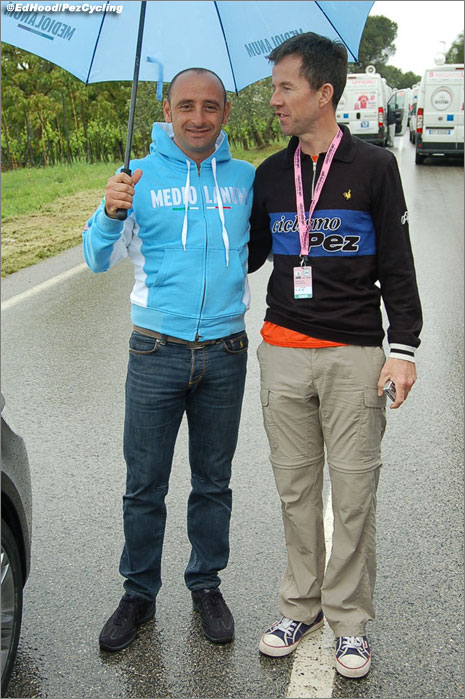 On the GPM 3rd category Passeo del Rospatoio at 184 K there are a few more fans but few photo opportunities in the heavy grey blanket that keeps the horizon very close.

We spot a familiar face – Paolo Bettini, he remembers me from the Grenoble six, ‘back in the day’ – there’s no stress in his life now, every day is a holiday and he’s eight kilos heavier than his racing days. Today is a day for Vino or Garzelli he reckons, too tough for Pippo; and Nibali? He pulls a face. He reckons that today is a good day to ride the strada bianche, the wet allows the dust to compact so it’s less dangerous than when it’s sun baked.

That helped the boredom. 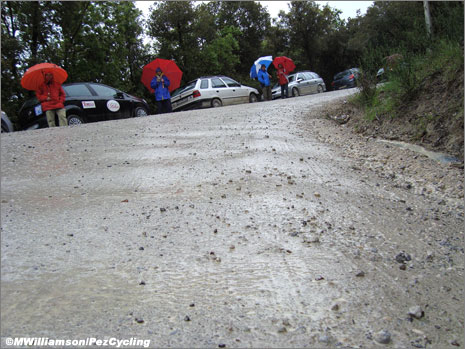 We contrived to miss the first, short sector of strada bianche, but; Bang! just after 20 K to go, the main section starts – dirt road, compacted grey/brown mud with a layer of gravel, there’s pot holes and huge camber, rivulets of water stream down, there are transverse ridges caused by vehicles changing gear at the same point on the evil hair pins.

At the 15 K to go sign the grade goes to 15% up through the poplars, the gravel gets thicker and the Fiat isn’t liking this hill.

We park up, maybe we won’t get parked on the upper slopes – we’d expected the surface but not the gradients or the hairpins.

It’s the bastard son of l’Alpe d’Huez mating with Paris-Roubaix. 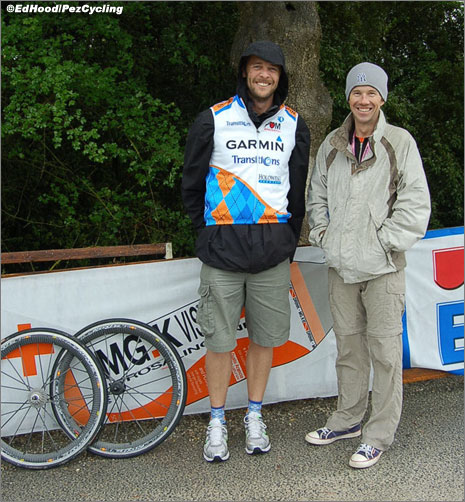 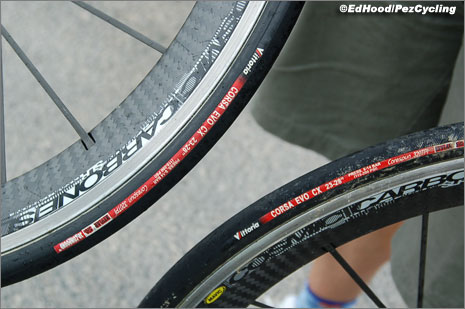 He’s getting updates on his BlackBerry – Garzelli, Vino, Gerdemann are clear with a lead of 1:17. The race is way up on schedule, at least ten minutes, at one point it was 25 minutes, they’re trying to end Sastre’s chances by putting big time into him.

We say our farewells to Toby and take up our vantage points ; there are fans up here, but it’s not at Tour levels and there’s plenty of barrier space.

The rain is unrelenting, there’s the chopper, the shoals of motor bikes – and there’s Vino, driving, Cadel is on his wheel. 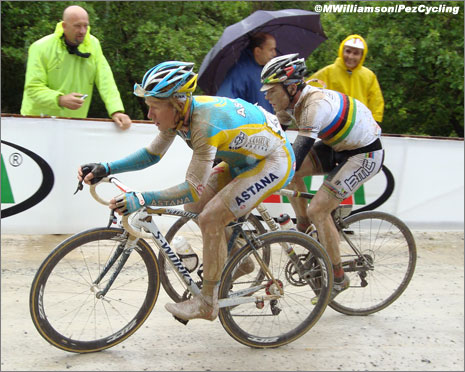 We’re unprepared for the state they’re in – like World War 1 soldiers. 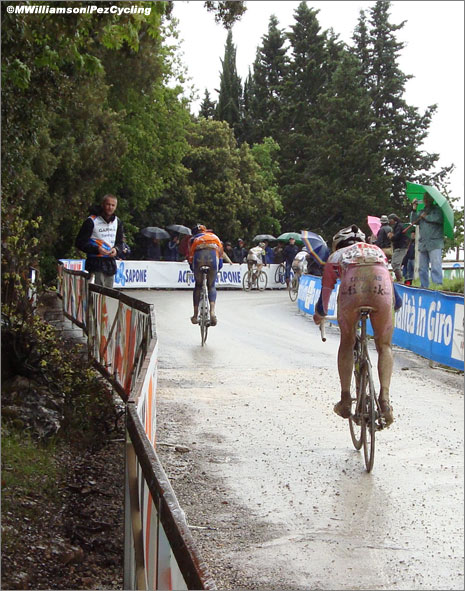 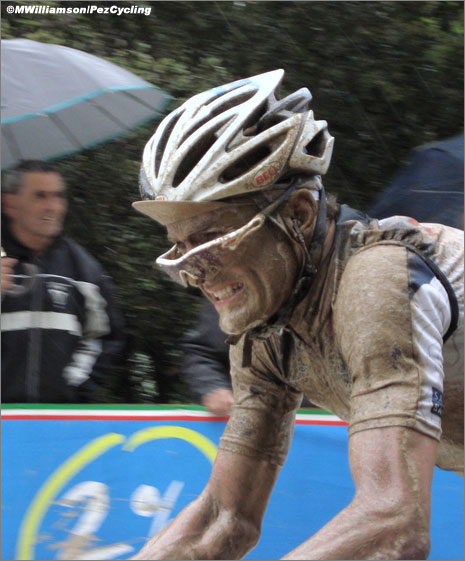 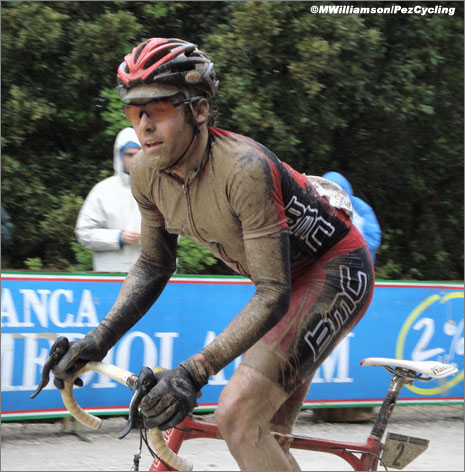 Adam Hansen grinds past, ‘go on, Adam,’ I bellow, he smiles and nods, he probably thinks he’s hallucinating. 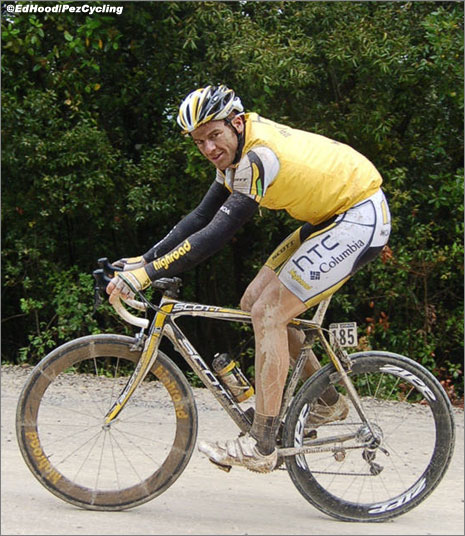 The grim cavalcade grovels past – Jered emails to tell us that Cadel has won and Vino is in pink.

They all deserve a leader’s jersey, today. 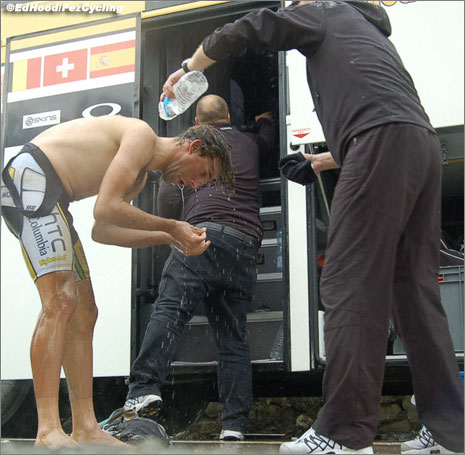 It takes us an age to get off the hill, we pass the Columbia bus at the finish – Aldis, their soigneur is pouring cold water over their heads to get the worst of the grime off before they shower – it’s a glamorous sport, all right.