BEST of PEZ: Ale’s Look Back At Il Giro

There’s no other sport that takes you so near to the everyday life. On the road you meet and mix with a huge variety of unselected people. Some are there to see the Giro itself, others losing time and waiting for the opening of the roads, and still others who just live there.

The Best of PEZ – To help make brighter these winter days, we’ve selected for your viewing pleasure some of our Best Stories of the Year. Who decided which of our stories from 2008 were the best? – we did! Through the next week we’ll present for your consideration some of the work we’re most proud of, and hope you enjoy one more look as much we do. Sometimes a glance back helps clear the path ahead. This story originally ran in June 2008.

The people have been the biggest surprise for me. Anyone on the road gives a contribution to the event. There’re not just the riders, but a big world where the riders are involved. 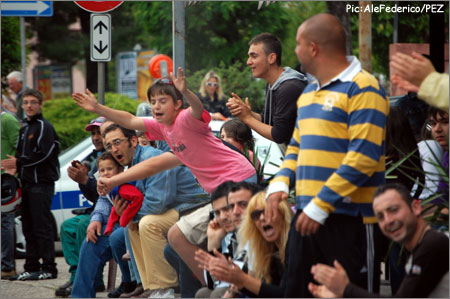 People are the most important part of the portrait. They’re coloured and full of joy during the race passage. It wouldn’t be the same without them.

Coming on the road is, at last, a reason enough to spend an unforgettable day. When the race passes everything finishes and the road returns to being just a road.

Another surprise were the riders. They are not Gods spending their time over the clouds. They’re part of the portrait. Their own stories are shackled together with the events and, most of the time, the events that overcome them. They also live the hurry everybody feels during the Giro chasing. There’s time for anything: no time for sleep, for eating, to have a quite coffee or a chat. 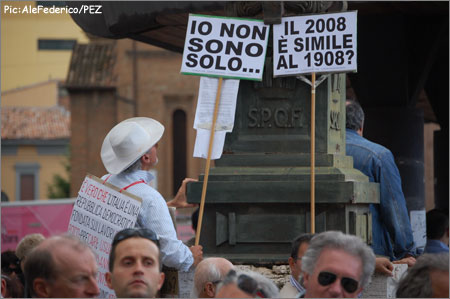 The Giro is an event catalyzing a lot of attention. Why lose the opportunity to declare your own opinion?

Every rider of the Giro lives his personal race against the other, against the weather, against the adversity of life. They also look forward for a better future, they hope to find their fortune on the same road where the every-day people work.

When I met Matthias Russ, during the rest day in his hotel, I found nothing more than a young man full of hope. He was just 34” from Visconti and he really was hoping to wear that jersey at least for one day. Then I saw him after the time trial, the following day. He was defeated and exhausted. It was raining and he had just arrived to the team car. I didn’t find the words to ask him anything. What to ask? Everything in front of me was so clear. The rain, his wet white jersey that didn’t turn to Rosa. His eyes, so different from the evening before. 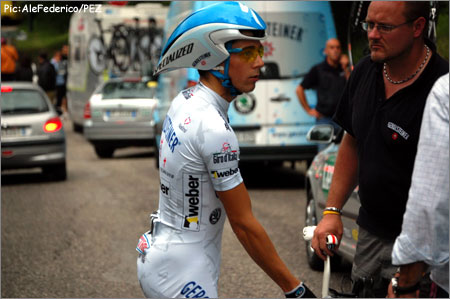 Still in white. It’s raining and there’s nothing else to say.

That evening I left Urbino with a local bus; it was the only means I found to return to Pesaro, where I left my car to follow Adam Hansen during his ride. There was a thunderstorm on the sea, and a long queue of cars blocked in after the race traffic. During the trip, I wrote my report, and I was feeling as if I had been the witness to the most touching story of that part of the Giro, but I didn’t make a word of it. 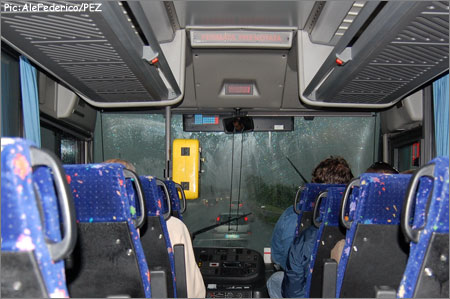 A wet way back. A long queue, a story to tell and one to hide till the right moment.

I’m convinced that any story has its own time. This is now the right time to tell about Russ and the rain.

This is also the right time to tell about the madam and the cherries.

The Giro was arriving in Cesena and I was looking for a good place to take the race pictures, when the woman asked me to take a picture with her roses, “You’re here for the Rosa jersey, Aren’t you?” She was joking with the words confusing the flowers and the colours. Always the people hope you’re a reporter of a local newspaper and ask to you to publish them, to mention them, their placards, their opinion. This lady just asked for a picture and nothing more. Without a clear reason. I did it and I congratulated her for their beauty. 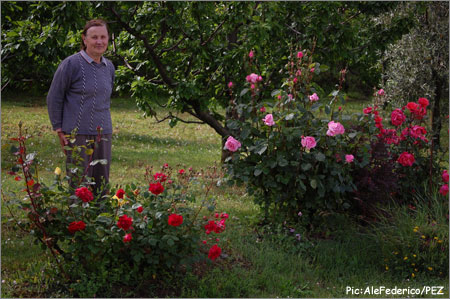 A woman, her roses, the cherry trees and an opportunity to really talk together. Then we’ll be strangers again; the Giro has gone.

Then I made some words about the weather and the incoming race event. We were in her garden, full of cherry trees. They were gorgeous and full of fresh fruit. I asked about the cherries and just after my question she told me these trees were the proud property of her husband, who had died few days before. “I’m desperate”. Again no words to say. Everything in front of me; the roses, the cherries. I still don’t know why she asked a picture of me, and why she told me about her husband. I think she opened up just because I was part of the Giro and she was feeling confident in the event. 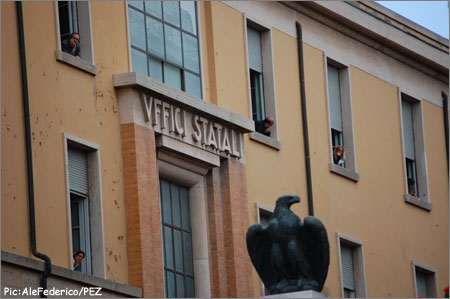 Ahh, some rest time from the desk trouble. If you’re working for the Administration what an especially good opportunity to waste the morning looking out of the window.

If you’re Italian, the Giro is something you can trust in. It’s a story you’ve listened to since you were a baby, and every year started again. You’ve probably seen it for the first time while you were holding the hand of your father. This race is a common part of our life and our tradition, so for the working people it is just part of their family, regardless of their real identity. 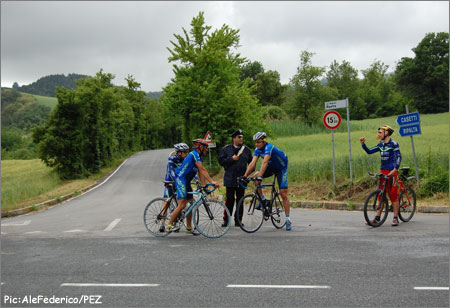 It’s time to socialize with the law. “Let’s have a drink” – the cyclist tries to corrupt the Carabiniere.

Everybody on the road has a reason to be there. Everything is confused, just as real life is. Some can find their own way and for others, it is an obstacle they must overcome to reach their target.

It’s almost a week now, that I’ve been out of the Giro d’Italia, but I still happen to wake during the night listening for the happy screams of the people and the rolling of the wheels. My wife looks at me desperate as she understands that she can’t do anything. Just wait for the end of the story. As with any year, the Giro will finish and I will softly be back to my life. The roads will return to being just roads, and the roses won’t be confused with the Rosa anymore. 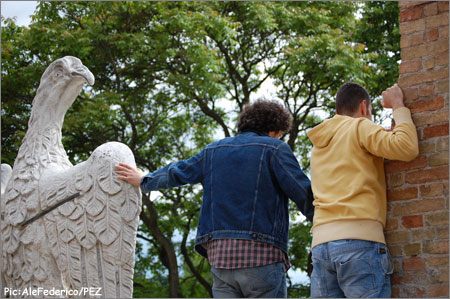 Any place is good to see the Giro. Regardless, if it’s dangerous or you would never do it. It’s time to do it!