Roadside St.2: “2 other pix …… maybe pick best one. I’m too pie-eyed to tell now. Have a look at the measures he was pouring!!!!” – So read Gord’s email last night. I could tell by the photos that Gord had found his place at this year’s Tour…

The Best of PEZ – To help make brighter these winter days, we’ve selected for your viewing pleasure some of our Best Stories of the Year. Who decided which of our stories from 2008 were the best? – we did! Through the next week we’ll present for your consideration some of the work we’re most proud of, and hope you enjoy one more look as much we do. Sometimes a glance back helps clear the path ahead. This story originally ran in July 2008.

Last night got me thinking on how to people treat each other, and how that fits into the Tour experience. Last night, I got to know a little about the heart of the real Brittany and the proud hearts of the people who live here. Like my new best friend, Denis.

It had been a long night, fighting with the computer so I was only heading out to eat around 9.30pm. Not much sign of life in Pontivy (on the stage 2 route), even though the village will be most definitely ‘en fete’ as I write, with the Tour about to fly through. 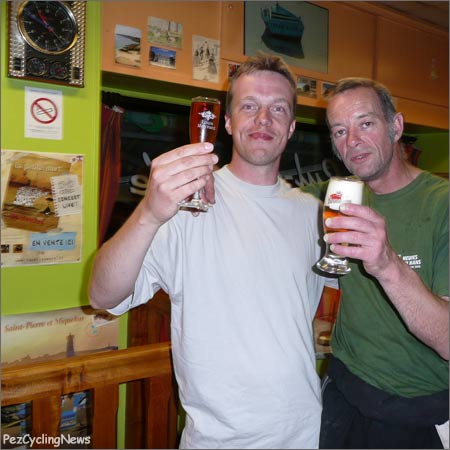 Gord and his new best bud Denis – ! Note the clock – almost 11PM, and there’s also a poster for a concert from a local French band called “Le Petit Morts” – which I suspect will leave the audience feeling very good.

I settled on a little ‘restaurant Breton – crкperie’ called Le Cul-de-poule …. cool name! My French is not great but enough to order my omlette and a glass of Chouchen – more of that later.

As I was finishing up, three girls walked in and sat down. Denis spoke to them in French – no response. Then he tried English “Where … do … you … come … from?” The attitude that came back was baffling – the kindness of a stranger repaid with: “Does it matter?”

Denis comes back calmly. “Do not worry about the menu, ladies. You may leave my restaurant. You will not be served.” How he stayed civil, I don’t know. They left with a sneer … 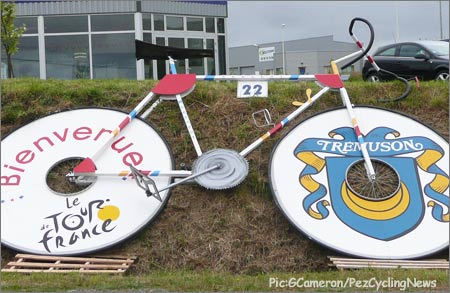 Denis turns to me: “Where are you from? It doesn’t matter because we make ourselves understood with a smile.” So we struck up a conversation, and Denis explained that this tiny restaurant, was basically a room in his house. “I am a free man in a free house.”

“I was born in this corner, I am proud to stay here and I will fight for it, but I welcome the world to it.” The customers sitting at the bar have been coming for years, and are firm friends – Sylvain for 14 years, another lady for 20 years. This was a real community heart, not some tourist eaterie.

By now, I’d finished my glass of Chouchen, a potent knockout drink made from honey – think hot and sweet on the pallette. A pretty fiery, acquired taste. Denis steps back from behind the bar. “Another glass? For you it is a gift.” 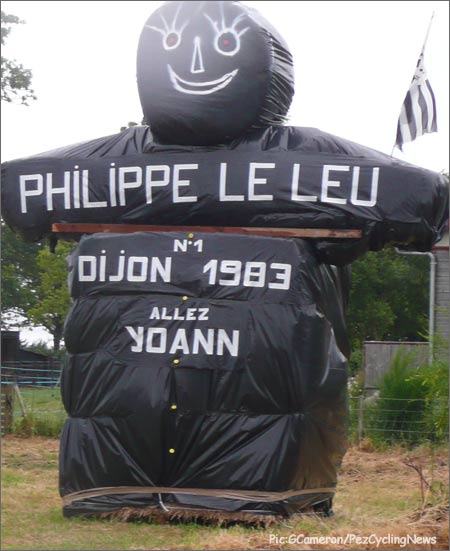 Made of isilage, strong and sturdy, just like a Breton should be.

And what a gift – look at the measure he poured out! It was enough of an effort not to spill any of it. Denis refilled his own glass, and his young assistant, Sebastian, snapped a few pictures.

We chatted about Breton pride. Denis doesn’t speak the language, or dance or sing or play traditional music. But he was proud of his Breton heart. It’s not a way of doing, (was basically what he indicated) it’s a way of being: “We are wild people here!” I’m sure he meant wild at heart.

The motto on Denis’s card says: “Y’a pas d’heure pour les braves”, which he assured me meant something like “Now is the time for the brave”. That’s what’s starting to hit home on this Tour. It’s brave to be proud of the race, even after it’s slapped us all in the face so often. It’s brave to keep justifying why we love it. 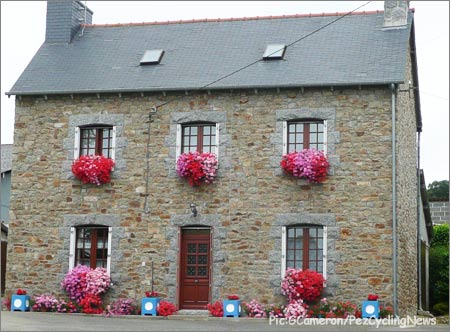 Even the Breton house’s look strong – like this one in the village of Plerneuf.

And, in his own brave way, Denis is like everyone that comes out to support the Tour. I passed a woman, sitting on the edge of a ditch this morning, reading a book. I’d just headed out of Neulliac and there she was – six hours to race time. Hope it was a good book.

I didn’t get time to snap a picture, but she’s as visible a symbol of cycling passion as Didi the Devil. I did see him, but he was having a ‘natural break’ by the roadside, so thank me for sparing you any graphic imagery!

This was my first time driving the race route, and it’s an obstacle course of immense proportions. Following the arrows is the easy bit – it’s concentrating on avoiding everything else that’s the problem. Bikes, dogs, kids, camper vans, pedestrians with a death wish. 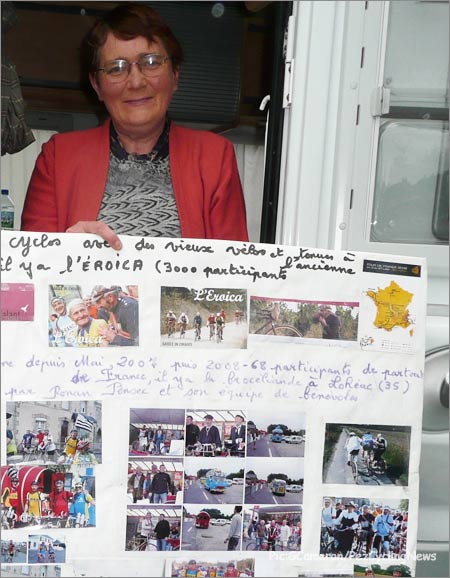 Talking of campers, this lady had a full-on display of Breton cycling heroes, taped to cardboard displays. I was about to snap Louision Bobet, when she stopped me and came out with a more up-to-date display. Later on, I saw a similar Bobet picture taped to a Rabobank van – how to win friends in Brittany! 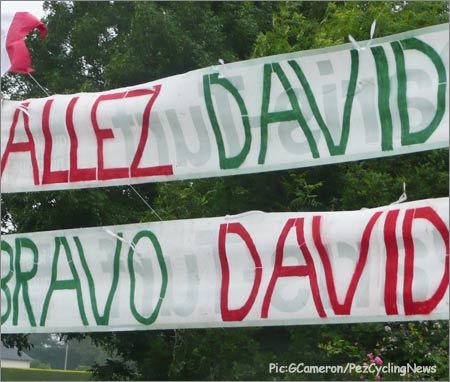 If fanaticism alone was enough to win, Le Lay would be a shoe-in for the Tour podium at least.

As this is the Cфte d’Armor, I thought I’d better grab some pictures of all the signs for David Le Lay – he’s just moved up to the big time after a sensational run with the local boys Bretagne Armor Lux. If fan power can inspire, today should be a straight fight between Le Lay and Christophe Le Mevel – their names were chalked all over the shop.

I had a brief chat with an old guy by the sign. A fan of Le Lay. “Oui …… bien, bien.” Then he grabbed my arm and pointed me to a sign further down for a race held with his heroes – among them “Merckx-uh, Janssens-uh, Guyot-uh”. 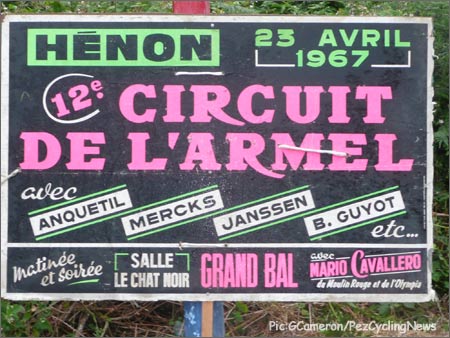 A misty eyed old man was keener on the old favorites, rather than today’s generation.

Check the spelling of Eddy’s name – obviously he wasn’t quite such a big deal back in 1967! I thanked him and jumped back onto the road, looking for weird and wonderful things to photograph on the way to Saint Brieuc.

The giant silage man is a reference to local pro Phillipe Leleu who rode five Tours back in the 80s, but the support from this chap is going to another of today’s Costarmorican heroes, Yoann Le Boulanger.

There’s beautiful houses all around, but I wanted to push on to get to the Salle de Presse, so there was only time to shoot one or two pretty things for you. (Stay tuned for some distractions du jour ~.) 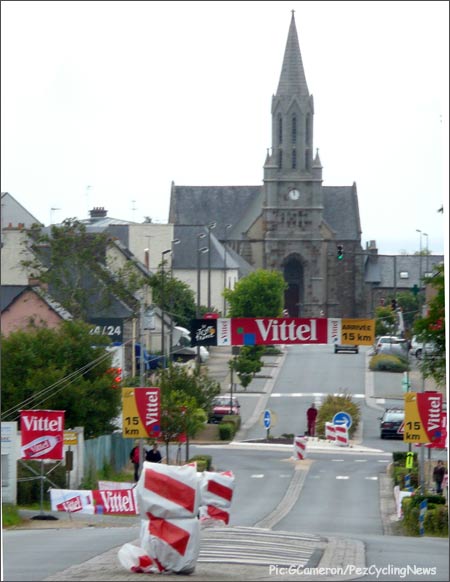 15kms to go, and it’s an eerie scene – the banners are up, but there’s nobody home …. yet. Just around the corner, a sign to welcome the peloton to Sebastien Hinault country. 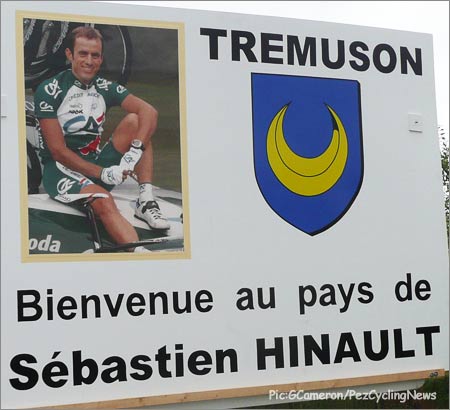 And then I encountered ‘Le Blaireau’, the badger, back in the saddle. It’s not Sebastien’s more famous namesake, but a slightly eccentric tribute to the greatest Breton of them all, Bernard Hinault. 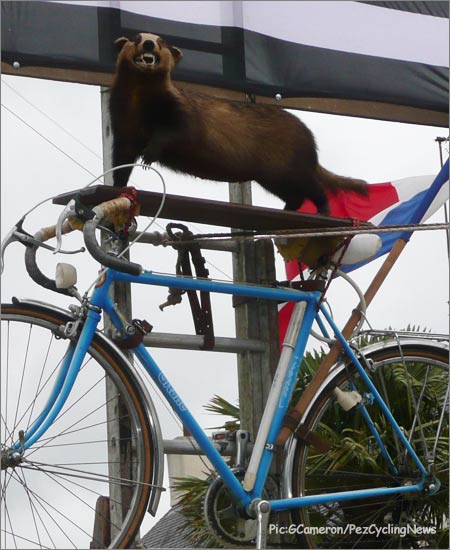 And of course, I’m thinking about Denis. Those are the experiences of a real Tour de France. Hope you’re enjoying the ride.

BEST of PEZ: Ale’s Look Back At Il Giro