Best of PEZ: In The Badger’s Lair!

Best of PEZ 2011: The badger, an animal renowned for fighting when cornered, was always a suitable representation of Bernard Hinault’s spirit. The five-times Tour de France champion took his defeats, his injuries and his setbacks and returned snarling to combat. On today’s route from Carhaix to Cap Frйhel, with numerous potential disasters waiting to trap the peloton, Yffiniac was the only place to visit. The birthplace of Le Blaireau, the legend himself. 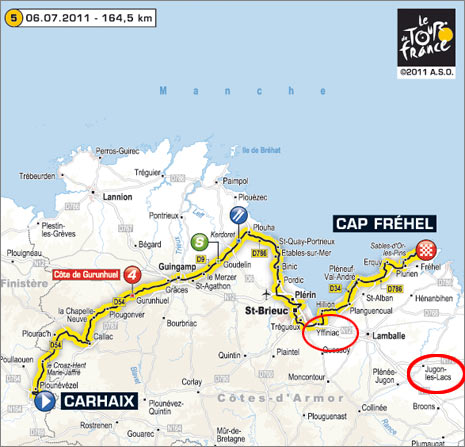 Of course, it seems that cyclists used to shout “Blaireau” to each other in Hinault’s neck of the woods anyway. Just a friendly greeting and nothing to do with the animal’s sometimes aggressive nature or Bernard’s determination, but the nickname stuck. 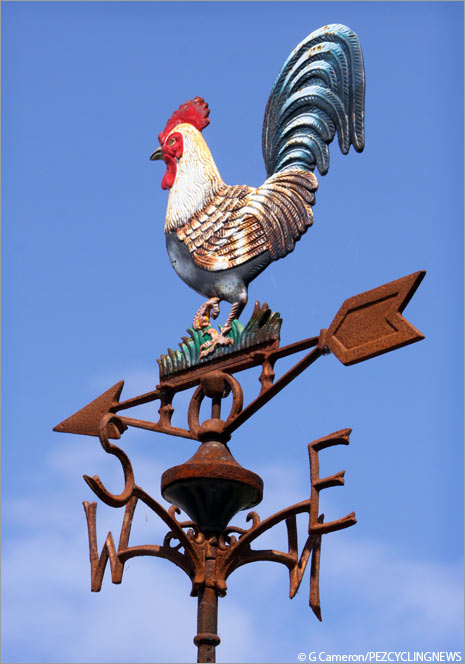 East of Yffiniac: We pull off the N176 in search of something a little different. The pundits have marked this stage as a day where the wind could play havoc, catching out the inattentive. The weathervane wasn’t having too hard a time standing still before noon, but the gusts came sweeping out of nowhere later on as the sun and clouds fought a continual battle overhead. 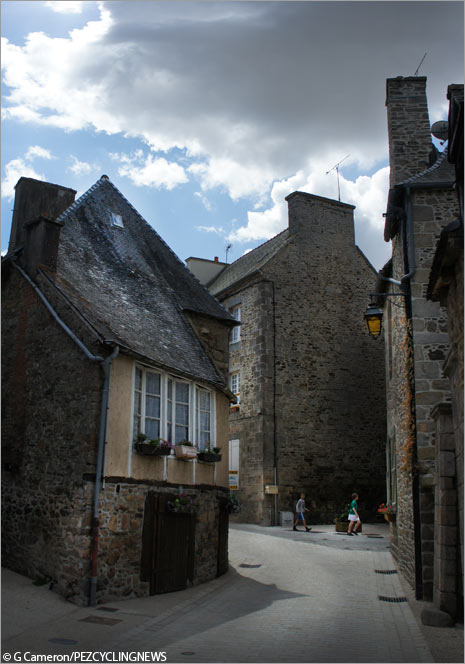 Our first port of call was Jugon Les Lacs, a town that is a model of mixing old and new architecture. A bustling town square with creperies, tabacs and magasins, and quirky, centuries-old side streets twisting off at acute angles. 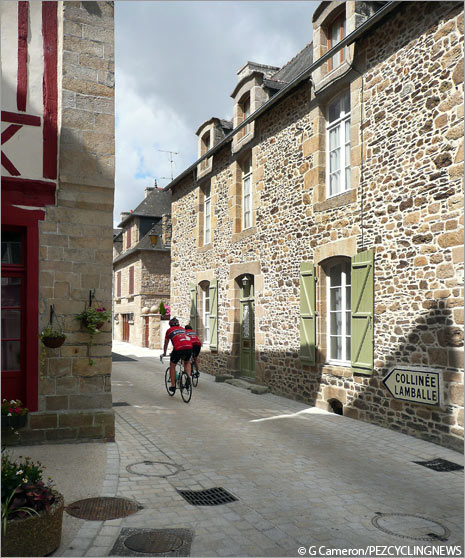 The weird geometries of the town were striking, the roofs somehow staying propped on the old houses like too-small hats on drunken Christmas revellers. We saw the same cyclotourists, more than once, gingerly promenading around in amazement, looking up more than ahead. 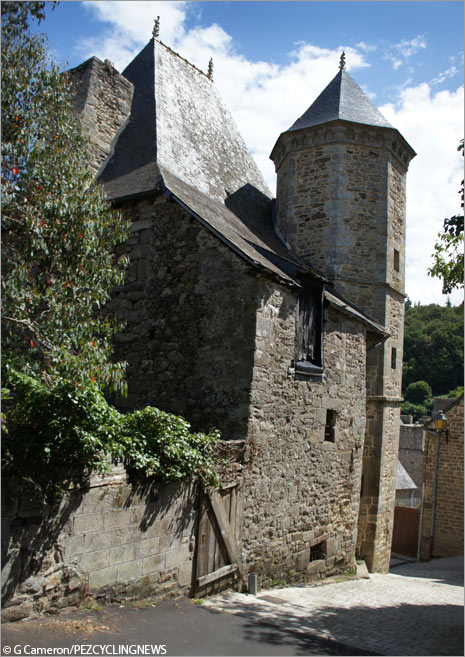 Up around a bend, the Hotel du Sevoy is hunched on a small hill with beautifully peeling paint clinging to the back door. The now-fuzzy carving on the door lintel gives away its neighbour’s age – 350 years old. 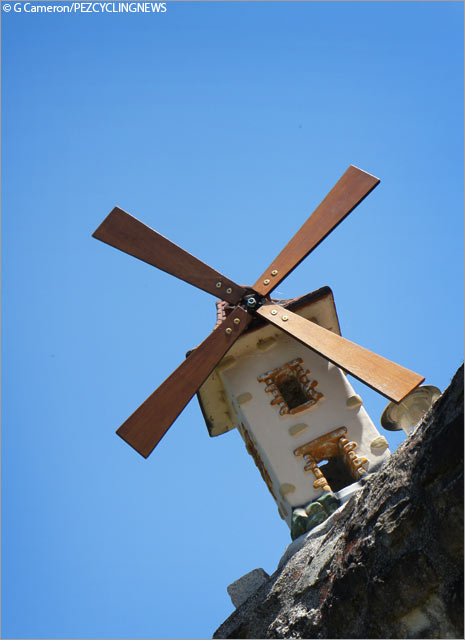 The town is stunningly kept, with barely any refuse skittering along in the breeze. Everywhere, just as it would have been in the town’s heyday, are reminders of how the weather influenced all aspects of life when existence itself was married to the soil around you. 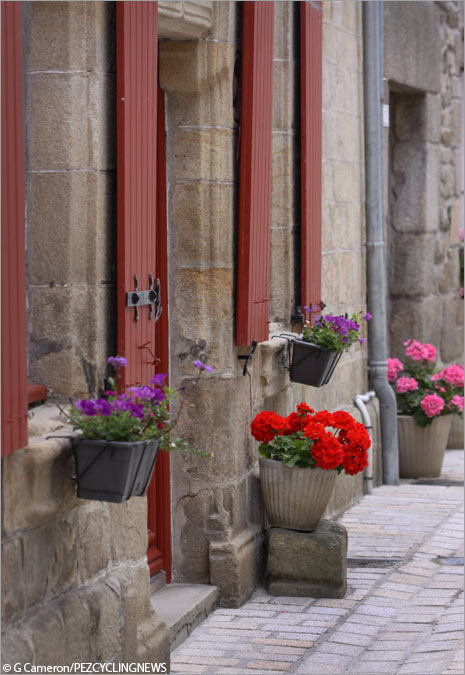 The town might not be on the Tour route but it certainly got itself noticed. The little gardens are rustic but productive. Peeping over walls we see pears, plums, apples. We’ll be back. 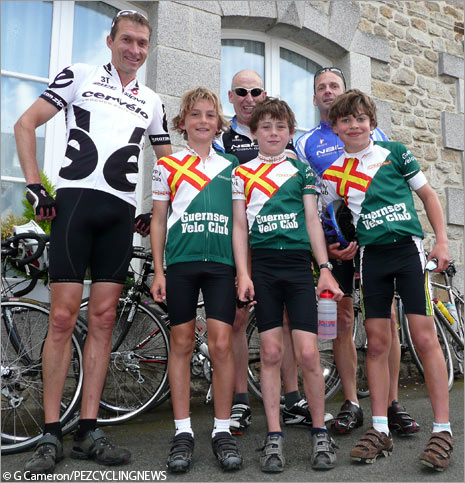 The Guernsey Velo Club, from the Channel Isles (either British territory or French by right, depending on where you come from!) were having a fine time. One of these little guys had Magnus Backstedt’s autograph on his shirt, from Magnus’s appearance at a criterium on the island.

His pal had an equally valid memento of meeting the Paris-Roubaix winner – a massive cut on his head from hitting the deck of the genial Swede’s cafй floor! 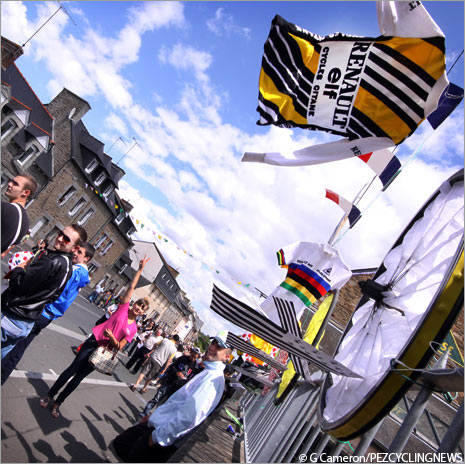 To Yffiniac. The local lads loiter insouciantly. Caps worn as high as possible on the head, cigarettes dangling as low as possible from the lip. No smile for the camera. Hinault’s influence? Maybe. They’re not doing it to please anyone but themselves.

His presence is everywhere in this town, and a fantastic collection of vintage Hinault-era maillots fluttered on a fence wire: Renault-Elf kit, world champion’s bands, the maillot jaune. 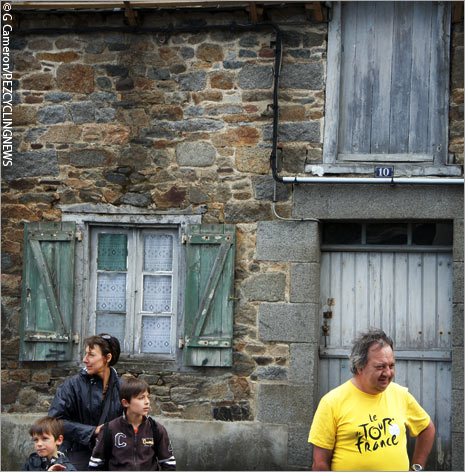 We took up station on the main drag to see the world go by. It could almost have been anywhere except for the images of Hinault proliferating. An older lady flagged us down when we took this picture. It turned out it had been Mademoiselle David’s grandmother’s home and she pushed the door open to prove it. By the frontage, it looked like it hadn’t been anyone’s home for a long time. 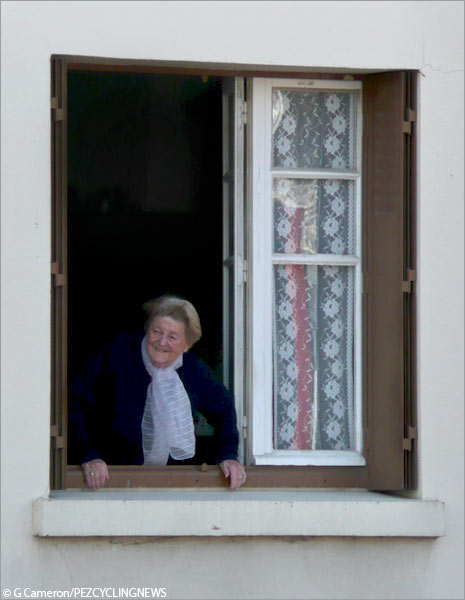 Vantage points are being taken up thick and fast for the show a good two hours before the caravan’s arrival. The mobile disco guy loses the crowd a bit when he switches from traditional Breton accordion music to generic Europop, always a bad move. Spits of rain graze the pavement, chill winds whip round the corners. 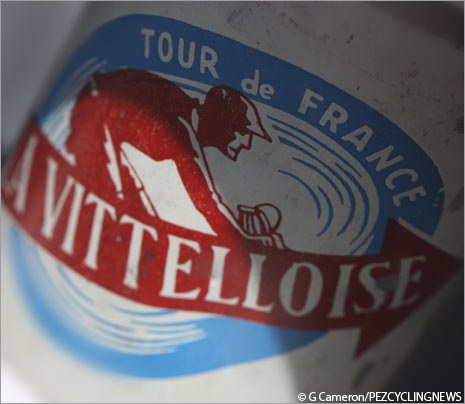 One homeowner had made an incredible effort to celebrate the Tour, turning the front windows into a shrine to the sport and it’s heroes. Original souvenirs included one of Louison Bobet’s bidons from the 1950s battling for space with a much-handled leather wallet bearing the brand of Charles Pelissier, one of the legendary cycling brothers of the ’20s and ’30s. 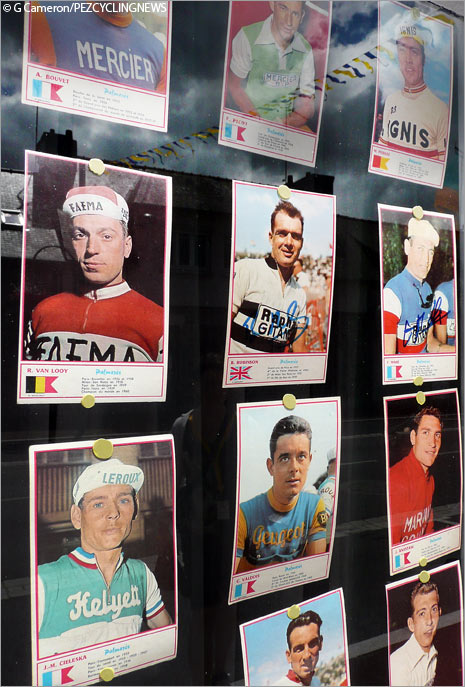 A signed Brian Robinson promo card, the first Briton to really make a mark on the European peloton, sits proudly behind one pane of glass; other items are Blutacked to the frames. 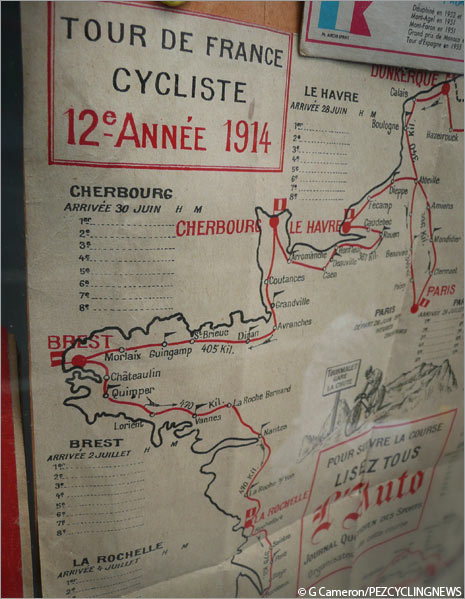 The Tour has been coming this way for a long time. 97 years ago, a much longer, much harder stage rolled clockwise to Saint-Brieuc, just up the road. It was always a commercial enterprise, but back then Geo Lefevre and friends, who got the whole thing started, couldn’t have imagined what 2011 would look like. 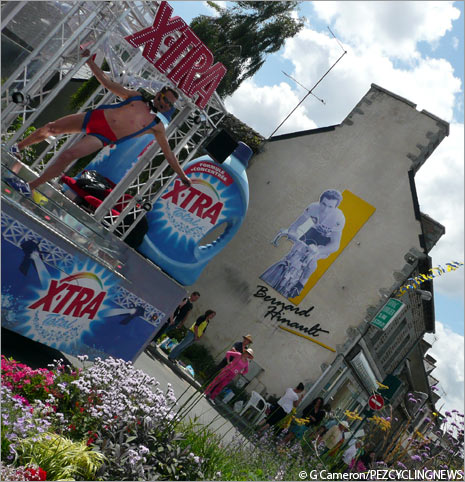 Hinault gazed balefully down on proceedings as the Xtra male poledancers gyrated past. Valerie said that two kids next to her looked at each other – they weren’t digusted, confused or excited. It was more a case of: “Why?” 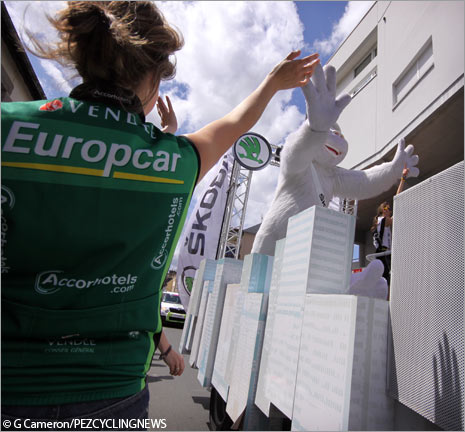 Cyril Gauthier from Europcar got his very own ‘Allez’ banner right in the centre of the rond-point. He’s from just up the road in Trйgueux, a local boy who’s made it to the Tour. His little fan club got wrapped up in the whole caravan experience as it tooted through town. 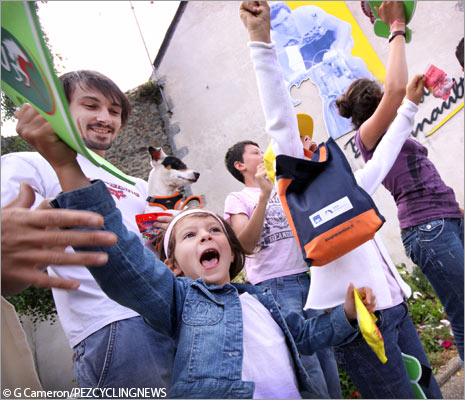 It’s a parent’s delight and nightmare at the same time. Free, full-color, multi-sensory entertainment for your kids, but you have to keep them from bolting into the road or just getting sick from the excitement. 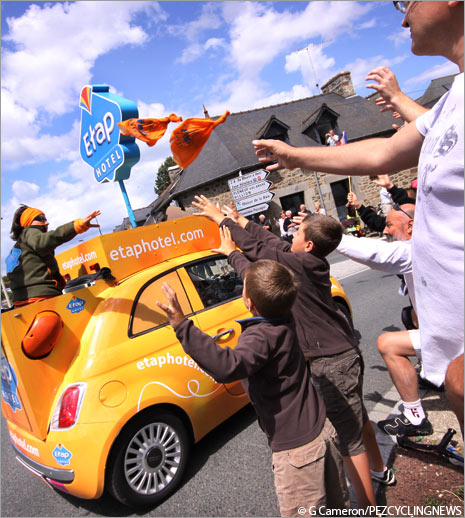 The Etap hotels crew screech past the roundabout chucking out nightcaps like the world’s about to end. A chunky middle-aged spread of a man grabs one out of the air and jams it on, but then sees Valerie’s raised camera. He promptly whips it off again, stuffing it in the first available pocket. 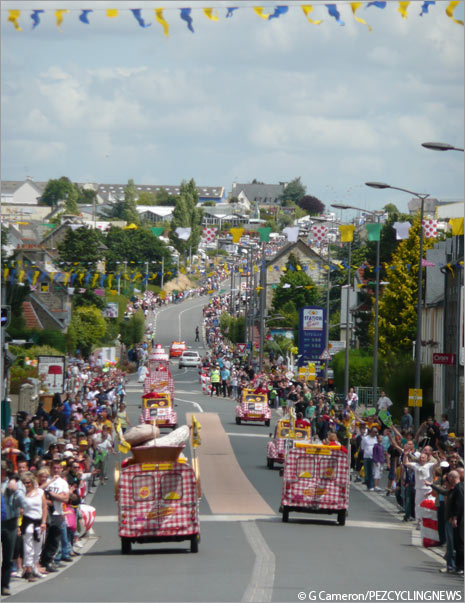 They’re gone. The whole processions takes about thirty minutes and flies off to sprinkle a little magic in Licellion, the next town on the itinerary. 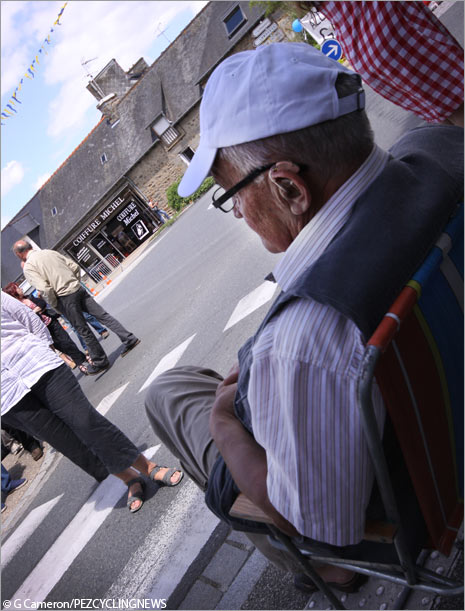 Calm descends for a time. At very regular intervals, a devoted wife relays to her husband that nothing is happening, nobody is coming yet. No need to get up. 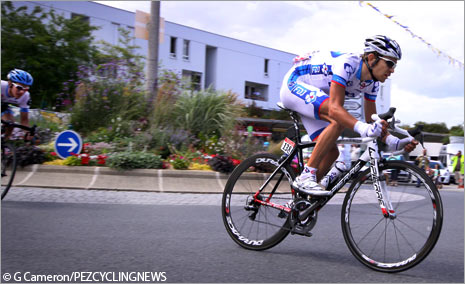 The bright sun vanishes again as a bitter blast of air tears right through the middle of town. A protective barrier blows of a kerb and a fan leaps into the road to corner it, plonking himself down to stop the recalcitrant plastic making another dash for freedom. Francaise des Jeux are on the front as they take the right of the roundabout seconds later. 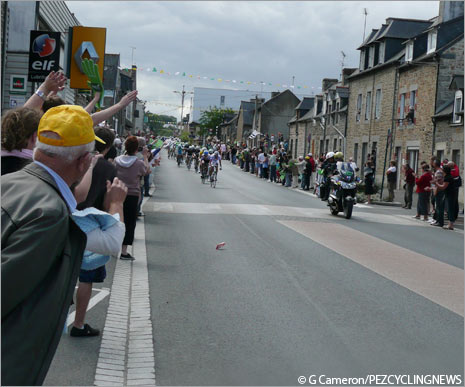 It’s full-bore, right down the centre of the street. 42kms to ride and they’re not messing about. Hushovd is fourth wheel, and it’s one long line. The aim is clear – keep it fast, make sure no one gets away. 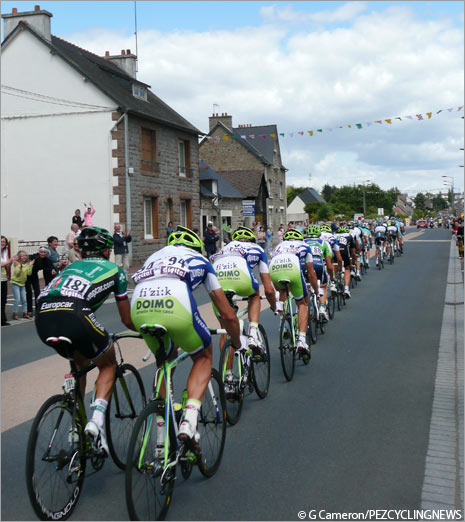 The hero of the Vendйe, Thomas Voeckler, is lurking down the back of the peloton, saving himself for what would be a brave but fruitless attempt at a late breakaway. 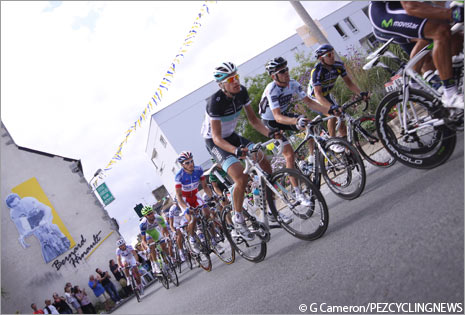 Another rider of whom I’m sure Hinault approves is the current French champion Sylvain Chavanel, tucked out of harm’s way and waiting for his opportunity. 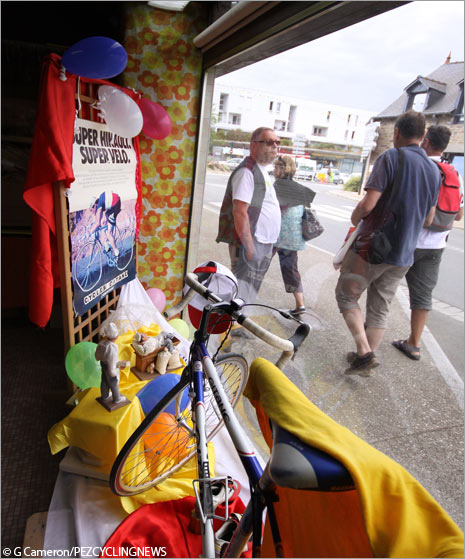 As the race disappears, I take Bernard’s poster as an endorsement and grab a couple of lovely lemon tarts from a patisserie followed by a wander over to the Bar du Stade to see what’s happening on TV. Boonen is in full focus. 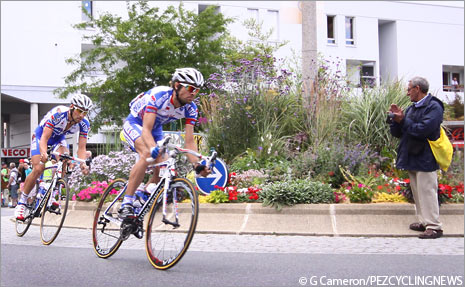 I step outside and he’s just being towed past by a desperate team-mate. Valerie isn’t so gluttonous or lazy and has maintained her position to catch this shot as normal life begins again in Yffiniac. 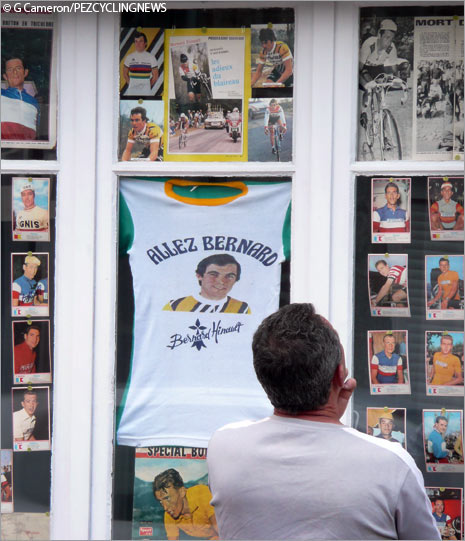 Although people looked like they were trying to get their regular heads on again, the Tour had been and gone, the chance to reminisce was too great to pass up. A father calls his wife and son over, talks them through the tragedy on Mont Ventoux in 1967 when Tommy Simpson passed away, and then lingers on the card of Jacques Anquetil. 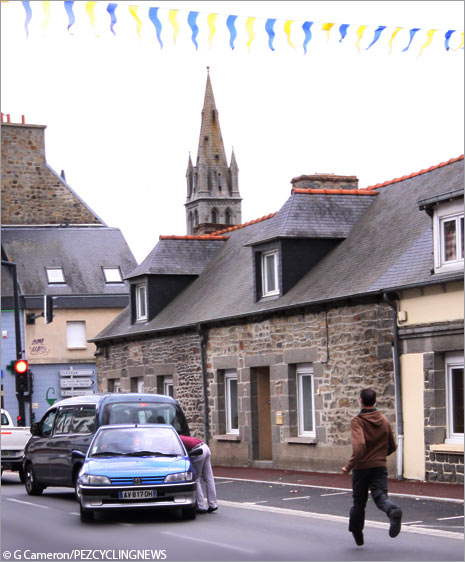 Was the Tour responsible for the last thing we saw before leaving Yffiniac? Maybe. I thought I was losing it … why was that car rolling backwards, elegantly down the wrong side of the street? With no driver? The businessman heading home realised and took four running steps into the road, but, laptop in one hand and groceries in the other, couldn’t intervene.

When the mortified driver bolted onto the scene, he should have thanked his stars it wasn’t Hinault climbing out of the other auto.