Bloke in France – Nationals and Motivation

After half a year away, we find our Bloke this week hard in preparations for re-invading the British Isles for the National Champs. In between, James finds renewed motivation for racing amidst the recent dark cloud hanging over his more famous countryman…

So here I am, still in France just over one year since I hopped over the channel to chase the dream. Not a lot has happened out of the ordinary since my last entry. I’ve continued the normal routine of racing and training. There haven’t been any outstanding successes but there haven’t been any failures either so the season plods on as my experience and strength grows. The team is pleased with my development and performance so it looks hopeful that I should be sticking round this neck of the continental woods for the foreseeable future.

Right now I’m in the final stages of preparation for my National Championships. These take place in a few weeks on July 25th. I’m working hard and it should be a good opportunity to see where I’m at compared with the other British Espoirs. The funny thing is that a significant number of the big contenders are fellow ‘Blokes In France’. It certainly won’t be an easy race but I know that I will have done everything I can to be at my best on the day. I figure you have to control the controllable and let everything else take care of itself. It will also be the first time I’ve been back in the UK since the beginning of January, and the first time I’ve raced there for over a year.

So things couldn’t be better right? Well, not quite. One event which did rock the boat was the news that David Millar was under investigation. Initially, I was gutted. He was always a kind of role model for me and I know some of you readers out there probably thought and think otherwise but he was a pretty cool guy. When I found out he ‘went to the dark side’ it made me question the sport, where its going, what it means to me, why I’m putting myself in this harsh environment and setting myself up for a career in the cut throat world of professional cycling. I was disillusioned, and to an extent demotivated. Well, after mulling over this whilst sipping a cafe I thought ‘forget it’; forget the doping problems, forget the shattered illusions and rumours of corruption. The sport is very simple, its about pedalling circles, so that’s what I did. I drank up, walked out the cafe and got out on my bike. I know where I stand. I’m clean and that’s what’s important. It’s that phrase again, control the controllable. 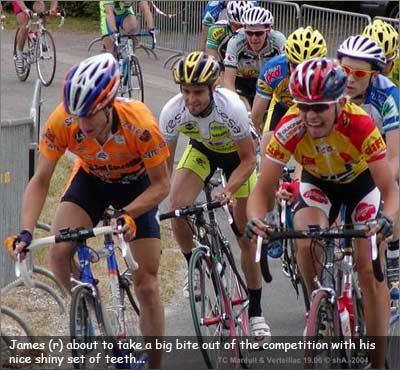 This is a beautiful sport. It’s like no other. Its not restricted to a court or a pitch. Its about freedom and passion and speed. Just remember that when your watching the Tour this year and when you get out and go for a ride. That’s what I rediscovered in the midst of recent events, and I think a lot of fans out there need to realise this as well. Yes the sport has problems, and sticking our heads in the sand isn’t going to fix them, but that doesn’t mean we have to dwell on those issues all the time. Cycling reflects life in many ways and therefore we get some negative aspects to go with the positives; but that is why this sport is so great, because it’s real.

No Olympics For Armstrong

Testing the… “LAZER” and CATLIKE