Bloke: The Training In Spain…

This week’s underling epistle lands from James Hewitt, our own English Bloke In France, chasing his dream of a pro ride, and suffering like a dog along the way. We join James after a recent stage race in Spain…

Our story begins…
Actually, I am a bloke in France once again, typing this report on a French keyboard trying to find the letters I need. Last week I had started my 2004 campaign with a crazy series of races and training sessions in the North of Spain with my new team, CA Castelsarrasin.

Day 1 – All Crash!
Everything cracked off last Saturday with a 154km race from Canet in France to Blaines in Spain, followed by a race the next day along the same route in the opposite direction. The first race started well but turned into a bit of a nightmare following me crashing just after the Spanish border at about 60km/hr when two guys in front of me decided to do a tarmac inspection. Fortunately I came out all right but the poor guy who broke my fall ended up with a broken wrist.

His luck got worse when after 5 minutes searching for a spare wheel I took one from his bike in order to finish the race. For some reason there was a complete absence of neutral service or any spare wheels on our second team car. Unfortunately, his wheel had already taken a battering. The proceeding 70km/hr attempted chase back to the peloton behind the car with a wheel vibrating like a washing machine was a character building experience to say the least. The Spanish marshals also took a dislike to my slightly less than legal technique of rejoining the race which resulted in me finishing in the grupetto that day.

Day 2 – Winter Work Pays Off
Blaines to Canet was a decidedly more successful experience. I was pleased to get to the start just to get out of our hotel. Cold showers and three guys packed into a room the size of an espresso cup hadn’t warmed me to the area. Our team Captain Christophe got in the days winning move so I just sat near the front and got in any move that tried to bridge the gap. As it happened, nothing worked so I finished up at the front in the first peloton. Unfortunately for our team, Christophe punctured with 5km to go so only managed 10th spot. On the positive side, I felt strong in all the efforts I made and finished feeling great, which indicates I’ve been doing the right work this winter. 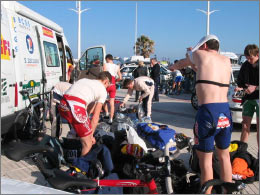 I know my Game-Boy is in here somewhere…

Day 3 – Nice Hotel Bad Weather
Following the race we packed up and drove to our base for the week in Rosas, Spain. A quality hotel with some great food certainly kept our spirits up for the next days racing. Come Monday morning though, the rain and cold left some of the team unammused. I ended up racing like a junior and missed the split. I was pretty annoyed with myself but I learnt my lesson. There’s no room for complacency in a bike race. My team-mate clearly kept his head screwed on and finished a respectable second. No comments about first loser please.

Day 4 – Recovery & Desserts
Tuesday’s promise of a ‘tranquil’ 2 hours of recovery somehow turned into a 3 hour batter round the roads of Northern Spain as everyone decided to prove how fresh they were. I was pleased I got those base miles in. I was recovering well. Some of the team decided that the ample supply of desserts at the buffet provided the best means of recuperation. See photo below. 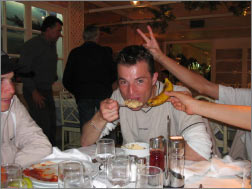 The life of a young pro – proof it really is desserts and fun.

Days 5, 6 – Epic Cols and Go-Karts
Wednesday was our fourth race of the week. It promised to be a killer over 3 sizeable cols with some smaller cфtes thrown in for good measure. It didn’t disappoint and the race blew up all over the road. I finished in a chasing group quite a few minutes behind the leaders.

Thursday turned out to be an epic 5 hour ride in the mountains back over to France followed by a return back into Spain along the coast road. We were all pretty battered by the end but still managed to summon up the energy to sample Rosas’ premier (ie: only) Go-Karting facility. Somehow we all came out of it in one piece. 14 young guys in Karts is pretty sketchy. 14 young cyclists competing like it was the Monaco Grand Prix is potentially deadly. Fortunately our excellent handling skills brought us out safely. Or so we’d like to think. 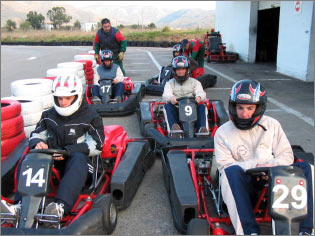 Following a 3 hour truly doucement (gentle) ride on Friday we all sped back up North to France. It was a quality way to start the season and best of all, I didn’t have to cook all week. 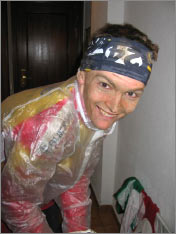 So What Did I Learn?
So this week really was an education. Even though it was a series of consecutive races so there was no GC, it was a good indicator of my capacity to recover. I’m pleased to say that right now I feel stronger than I did at the start! The races also taught me some really valuable lessons. Like my coach says, in a race you’re like a fighter pilot. You’ve got to maintain absolute concentration all the time. One lapse and before you know it your no longer spinning along in the top fifteen of the peloton, your hanging on in a cross wind at the end of a death line.

If an attack goes up the road and your thinking about joining it, it’s already too late. You have to listen for those tires sprinting up from behind and react instantly. That way by the time there coming by you can jump on their wheel. Otherwise you’ll have to expend a huge effort to get on their wheel and in the move. Maybe I had the legs to do that sometimes but it was an effort I should have saved for the end of the race. Also, in the last 30km when the pace starts to wind up in the peloton, you’ve got to fight like mad to stay near the front. Don’t worry about expending too much energy then. If you take it easy you’ll be out the back. Staying near the front also helps when avoiding the crazy amount of turning points and other
road furniture we seemed to encounter coming into the finishing towns.

I learned too many things last week to write down here but one of the most important reminders I got was just how much I love racing!

James rides with the CA Castelsarrasin team in the highest category of amateur team in France, DN1 Espoir. It is set up to aid the development of Under 23 riders. The team, its sponsors and support staff provide the opportunity and support to race successfully at a high level. The team is aided by the management and support of Didier Rous and Brioches La Boulangиre.