It’s called l’Enfer du Nord – the Hell of the North. The stone graveyard of cycling didn’t come by its name lightly. Built in ancient times to help horse-drawn carts cross the muddy farmland, the rough-hewn track has humbled many a would-be conqueror. If the Tour of Flanders is where legends are born, Paris-Roubaix is where legends are made. I was under no illusions as I prepared to tackle the road to Roubaix. 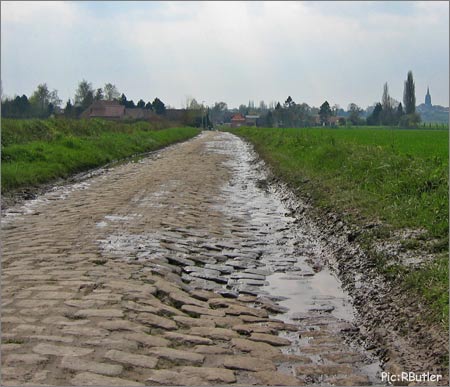 Good Morning Vietnam
Pfft-sssssss. I was pumping my tires in the parking lot of a chapel when I heard the valve blow. It was not a good omen. The slate grey sky hung so low you could bump your head. The near-freezing temperatures threatened rain and sleet. Bienvenue Paris-Roubaix.

We rode a few kilometers through a little village without seeing any sign of life. Peter Easton, chef de Velo Classic Tours, was first to put the hammer down. Go figure why he was accelerating like a kamikaze toward the first sector of pave but my instinct said follow. When I hit the bricks I was immediately flung toward the ditch, my bike chattering sideways across the mud-covered rockpile that would be my constant companion for the rest of the day.

Already our group was in tatters. I pushed on, trying to find my way across this ancient stone torture test that, for one day of the year, masquerades as a road. 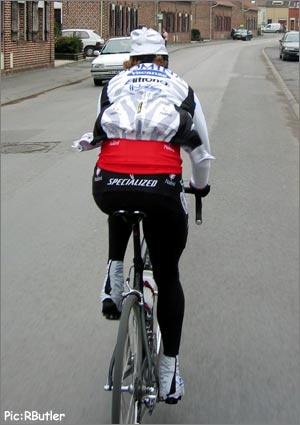 Domina Vacenze – Men At Work
I finally hit some pavement and found myself behind a Domina Vacenze domestic out scouting the route. I grabbed my camera from my pocket and tried to get a picture without hitting the deck at 40kph. Mission accomplished, I got down to the serious business of navigating la Foret d’Arenberg.

I slip-slopped my way across the oily pave, black mud on either side of the track. As I struggled to stay upright, an ancient Frenchman in a beret casually passed me on his one speed, baguette in tow. 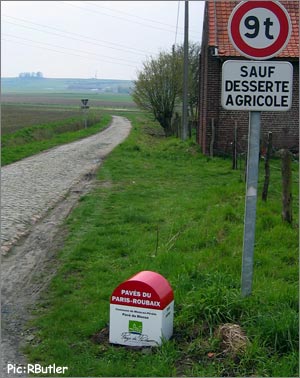 Welcome To Tombstone – Have A Nice Day
I cleared the legendary forest and checked my map. By this point I was alone. The Hell of the North is no place for a bike ride. I wouldn’t see another cyclist for the rest of the day.

The entrance to each sector of pave is marked with a tombstone – a cruel metaphor as the ancient deformed rock hammers away at your will to survive. The pounding is as relentless as the artillery barrages that scarred the region during two world wars. My chain slapped constantly against my stays while the brick rattled beneath my wheels. I waited for my Campy-equipped DeRosa to break. It didn’t. 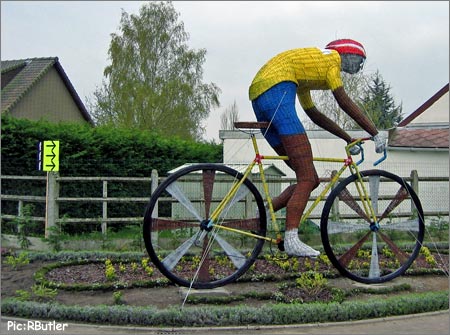 A Picnic With Lisa
I rode for hours without taking my eye off the enemy. I slowly came to the realization I was alone in the middle of a battlefield with only two spare tubes. My cell phone was useless. Even if someone could find me the route was impassable. It was about now I realized I was hungry and thirsty.

I passed through a small village and found the only cafй. “Est-ce-que je peut commander un sandwich?” ‘Desolee monsieur’ was the reply. My stomach growled and dry saliva ringed my lips. I jarred my way over two more sectors of pave and into the next town. The windows were shuttered and there was no sign of life. As I was leaving the village I spotted a roadside buffet – Lisa Easton of Velo Classic had saved the day!

I had just completed my sumptuous snack when Mr. Pez himself rolled into the feed zone and began tucking into a few Lu’s chocolate biscuits. ‘Don’t wait for me he said’ eyes laser-focused on four square feet of salami and cheese. I ‘d have to continue my battle alone.

I pulled myself away from the roadside mirage, objectif Roubaix.

To Be A Rock And Not To Roll
I pressed on but the fun was all but gone from this ride. The paleolithic sectors came more frequently and each seemed to be in worse shape than the last. By comparison, the pave in the Tour of Flanders had felt like ultra-glide.

I found myself recalling the legends of Roubaix. There was an eerie peace to it all. I was surrounded by miles of deserted farmland framed by a dull grey sky….and that pounding….the brick jolted me back to thinking about staying upright. This had become a test of will.

You try to pick a line around the most ominous chunks of protruding rock. No luck. Try the hump in the middle of the road. It bucks you down to the gutter where the stones are lined on end like a picket fence. Along the gutter there is a puddle every few metres. Some of them are deep enough to jam your forks into a headset busting compression as you struggle not to go over the bars. A water-filled ditch lurks alongside. I wondered what it would be like to ride this shoulder to shoulder at 40+kph.

Good Bye Muddy Brick Road
It was starting to get dark and I was getting lost. I had to double back twice before I found the sign for Roubaix and navigated my way to the velodrome.

I have ridden velodromes before – they weren’t like Roubaix. The concrete was cracked and gouged. It was loose and rattled like the pave when you rode over it in a final parting shot. I only did one lap.

I was soaked in sweat, wet from rainsqualls, and covered in mud. I didn’t feel my legs. But the pain in my hands, elbows, shoulders and knees would remind me of the Hell of the North for the next week.

My phone rang. It was the Pez. ‘Where are you?’ he asked. “I’m in the velodrome – come get me”. I was pleading…bloodied, but unbowed. 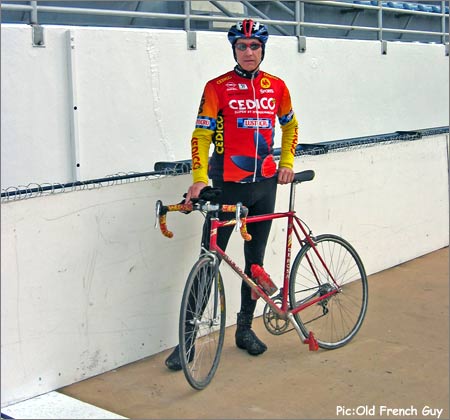 See More info on this and other great travel ideas in the PEZ Travel & Tours Section.