Pez hit cyberspace ten years ago, and one of the first regular features was Toolbox, the weekly series offering objective, scientifically driven training and fitness advice. At the helm of Toolbox since its inception has been Dr. Stephen Cheung, who is just about to publish Cutting-Edge Cycling, his book on the science of cycling. We talk with Stephen and co-author Hunter Allen for a preview of what to expect.

When Pez first launched in 2002, one of the first to click on the “Writers Wanted” was Dr. Stephen Cheung, then a Professor at Dalhousie University. Stephen’s pitch to Pez was pretty simple: “I want to write about using science to improve our fitness and riding, and I want to make science practical and relevant for cyclists.” From that time, Stephen has guided Toolbox and a crew of talented coaches as a regular Tuesday feature on Pez, with over 500 articles on training and fitness.

Back during his first sabbatical in 2004, Stephen first got the inkling to put Toolbox into book form. Now, with Cutting-Edge Cycling from Human Kinetics, Stephen has partnered with top coach Hunter Allen to put together a book all about the science of cycling. The book features both the latest scientific findings along with practical knowledge geared for your own training or your next workout, and will be landing at your local bookshelves in late April or available for pre-order as a signed copy. We caught up with Stephen and Hunter for a preview of Cutting-Edge Cycling. 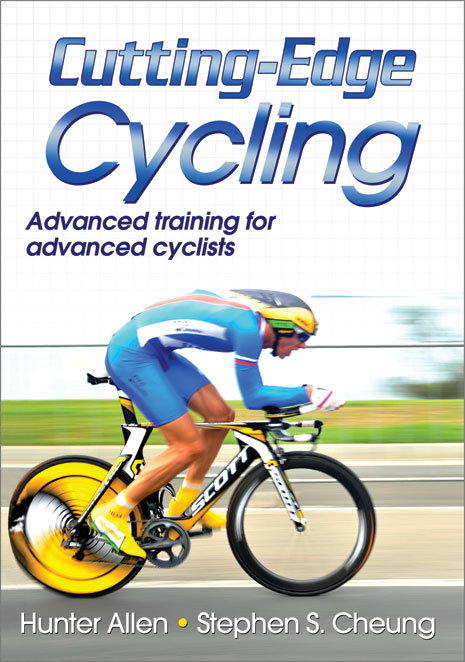 Pez Stephen, you’ve been Toolbox Editor for 10 years now with Pez. Is this book a culmination of that work?

Stephen Both no and yes. No in that Cutting-Edge Cycling is not simply copying and pasting all my Toolbox articles and binding it up into a book. I wish it was that simple! I have used some articles and ideas as starting points or parts for different chapters. For example, I’ve written a lot of Toolbox articles on pedaling dynamics and pacing strategy, so some of those articles obviously are woven into the book. However, it’s pretty much a completely new piece of work in almost every respect.

But yes in the sense that it takes the same philosophy that I’ve always striven for in Toolbox: examine the latest science relevant to cycling, explain it in an accessible manner, and then apply it into practical recommendations that you can actually use in planning your training or on your next ride. That’s where the collaboration with Hunter has been great. He’s taken the science and provided clear applications. For example, in the chapter on recovery, I go through the science of overtraining and “Functional” versus “Non-Functional” Over-Reaching (FOR and NFOR). Hunter’s provided templates for how to achieve FOR, which is what we want, while also demonstrating how to distinguish a state of NFOR, which we don’t want, and how some athletes have recovered from it. 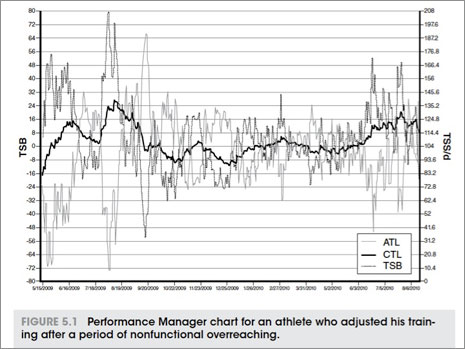 The book integrates the current consensus knowledge on overtraining with concrete examples of what it looks like.

Pez Hunter, you already have a very successful book in “Training & Racing with a Power Meter.” What prompted you to write this book and what’s different about this one?

Hunter I really enjoy educating cyclists about training and I get so many of the same questions over and over and this book is really meant to do some “myth busting” along with answering some of those training questions that I get daily. Stephen is such an incredible writer and it was a lot of fun working on this with him. We struggled at points throughout the process in how to best present the information, and through those struggles came up with some amazing ideas and how to present them clearly, concisely and in way that makes them easy to understand. 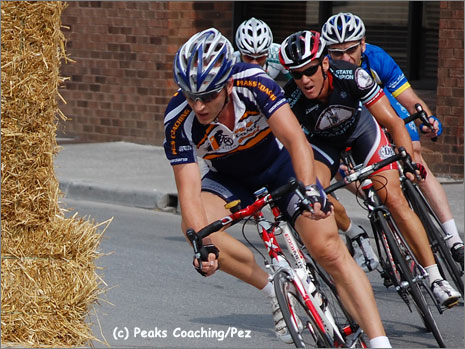 Hunter showing the riders behind how to put the scientific rubber onto the road!

Pez The theme of the book is an “evidence-based” approach to cycling. Can you tell me what that means?

Stephen The thing we find funny is that cyclists love to get into the “facts” about the material side of the sport. How light, stiff, or aerodynamic is this frame or wheel? They want hard data or evidence with their equipment. In contrast, many of these same cyclists will simply accept anecdotal evidence or follow what everybody else is doing concerning training or fitness without looking at the evidence from scientific studies.

What we mean by an “evidence-based” approach is to really carefully examine the scientific literature to guide our thoughts and training. Yes, there are definitely limits to what a typical scientific study can or cannot do, because no one study or even a group of studies can definitively answer a question. Indeed, the strengths and limitations of science is actually the primary focus of our first chapter. 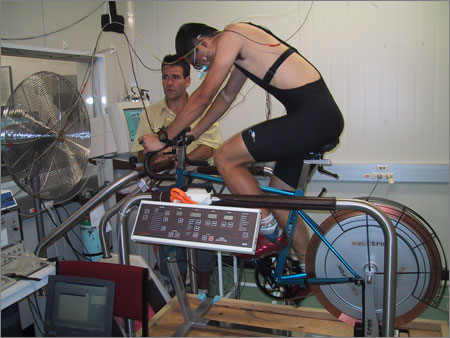 Stephen walking the walk by putting some science into action.

Pez What chapter are you most excited about?

Stephen Even though I’ve written a number of Toolbox articles on the topic, I personally learned the most in the chapter on pacing strategies. Hunter brings up the great concept that, in a way, all of training and periodization is pacing on a very macro scale – how you pace your effort over the course of a whole year or even career. For me, the chapter was a chance to really dive into the latest ideas and debates about warming up and pacing for different events, and to try to create a summary of what’s out there.

Hunter Great question and one of my favorites is the one Stephen wrote about “Preventing overtraining and enhancing recovery.” There is so much mis-information about overtraining, overreaching, fatigue and he makes it so simple to understand for cyclists, coaches and anyone that trains in any sport. I really look forward to hearing some of those terms within the common jargon of cyclists in the near future. 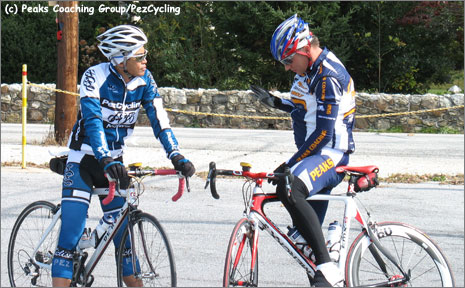 Stephen and Hunter in a writing meeting, debating the finer points of the book.

Stephen Sport science isn’t just for the pros or the racing crowd. I think the target audience is anybody who wants to increase their enjoyment and performance on the bike. Even if you never intend to race, I think simply being more fit and riding better/faster is just plain more fun. So the principles of this book can be applied and adapted by everybody, from the hard core racers to riders who want to learn more about how to pace themselves over a century or Gran Fondo ride. 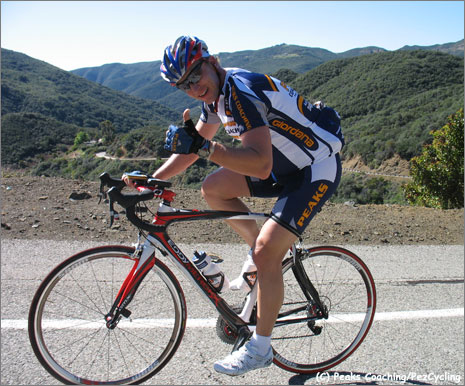 Any time you can ride faster or enjoy the bike more, that’s always a good thing in Hunter and Stephen’s view.

Pez What’s the biggest thing you want readers to take from this book?

Stephen That there are real and concrete improvement that you can gain by using science to guide your training. I think people in general don’t see how science relates to them on an everyday level, and I hope that this book can show cyclists how to integrate science with their own trial and error in improving their enjoyment of cycling.

Hunter As a cycling coach, I always want riders to improve whether that is for a Saturday group ride, Gran Fondo event, the Tour De France, or just racing in the local criterium. I hope that the material we cover will make a difference in their cycling and help them improve. 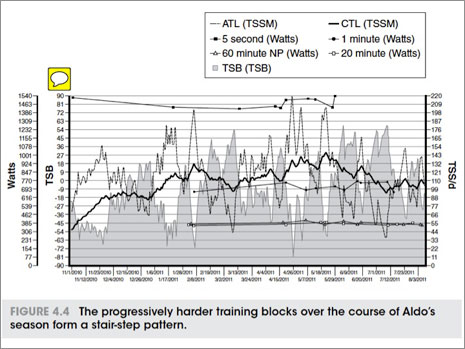 The book incorporates both scientific principles and also actual training examples, in this case dissecting Aldo Ilesic’s buildup towards the Tour of California as an example of periodization.

Pez Tell me about one new thing you’ve learned about cycling in the process of writing this book.

Stephen Every one of my studies in my lab reinforces in me just how adaptable and versatile the human body is. That was definitely the case writing this book.

Hunter The amazing amount of scientific evidence that is out there on endurance sports is just staggering. It’s hard to go through it all and figure out what is worthy and what should be cast aside.

Pez A unique part of the book are the interviews with top sport scientists in each chapter. What did you learn from these interviews?

Stephen As a scientist, one of the best things is debating ideas and learning from my colleagues, so I really liked the interviews for that. For me, probably the biggest twist that got me thinking was the interview with Lars Nybo from Denmark on heat stress. Even though that’s my own primary area of research, Lars pointed out how cyclists can actually use heat and hot temperatures as an ergogenic aid, which I had never thought of before but which makes completely obvious sense. And the scientific interviews aren’t just pointy-heads talking theory either, the London 2012 organizers are actually cranking up the heat inside the velodrome – read the book and find out why!

There you have it. A top scientist and coach pair up to give you the latest scoop on how to translate scientific findings into better performance on the bike. Should be a good read, and we’re looking forward to reviewing it here on Pez. 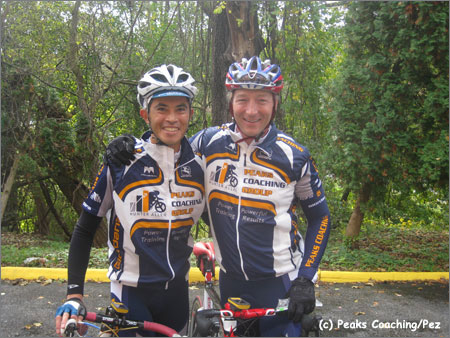 Cutting-Edge Cycling will be hitting the local bookstores in mid- to late-April. However, you can pre-order a signed copy through Peaks Coaching Group for delivery in the second half of April!

Hunter and Stephen will be presenting a free webinar about Cutting-Edge Cycling on March 20 at 8 pm Eastern Time US. You can register here.

Hunter will be at the Tour of the Battenkill April 13-15 for a book signing, while Stephen will be book signing in southern Ontario at Paris-Ancaster April 14-15, along with other book signing events in Niagara, Ontario; London, Ontario at the Forest City Velodrome; and with the Midweek Cycling Club in Burlington, Ontario. Contact [email protected] for more details.

Toolbox: Simple is as Simple Does