In the Northern Hemisphere, Spring is about to break out, and a young cyclist’s fancy naturally turns to shapely, uh, lugs. We’ve seen the Daily Distractions, and now we have a book chock-a-block with fine forms of a different kind… the glossy centrefolds of Custom Bicycles.

While there have been many useful innovations such as pneumatic tires and variable shifting, today’s diamond-framed bicycle would remain recognizable to those who participated in bicycling’s first Golden Age. In that earlier time, bicycles moved from being the products of small blacksmith shops to those of mammoth, vertically-integrated industrial concerns.

Today, most popular bicycle brands, including more than a few celebrated European names, are churned out in large quantities in the Far East. Halo products follow the old car industry adage of “race on Sunday and sell on Monday” as marketing focuses heavily on racing. Specialized, Giant, Trek, Cannondale and the other big firms all sell replicas of pro team bikes for Boonen-wannabes. 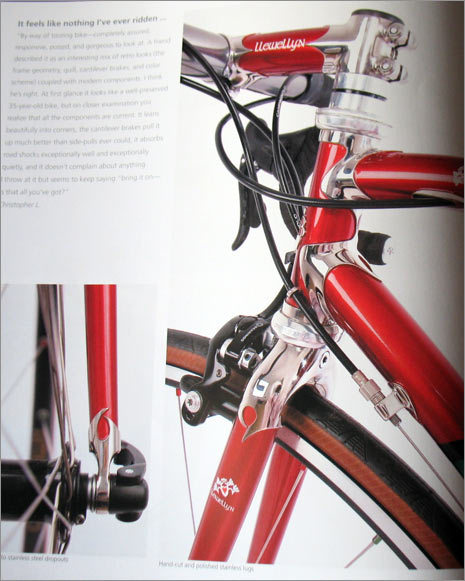 But if your interest lies in another direction, away from the anonymity of a team bike made by talented but invisible factory hands, we just might now be in another Golden Age. The growing popularity of the North American Handmade Bicycle Show (See the PEZ-Report here), along with that of Cirque du Cyclisme, suggests that there is a flourishing sector far beyond the mainstream: that of the hand-crafted custom bike. And to mark this trend, Australia’s Images Publishing has produced a gorgeous new book, “Custom Bicycles: A Passionate Pursuit,” by Christine Elliott and David Jablonka. This publisher specializes in books on architecture and design (with a foray into books on Aston-Martin and Bugatti cars) so this is bikes as objets d’art. 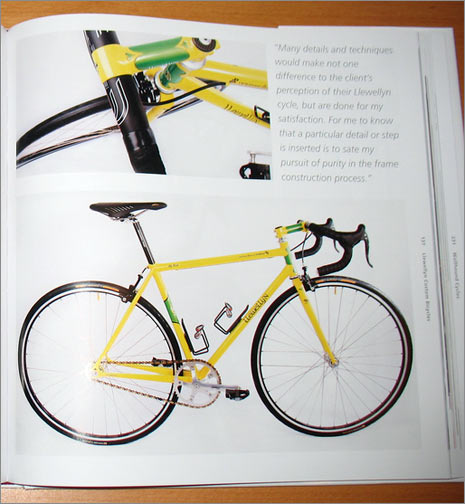 The book is itself beautifully designed, with a clear layout, excellent detailed photographs and a great deal of colour. It begins with a short introduction by Phil Liggett, who states “Having raced for 12 years and reported on the Tour de France for 37, to me there is nothing kinder to the eye than a bicycle.” And the authors then proceed to prove this through their selection of 39 custom framebuilders. These builders come from Australia, Canada, France, Germany, Italy, the United Kingdom and, predominantly, the USA and their backgrounds are very diverse. Their places of work range from modern factory buildings to narrow workshops to, well, half a garage. What unites them is both an aesthetic sense–the bicycle as artwork, a vehicle of self-expression–and a truly astonishing level of skilled craftsmanship.

They are companies named for their founders, often the person with the torch in hand (Richard Sachs, Bob Brown, Bruce Gordon, Steve Potts, Dario Pegoretti), and if not then an entity inseparable from its founder, as in the case of Vanilla Bicycles and Sacha White. Many are the sole employees. Each chapter explains briefly how the builder got into the profession and his or her philosophy, then there are those superb photos, followed by some customer comments. There is not a lot about what it is like to actually ride these bicycles but all that vertically-compliant-but-laterally-stiff talk would be out of place here anyway. What is more important here is the idea, something jointly worked out between client and builder, and the realization of a unique bicycle that comes from this relationship. 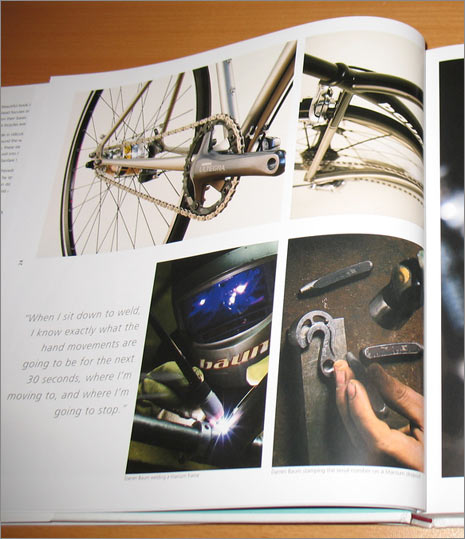 There are many featured builders working in titanium, a difficult and demanding metal with special qualities. Then there is the beauty of lugged steel, and the examples here include fine bikes from, among others, Richard Sachs, Cycles Alex Singer, Uwe Marshall and Bill Davidson. Having seen his handiwork at Cirque du Cyclisme in 2007, I remain impressed by Darrell McCulloch’s Llewellyn bicycles. The cover photograph depicts a retro Vanilla (with fenders!) built by Sacha White on a commission from collector Brett Horton (with more photos in the Vanilla chapter) that is truly memorable in its sea-foam colour. There are bikes that are meant to be entertaining: Don Walker’s polka-dotted track bike, or Craig Calfee’s bamboo bike with real bullhorn bars, and the startling offerings from Roark. The last-named is a three-man shop working inside of an aerospace company–the Wright Brothers in reverse.

Criticisms of the book? Although the frames are beautiful, it would have been nice to see more photos of the completed bikes (yes, I know that Campy Record looks like Campy Record on every bike) and more specific comments on the bicycles pictured. And as a sensitive Canadian, I see that (probably for reasons of layout) “Canada” was omitted from the back cover list where the different countries of the framebuilders are set out, although Naked Bicycles and Guru are featured in the book. 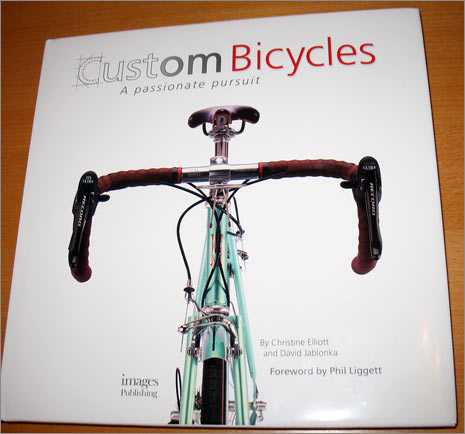 The pleasure I had leafing through this book reminded me of when I had my own custom-built bike constructed. The bicycle is one of the few industrial products in this modern age we can buy that can be built to our exact specifications–dreams given tangible form. While not inexpensive, custom bikes are often surprisingly competitively priced with high-end factory bicycles that have big marketing budgets, racing teams and establishments to pay for. Not all of us can get onto the multi-year waiting list for many of these builders, but if you love the beautiful simplicity of bicycles then “Custom Bicycles: A Passionate Pursuit” is an excellent way to gain an insight into why those waiting lists exist in our age of instant gratification. As Louis Nizer said: “A man who works with his hands is a labourer; a man who works with his hands and his brain is a craftsman; but a man who works with his hands and his brain and his heart is an artist.” Here is artistry on display.

About Les: When not aching for streets without grit and slush that mean he needs to clean his bike for longer than he rides it, Leslie Reissner can be found asking for a government rescue package to pay for a Llewellyn frame at www.tindonkey.com.