The Tour is over, the Back to School sales have begun. This can only mean one thing: time to think cyclocross. At least that’s the thinking of cross nuts like Pez’s Steve Frothingham, who just handed in his summer reading book report on the new edition of Simon Burney’s classic, Cyclocross.

Steve says Burney has updated the venerable ‘cross bible from top to bottom. It might not be sacrilege to call it a NEW testament.

Somewhere among many household moves, I lost my first edition of Simon Burney’s Cyclocross, a book I remember for its black-and-white photos of toe-clipped racers and somewhat baffling descriptions of ‘cross dismounting and remounting techniques. For too many years, Burney’s literary effort was the only English-language source for information on ‘cross racing. And while sales have been steady as ‘cross has gotten more popular in recent years, a modern update was much needed. 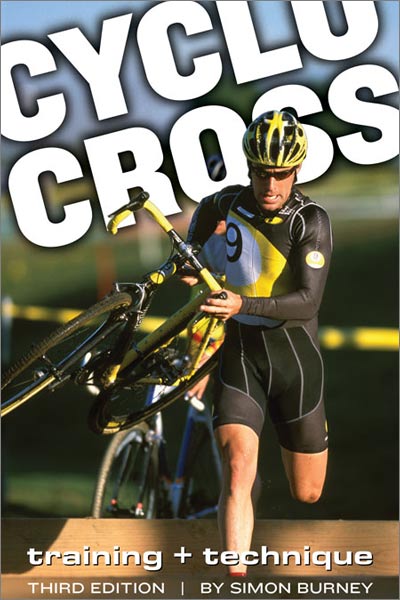 With so few other cyclocross books on the market – ok, with NO other cyclocross books on the market –Burney is left with the opportunity, and burden, of being all things to all readers. He has to appeal to readers with little or no ‘cross experience and be useful to more experienced racers. He has to accommodate readers of all ages, abilities and sexes in the UK, Canada and the US.

So Burney provides a full overview, from the early history of the sport to the equipment needed (down to his favorite type of bucket to use in the pits) to an 11-page appendix of World Championship results going back to 1997.

Burney’s prototypical ‘Imagined Reader’ seems to be a European-based elite amateur with a spare bike or two, a coach, a mechanic/assistant and a day job. This is perhaps a vestige from previous editions. But the new edition provides advice for women, juniors, and cross-overs from mountain bike or road bike racing. There is no doubt that all racers or potential racers will find something of interest and value in Cyclocross.

But the all-encompassing approach is not always successful. For example the detailed overview of the sport in the introduction can be tedious for anyone not seeking an advanced degree in ‘crossdom. And Burney sometimes forgets his North American readers, as when he mentions that the Christmas week is a great time to get in some racing (it is, if you live in Belgium).

And although Burney knows the elite American racers, he seems to have little familiarity with the grass roots ‘cross scene in the US and Canada, which provides the foundation for elite racing on this continent.

In North America, amateurs, especially masters, support ‘cross. Their entry fees, not spectator ticket sales, make races possible. The result is a decidedly different, laid back, sometimes “alternative” feel to the events. Even top racers don costumes for Halloween weekend races. San Francisco’s Cyclo-Cross-Dress series (“it’s not called ‘cross’ for nothing”) is one of the best-attended series in the country — just to give you an idea.

A typical North American ‘crosser is a 39-year-old, not-too-elite male with some road and mountain bike racing experience, a day job, a couple kids, one ‘cross bike and no pit crew.

Me, in other words.

So is Burney talking to me in this book? Much more so than in his previous editions, which seemed very foreign to me. His technique sections are improved with new photos (many featuring Tim Johnson), and his equipment advice is knowledgeable, specific and opinionated, just how I like it. I won’t miss the old edition; but I suspect I will turn to the new book many times this coming season.

Finally, it’s not clear whether Burney is sincere or trying to flatter readers like me when he bets that an American elite racer will win a cyclocross rainbow jersey, on American soil, in the next decade.

What Burney might not recognize is that Americans are unlikely to leave the sport unchanged, if and when they take a leading role. So while an American ‘crosser might don a rainbow jersey in the next decade, there’s no telling what else he (or she) will be wearing.