One does not really expect a book about one of the most storied names in Italian cycling, famous for quill stems and cork handlebar tape, to begin with a discussion featuring a British fashion designer but when that designer is bike-mad Paul Smith and he is chatting with Antonio Colombo of the famous tubing dynasty you know that the way ahead will be eccentric, to say the least. “Cinelli” is an impressive and expensive book but just be prepared for a wild ride. 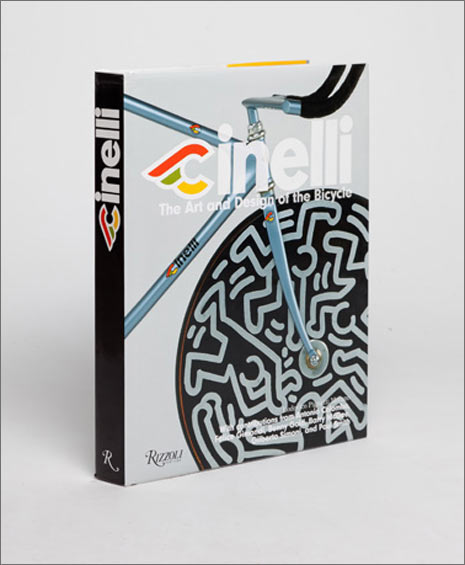 Published by Rizzoli, famous for its beautiful art books, “Cinelli” is not anything like your usual bicycle history but is truly another art book. It is superbly designed, of course, like many bike books are but the content much more addresses aesthetic issues rather than technical ones. There is a mix of history, usually respectful, with matters of texture and quality, perhaps a big dose of fashion-world pretense but also some genuine humour. There is a generous selection of excellent photos, marvellously sharp and evocative, no matter which era represented.

The book opens with aforementioned kind-of-interview between the Clothing Man and the person who turns out not to be Mr. SLX Tubing but rather the Mr. Bicycle of the Art World. Antonio Colombo’s family business, Columbus Tubing, goes back to 1919 and he also serves as President of Cinelli, acquired by the family in 1978. The book is split into chapters that do not go in chronology but rather each highlight a different aspect of the company’s surprisingly diverse product line. It is telling that one of the first things done by the Colombos was a redesign of the archaic Cinelli logo in 1979. The “winged C” is a superb example of a successful redesign and this look and feel began to breathe new life into Cino Cinelli’s atelier.

“In the bicycle, Colombo saw an object of design, technically perfect, the most efficient mode of transportation ever invented, which nevertheless seemed unable to communicate to the general public its greater modern social potential. One of his first decisions as majority shareholder of Cinelli was to commission a new logo that would reflect his vision of the bicycle as a dynamic and progressive social element.” 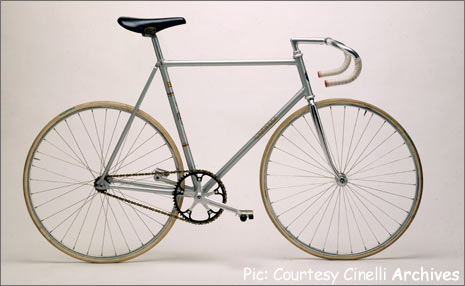 A Cinelli Supercorsa Pista from the 1960s

After this call to arms in the opening chapter, Lodovico Pignatti Morano, the author, goes backwards into the traditions of the past by introducing Cino Cinelli’s masterful racing frame, the Supercorsa. The Supercorsa was produced in very limited numbers as a sideline to Cinelli’s role as the largest supplier, along with Campagnolo, of bicycle components in Italy. Supposedly built at a loss but to the Master’s exacting specifications, the new regime began a program that started with colour and transfer changes and then went on to using new techniques and tools for frame construction as the Supercorsa was improved. It had been brazed by one expert, Luigi Valsassina, until 1980, and he too is shown in the book at work. This is Old School, as the Young People say.

From the legendary Supercorsa, which was built first in 1948 and continues in production to this day, we move next into the bits and pieces that have made the Cinelli name so visible, beginning with the revolutionary (at least for the diehards of the cycling industry) sloped fork crown, beautiful investment cast lugs, the remarkable Unicantor saddle that is considered the basis of the modern racing saddle—all these come from Cino’s era, along with the famous 1A alloy stem and the 60-series of handlebars and distribution of Binda straps. But post-Cino stands a company enthusiastic about experimentation. The designs are novel: the clever and controversial Spinaci time trial bars; the impressive Alter threadless stem, with its pin-up girl cover (as used by Mario Cipollini, naturally); the much-loved cork handlebar tape; the integrated handlebars (Integralter and RAM). 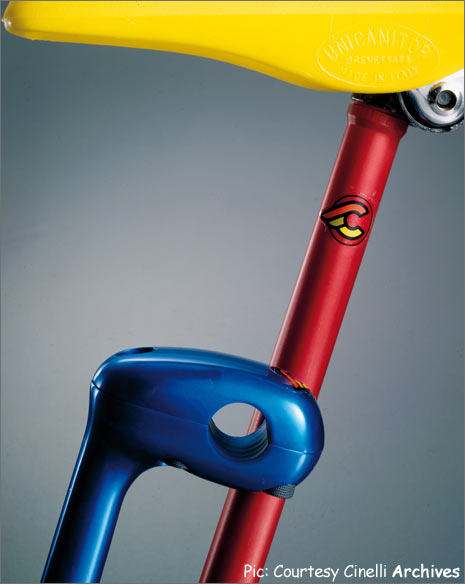 Antonio Colombo not only oversees this circus of invention but also owns an art gallery. He recounts meeting Gary Fisher in California and hanging out with him at a Grateful Dead concert. With the Rampichino the company launches Europe’s first mountain bike, limited to 1000. Perhaps making more than that number would have made good commercial sense but one senses that mass production is not really the style of Cinelli. Style is the style, and Colombo is clearly excited by the trendy fixed gear scene, although he is rebuffed by one group of American riders who consider Cinelli’s Bootleg model “a project for Milanese dandies, too aestheticized and conceptual for their taste. A lesson learned.”

It is strange to think of an industrial producer in Italy wanting to come to grips with the “authenticity” of the urban cyclist movement. “The fixed-gear movement, more than any other in cycling history but much like other urban subcultures, articulated a self-conscious aspiration toward ironicity…” Well, okay, if the result is a clean and attractive design like the Vigorelli track frame.

Says Signore Colombo: “If you’re going to buy a performance bike, it might be that you’re less interested in the symbolic value of the bicycle. But for me and my customers, a bicycle is more than in instrument of performance, it’s a complex of things. I am to introduce, beside the ride-ability and the performance of a bicycle, more value—sometimes an ironic value. Not always being 100 percent high-tech; high-tech is worrying somehow. But that’s why I play sometimes—like the smiley faces on our Vigorellis.” One can be fairly certain that Mr. King Liu of Giant in Taiwan does not talk like this.

The book is peppered with paintings illustrating some fanciful notions about Cinelli (how about “Shakti Cinelli,” featuring the Hindu goddess, perhaps?) and it is clear that everyone is having a lot of fun with all of this. Well, the Spinaci episode was probably not so much fun after a new factory was built and then the handlebars were subsequently banned by the UCI, but it seems that a torrent of interesting ideas continues to flow from what Cino’s old company. At one point there was even a mini-chain of three shops, prefiguring what has since become the “concept store” for high-end bike manufacturers. Some chapters feature comments by other people with a connection to Cinelli, including racers Felice Gimondi and Gilberto Simoni, but also artists Barry McGee and Benny Gold. 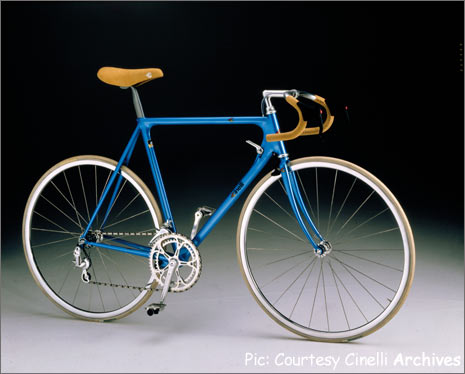 There are several chapters devoted to the remarkably gorgeous Cinelli Laser bicycle, which from its 1981 origins onwards appears almost two-dimensional and beautifully proportioned in new ways far beyond what the inventors of the diamond frame might have considered. And the book ends, appropriately, with the mixing of industry and art with the Laser painted up by graffiti-inspired artist Keith Haring, a bike that Antonio Colombo says everyone wants their picture taken with. It features on the cover of “Cinelli—The Art and Design of the Bicycle,” a book which delivers what it sets out to do in its title.

• Buy it on Amazon.com

When not constantly scrubbing clean the white Cinelli cork tape on his Marinoni, Leslie Reissner may be found being a victim of fashion at tindonkey.com.
Like PEZ? Why not subscribe to our weekly newsletter to receive updates and reminders on what's cool in road cycling?

The Making Of The 2013 Darrell Parks Calendar